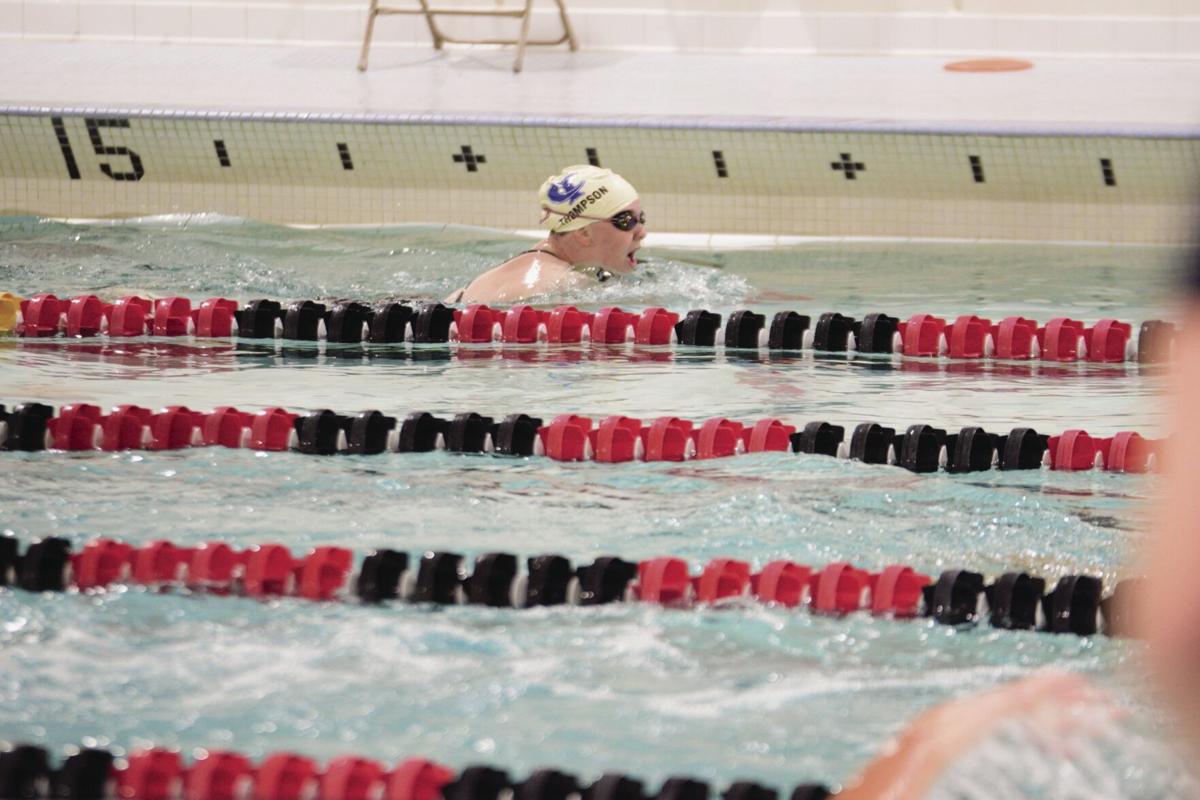 Cambridge-Isanti sophomore Cassandra Thompson competes in the breaststroke in the Bluejackets’ meet at Monticello on Thursday, Oct. 1. Photo by Jared Hines 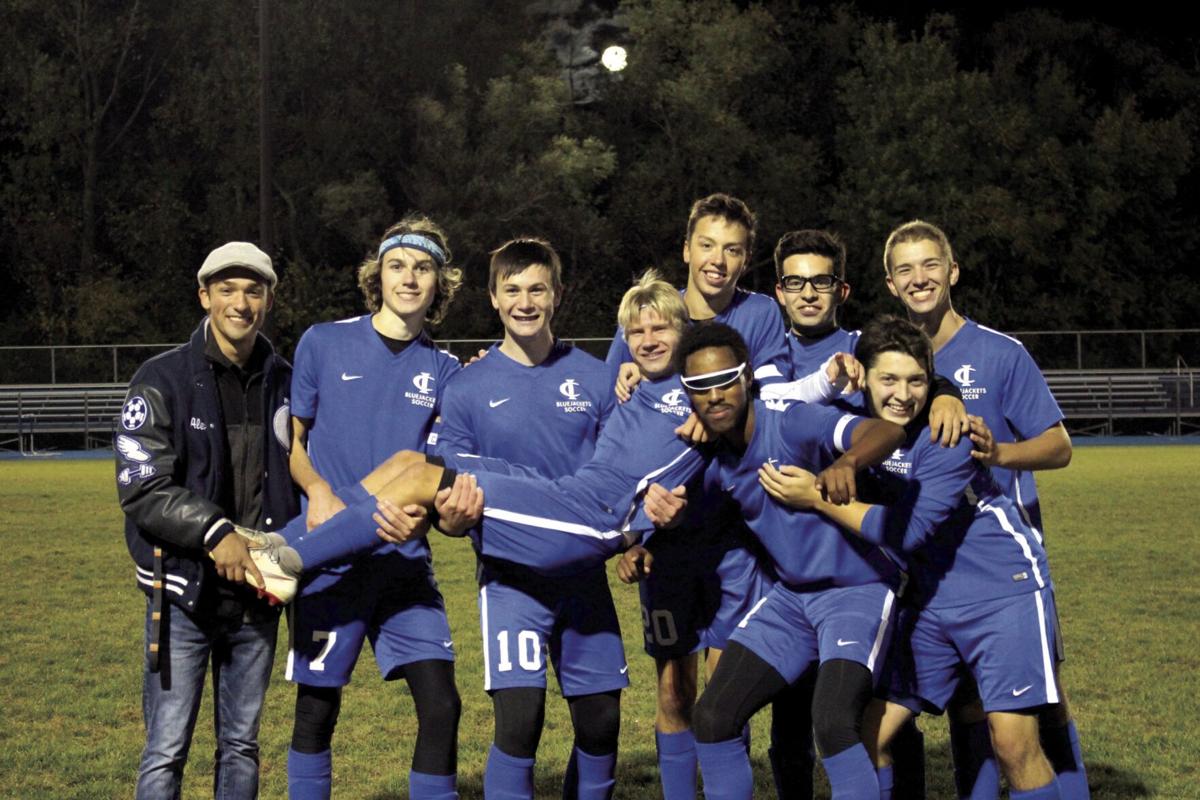 The seniors on the Cambridge-Isanti boys soccer team pose for a photo after being honored at halftime of the Bluejackets’ win over Big Lake on Thursday, Oct. 1. Photo by John Wagner

Cambridge-Isanti sophomore Cassandra Thompson competes in the breaststroke in the Bluejackets’ meet at Monticello on Thursday, Oct. 1. Photo by Jared Hines

The seniors on the Cambridge-Isanti boys soccer team pose for a photo after being honored at halftime of the Bluejackets’ win over Big Lake on Thursday, Oct. 1. Photo by John Wagner

The Cambridge-Isanti boys team was slapped with a pair of bad breaks at the start of its Senior Day contest against Big Lake on Thursday, Oct. 1.

The Bluejackets had a goal early in the contest called back by an illegal throw-in, and soon after that the team failed to convert a penalty kick, hitting the crossbar with the shot.

“I thought we were jinxed,” C-I boys soccer coach Joe Kassa admitted. “But our guys kept playing hard, kept fighting. And it worked out for us.”

The Bluejackets eventually hammered the Hornets 6-1, scoring three goals in each half. And Kassa said he liked the never-say-die attitude of his team.

“The seniors knew they wouldn’t play on this field again, and they really wanted to go for it,” he said. “Our kids were ready. And once we scored a goal or two, we were able to play a little more free and open. We weren’t as tense, and we really got it rolling.”

Cambridge-Isanti got goals from Alex Simpson, Alek Loehlein, Josh Foley, Andrew Head, A.J. Nelson and Erik Kindem. Kindem, a senior, started in goal and made six saves before coming out of the net, wearing a forward’s jersey, and scoring his goal in the final moments.

Kindem’s replacement as goalkeeper, Cordell Strombeck, stopped a pair of shots, and Big Lake’s only goal came on a penalty kick after a foul in the box.

“I think the defense has really turned it on in the last three or four games,” Kassa said. “I think we have developed some chemistry on defense. Early in the year we had a lot of people rotating in because of injuries and such, and about midway through we got everybody back.

“We’ve started to figure out who we need to cover, how we need to work together. And as a result, things got a lot more solid back there.”

Last week North Branch had a tough week, earning a scoreless tie with St. Francis on Tuesday, Sept. 29, before losing at Chisago Lakes 2-0 two days later. But the Vikings finished fifth in the Mississippi 8 with 15 points earned through a 4-4-3 record.

The North Branch girls soccer team suffered a 3-2 loss to St. Francis on Tuesday, Sept. 29. Lilly Johnson and Ava Gerten scored the goals for the Vikings, who are 5-3-2 in Mississippi 8 play and are tied for fourth in the standings with 17 points.

North Branch will finish the regular season at Chisago Lakes on Thursday, Oct. 8.

Braham’s boys and girls teams continued to show improvement as they prepare for the Great River Conference Cross Country Championship to be run at Hinckley on Wednesday, Oct. 7.

The boys lost a razor-thin 27-28 race to East Central at Isle on Thursday, Oct. 1. In that race seniors Isaiah Lancrain (20:42) and Kevin Laman (21:20) led the Bombers by finishing second and third, respectively, while freshman Ben White placed sixth with a 22:10 clocking.

The girls lost to East Central 17-38. Eighth graders Addy White and Ava Johnson led the Bombers, finishing sixth and seventh, respectively with times of 26:46 and 26:49.

“It was our first home meet in a couple of years,” coach Norm Nagel said. “It was nice to see us run at home and in front of our fans. It also was the first time we ran at Sunrise River Elementary School, our new course location. It was a great preparation run before the conference meet.”

In the boys race, Becker won with 21 points, while St. Francis was second with 46 and North Branch was third with 69. Junior Zachary Johnson led the Vikings, placing 12th with a time of 19:16.2, while fellow juniors Alex Dick and Justin Kormedy finished 14th and 15th, respectively.

In the girls race, Becker swept the top five places to win with 15 points, followed by St. Francis (59) and North Branch (64) in a tight battle for second. Seventh grader Evelina Gilkerson led the Vikings by placing eighth with a time of 21:56.9, while eighth grader Dakota Esget took 11th with a 22:19.8 clocking.

Both North Branch and Cambridge-Isanti will run in the Mississippi 8 Conference championship hosted by Becker on Thursday, Oct. 8.

Cambridge-Isanti suffered a 98-80 loss at Monticello on Thursday, Oct. 1.

Cambridge-Isanti finished the regular season on a high note by winning both matches it played last week.

The Bluejackets opened the week with a 7-0 sweep of Big Lake on Tuesday, Sept. 29. On the singles side, C-I lost just six games to sweep as Chloe Hajek won at first singles, Ashley Ladd was victorious at second singles, Ava Lowman took the win at third singles and Natalie Randall claimed her match at fourth singles.

On the doubles side, Sarah Baker and McKenzie Rafftery won at first doubles, Maddie Lawrence teamed with Keziah Bulabon to win in three sets at second doubles while Ashleigh Ruppert and Grace Schoeneck won at third doubles.

Two days later the Bluejackets claimed a 5-2 victory over North Branch in the final regular-season match for both teams.

Lowman and Randall won in straight sets at third and fourth singles for the Bluejackets, while Ruppert teamed with Maddie Troolin to win at third doubles.

Sophie Smith and Hollie Ohnsorg won at No. 1 doubles for the Vikings, as did Miaya Volkman and Rachel Wurdemann at second doubles.

It was a tough finish to the regular season for North Branch, which opened the week with a 5-2 loss to Chisago Lakes on Tuesday, Sept. 29. The two winners for the Vikings came in singles as Volkman won in straight sets at third singles while Rossini claimed a straight-sets victory at fourth singles.

The Cambridge Christian volleyball team posted a come-from-behind five-set victory at Chisago Lakes Baptist on Tuesday, Sept. 22. The biggest comeback came in the fifth set as the Warriors overcame an 11-1 deficit to win the set and the match by a 16-14 score.

“The match was so intense and exciting,” Cambridge Christian coach Rachel Newton said. “It was some of the best volleyball my team has played this year. We were tenacious and aggressive while also maintaining a positive and confident attitude.”

Cambridge Christian lost to Willmar in three sets on Friday, Oct. 2. Kaitlyn Bonkoski led the Warriors with three kills and a pair of service aces, while Raelynn LaBeau added 13 digs and two aces as well.

“It was a tough match,” Newton said. “We just couldn’t get any traction and struggled with our defense.”