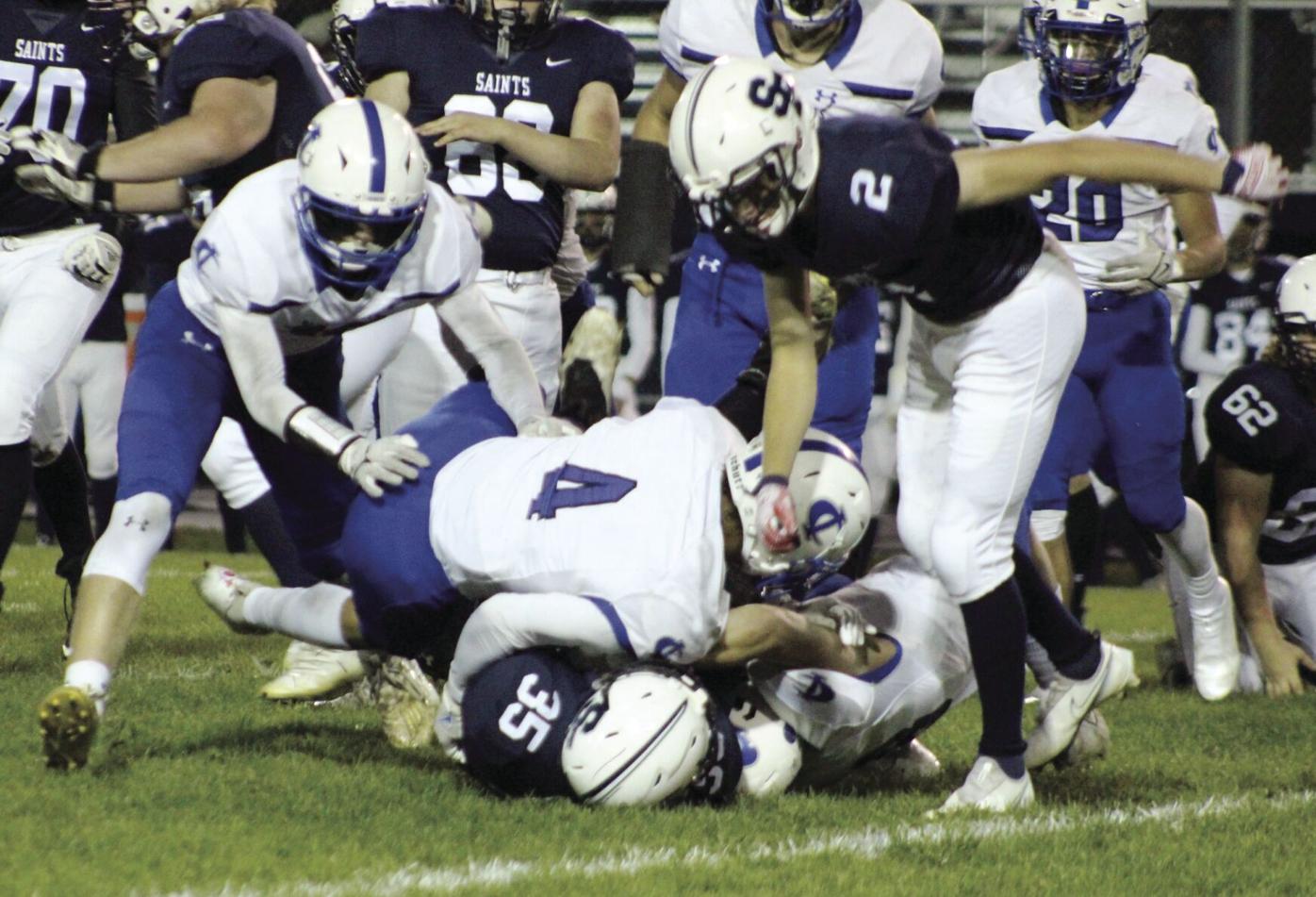 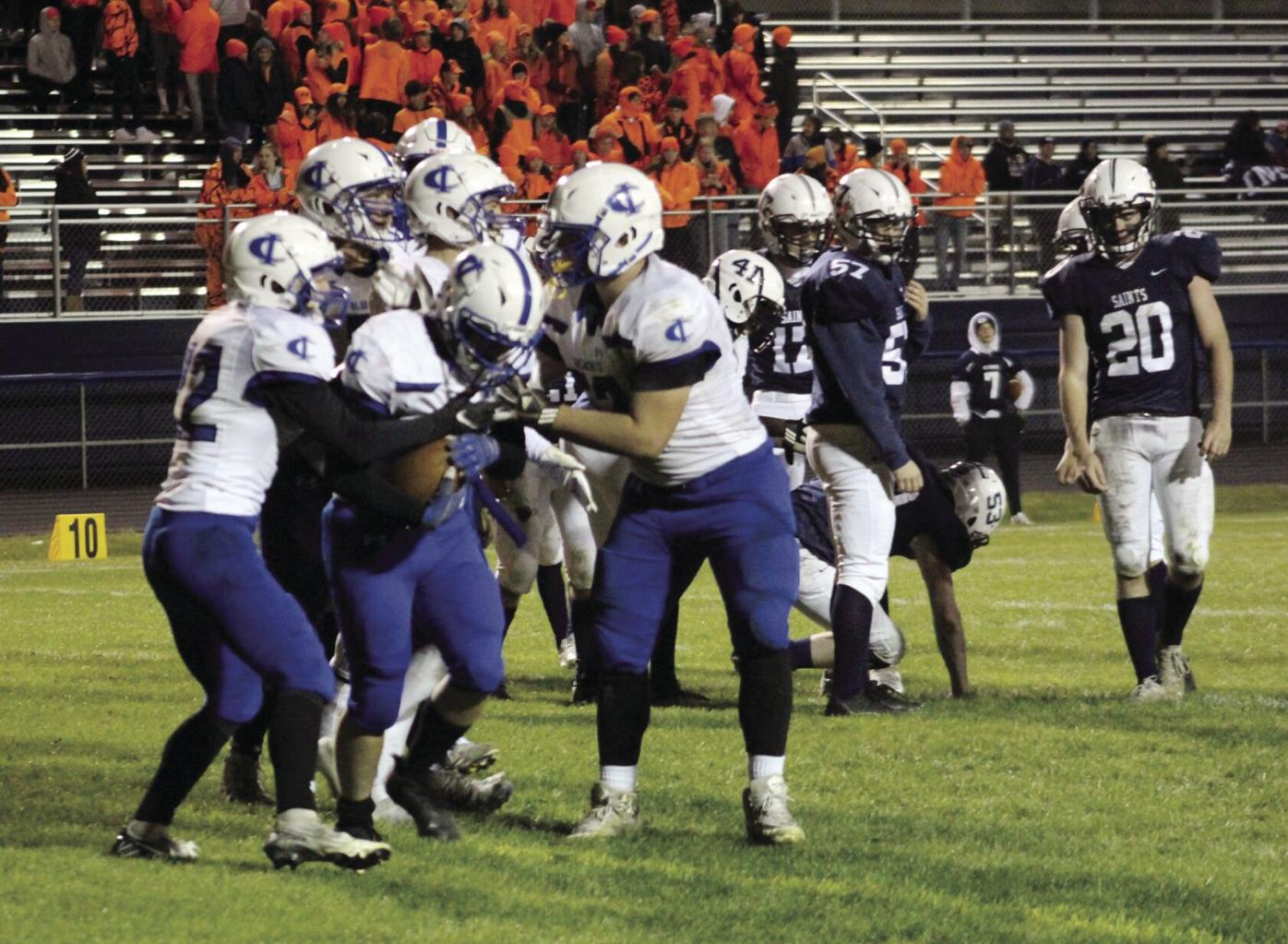 The Bluejacket defense celebrates one of the interceptions in made in the win at St. Francis. 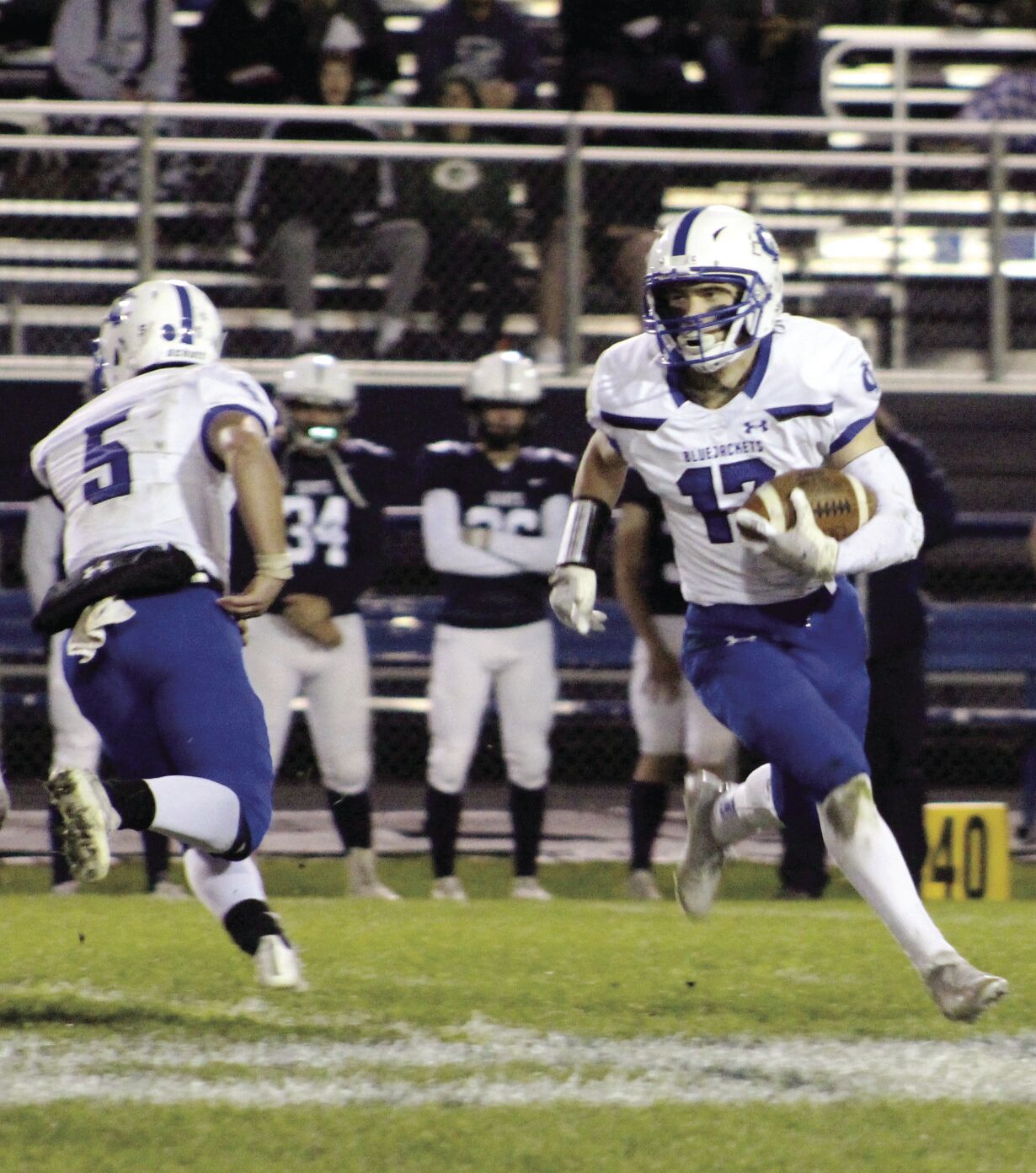 Senior Brandon Larson sweeps to the left on the way to a touchdown on the first play of the second half at St. Francis. Cambridge-Isanti got two TDs from Larson in its 35-7 victory over the Knights on Tuesday, Oct. 26. 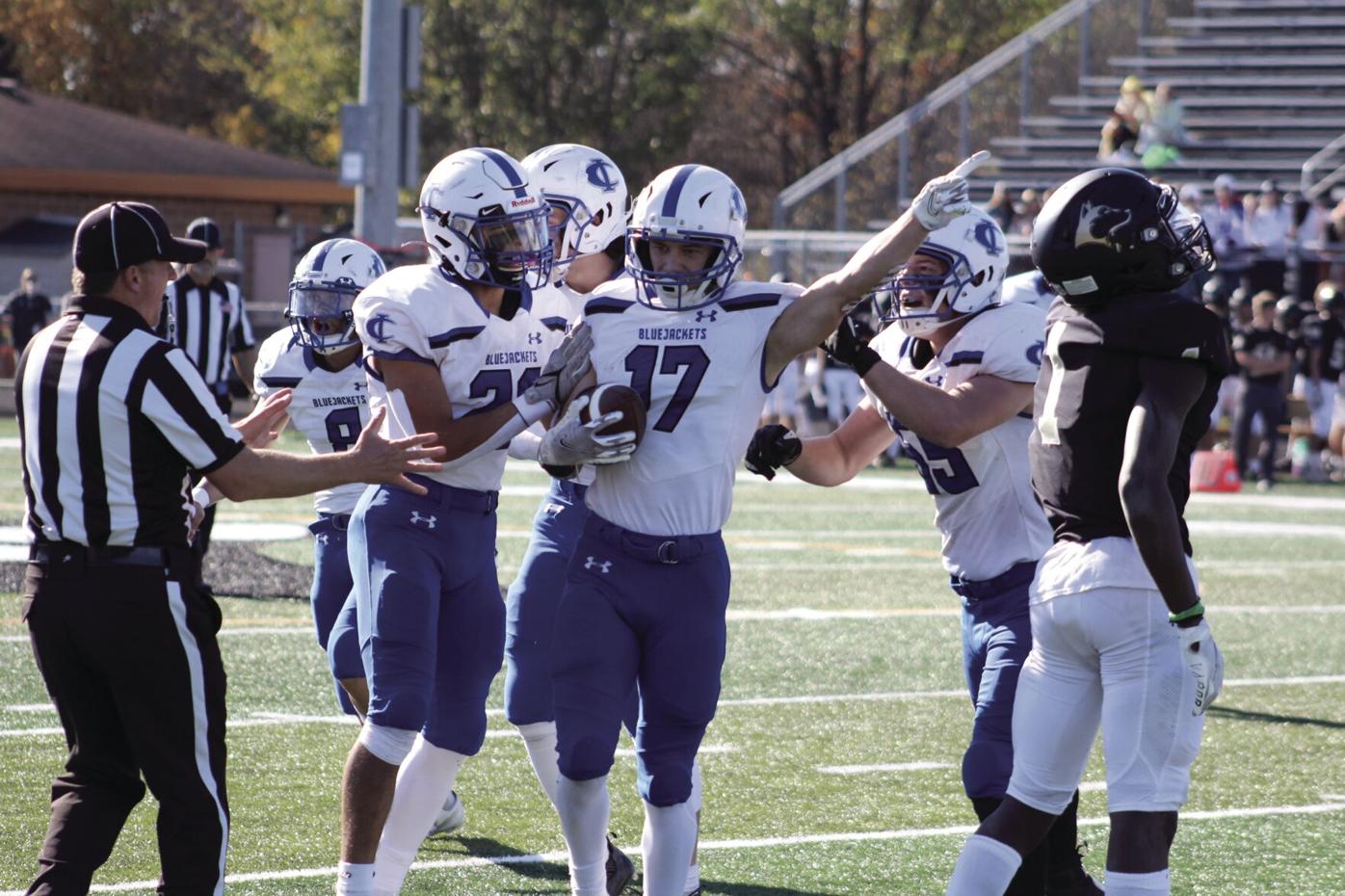 Senior Braden Jones celebrates after picking off an Andover pass in the contest played Saturday, Oct. 30. 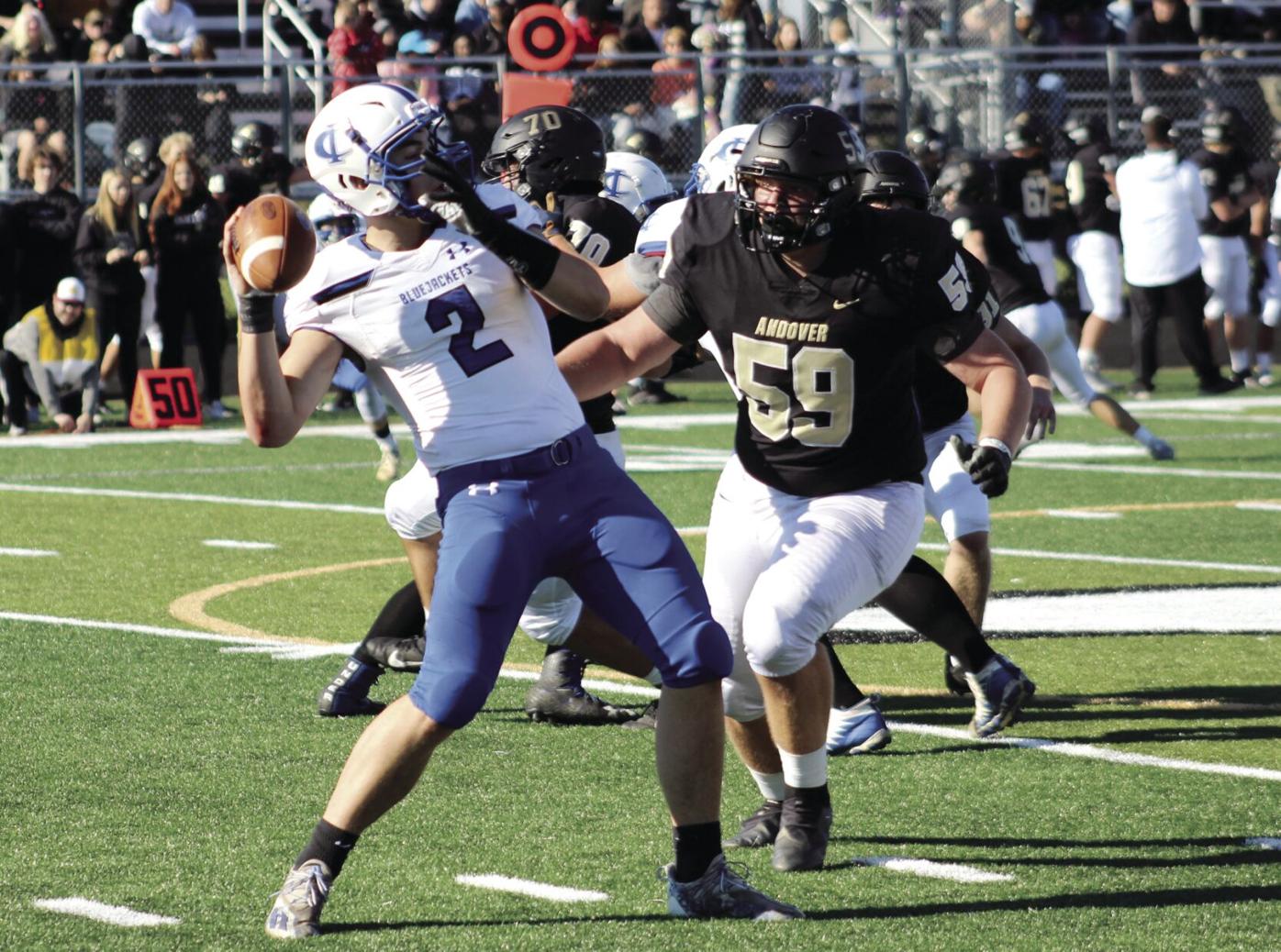 Senior Merle Mauer was pressed into quarterback duties when starter Ari Sullivan was unable to play against Andover on Saturday, Oct. 30. 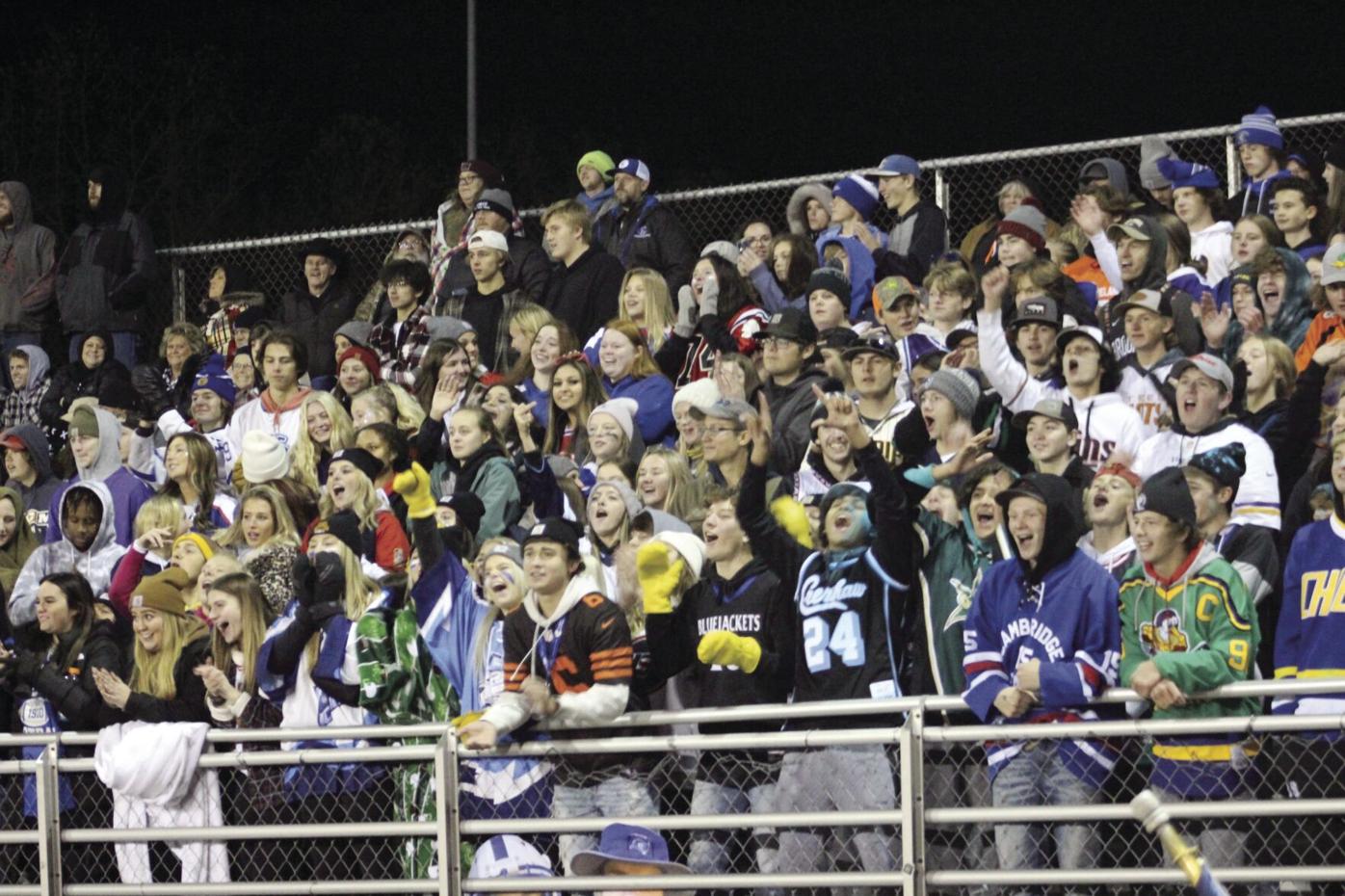 Cambridge-Isanti had a vocal and active student section in the victory at St. Francis on Tuesday, Oct. 26. 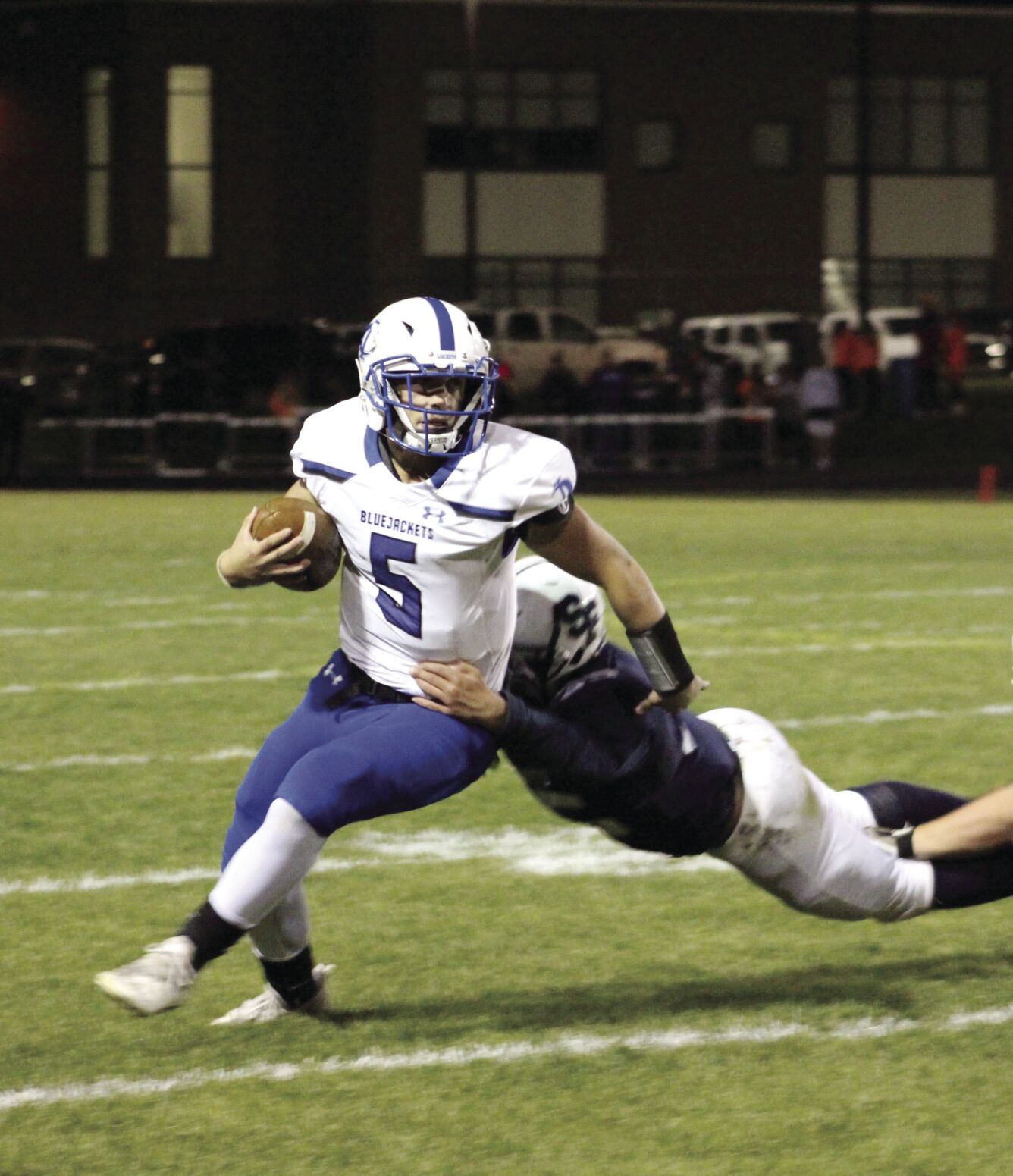 The Bluejacket defense celebrates one of the interceptions in made in the win at St. Francis.

Senior Brandon Larson sweeps to the left on the way to a touchdown on the first play of the second half at St. Francis. Cambridge-Isanti got two TDs from Larson in its 35-7 victory over the Knights on Tuesday, Oct. 26.

Senior Braden Jones celebrates after picking off an Andover pass in the contest played Saturday, Oct. 30.

Senior Merle Mauer was pressed into quarterback duties when starter Ari Sullivan was unable to play against Andover on Saturday, Oct. 30.

Cambridge-Isanti had a vocal and active student section in the victory at St. Francis on Tuesday, Oct. 26.

The Cambridge-Isanti football team experienced both the highs and the lows of playoff football – all in the span of five days.

The high came first, as the Bluejackets won their Class 5A Section 7 opener in convincing fashion, crushing St. Francis 35-7 on the Knights’ home field on Tuesday, Oct. 26.

Soon after the contest ended, the celebration began as a large swarm of Bluejacket fans buzzed onto the field to celebrate with the team. And that celebration was a long time in coming after C-I posted a 1-7 record during the regular season.

“[This win] meant that 1-7 means nothing,” senior Braden Jones said.

It also avenged a 7-0 loss to the Knights during the regular season, and this win was as convincing as the final score would indicate. After stopping the opening drive by St. Francis at midfield, the Bluejackets got a touchdown when senior quarterback Ari Sullivan competed a 5-yard TD toss to senior Merle Mauer with just 1:19 left in the opening quarter.

The two teams played evenly through most of the second period until back-to-back plays swung momentum in favor of the Bluejackets.

Jones made both plays, with the first coming when he intercepted a St. Francis pass and ran it back 60 yards for a touchdown with just 28 seconds on the clock before halftime.

“I saw the play develop, and when I caught it in stride I just wanted to take it to the crib,” Jones said of the interception. “I was greedy, so I wanted the score.”

Instead of leading just 7-0 at halftime, C-I took a 15-0 advantage into the break.

“It was a huge momentum swing,” coach Shane Weibel said. “And then we got the ball to start the second half. We felt we could relax and play football. Then on the first play of the second half we caught them in a blitz with a buck sweep, which has been around since 1910. And it still works. It was fun to see that play work.”

Jones took the ball 50 yards into the end zone on that sweep, and the Bluejackets led 22-0.

“That touchdown was a result of great blocking by the offensive line,” Jones said.

The only hiccup for Cambridge-Isanti came when St. Francis blocked a punt and returned it for a touchdown early in the fourth quarter. But the Bluejacket offense responded with a drive that was culminated by a 22-yard scoring run by senior Devin Larson with 8:41 to play.

C-I added some insurance on a 1-yard TD plunge by sophomore Levi Maurer with just 2:36 on the clock.

“Everything we’ve been building towards came together,” Weibel said. “We looked like the team we thought we could be.”

The Cambridge-Isanti offense finished with 301 yards, including 259 on the ground. Larson led the way with 103 yards on 20 carries, while Jones had 61 yards on eight attempts. Sullivan completed 4-of-8 passes for 42 yards, with Mauer catching three of those passes for 37 yards.

“I thought we were physically better this time around on offense,” Weibel said. “And we took 4 yards when that was what we could get. We talk about ‘running into cloudy,’ where the hole may not be completely clear. But we popped through out of cloudy a few times.

“I thought this was the offensive line’s best game this season.”

Meanwhile the defense limited St. Francis to 240 yards of total offense, including just 52 rushing yards, and had three interceptions – one apiece for Jones and fellow seniors Andre Hall and Brayden Johnson, who finished with a team-high seven tackles. Senior Adam Hamed and junior Lance Larson each had five tackles, while senior Colton Skoglund added 4.5 stops. Junior Lucas Daigle had two tackles for loss among his four total tackles.

“I don’t think they could match us athletically, especially in the defensive backfield,” Weibel said. “In the first game, that lone touchdown came on a halfback pass. This time we put them in a lot of third-and-long a lot because we were able to keep them from running very effectively.

“I thought we put everything together.”

But the low came just four days later when the Bluejackets suffered a 56-21 loss at Andover. In that contest the Huskies, the top seed in the tournament and the No. 3-ranked team in the state in Class 5A, scored 28 points in the opening quarter as C-I struggled to overcome turnovers and mistakes.

“We had five turnovers in the first half, and it’s hard to beat anybody doing that, much less a good team like Andover,” Weibel said.

The Bluejackets, playing without Sullivan at QB, got on the board at 10:29 of the second quarter when Mauer completed a 24-yard touchdown pass to Skoglund. But Andover scored twice before halftime and led 42-7 at the break.

“Sullivan was sick – not COVID, though,” Weibel said. “He tried to go, but he hadn’t been in school all week because he was sick, and there’s not much you can do about that. Quarterback is the most important position in this sport, and when you have to change on the fly, that’s tough.”

The Huskies scored the only points in the third quarter, then added another TD before C-I scored twice in the final eight minutes. Mauer completed a 75-yard scoring strike to Jones, and Maurer ran 41 yards for a touchdown with 3:34 to play.

Cambridge-Isanti did finish with 341 yards of total offense, including 240 through the air as Mauer completed 12-of-20 passes, with Jones catching six of those passes for 182 yards. Maurer led the ground game with 53 yards on five carries.

Hamed led the defense with 7.5 tackles, including six solo stops, while Skoglund and Daigle each had 4.5 tackles.

After the contest, the Bluejacket fans and players shared tears and hugs that had nothing to do with the scoreboard.

“I can’t say enough about our seniors,” Weibel said. “It’s been four years of commitment in the weight room, volunteering to help with the little kids, raising funds. To have a year where we had so many close losses, and they kept coming back and trying to get better, and never questioned or pushed back.

“We put it together against St. Francis, and that was fun. It’s a body of work, not just one day, that defines a season. We got to grind together with our buddies, and we got to play.”