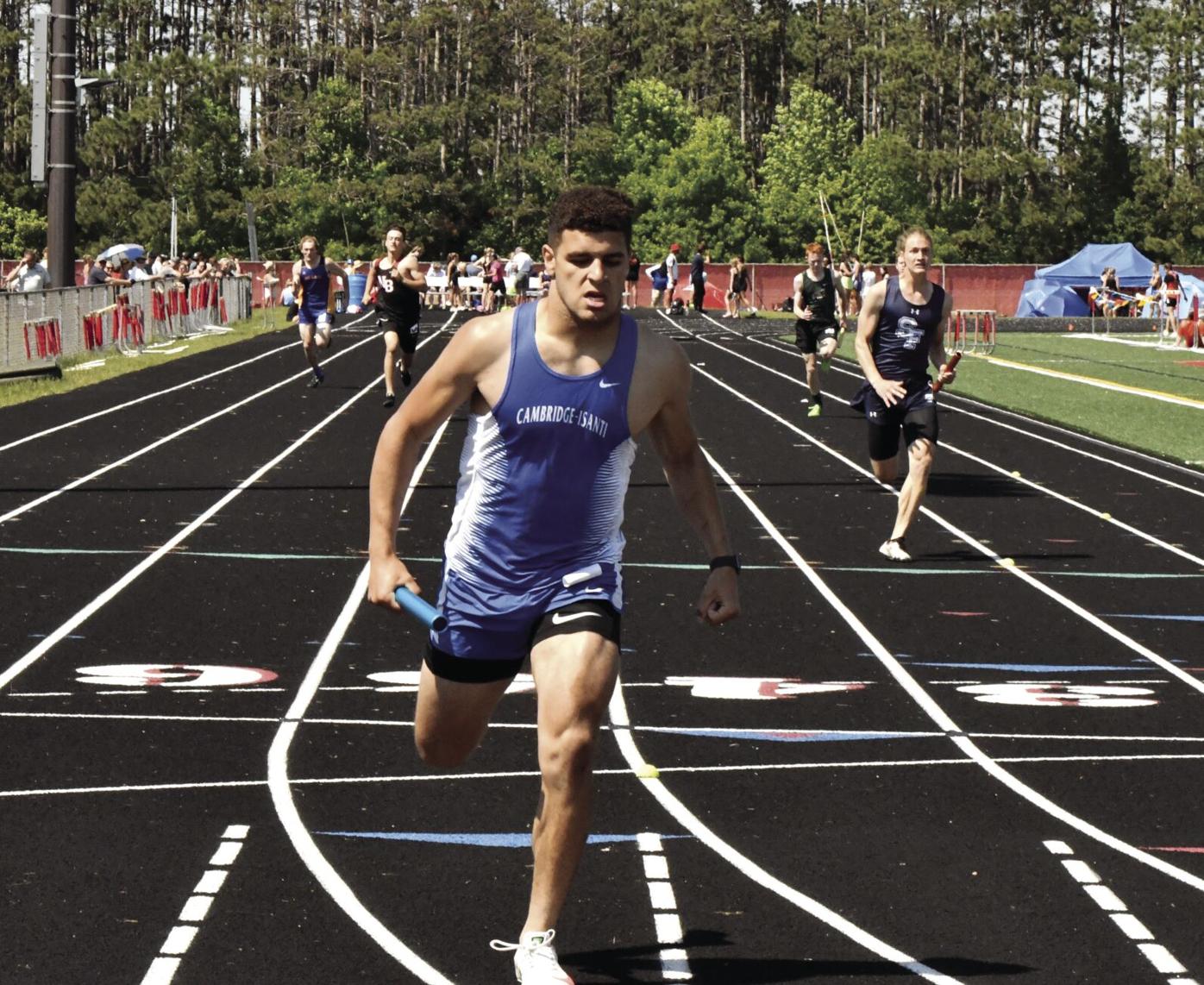 Cambridge-Isanti junior Adam Hamed crosses the finish line at the end of the 4x200 relay. Hamed and the Bluejackets finished second in that event with a time of 1:34.27. Photos by Jorge Perales 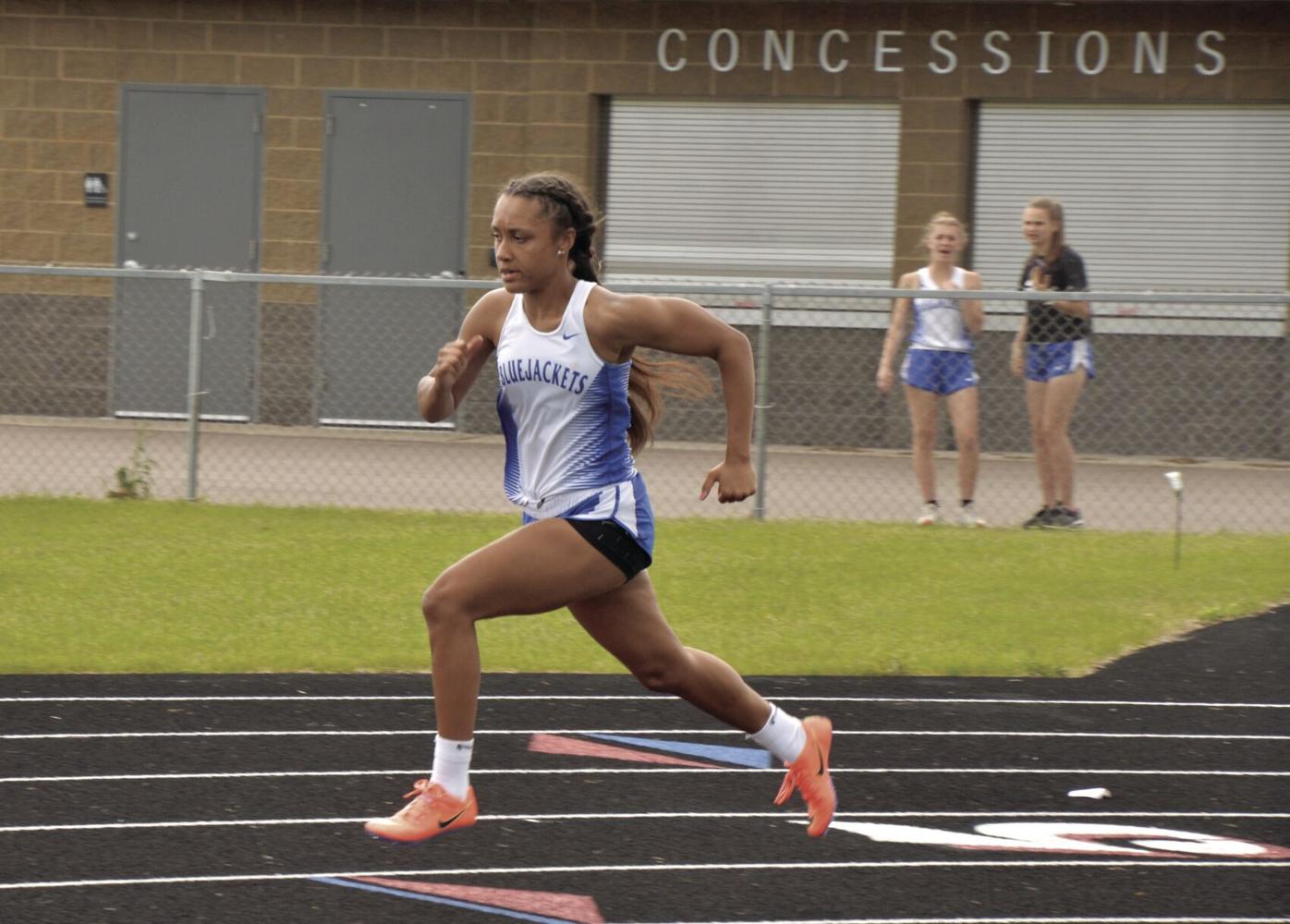 Cambridge-Isanti junior Aiyana Knight takes a long stride as part of her 400 run. Knight won that event with a time of 1:00.01.

North Branch senior Henry Toussant clears a hurdle at the Mississippi 8 Track Championship hosted by the Vikings on Wednesday, June 2. Toussaint won both hurdle events, including the 300 hurdles with a time of 41.73.

Cambridge-Isanti junior Adam Hamed crosses the finish line at the end of the 4x200 relay. Hamed and the Bluejackets finished second in that event with a time of 1:34.27. Photos by Jorge Perales

Cambridge-Isanti junior Aiyana Knight takes a long stride as part of her 400 run. Knight won that event with a time of 1:00.01.

North Branch senior Henry Toussant clears a hurdle at the Mississippi 8 Track Championship hosted by the Vikings on Wednesday, June 2. Toussaint won both hurdle events, including the 300 hurdles with a time of 41.73.

Cambridge-Isanti boys track coach Kent Viesselman was ready to celebrate after his team won the Mississippi 8 Championship at North Branch on Wednesday, June 2.

“But our kids were quiet – even though we had just won the conference,” Viesselman explained. “One of the boys said to me, ‘We wanted to do our best. We expected to win the conference.’ I don’t think that’s being cocky – they were just very confident.

“I thought that this was our best overall team performance. We placed in every event, and that was a big deal. And in many events we placed two or three kids. I told them, ‘It’s OK to celebrate winning a conference title.’ And they did.”

The Bluejackets finished with 187.5 points, outpacing second-place Monticello by more than 34 points. But C-I won only three field events on the way to the title, which is a testament to the team’s depth.

“We coach every kid, so that gives us depth,” Viesselman said. “And it also means we’re less likely to have a bad performance, because even if one kid does not do well, we will absorb that result and keep scoring points.”

Senior Jacob Ziebarth cleared 6-4 to win the high jump, while senior Ethan Hintermeister cleared 14-8 to lead a 1-2-3 finish in the pole vault along with freshmen Riley and Micah Wilson.

Another big effort for Cambridge-Isanti came in the discus, where seniors Trent Beseth and Luke Olson took the top two spots. Both landed big throws that exceeded their seed distances by a wide margin, with Beseth covering 140-10 and Olsen throwing the discus 138-4.

That depth was a C-I hallmark throughout the meet. For example, in the 800 junior Zander Gallmeier was second (2:06.42), while senior Austin Otier was fourth (2:09.26) and junior Joshua Provost was eighth (2:11.64). The 14 points that trio provided was more than any other school mustered in that event.

“In the field events and the hurdles, we really had some outstanding results,” Kent Viesselman said. “Having your third person place means they performed well. It was such a great team effort.”

And Cambridge-Isanti’s depth also shined in the four relays, as the Bluejackets took second place in all four for 32 more points.

The Cambridge-Isanti girls track team trailed only Monticello in the Mississippi 8 championship, with the Magic posting 188.5 points while the Bluejackets had 164.

“It wasn’t like we were blown out – it was only 18 points,” interim coach Linda Droubie said. “Monticello is a very strong team, so our girls can be proud that they finished within 18 points of them.”

Cambridge-Isanti scored the bulk of its points in the sprints and the field events. Sophomore Anika Larson led a 1-2-5 finish for the Bluejackets in the 200, winning the event with a 26.84 clocking. Junior Aiyana Knight was close behind with a time of 27.00, while junior Lacy Leverty was fifth at 28.50.

Cambridge-Isanti also had an impressive showing in the field events, including a 1-2-5 finish in the high jump, with sophomore Ada Schlenker winning after clearing 5-0. Senior Emily Jones (4-10) was second and junior Ashley Ladd (4-8) was fifth.

Droubie said she hopes her team learned some lessons about competing in a top tier meet.

“We had some athletes who were younger, and they struggled a little bit,” she said. “They didn’t get a chance to compete last year, so this was probably their first big meet.

“In cross country we had a couple of runners who were disappointed in how they ran in the league meet, but they totally rebounded at sections. If you are going to have a ‘tough’ meet, would you prefer to have it at the conference meet or at sections? Clearly at conference.

“We’ll come back strong and learn from this.”

North Branch had a number of top performances at the Mississippi 8 Championship meet it hosted, and those strong efforts lifted the girls into third place with 89 points while the boys took sixth with 47.5 points.

On the girls side, senior Paige Bauer won the pole vault by clearing 11-6, placed second in the long jump with a best leap of 16-8.5, and took third in the high jump by clearing 4-10. A pair of seventh graders, Ella Dick and Brooke Giese, finished second and fourth for the Vikings in the pole vault.

Senior Abby Schulte placed second in the shot put with a best throw of 33-0, while senior Alexis Torres took fifth in the discus with a toss of 99-8. Eighth grader Ella Kuhlman took third in the 300 hurdles (50.11), while fellow eighth grader Sophia Benedict placed fourth in the 400 (1:06.51).

On the boys side, senior Harrison Toussaint was the top performer for the Vikings. He won the 110 hurdles with a time of 16.11, and his 41.73 clocking of the 300 hurdles earned him the top spot in that race as well.

The Cambridge-Isanti girls finished 11 of 12 teams in the Class 3A State True Team meet, which was held virtually by teams using results from a previous meet. The Bluejackets used results from a meet at Big Lake from two weeks ago.

The virtual nature of the event did not take into account discrepancies in weather, meanwhile the Bluejackets ran on a windy day in Big Lake while other teams did not face the exact same condition. Also, star sprinter Aiyana Knight did not run at Big Lake because of injury.

“It was a tremendous accomplishment for the girls to make it to True Team State,” Droubie said. “Unfortunately we didn’t have the opportunity to have an ‘in-person’ meet, and I think the results would have been difference had there been an in-person meet.”