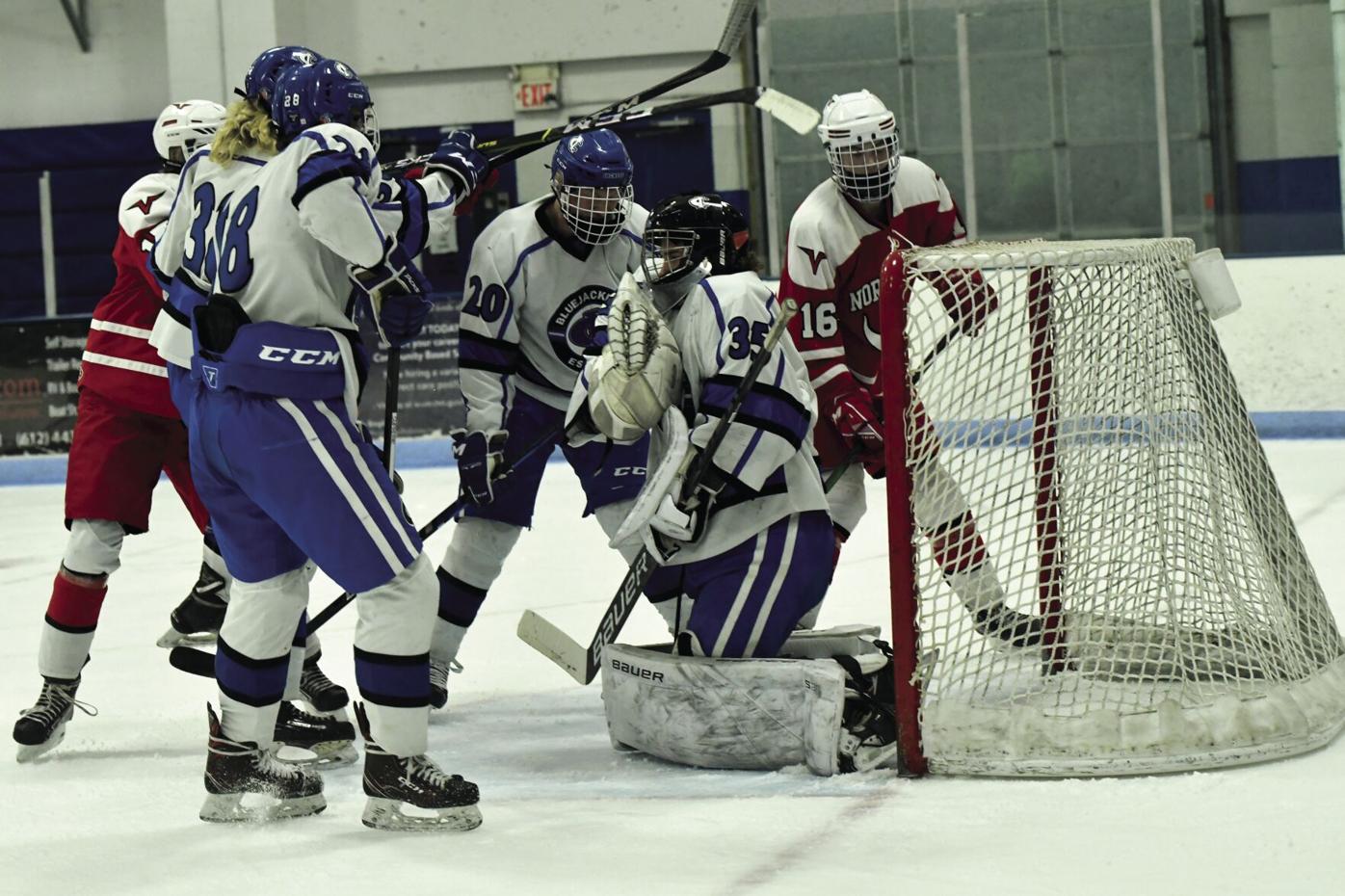 Cambridge-Isanti senior Bobby Humphrey makes a save in the Bluejackets’ win over North Branch on Monday, March 8. C-I is the No. 3 seed in the Class A Section 5 tournament, while North Branch is seeded fifth and on the other side of the bracket. Photos by Jorge Perales 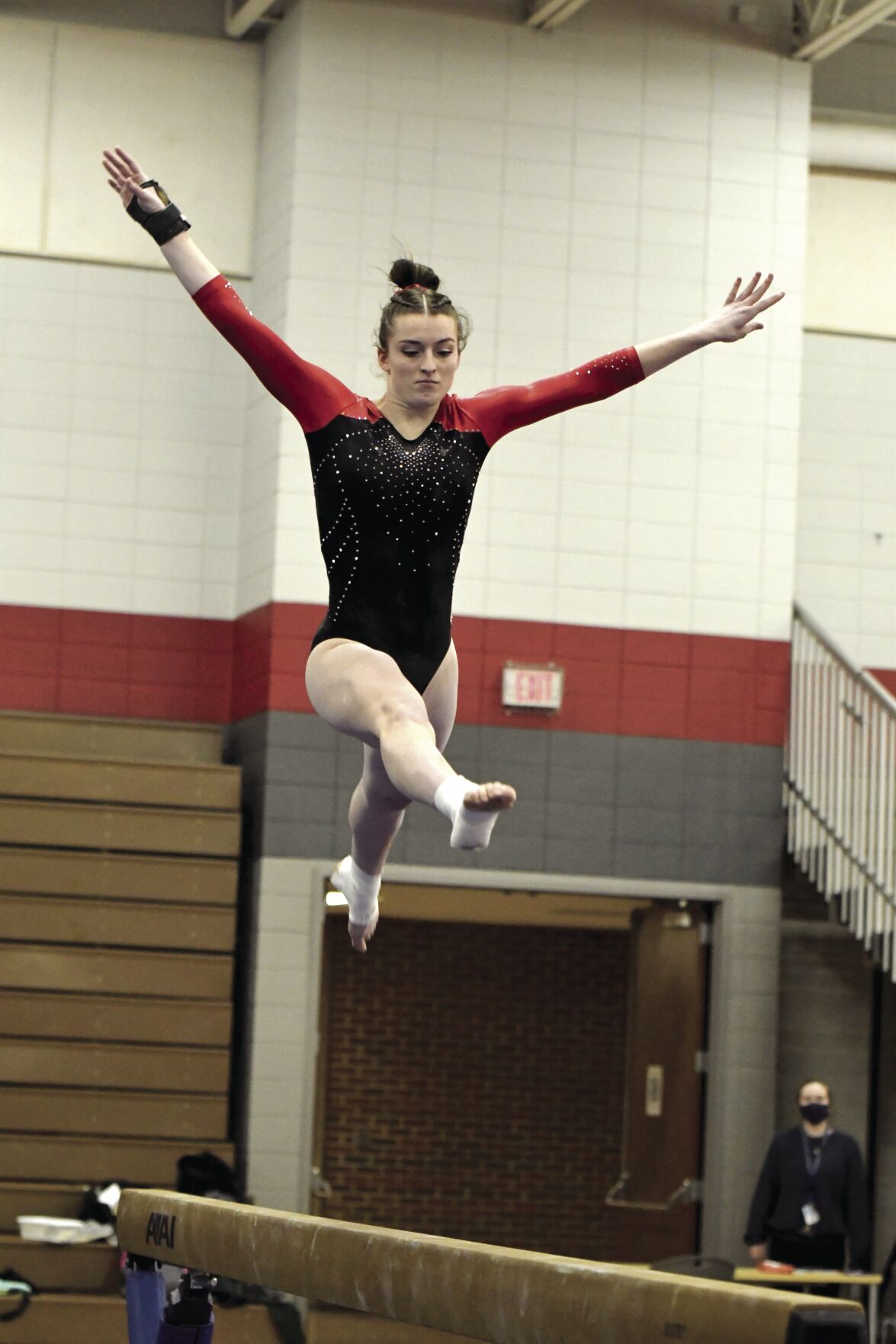 North Branch senior Paige Bauer competes on the balance beam in the Vikings’ win over Maple Lake on Thursday, March 11.

Cambridge-Isanti senior Bobby Humphrey makes a save in the Bluejackets’ win over North Branch on Monday, March 8. C-I is the No. 3 seed in the Class A Section 5 tournament, while North Branch is seeded fifth and on the other side of the bracket. Photos by Jorge Perales

North Branch senior Paige Bauer competes on the balance beam in the Vikings’ win over Maple Lake on Thursday, March 11.

The Cambridge-Isanti boys swim team posted a solid performance at the Class 2A Section 7 meet hosted by Coon Rapids on Saturday, March 13.

While the Bluejackets may have finished last in the eight-team field with 114 points, they were buoyed by several strong individual and relay performances. The best efforts were posted by the program’s two seniors, Mitchell Patrick and Eli Bingham.

Cambridge-Isanti also had two relays score points by finishing seventh at the meet. The 200 medley relay team of Patrick, Bingham, sophomore John Humphrey and freshman Christopher Williams placed seventh with a time of 1:48.78, while the 400 free relay of Humphrey, sophomore Michael Sauze, Williams and Patrick was seventh with a 3:42.77 clocking.

The 200 free relay of Bingham, freshmen Nathaniel Engelking and Joseph Larkin, and Sauze took eighth with a 1:43.65 clocking.

Eighth grader Dakota Esget led the way, winning the all-around with a season-high score of 36.825 that included firsts on the uneven parallel bars (9.075) and floor exercise (9.425).

“Dakota and Paige have been working on some new skills in practice, and that work sure paid off,” coach Mikayla Johnson said. “Dakota had a solid score on beam, and Paige had a good score on uneven bars. And Bekah had a solid meet as well, with a strong 35.000 all-around.”

North Branch and Rush City both will compete in the Class A Section 7 meet at Big Lake on Saturday, March 20. The Flamingos will perform in the first session starting at 3 p.m., and the Vikings will swing into action in the second session beginning at 6:30 p.m.

Cambridge-Isanti will return to action for the Class 2A Section 7 tournament hosted by Forest Lake on Friday, March 19, starting at 5 p.m.

Cambridge-Isanti will enter section tournament play on a bit of a downer after having lost twice last week.

The Bluejackets began the week with a 4-2 loss at St. Francis on Thursday, March 11. Junior Jaxon Jones scored in the first period for C-I, and senior Nathaniel Bauer’s power-play goal in the second tied things up. But the Knights scored twice in the final period to claim the victory.

Senior Bobby Hendricks stopped 27 shots in that contest for the Bluejackets.

Two nights later, Cambridge-Isanti dropped a 4-1 decision at Princeton. Junior Treyten Green’s goal midway through the third period allowed the Bluejackets to avoid the shutout, and Hendricks finished with 31 saves in the loss.

Cambridge-Isanti will enter tournament play as the No. 3 seed in Class A Section 5 and will receive a first-round bye for its efforts. The Bluejackets will host either Becker-Big Lake or Pine City in the quarterfinals on Thursday, March 18, starting at 7:30 p.m. at the Isanti Ice Arena, with the winner of that contest advancing to a semifinal game two days later.

North Branch is the No. 8 seed in the Class A Section 5 tournament and opened with a contest against Mora on Tuesday, March 16, that was not completed at press time. If the Vikings won, they will face top-seeded Monticello on the road on Thursday, March 18, starting at 7 p.m., with the winner of that game advancing to the semifinals Saturday night.

The Northern Tier Stars will enter section tournament play on a strong note after winning two of their three games last week.

The Stars began the week by crushing Prairie Centre, scoring three goals in the first and third periods of a 7-0 victory on Monday, March 8. Senior Jasmyn Sibell led the offense with two goals and an assist, while fellow senior Ashton Parnell had a goal and two assists.

The Stars then lost to Chisago Lakes 5-2 on Thursday, March 11. Senior Jenna Kurkowski scored both goals in the game for the Stars, while Gibb stopped a whopping 55 shots to keep her team in the contest.

The Stars then closed the regular season with a 2-1 home win over Sartell/Sauk Rapids on Saturday, March 13. Trailing 1-0 entering the third period, Parnell and Rudnick both notched power-play goals less than two minutes apart to power the comeback victory.

Gibb kicked aside all but one of the 29 shots she faced to claim that win.

The Northern Tier Stars are the No. 7 seed in the Class 2A Section 7 tournament and played their first-round game at Forest Lake on Tuesday, March 16, in a contest that was not completed at press time.

With a victory, the Stars would advance to the second round to face either Grand Rapids or the Duluth North Stars on Thursday, March 18, starting at 7 p.m.

Cambridge-Isanti was expected to compete in the Class 3A Section 7 team tournament starting Wednesday, March 10. But the Bluejackets found out that one of their opponents the previous weekend was dealing with skin issues that would sideline that team immediately.

That is when Cambridge-Isanti, which was seeded fourth in the section team tournament, made the noble decision to withdraw from that portion of the tournament instead of facing top-seeded Anoka. That would ensure that the Tornadoes, one of the top-ranked teams in the state in the tournament, would not be sidelined from future competition because of contact with a C-I wrestler.

Anoka defeated Forest Lake in the Section 7 championship match, then beat Section 8 champ Willmar to reach the semifinals of the Class 3A team tourney.

The Bluejackets competed individually in the Class 3A Section 7 individual tournament at Forest Lake on Wednesday, March 17, but that event was not competed by press time.

Rush City-Braham dropped a 55-12 decision to Holdingford in the opening round of the Class A Section 7 team tournament on Thursday, March 11. Jesse Eklund needed just 32 seconds to record a pin at 160 pounds for the Tigers, whose other winners were Landon Umbreit at 126 and Kaden Gorman at 152.

Rush City competed in the Class A Section 7 individual tournament at Cass Lake-Bena on Tuesday, March 16, but the results were not available at press time.

And North Branch will compete individually in the Class 2A Section 4 individual tournament hosted by Chisago Lakes on Thursday, March 18, starting at 4:30 p.m.