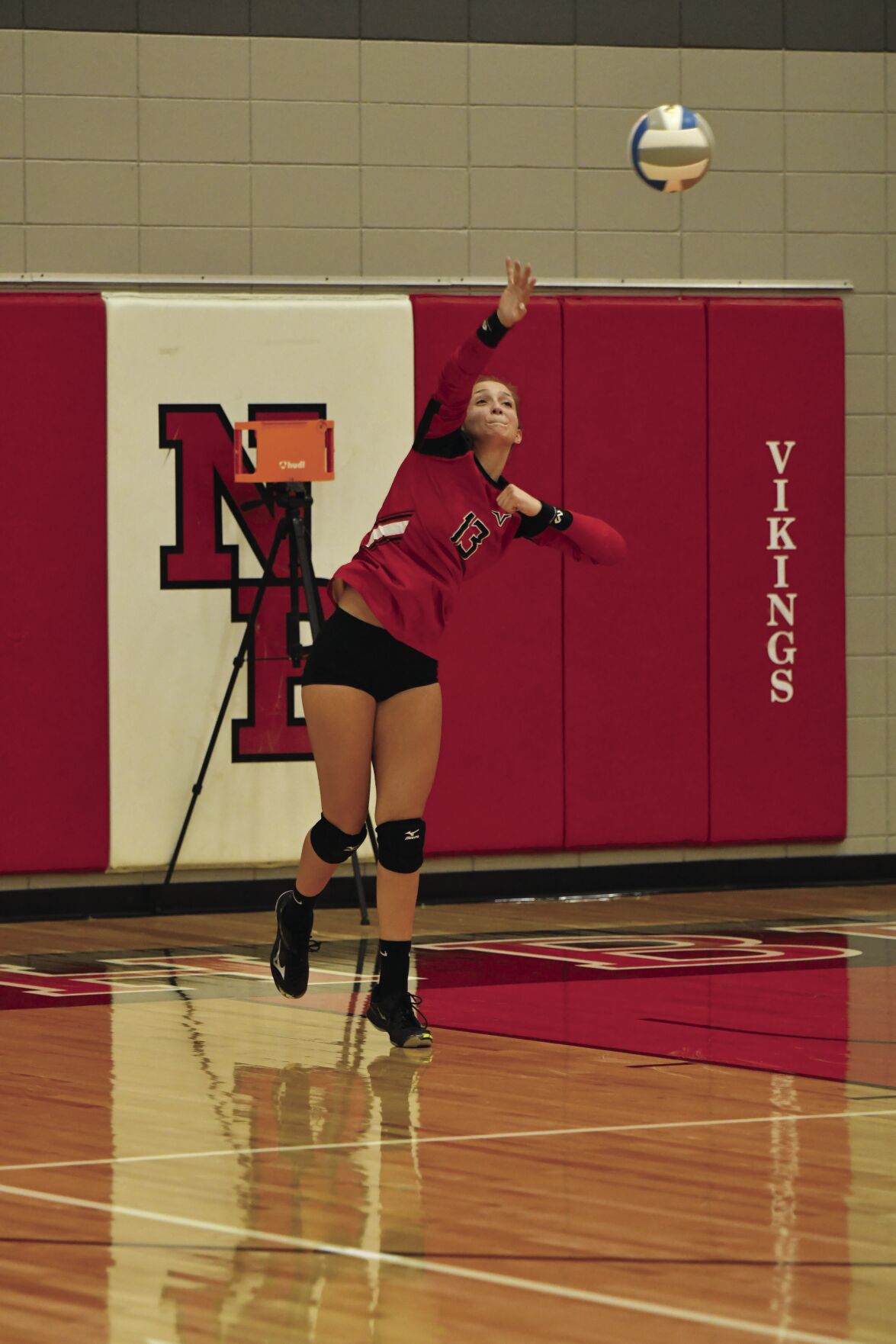 North Branch’s Lindsey Bunes prepares to serve against Princeton on Tuesday, Nov. 10. Bunes had 11 kills and 11 digs in the Vikings’ 3-set victory. Photos by Jorge Perales 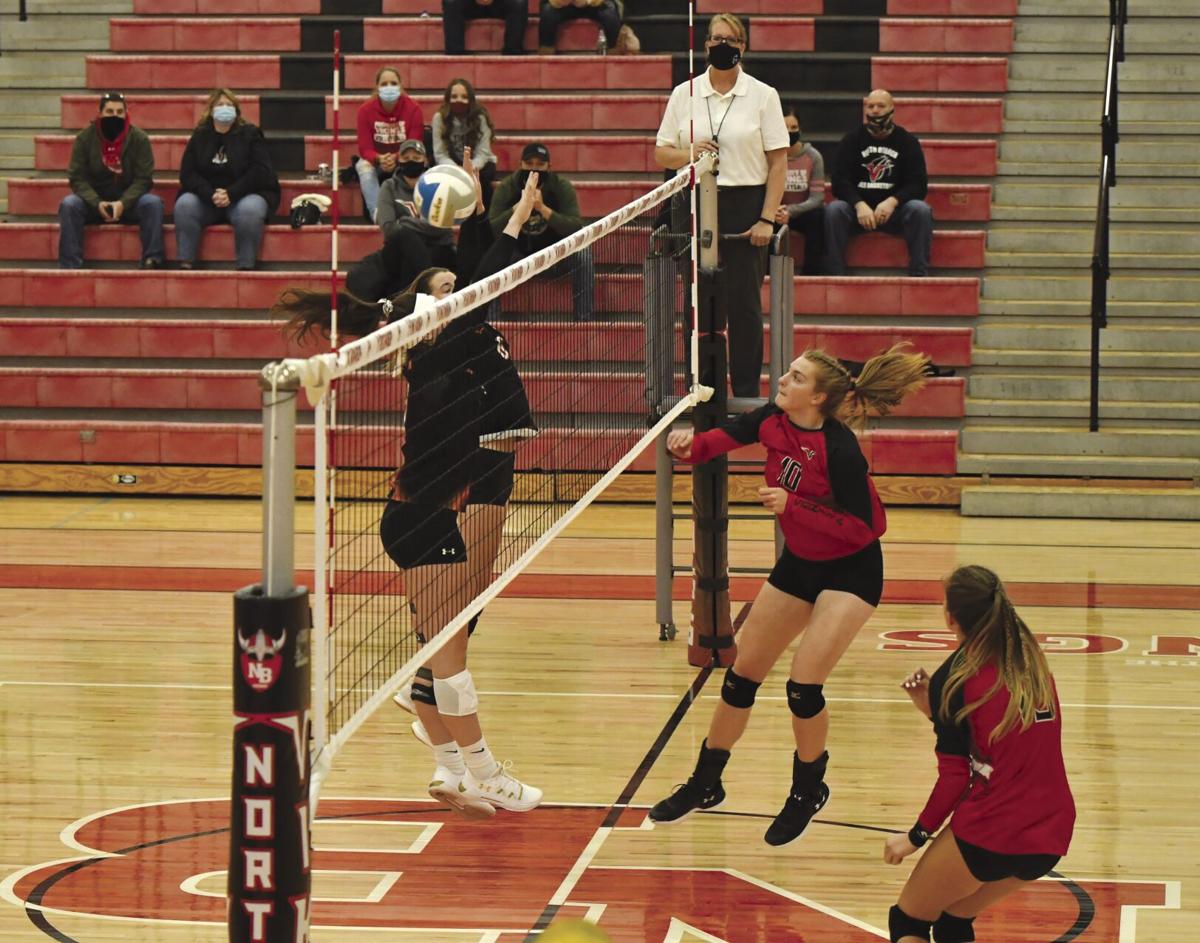 North Branch’s Paige Peaslee pounds one of nine kills against Princeton on Tuesday, Nov. 10. Peaslee also had three blocks in that win.

North Branch’s Lindsey Bunes prepares to serve against Princeton on Tuesday, Nov. 10. Bunes had 11 kills and 11 digs in the Vikings’ 3-set victory. Photos by Jorge Perales

North Branch’s Paige Peaslee pounds one of nine kills against Princeton on Tuesday, Nov. 10. Peaslee also had three blocks in that win.

Cambridge-Isanti volleyball coach Colin Dickey could only laugh when he looked at his team’s remaining schedule.

After fighting through a number of early season postponements and cancellations, the Bluejackets will finish with five games in eight days starting Tuesday, Nov. 17.

“I did say we were tired of all the practicing,” Dickey said.

Actually, the busy stretch for C-I began last week when the team played three games in two days – including a doubleheader against Princeton on Monday, Nov. 9. The Bluejackets lost the first match 3-1, then rebounded to beat the Tigers 3-1.

“We started off slowly in our first match against Princeton, but we grew stronger as the evening went on,” Dickey said. “And we carried that into our match on Tuesday against Big Lake.”

In the first match against Princeton, Makenzie Coplan led the way with 13 kills, while Ada Schlenker had 12 and Allyson Treichel added eight. Abbie Higley led the defense with 13 digs, while Schlenker added 12.

In the second match against Princeton, Coplan and Schlenker again led the offense with 11 kills apiece while Treichel had eight and Steph Gagne added seven. Higley again was a demon on defense, finishing with 17 digs, while Coplan added nine.

While Cambridge-Isanti swept all three games against Big Lake the next evening, it was a tight match in which the Bluejackets won by scores of 26-24, 25-20 and 26-24.

“We needed to make additional lineup changes when we found out Abbie Higley would not be available for our Big Lake match,” Coach Dickey said. “Ellie Kuznia slid into the libero position seamlessly, and Cierra Johnshoy played outstanding in the vacant defensive specialist spot.”

Kuznia finished with 20 digs, while Johnshoy had 14 and Brooklyn Dickey added nine to go with her 24 assists. Schlenker posted nine kills, while Coplan added seven.

This week began with a match on Tuesday, Nov. 17, at Monticello that was not completed at press time. C-I wraps up this busy stretch by playing at Becker on Thursday, Nov. 19, then at St. Cloud Cathedral two days later before home matches against St. Francis and North Branch on Monday and Tuesday, Nov. 23-24, close out the regular season.

The Vikings rolled to a 25-14, 25-17, 25-18 win over Princeton on Tuesday, Nov. 10. Lindsey Bunes contributed on both offense and defense, finishing with a team-leading 11 kills and 11 digs, while Paige Sheehan and Paige Peaslee contributed nine kills apiece.

Peaslee also had three blocks, while Sheehan added 28 assists as well as five digs, two service aces and a block.

North Branch then saw its win streak end with its 25-14, 26-24, 25-12 loss at Monticello two days later. The Magic improved to 8-0 in league play with the victory, while North Branch stands second at 8-2 with Cambridge-Isanti third at 6-3.

Peaslee and Reagan Irons led the Vikings with five kills apiece, while Sheehan had 14 assists. Sheehan also had seven digs, as did Chloe Fortuna.

While the Braham volleyball team lost a pair of matches to Onamia last week, the Bombers continue to play well despite battling injury issues as well as their opponents.

The Bombers lost in three straight sets at Onamia on Tuesday, Nov. 10, then dropped the rematch against the Panthers two days later.

“We came out of quarantine to travel directly to Onamia, and we could have really used a practice prior,” coach Tammi Johnson said. “Having to take more than a week off did not help our focus, and being down two players added to our struggles.

“We had a practice prior to Thursday’s match, and we were able to get back into the flow of things better, but we still struggled to stop Onamia’s tough hitters.”

Ashlynn Giffrow led the offense against the Panthers with seven and nine kills, respectively, in the two matches. Julia Kuhnke had a total of 11 kills in the two games, while Adelia Pierson finished with nine and Brinly Sundermeyer added eight.

Pierson had 12 digs on Tuesday, while Giffrow and Jenna Bostrom had 18 on Thursday while Pierson added 15.

Braham returns to action by traveling to Hinckley-Finlayson on Thursday, Nov. 19, before hoping to return home for a match against Rush City the following evening.

“The girls continue to work hard and do great things, so I hope we are able to finish the season,” Johnson said.