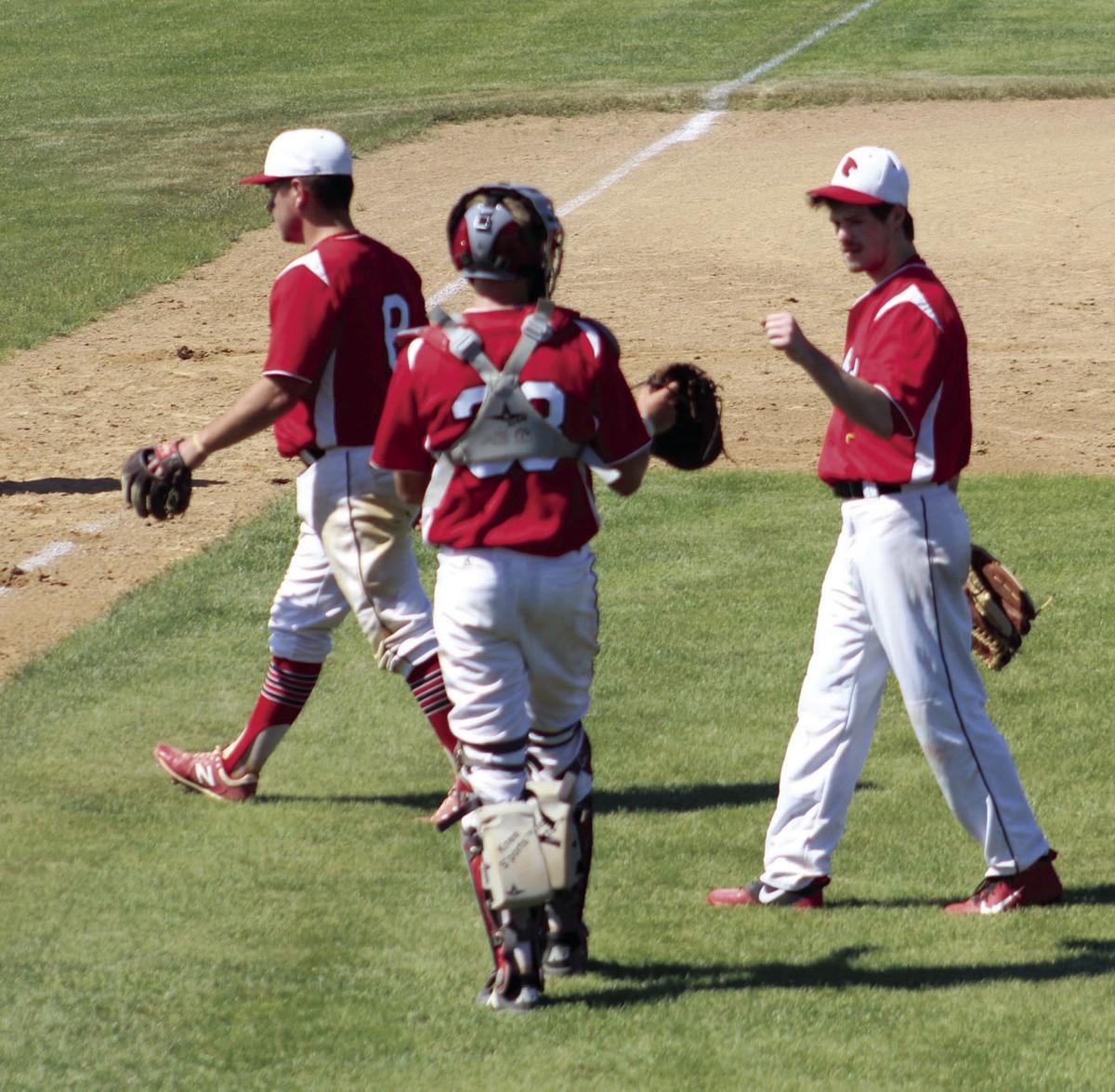 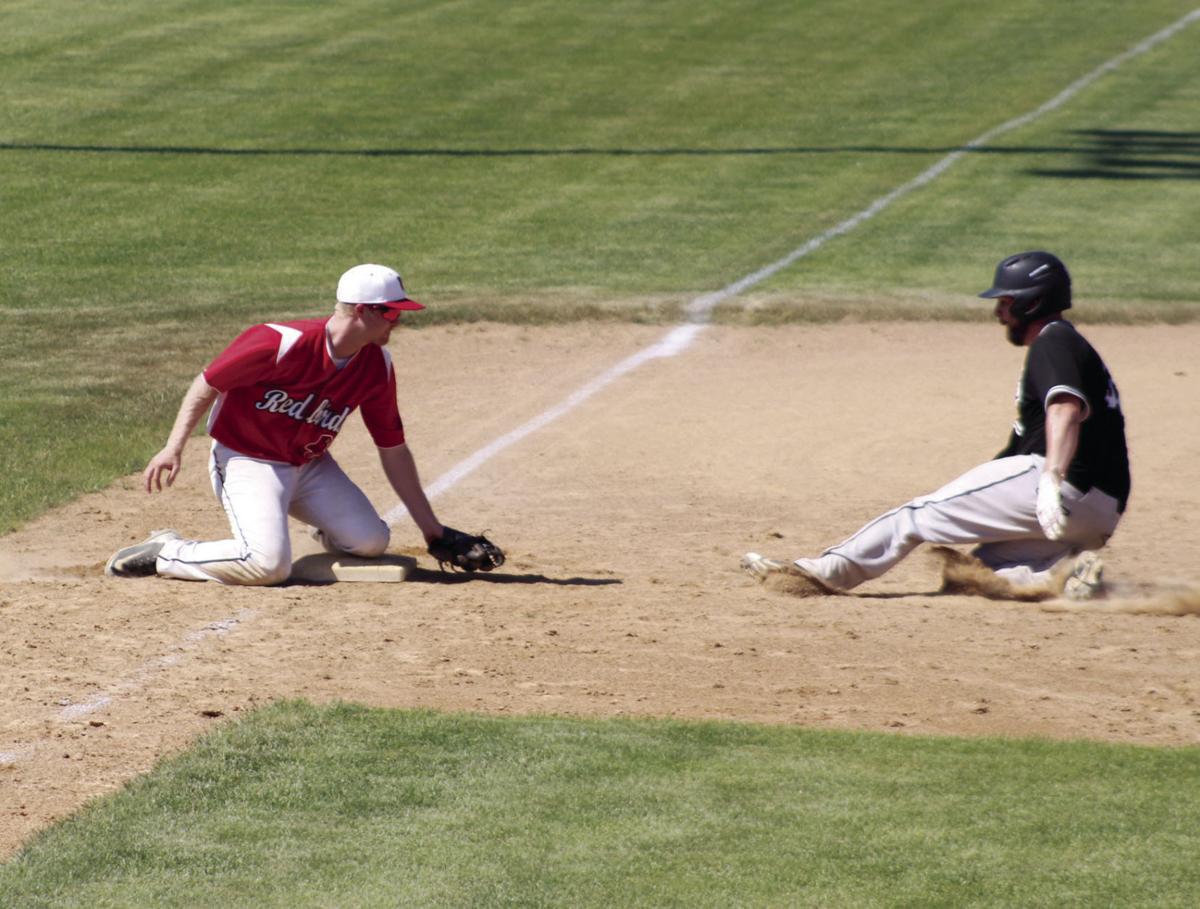 Isanti third baseman Zach Walz gets ready to tag a potential Forest Lake basestealer out at third after catching the throw from Redbirds catcher Mason Voshell.

Isanti third baseman Zach Walz gets ready to tag a potential Forest Lake basestealer out at third after catching the throw from Redbirds catcher Mason Voshell.

When Phil Bray read the text sent by Isanti Redbirds manager Steve Allen last weekend, he did a double take.

The Redbirds southpaw threw a nine-inning complete-game five-hitter to pitch his team to a 5-1 victory over Forest Lake at Redbirds Field on Saturday, June 27. And while Allen admits he was kidding, he also knew the crafty lefty was capable.

“He’s pretty durable, and he’s pretty savvy,” Allen said of Bray. “Phil threw four innings the last time he threw, and there was a game last season where he threw 160 pitches. We were a little short-handed, and he did a great job against a good hitting team.”

Bray gave up just three walks while fanning 12 Brewers in cruising to his first win of the season.

“They said I threw 133 [pitches],” Bray said, then smiled. “I felt good all game, so … [Catcher] Mason [Voshell] called a great game back there, so I just listened to him and hit my spots.”

“I played with one of their hitters on Mora’s team, so I knew a couple of them,” Bray said. “I tried to pitch around their third hitter, Mike Schultz, but someone in their dugout yelled, ‘Throw him something,’ so that was one conversation.

“Another guy swung at a knuckleball, and after that he yelled out, ‘Was that a knuckleball?’ That’s what amateur baseball is all about: We come out here and have fun.”

The Isanti offense gave the left-hander some cushion with single runs in the first and third before scoring three times in the fourth. Four Redbirds – Mitch Dunbar, Blaze Hogie, Wyatt Soderquist and Voshell – each had two hits, while Hogie collecting a pair of RBIs.

The previous evening the Redbirds struggled with another team nicknamed the Brewers, suffering a 4-3 home loss to Moorhead.

“We jumped out ahead 3-0 and James [Green] was cruising,” Allen said. “He basically was hurt by two bad pitches, one they hit for a home run and another that was a double off the wall. Boom-boom – four runs.”

Jeff Bowman, Nick Hoffman and Logan Kalis each had two hits for Isanti. Green finished with four strikeouts in five innings, while T.J. Wink surrendered just two hits and one walk while fanning five in four scoreless frames against the Brewers, who qualified for the Class B state tournament last season.

“Playing good teams like these – Moorhead, Coon Rapids, Forest Lake – are going to make us stronger in the end, win or lose,” Allen said.

The Redbirds were not the only local Town Ball team to play last weekend as Rum River and North Branch both got their seasons started.

Rum River opened with a 7-5 loss at Quamba on Saturday, June 27. The Bandits were hamstrung by five errors in the contest, which led to four unearned runs.

Mike Koplitz and Jesse Jacobson each had a double as part of Rum River’s eight-hit attack.

After opening their season against Rum River, the Snappers will take on Quamba on the road on Monday, July 6, starting at 7:30 p.m.

Meanwhile North Branch opened its season with a 10-4 victory over Quamba on Sunday, June 28. The Nighthawks were scheduled to play at Forest Lake on Tuesday, June 30, then will take a week off before playing three games in four days starting with a game at Isanti on Wednesday, July 8, starting at 7:30 p.m.