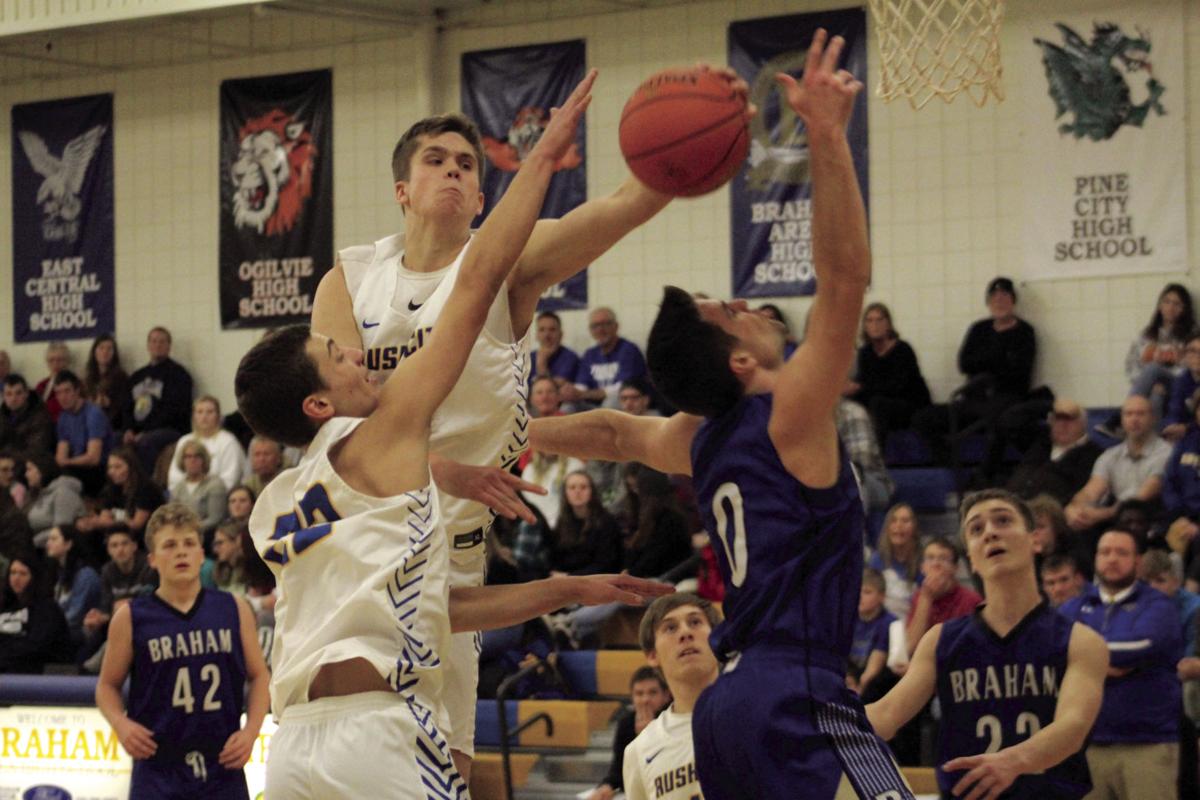 Rush City’s Brandon Gullerud blocks the layup attempt by Braham’s Luke Bendickson in the first half of the game between the two teams played Monday, Jan. 6 at Braham. 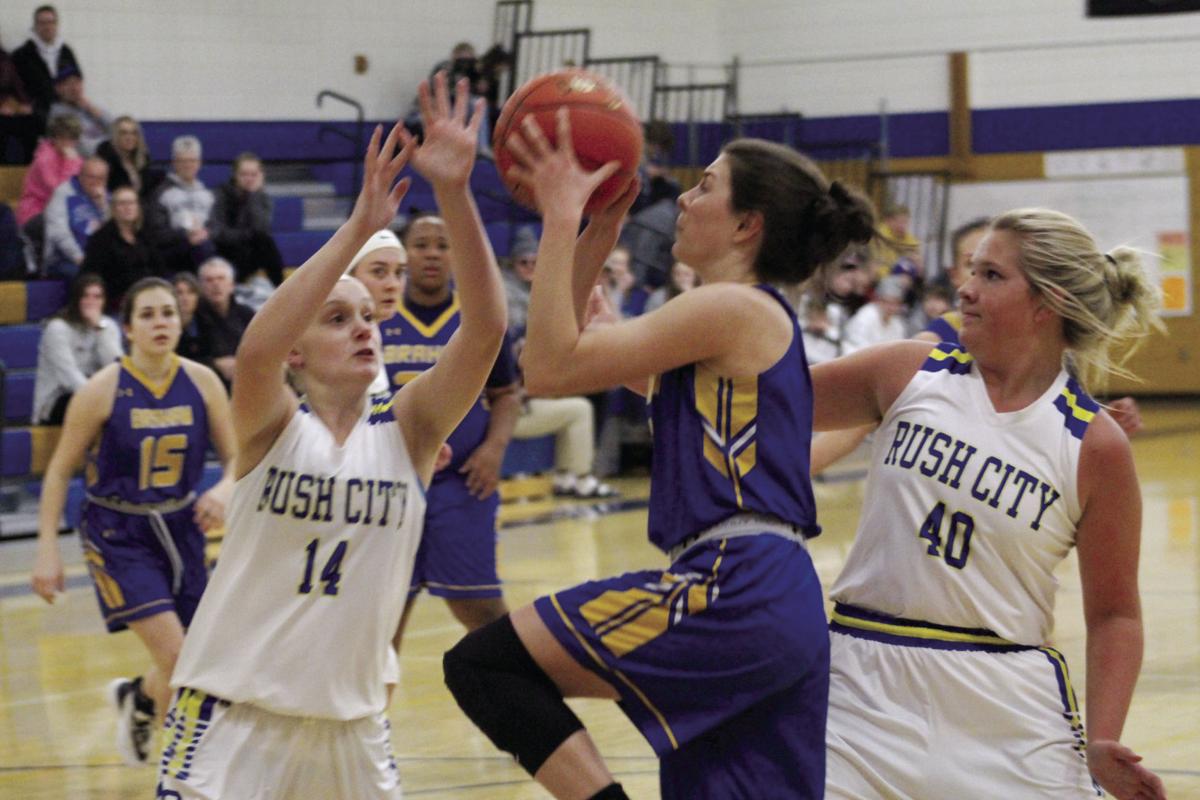 Braham junior guard Hannah Cornelius, in blue, drives to the basket while Rush City’s Selena Schmidt (No. 14) and Amelia Thompson (No. 40) attempt to block her way on Tuesday, Jan. 7.

Rush City’s Brandon Gullerud blocks the layup attempt by Braham’s Luke Bendickson in the first half of the game between the two teams played Monday, Jan. 6 at Braham.

Braham junior guard Hannah Cornelius, in blue, drives to the basket while Rush City’s Selena Schmidt (No. 14) and Amelia Thompson (No. 40) attempt to block her way on Tuesday, Jan. 7.

The good folks from Braham and Rush City fought another installment in their “Border War” last week.

On back-to-back nights, Tiger basketball fans drove across the Isanti-Chisago county line to watch their Tigers do battle with the Bombers, with the boys basketball teams clashing on Monday, Jan. 6, and the girls teams crossing sabers the following night.

Braham boys coach Jeff Eklund graduated from that school, and he knows how important the rivalry is – to both schools.

But it was more fun for Braham, as the Bomber boys won 53-49 on Monday, followed by a 51-34 victory by the Braham girls on Tuesday.

The boys game was tight throughout the first half, with Rush City taking a 25-23 halftime lead. But the Bombers used an early second-half run to take control and managed to hold off the Tigers.

“We said before the game, ‘Just hang in there,’” Eklund said. “Because of our situation, we were going to make some mistakes and Rush City was going to make some plays. But if we hung in until the end, we thought we would have a shot to win.

“And our kids believed that, and they played a hard, physical game.”

The “situation” Eklund alluded to was a combination of injuries and illness that led to a short bench for the Bombers.

“We’ve got a couple of kids on our JV who have been sick or injured, so some guys we would like to have play some varsity minutes are instead playing more on JV so we can be competitive,” he explained. “And Hayden Lee was diagnosed with mono, so Caleb Schustad is having to play more minutes, as are Connor Johnson and Jonah Johnson. And they did a great job.”

Zach Yerke led Braham with 26 points, many of them coming thanks to drives to the basket that led to either layups or free throws – or both – while teammate Kevin Laman added 12 points.

“All year we’ve challenged Zach to be aggressive, because that’s the role he’s in,” Eklund said. “He has to create shots. We’ve said all season that good things can happen when we get to the basket, and Zach has started to believe that and gain some confidence by doing that.”

“This loss is on us, because I feel we easily missed 12-15 layups that we normally make,” he said. “We had a stretch in the second half where we turned the ball over for seven or eight straight possessions, and we weren’t playing very smart. Braham just made more plays than we did.”

Albright said he felt part of the problem was that his team was playing its first game since Dec. 19, a span of nearly three weeks.

“We practiced in that time, but it’s not like playing in a game,” Albright said. “Game speed is just different from practice speed.

Braham used this win as a springboard to a 51-43 win at Hinckley-Finlayson on Friday, Jan. 10, to move to 6-4 overall and 3-2 in Great River Conference play.

Meanwhile Rush City lost back-to-back home games, suffering an 83-58 setback to Pine City on Thursday, Jan. 9, then dropped a 56-52 decision to East Central the next night to fall to 3-5 overall and 2-3 in league action.

The girls game the following night was tight until the final minutes of the first half, when the Bombers scored 6 straight points to take a 20-14 halftime lead.

“That’s the kind of culture we’re trying to build here: We want to be a pressure team, a team that plays fast,” Braham first-year coach Zach Loy said. “We’ve got some great athletes, so I think we can run with teams and use our quickness to our advantage in a lot of different situations.

“Sometimes it’s a waiting game. Teams may be able to break the pressure early, but as they get tired, they can make mistakes. If we make the other team play 36 minutes of high-intensity basketball, we feel we’ll have success.”

The Bombers just kept scoring early in the second half and eventually pulled away to claim the 17-point victory.

“Sometimes the ball just doesn’t go through the basket,” Loy said. “But at halftime our message was to have confidence. We know we can make those shots, so have faith that it’s going to happen. And in this game, our faith was rewarded.”

Junior Hannah Cornelius was the standout for Braham, finishing with 24 points. Most of her points came at the point of the Bombers’ pressure defense as she converted Rush City turnovers into fast-break layups and free throws.

“She is incredibly important to our team, because a lot of our strategies stem from figuring out how we can use her,” Loy said. “Defensively, even if a player may think they are running free for a layup, Hannah is able to run them down and tip the ball away from behind. That allows us to take more chances, knowing you have her as a safety net.”

While eight players scored for Rush City, no one had more than Allyson Rood’s 9 points, with Madison Biermaier adding 7.

“We have a lot of young players, so we’re still learning what combination of players will be the best in specific situations,” Rush City coach Roger Keller said. “Every game we’re getting better in certain parts of the game. … We boxed out well, and we had good effort all game long. And we had a lot of players step up and contribute points, and we have to build on that.”

Braham used this victory to jump-start a 3-0 week. The Bombers earned a 58-51 victory at Hinckley-Finlayson on Thursday, Jan. 9, then topped Upsala 59-53 two nights later to even their season’s record to 6-6 overall while improving to 3-2 in the Great River Conference.

Meanwhile Rush City continued a tumble that has seen the Tigers enter this week on a nine-game losing streak after suffering a 53-30 setback at East Central on Thursday, Jan. 9, before losing at Mora 45-39 on Monday, Jan. 13.

“We know we have a lot of time this season to continue to improve,” Keller said. “And we know we will play [Braham] again this season. So we have to keep working to improve.”