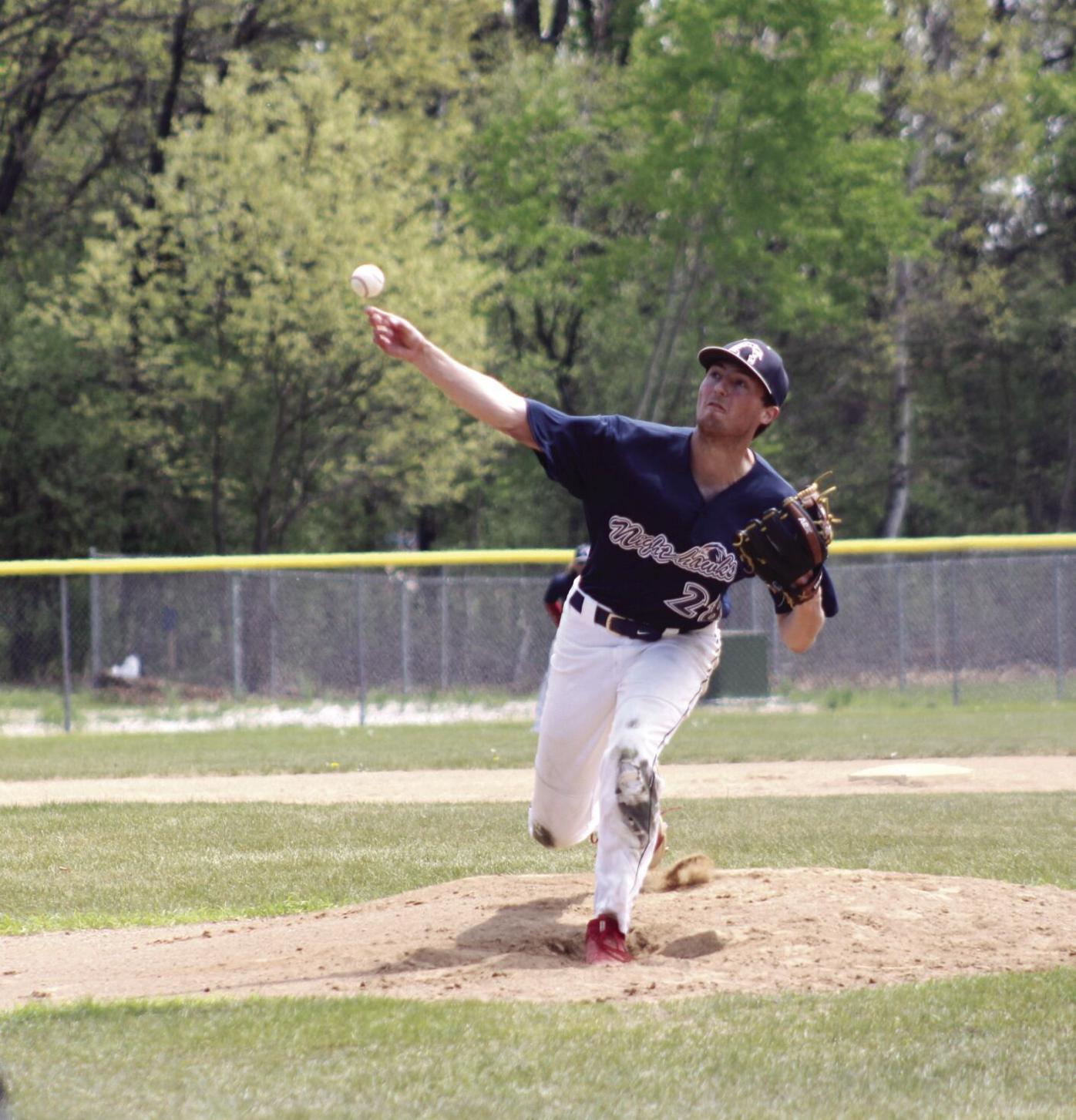 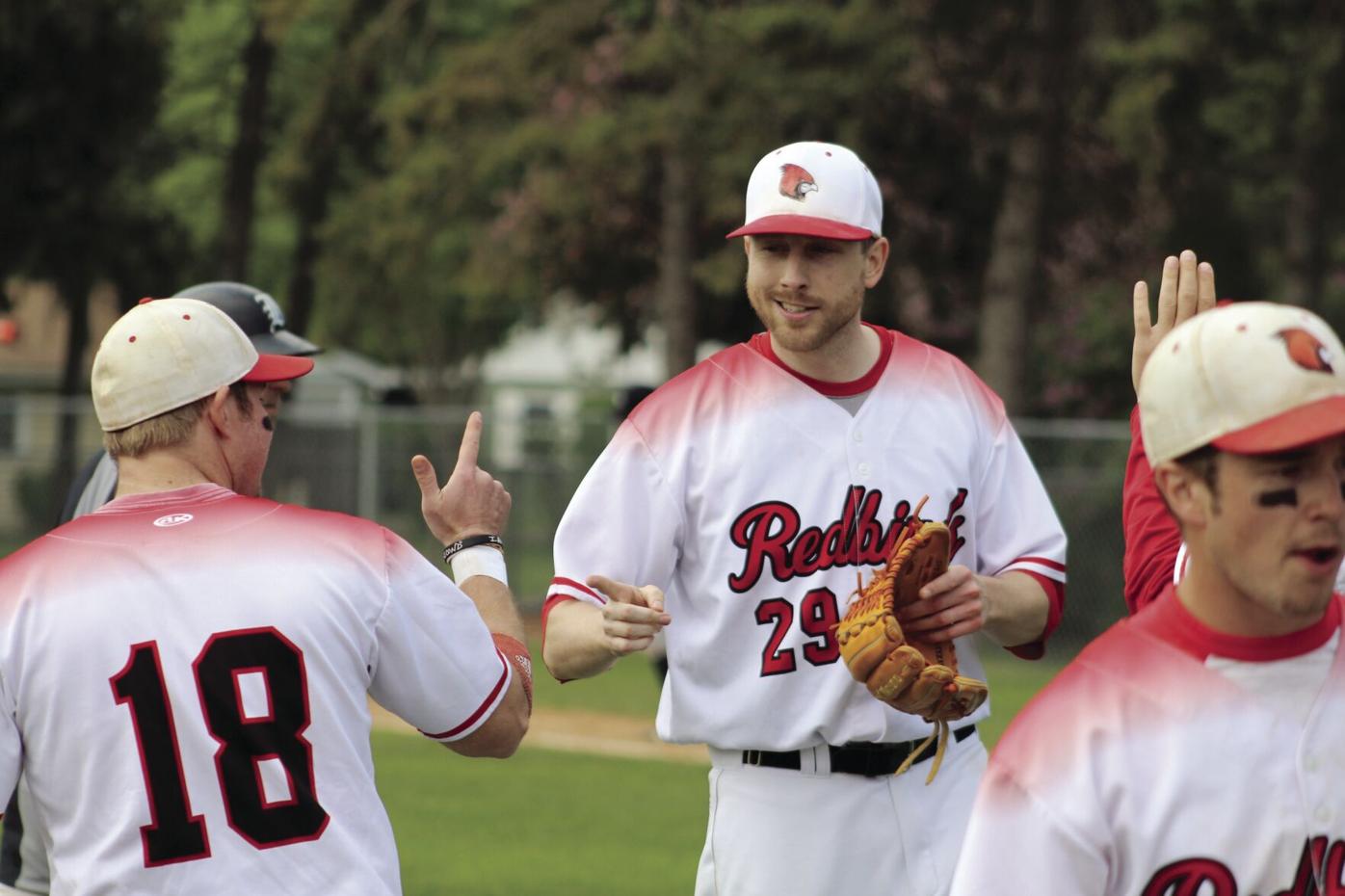 Isanti Redbirds lefty T.J. Wink accepts congratulations from his teammates in a game early this season. Wink combined with Tristen Zimbrich on a six-hit shutout in the Redbirds’ 8-0 victory at Ramsey on Sunday, June 26.

Isanti Redbirds lefty T.J. Wink accepts congratulations from his teammates in a game early this season. Wink combined with Tristen Zimbrich on a six-hit shutout in the Redbirds’ 8-0 victory at Ramsey on Sunday, June 26.

The bats of the Rum River Bandits were booming last week in three big victories.

The Bandits got their week started with a 14-6 win at East Bethel on Monday, June 21. Rum River trailed 3-1 before erupting in the late innings, scoring four times in the sixth, then adding six runs in the seventh and three more in the eighth to pull away.

Seth Plohasz had four hits in the contest, when Kevin Auth and Shawn Motl each added three. Motl also drove in three runs, while Andy Julkowski had two doubles and finished with four RBIs.

Josh Stoll got the win by allowing just six hits and three runs while striking out six in six innings of work.

Two nights later the Bandits claimed a 10-4 home victory over Nowthen, using a four-run fourth inning to build a lead before adding two runs in both the seventh and eighth innings.

Rum River closed the week with a 4-2 victory over Chisago Lakes on Sunday, June 27. Travis Evgen’s two-out, three-run double proved to be the difference in the win as the two teams combined for just 13 total hits.

Stoll earned his second victory of the week by surrendering just seven hits while notching seven more whiffs, and Mitch Ziebarth added three scoreless innings to claim a save.

The Bandits hosted Isanti at Larson Field on Wednesday, June 30, in a contest that was not completed at press time.

The Isanti Redbirds entered that contest with a three-game win streak thanks to some impressive pitching.

The week began with a 5-1 non-league victory over Centennial on Wednesday, June 23. Matt Doung shut out the Cougars on two hits over the first five frames, while James Green (three innings, one run) and Brent Tholen (one scoreless inning) held them in check the rest of the way.

T.J. Wink and Tristen Zimbrich combined on a six-hit shutout in the Redbirds’ 8-0 victory at Ramsey on Friday, June 26. Wink allowed four hits while striking out seven over six innings, while Zimbrich fanned seven of the 12 batters he faced over the final three frames.

Soderquist had three hits, including a home run, and finished with two RBIs, as did Joe Tuholsky and Blaze Hogie.

The next day Phil Bray threw a complete-game two-hit shutout as Isanti beat Monticello 5-0. Bray did walk six but struck out a baker’s dozen to earn the win.

Soderquist and Nick Hoffman each had three hits in that victory, while Duong added a pair of hits.

Isanti finished the week with a 5-3 victory over Princeton on Sunday, June 27. Logan Kalis limited the Panthers to just five hits and two runs, only one of which was earned, while striking out seven in the first seven innings, while Chris Olean added five whiffs over the final two frames.

Green led the offense with three hits, while Hoffman added a pair of hits.

The Braham Snappers began the week with a 12-4 home loss to St. Francis on Saturday, June 26. The Snappers scored four runs in the second to build an early lead, only to see the Silverbacks answer with three runs in the third and five more in the fourth before clinching the contest with a four-run seventh.

Brady Yrjo and Mike Strelow each had a double for the Snappers, while Sam Widman collected two of the team’s five hits.

Braham played at East Bethel on Monday, June 28, and two days later played at Hinckley, and neither contest was completed at press time.

The North Branch Nighthawks split two games played at Hibbing on Saturday, June 26. The Nighthawks lost to the host team by a 12-9 score, but rebounded to beat Princeton 4-0.

Jimmy Skroch threw a complete-game shutout to beat the Panthers, giving up just four while fanning 12. Skroch also had two hits, while Nick Pilz had three hits and Josh Lauer added a pair of base knocks.

All four teams will be taking a break for the Fourth of July holiday before returning to action the following week.

Isanti will return to action first, hosting East Bethel on Tuesday, July 6, and then entertaining Hinckley the following evening, with both games starting at 7:30 p.m. The Redbirds will play at Quamba on Friday, July 9, before returning home two days later to host Mora in a 4 p.m. start.

North Branch will play at Quamba on Wednesday, July 7, before hosting St. Francis on Saturday, July 10 in a 1 p.m. contest.

Rum River returns to the diamond on Thursday, July 8, when the Bandits play at St. Francis, and they follow that with a contest at Hinckley two nights later.

The next scheduled contests for Braham are three road contests set for Saturday and Sunday, July 10-11. The Snappers will play at Mora on Saturday starting at noon, then travel to Hibbing for a twinbill against the Knights the next afternoon beginning at 1 p.m.