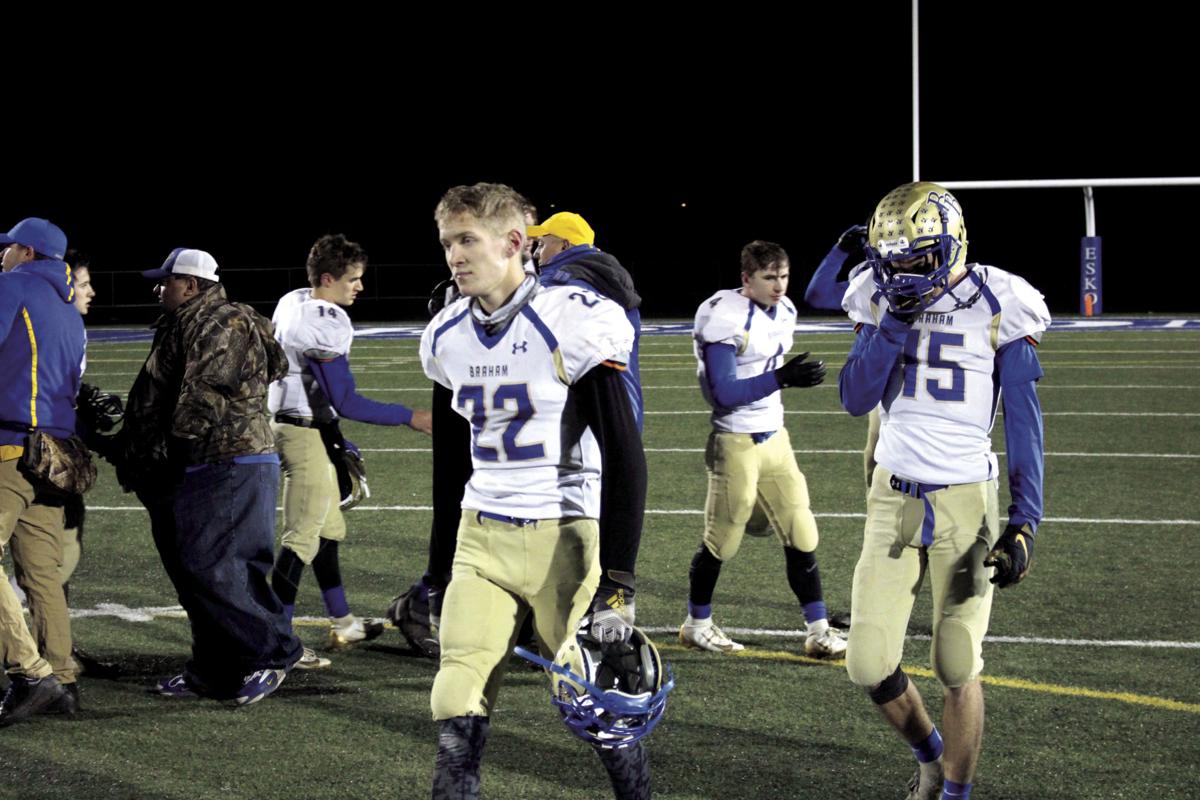 Braham seniors Ethan Lindquist, left, and Brayden Doble walk off the field for the final time in their high school football career following the Bombers’ loss to Deer River in the Section 7A championship game played at the Esko Sports Complex on Friday, Nov. 1. 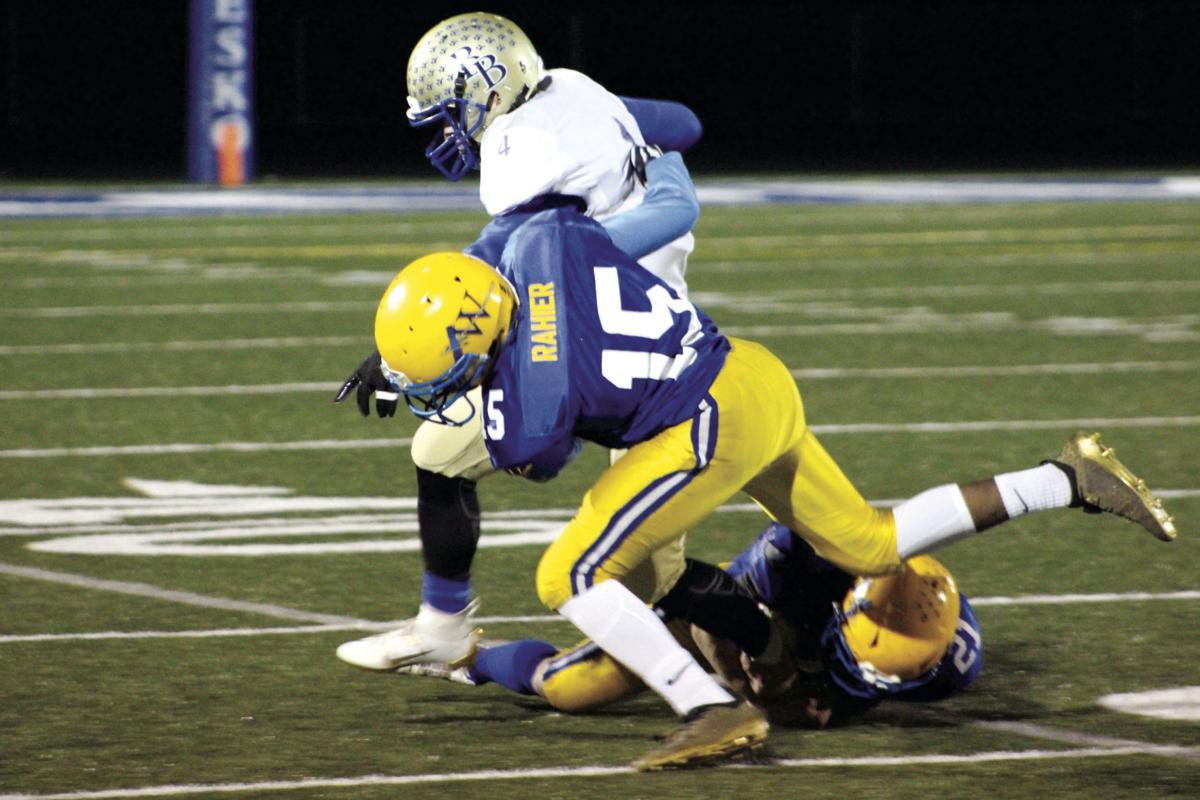 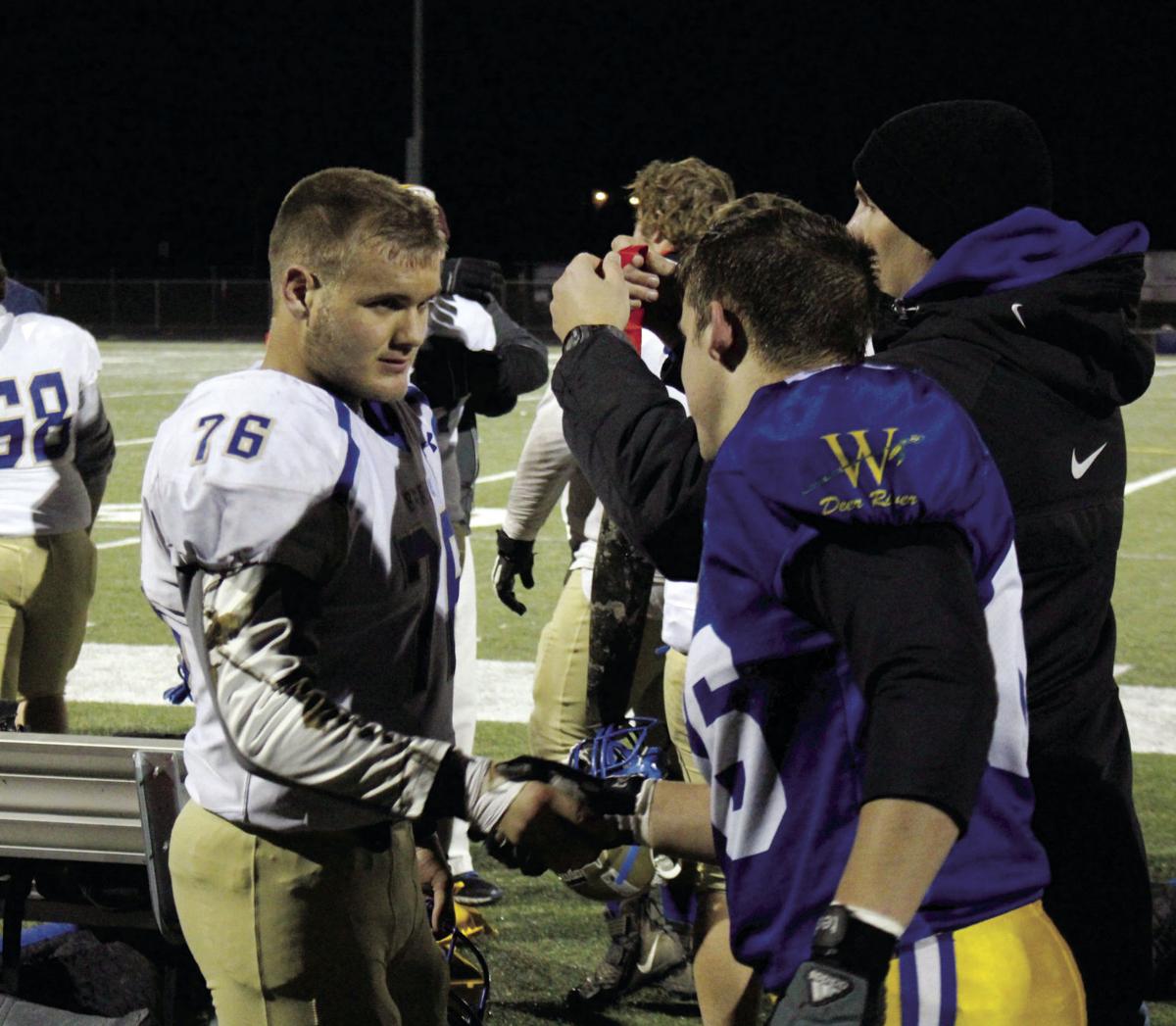 Masyn Londgren shakes hands with a Deer River player during the medal ceremony following the Section 7A title game.

Braham seniors Ethan Lindquist, left, and Brayden Doble walk off the field for the final time in their high school football career following the Bombers’ loss to Deer River in the Section 7A championship game played at the Esko Sports Complex on Friday, Nov. 1.

Masyn Londgren shakes hands with a Deer River player during the medal ceremony following the Section 7A title game.

It seems unfair, and somewhat cruel, that a fine season for the Braham football team had to end the way it did. The ending was swift, sudden and sorrowful for the Bombers, who suffered a 36-0 loss to Deer River in the Section 7A championship game at the Esko Sports Center on Friday, Nov. 1.

“Give the credit to Deer River for a great game,” Braham coach Shawn Kuhnke said afterward. “But I told our guys not to hang their heads. Be proud of what you accomplished.”

Braham entered the contest hoping to avenge their only loss of the regular season, a 20-12 home setback against the Warriors in late September. Instead, the Bombers ran into problems from the beginning of this contest: Josh Klingensmith was injured and lost for the game on the game’s opening kickoff.

The senior captain started on offense, at center, and on defense at inside linebacker.

“It becomes a domino effect: We take one guy and have to slide him into those positions, and we have to bring a new guy onto the field,” Kuhnke said. “I feel badly for Josh, because he didn’t get to finish his senior year the way he wanted.”

Nobody on Braham’s side of the field wanted what followed: Deer River scored twice in the first quarter, once on a 25-yard pass from Blake Fox to Trevor Michienzi midway through the period, then on an 11-yard TD jaunt by Austin Rasley late in the quarter.

The Warriors then carried a 20-0 lead into halftime after Fox connected on a 2-yard toss to Michienzi with 2:49 left.

Braham never got its offense untracked. The Bombers collected just 149 yards of total offense, including just 28 yards rushing, and finished with only six first downs in the game.

“They were just more physical than we were tonight, and in football that’s an important part of the game,” Kuhnke said.

In the third quarter, Deer River’s Rasley scored on a 38-yard run, and midway through the fourth Michienzi found the end zone from 2 yards out to start a running clock.

“Let’s have fun,” Kuhnke said after that score, and the Bombers opened the offensive playbook to run reverses, a flea flicker and just about every trick play imaginable, but Braham was not able to avoid the shutout that brought their season to a close with a 9-2 overall record.

“We’ve come a long way this year,” Kuhnke said. “Even though things didn’t go the way we planned, we’ve grown a lot and we had a lot of successes this season.”

The Bomber coach gave much of the credit for those successes to the team’s seniors, a group that included Klingensmith as well as Luke Bendickson, Ben Carlson, Jack Carlson, Braden Doble, Ethan Johnson, Ethan Lindquist, Reed Riesing and Michael Tilkens-Rogstad.

“I’m proud of our seniors. They’ve led from day one, and that’s why we were here,” Kuhnke said. “They were leaders on the field, but more importantly, they were just good people. Good people in the locker room, good in school, and that’s what counts. When you have a group of seniors who are a class act like they are, that’s what is important.”