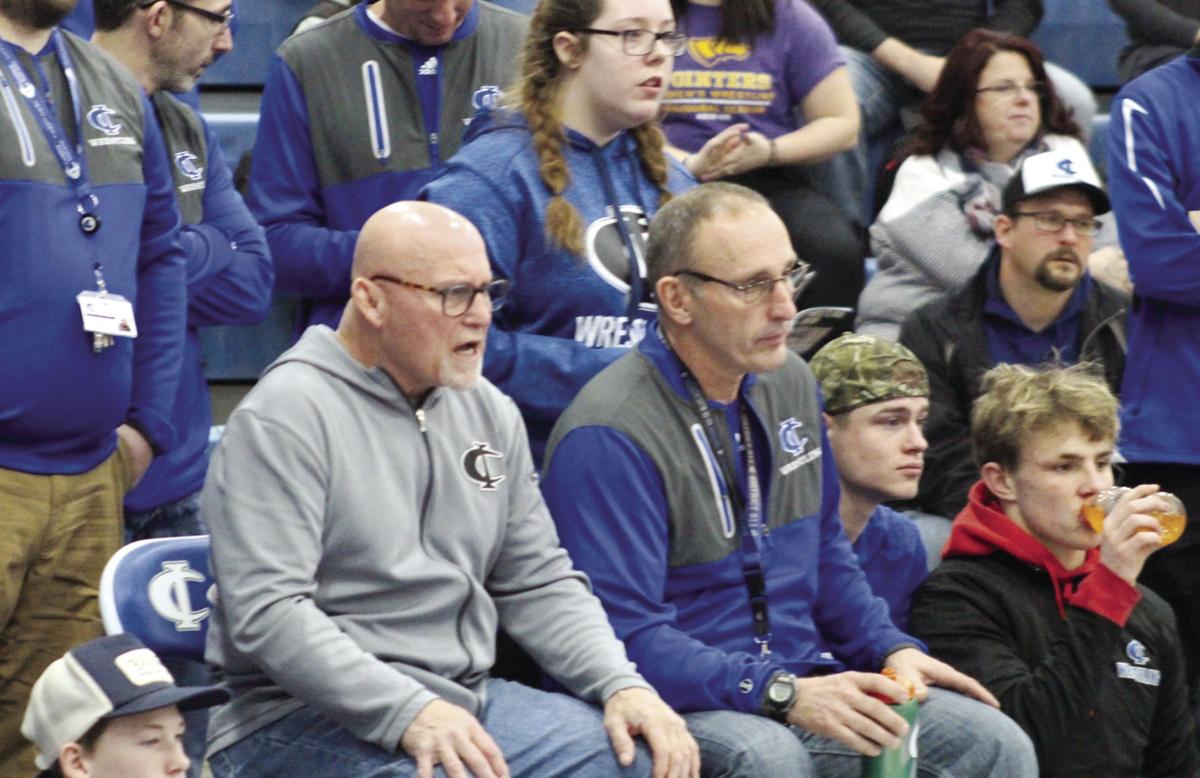 Cambridge-Isanti head wrestling coach Neil Jennissen, on the right in the blue sweatshirt, watches one of his wrestlers compete in a match earlier this season. The Bluejackets handed Jennissen his 600th career dual-meet victory last week. Photo by John Wagner 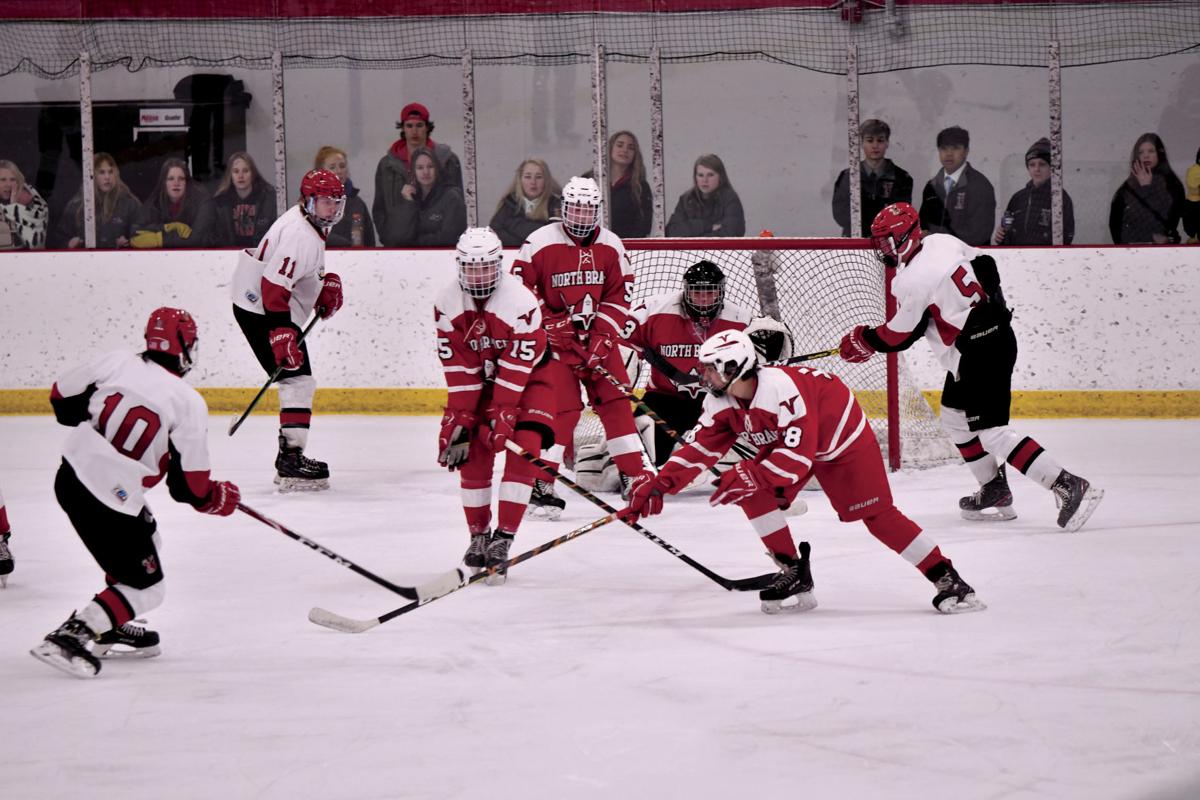 North Branch forwards Matt Dekanick, No. 15, and Loghan Croal, No. 18, look to keep a Monticello shot from reaching the goal in the Vikings’ 7-1 loss on Friday, Feb. 7. Photo by Jorge Perales

Cambridge-Isanti head wrestling coach Neil Jennissen, on the right in the blue sweatshirt, watches one of his wrestlers compete in a match earlier this season. The Bluejackets handed Jennissen his 600th career dual-meet victory last week. Photo by John Wagner

North Branch forwards Matt Dekanick, No. 15, and Loghan Croal, No. 18, look to keep a Monticello shot from reaching the goal in the Vikings’ 7-1 loss on Friday, Feb. 7. Photo by Jorge Perales

This past week was a good one for the Cambridge-Isanti wrestling team.

The Bluejackets claimed a pair of dual meet victories on Friday, Feb. 7. Those two victories give longtime C-I wrestling coach Neil Jennissen 600 wins in dual meets over his Hall of Fame career.

The wins also clinched a winning record in dual matches for the Bluejackets, a string that now extends for 30 straight seasons.

It also was a good week for two Alpine skiers who both qualified for the state tournament after fine performances at the Section 7 Championship hosted by Giants Ridge on Tuesday, Feb. 4.

Cambridge-Isanti’s Cierra Karels punched her ticket for the state meet by finishing third thanks to a combined two-run time of 1:19.81.

And Hailey Baas of Cambridge Christian earned a state berth by placing sixth thanks to a combined time of 1:22.59.

Here is a look at how these teams and other area squads fared this past week.

Braham enjoyed a pair of narrow wins last week, beating East Central by one point on Monday, Feb. 3, before edging Rush City in overtime on Friday.

The Bombers beat East Central 51-50 as eighth grader Nickole Duvernay hit a pair of free throws with 10 seconds left to give her team the lead. Duvernay finished with 11 points, while junior Hannah Cornelius scored 14 and Arin Zimpel added 10.

On Friday Duvernay again was the hero, connecting on two free throws with five seconds left to force overtime. Cornelius again led the way with 21 points, while Julia Kuhnke scored 14 and Duvernay finished with 9.

Jana Swanson continued her run of double-doubles with 13 points and 11 rebounds in the win at Big Lake, while fellow senior Amme Sheforgen also had a double-double with 11 points and 12 boards.

North Branch began the week with an 83-28 loss to Becker, which is ranked No. 2 in the state in Class 3A, on Monday, Feb. 3. Harmony Folstad and Paige Peaslee each had 6 points for the Vikings in that contest.

The Vikings finished the week with a 68-53 loss to Princeton on Friday, Feb. 7. Carlson scored 19 points in that contest while Bunes added 15.

“The girls stepped up and had a much more competitive game with Princeton than the first time we played them,” North Branch coach Alison Trampe said. “We played extremely hard and were only down 3 with five minutes to go in the game.”

Cambridge-Isanti finished the regular season with a 145.1-140.2 home victory over Monticello on Tuesday, Feb. 4.

Dusty Bergstrom and Parker Sell scored in the first period to give the Dragons a 2-1 lead. Seth Linnell scored in the second period and Peyton Smetana scored late in the third while Alex Laven stopped all but one of the 19 shots he faced to earn the victory.

North Branch had a tough week, losing a home contest to Chisago Lakes before dropping road games at Monticello and at Princeton.

Against Chisago Lakes on Tuesday, Feb. 4, both teams scored three goals in the second period, with Lawton Garin, Tucker Sachs and Joey Kerchner notching the goals for the Vikings. But the Wildcats scored twice in the final period, including an empty-net goal in the final eight seconds, to claim the victory.

In the Monticello contest, Sachs scored just 4:51 in the contest, only to see the Magic respond with three goals in the first period on the way to a 7-1 victory. The following evening Sachs again scored the lone goal in a 5-1 loss to Princeton.

Cambridge-Isanti also had a tough week, losing at home to St. Francis and on the road to Chisago Lakes.

Easton Parnell scored a goal in each of the first two periods against St. Francis on Tuesday, Feb. 4, and Jacob Ziebarth gave the Bluejackets a lead with his goal just 42 seconds into the third. But the Knights scored the final three goals to claim a 5-3 victory.

Two days later, Chisago Lakes erupted for seven goals in the second period on the way to an 11-2 win. Luke Pierson and Wyatt Lindell scored for C-I.

Cambridge-Isanti saw its season come to a close with a 6-0 loss to North Wright County in the opening round of the Class 2A Section 7 Tournament on Thursday, Feb. 6. North Wright County, which was ranked eighth in the final state poll of the year, scored three goals in the first period and cruised to the victory despite 36 saves by the Bluejackets’ Jordan Millam.

And St. Francis-North Branch saw its season end in the Class A Section 5 Tournament with an 11-0 setback to Breck, the top-ranked team in Class A, in a game in which Laura Boersma was peppered by a whopping 40 shots in the first period.

Cambridge-Isanti swept a triangular hosted by Sartell on Friday, Feb. 7, knocking off Sauk River-Rice 36-30 before besting the host school 39-27.

Among the double winners for the Bluejackets at this event were Romeo Nordquist at 152; Jimmy Brown, who posted one pin each at 160 and at 170; Eli Greenberg, who had a technical fall at 182 and a pin at 170; and Easton Johnson, who won twice at 195.

It was a tough week for North Branch, which lost twice in a triangular at Rush City-Braham on Tuesday, Feb. 4, losing to Centennial 48-36 before dropping a 45-36 decision to the host Tigers. Three days later the Vikings suffered three losses in a quad meet sponsored by Zimmerman, losing to Milaca-Faith Christian 48-28, then to Princeton by a 66-12 margin before dropping a 52-30 decision to the host school.