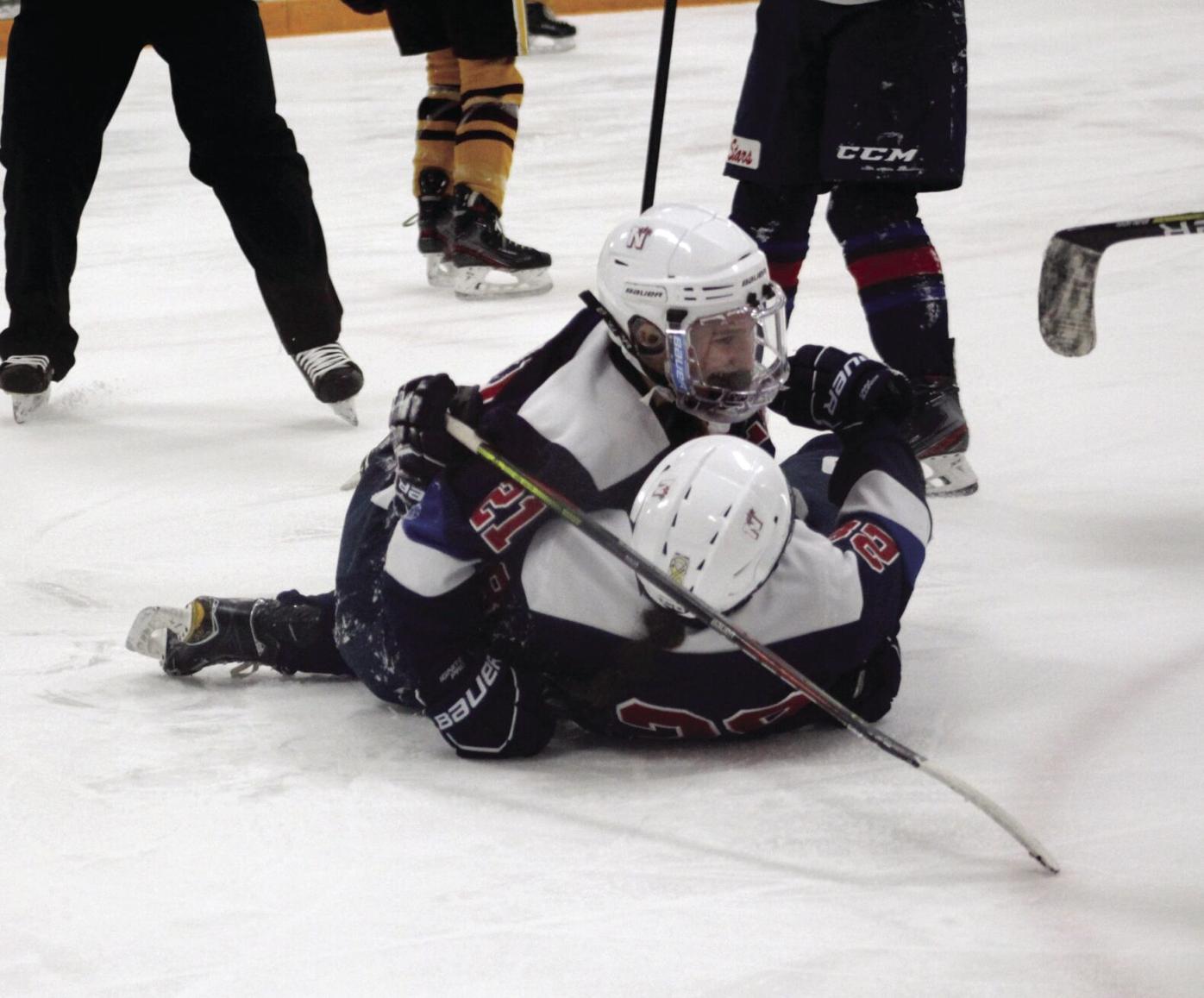 Northern Tier Stars senior Gabby Giving, No. 21 on top, hugs senior teammate Ashton Parnell after Giving scored the lone goal in the Stars’ 5-1 loss at Forest Lake in the Class 2A Section 7 quarterfinals on Tuesday, March 16. Photos by John Wagner 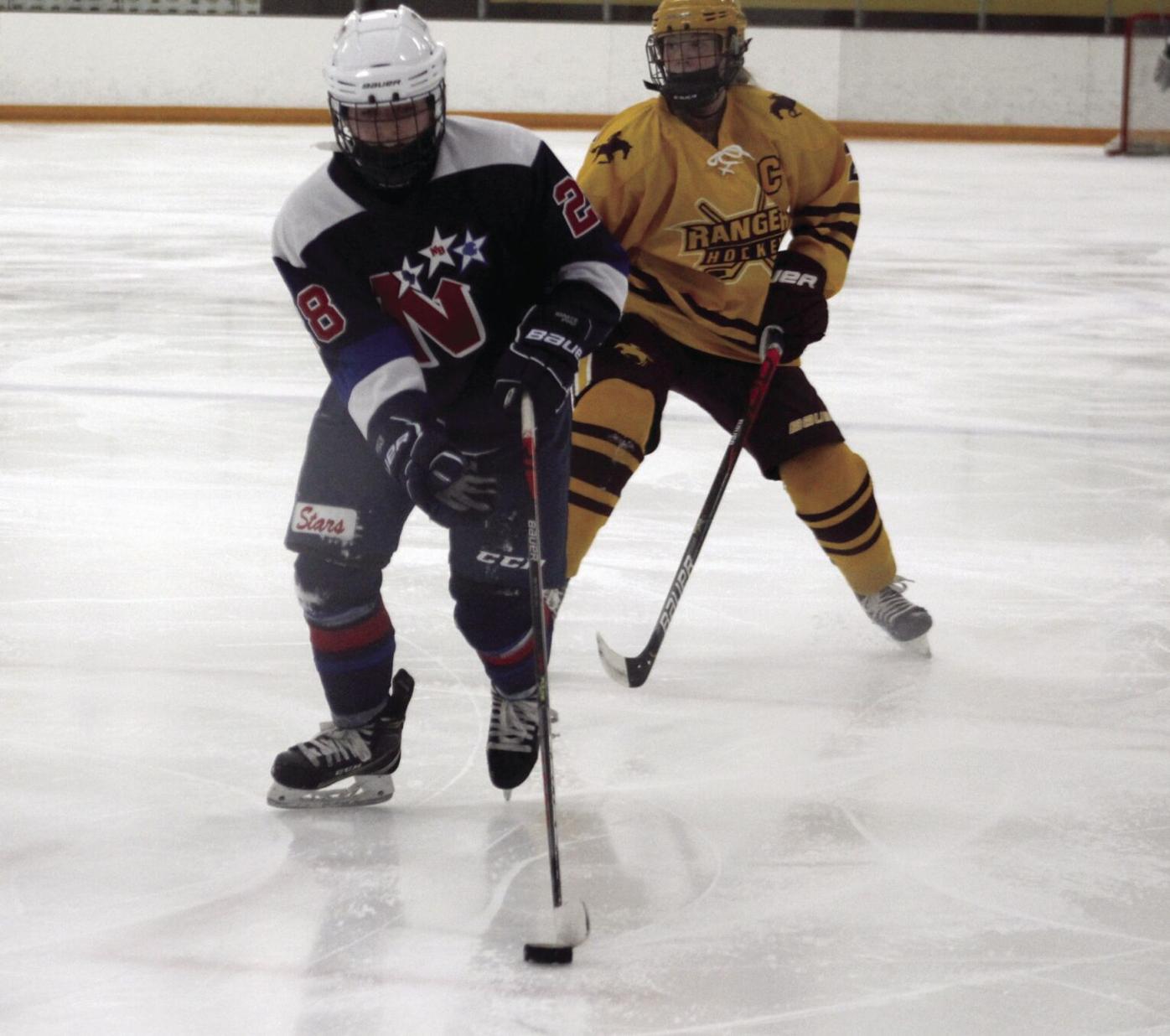 Northern Tier Stars senior Gabby Giving, No. 21 on top, hugs senior teammate Ashton Parnell after Giving scored the lone goal in the Stars’ 5-1 loss at Forest Lake in the Class 2A Section 7 quarterfinals on Tuesday, March 16. Photos by John Wagner

The bad news started late in the day on Monday, March 15, when the North Branch boys team confirmed it would not be able to play in its Class A Section 5 first-round tournament game against Mora due to COVID-19 concerns.

“Our hearts hurt for our guys, especially for our seniors, who gave so much and deserved a better ending than this,” Vikings coach Jacob Mars said.

The following evening the Northern Tier Stars, the girls hockey co-op that includes players from both Cambridge-Isanti and North Branch as well as St. Francis, saw its season come to a close with a 5-1 loss at Forest Lake in the first round of the Class 2A Section 7 tournament.

The Stars, the No. 7 seed in the second, played the second-seeded Rangers tough.

“We were looking to keep their bigger players out of the middle of the ice, and for the most part we did that,” coach Cory Denney said. “But we did have a couple of breakdowns, and when that happened, they capitalized. They’re a good hockey team.”

The Stars allowed just one goal in the first period, then rebounded after allowing a pair of goals in the second to get a goal by senior Gabby Giving at 16:36 of that period.

But that was the only goal the Stars would score, while Forest Lake added a pair of third-period goals. Junior Meghan Gibb finished with 38 saves, and Stars coach Cory Denney praised his team’s performance, especially the nine seniors on the roster.

“Overall, I think we had a great season,” he said. “Being in our first year of this co-op, I think nobody thought we would do what we did. Even though our seniors may come from different schools, they knew one another because they played together or against one another. I couldn’t have asked for a better group of seniors.”

Then on Thursday, March 18, the Cambridge-Isanti boys suffered a painful 4-2 home loss to Pine City in the Class A Section 5 quarterfinals.

That contest was tied 1-1 after the first period thanks to a goal by the Bluejackets Nathaniel Bauer at 2:47 of the period – just 37 seconds after the Dragons had scored. But Pine City scored twice in the second period, and the Bluejackets managed only a power-play goal by junior Treyten Green at the 8:38 mark.

And C-I, the No. 3 seed, was unable to get the equalizer in the third, while the sixth-seeded Dragons added an empty-net goal with just four seconds left.

Senior Bobby Hendricks made 40 saves for Cambridge-Isanti, which finished the season with an 11-7-1 overall record while finishing third in the Mississippi 8 with an 8-6 mark good for 16 points.

“The season came to an abrupt end, but the memories will last forever,” coach Jarad Ziebarth said. “I wish to thank the players for their time and dedication to improving over the offseason. I especially would like to thank the seniors for a very special year.

“Because of a lack of numbers in the grades above them, many of these seniors were thrown into varsity roles prematurely and have taken their share of bumps and bruises throughout the years. This group paved the way for the players behind them to enjoy a JV and varsity team for many years to come. They are a great bunch of kids that will be missed.”