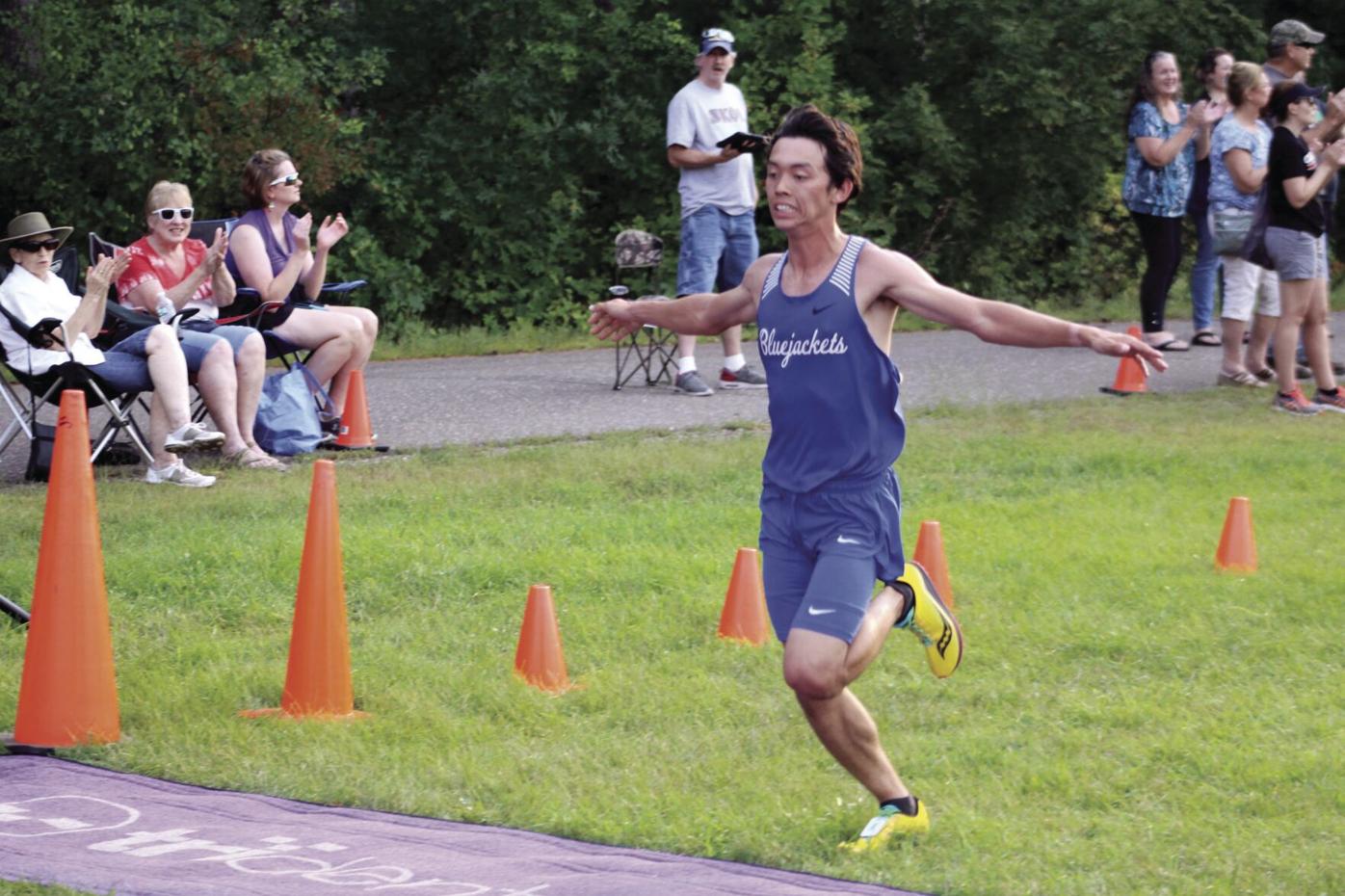 Cambridge-Isanti senior Zander Gallmeier stretches for the finish line at the Cambridge Invitation on Friday, Sept. 10. Gallmeier led the Bluejackets by finishing 13th on the 5-kilometer course. Photo by John Wagner 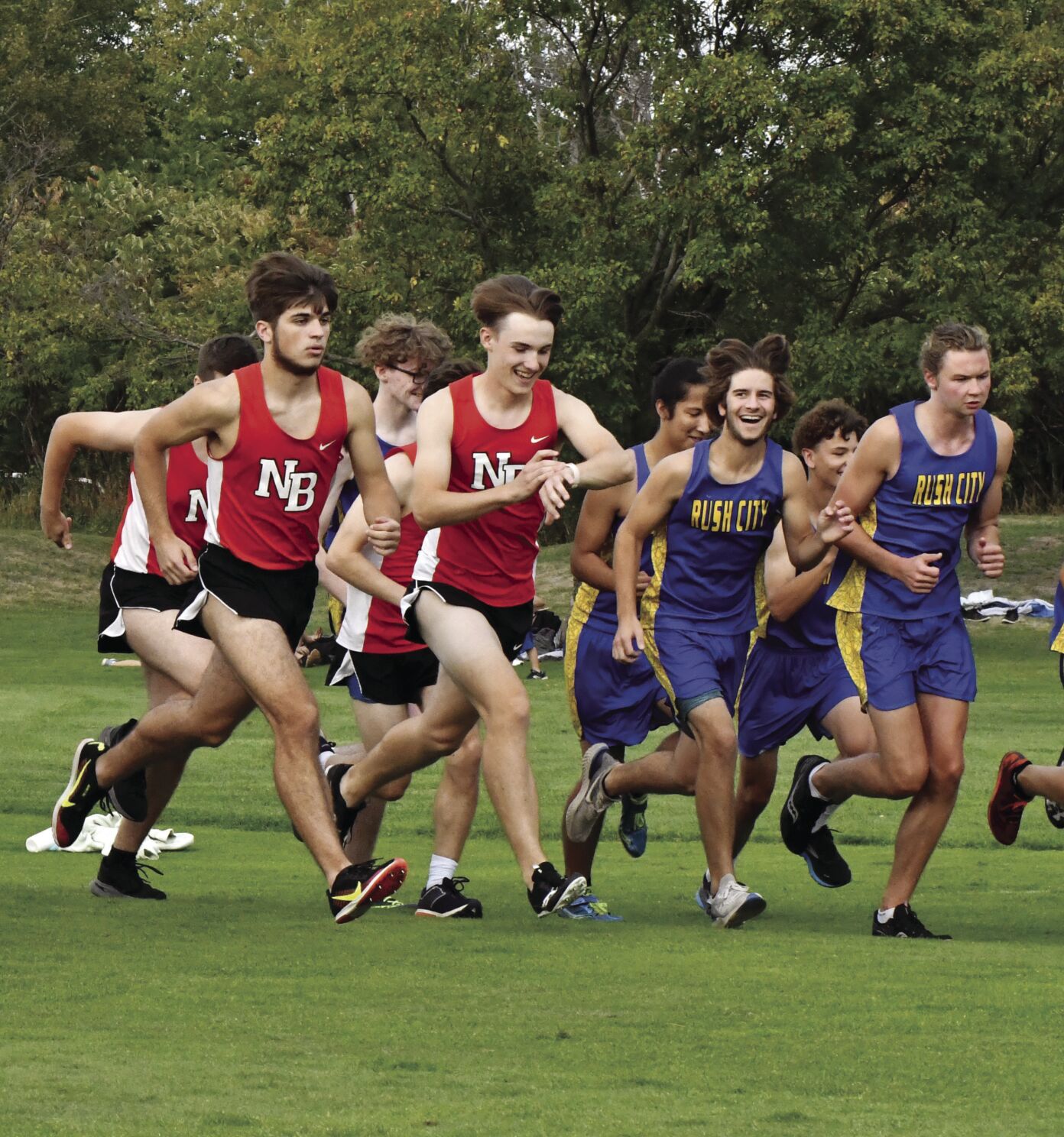 Runners from both North Branch and Rush City take off at the start of the Pine City Invitational on Thursday, Sept. 9. The Vikings placed eighth at the meet, while the Tigers finished ninth. Photo by Jorge Perales 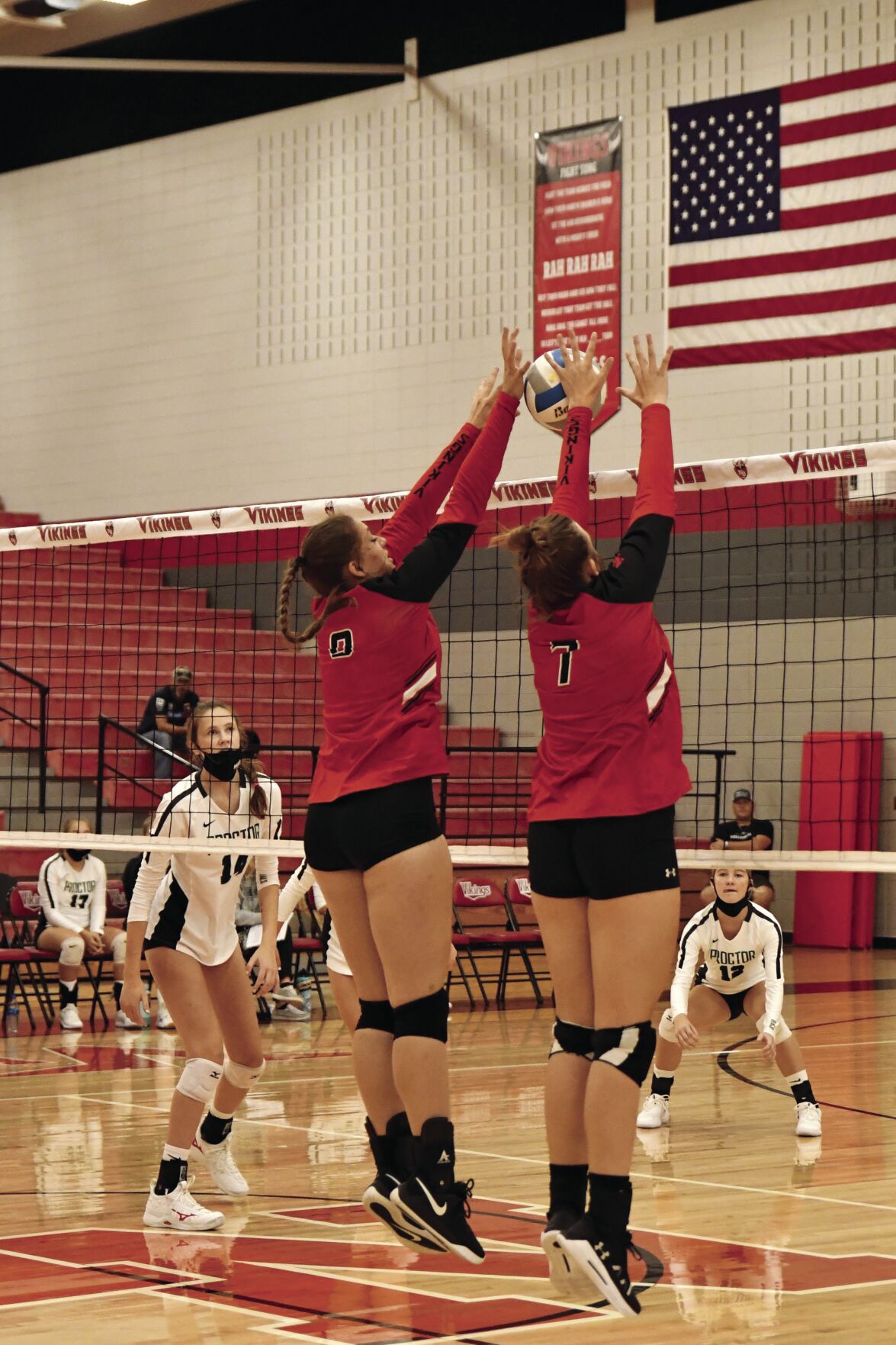 Junior Lauren Hicks, wearing No. 9, and senior Rylee Ramberg, wearing No. 7, combine for a block against Proctor at North Branch’s tournament on Saturday, Sept. 11. Photo by Jorge Perales

Cambridge-Isanti senior Zander Gallmeier stretches for the finish line at the Cambridge Invitation on Friday, Sept. 10. Gallmeier led the Bluejackets by finishing 13th on the 5-kilometer course. Photo by John Wagner

Runners from both North Branch and Rush City take off at the start of the Pine City Invitational on Thursday, Sept. 9. The Vikings placed eighth at the meet, while the Tigers finished ninth. Photo by Jorge Perales

Junior Lauren Hicks, wearing No. 9, and senior Rylee Ramberg, wearing No. 7, combine for a block against Proctor at North Branch’s tournament on Saturday, Sept. 11. Photo by Jorge Perales

Area cross-country teams have started the process of putting their lineups together for the coming season. And in some cases, those lineups have been “partial” lineups as younger runners slowly become accustomed to competing against older opponents.

Cambridge-Isanti hosted its invitational meet at Isanti Middle School on Friday, Sept. 10, and in the girls race, the Bluejackets had only three runners in the varsity race.

“We let a bunch of girls who will eventually run varsity instead run in the middle school race,” C-I coach Josh Bowman said. “In this race, they got to be middle schoolers. By the end of the year, we hope that they have become varsity runners.”

It is worth noting that Cambridge-Isanti seventh grader Molly Larson won the middle school race with a 2-mile time of 14:12.4.

In the boys race, the Bluejackets finished third with 83 points. A strong Centennial squad edged Duluth East 24-35 to win the team title.

“We’ve got a whole season to get where we want to be,” Bowman said. “We’re not going to get there in the next week, or the week after that, but hopefully in four or five weeks we’ll be sitting pretty.”

North Branch, Braham and Rush City all competed at the Pine City Invitational on Thursday, Sept. 9.

On the boys side, North Branch finished eighth with 190 points, while Rush City took ninth with 199. Foley nipped Chisago Lakes 58-60 to win the team title.

In the girls race, none of the local teams were able to field a full squad in a contest Spectrum won with 32 points.

North Branch senior Cora Hudella finished 21st with a time of 23:47, while Braham freshman Ava Johnson was 37th with a 25:24 clocking. Senior Shelby Holmstrom was the top runner for Rush City, placing 45th with a time of 26:19.

The Cambridge Christian soccer team opened the week with a 2-1 home victory over Metro United on Tuesday, Sept. 7. Reece Bourke and Michael Newton each scored a goal for the Warriors, while goalkeeper Tate Nowacki made 17 saves to preserve the win.

The Warriors then suffered an 8-0 loss at Fourth Baptist on Thursday, Sept. 9, but rebounded to play well in a narrow 3-2 loss to Woodcrest the following afternoon.

J.J. Sedlar scored both goals for Cambridge Christian against Woodcrest, while Tate Nowacki stopped 23 shots to keep his team in the match.

The North Branch girls soccer team remained unbeaten thanks to a pair of victories last week, including a 5-0 home win over Cambridge-Isanti on Thursday, Sept. 9.

Eighth grader Sharis Garcia Velazquez made two saves to collect the clean sheet in that victory.

Two days earlier, the Vikings claimed a 2-1 victory at Forest Lake behind goals by Gerten and senior Emmie Meyer. Sharis Garcia Velazquez made four saves in that win.

“One thing our girls have done really, really well is that, no matter if the game is going for us or against us, they push through it,” coach Josh Kopp said. “The girls started to develop that habit last season, and they’ve carried it into this season.”

Cambridge-Isanti put together a strong week that began with a 7-0 victory over North Branch on the Vikings’ home court on Tuesday, Sept. 7.

Cambridge-Isanti followed that win with a 7-0 sweep at Monticello two days later. The Bluejackets won in straight sets in all four singles flights, losing just seven games, while only one of the three doubles matches reached a third set.

C-I capped the weekend with wins over Blaine, Andover and Forest Lake in a tournament hosted by Blaine on Saturday, Sept. 11.

“This was a great week on the courts for Bluejacket tennis,” coach Thea Lowman said. “We earned two conference match wins, and we earned three section match wins that will help us when section seedings are set.”

Senior Lindsey Bunes led the offense with 14 kills and added 12 digs. The Vikings finished with 10 service aces in that match, with junior Leah Kent leading the way with four.

Bunes played well for the Vikings in the tournament, leading the team with 38 kills with adding 27 digs. Senior Paige Peaslee was next with 25 kills, while senior Maddie Helin had 72 assists.

Braham claimed its first win of the season, knocking off Milaca in five sets on Tuesday, Sept. 7. Juniors Julia Kuhnke and Ashlynn Giffrow led the offense with 11 and 10 kills, respectively; senior Lacy Cuda had 23 digs, while Giffrow finished with 20 and Kuhnke had 17.