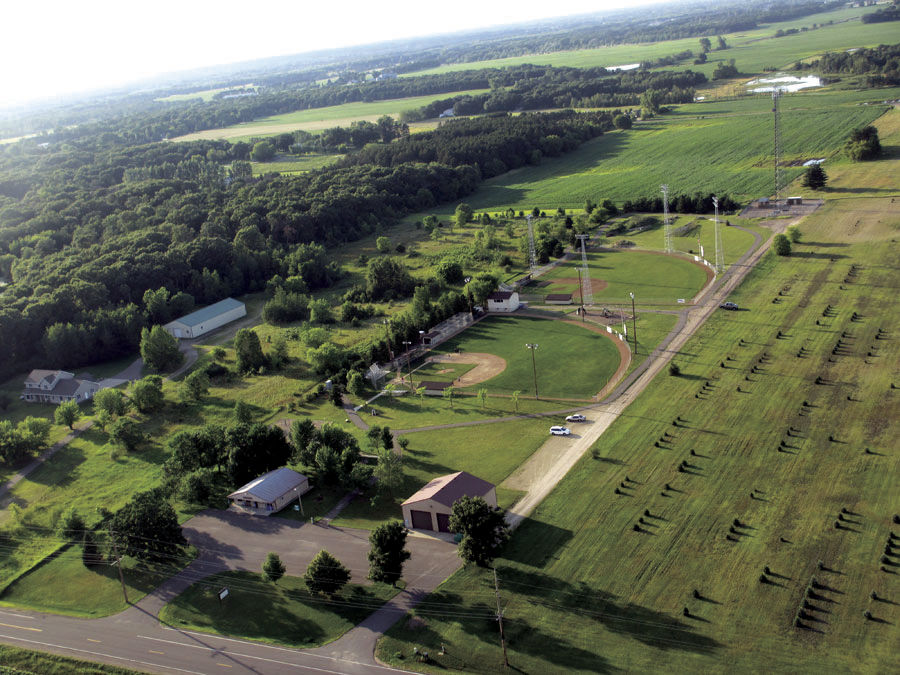 An aerial view of Mann Field taken in 2013 shows the original field dedicated in 2008, bottom, and the field that was opened that year. Since that time a third field has been added to the north, or upper right, of these two fields. 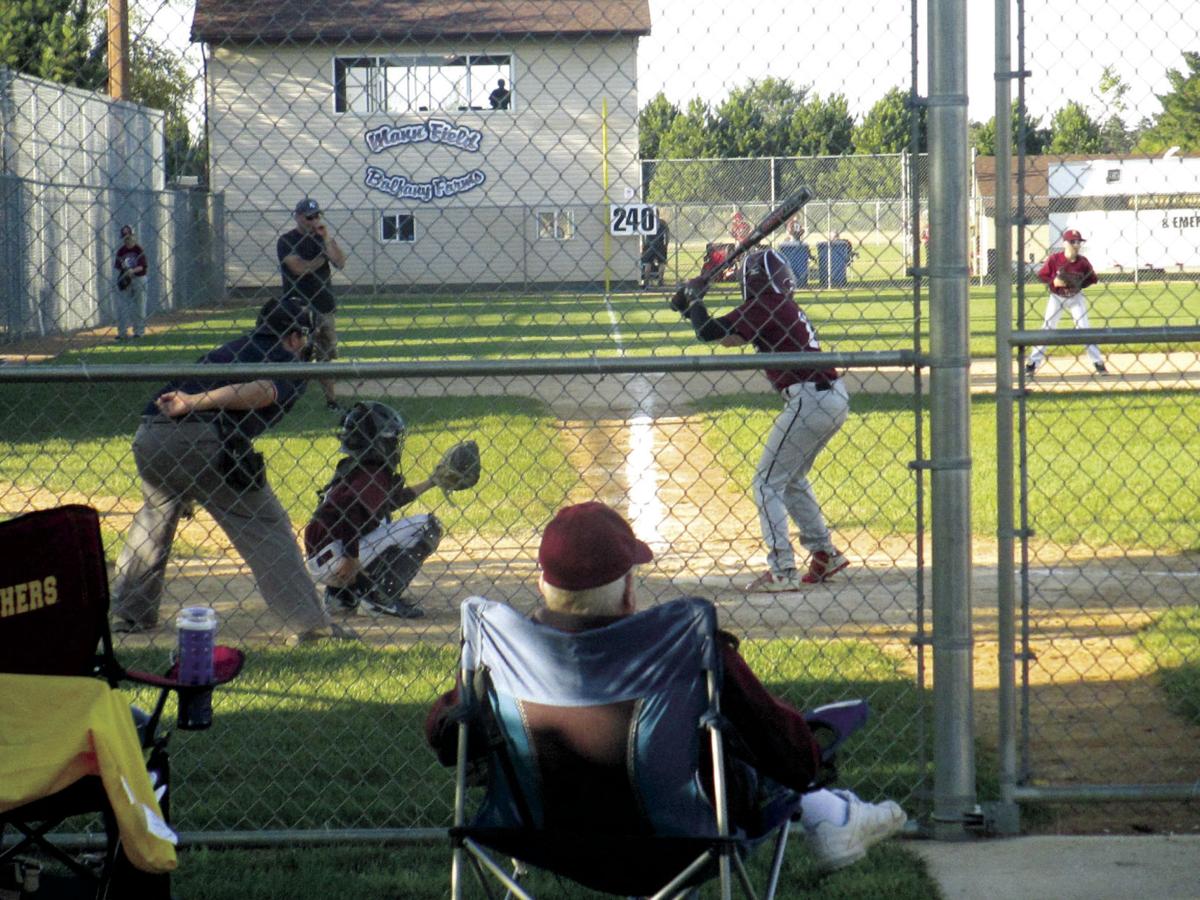 An aerial view of Mann Field taken in 2013 shows the original field dedicated in 2008, bottom, and the field that was opened that year. Since that time a third field has been added to the north, or upper right, of these two fields.

You would expect things to be quiet at Mann Field these days. After all, it’s a baseball facility, and the thermometer, the winds and the weather clearly indicate it is not baseball season – but Russ Mann said that is not the case. This is a busy time of the year.

“This is usually the time we can get construction work done,” he said. “We start preparing for fundraising. When the season runs from mid-April to mid-October, that doesn’t give you a lot of time to do maintenance and construction.”

Mann Field is no ordinary baseball park. It was voted the best Little League ballpark in Minnesota in a WCCO viewers’ poll a few years back, and it also won an award for innovation by local government given by the Humphrey School of Public Affairs at the University of Minnesota.

The three fields encompassed by the complex continue to expand in a variety of ways. The third field itself is relatively new, while Mann and those closely involved with the field think of new amenities, as well as improving upon current ones.

It is an amazing complex, with amazing stories as to how it was built and how it continues to grow.

It all began in 2007, when Russ Mann was taking his son to Little League games.

“When my son played Little League ball, the fields were really ‘tough,’” Mann said. “I always wanted something better for the kids.”

So he worked with Athens Township officials and a number of friends, family, and supporters to create the first field, which was dedicated on May 31, 2008. But that route was far from easy.

“When you’re trying to get help from people who can help you, and they don’t, I guess I have learned to be disappointed,” Mann said. “But you may be disappointed by nine people, and the 10th does something miraculous – and that can restore your faith. The folks who do help are incredible.”

And Mann said a number of people deserve mention for their unwavering support.

“I could never have done it without my wife, Ann, who has supported me – and even worked on the field with me,” he said. “And she has been supportive despite all of the lost time, where we could have done other things. She has understood. And she’s baked thousands of chocolate chip cookies for kids. …

“The Athens Town Board has always been very supportive of this project. And Steve and Marlys Balfany of Athens have helped me tremendously. Also I’ve had some great coaches who respect the field and take care of it.”

Mann said there were hardships in the process of creating the facility, but some of those struggles made the field the special place it is today.

“For example, the building inspector at that time insisted we had to have sidewalks,” he explained. “You can look everywhere, and you won’t find a field that has sidewalks. … So we put in wide sidewalks from the walking paths to the bleachers.

“And over time I realized there were a number of people in wheelchairs coming to games. Those sidewalks have had a positive impact.”

The facility’s second field took shape in 2013, and last season a third field was added to the north end of the complex that proudly bears the Mann family name.

“Baseball was something I enjoyed with my dad, Ivan, and my grandfather, Herman,” Russ Mann said. “I learned from them about doing things for others, about helping others. I think they would be tickled by this field.”

Most baseball teams want to play home games. And the reasons are obvious: Easy travel, familiar surroundings and last bats result in a home-field advantage for teams.

But Mann Field has become a real home-field advantage for local teams as opponents give up home games to play here.

“A typical regular-season for a travel baseball team is 16 games, and I’ve never had a season with less than 10 home games,” said Matt Braaten, the facility’s field operations manager and a longtime area coach. “Usually it’s 12 or 14 home games. … Sometimes we’ll have doubleheaders, so the two times we play a team will be on the same field.”

And why not? Not many Little League fields feature sunken dugouts, lights and electronic scoreboards, a sound system and batting cages.

“Until you visit the facility – and see the reaction of kids who get to go into dugouts and have a scoreboard – you realize this is something special,” Braaten said. “As I’ve traveled to tournaments all around, we learned there wasn’t a field like this anywhere.”

One of the biggest battles Mann has waged in developing the facility is the temptation to cut a corner – knowing he might be the only person who ever realizes a corner has been cut.

“I fight that all the time,” he admitted. “I ask myself, ‘Can we afford this?’ and ‘Is there another way to make this work?’ But I just work harder and don’t cut corners. I wish things were cheaper, but they just aren’t. We have built an incredible foundation there with the idea to keep expanding. But that costs money.”

And that has forced Mann to be creative.

“I recently purchased legs for a scoreboard I don’t have,” he said with a laugh. “In my mind, my third field needs a scoreboard and a flag pole. That might not happen for two years, or five years from now. … The wheels are always spinning.”

But those special touches are what has made Mann Field a place of pride in Isanti County for both young and old alike.

“That hit home for me a number of years ago when we had all the copper stolen out of our south field,” Mann said. “It was a $4,000 loss, and one of the young players walked up to me crying. He said, ‘Doesn’t [the thief] realize you’re doing this for us kids?’ If a 10-year-old understands that, you realize you’re having an impact.

“And it wasn’t just one kid: The entire team wanted to spend the night to protect the field, because the sheriff said the thief didn’t steal all of the copper. It reassures me that they took pride in the field.”

When fans first walk into the Mann Field complex, it can feel as if they have been transported to the movie “Field of Dreams.”

The three diamonds are surrounded by trees and woods and, well, fields. So while many may have doubted the wisdom of building a ballpark in the middle of the country, Mann’s confidence never wavered.

“I had no doubts,” he said. “When I thought about what we had – and what we didn’t have – in the community, I knew it would be a success.”

But continuing that success means work, and that is why there is plenty of activity at Mann Field during the offseason.

“We start by recutting the baselines, cutting the sod back,” Mann explained. “This year we put in an outfield fence on our third field, adding the appropriate gates. And we installed more than 1,700 feet of top cap on the fencing, which is a big project.”

Top cap is the protective tubing on the top of fences to keep players from snagging on the metal of the fence.

“The first project we want to finish [this winter] is the concession stand,” Mann said. “We want to tile the floor and add stainless steel sinks and everything we need to make it compliant with the health department. … We want to have it ready in April.”

After the concession stand project, Mann said he also wants to install a second set of stadium lights on the middle field.

“The footings alone for that are a massive project,” he said, noting that it is not a project that can be done in-season. “I want the fields to match, to have the same lattice-steel towers, so I want to remove the wooden poles and possibly use them on the new field to the north.”

Braaten said the credit for the facility goes to the man whose name it proudly bears.

“Russ has kept this vision going,” Braaten said. “And he does it for the kids – outside of the signs that say ‘Mann Field,’ I would guess many people don’t know who Russ and Ann Mann are. They just want to provide the youth of our community with something special, and the hours, the blood, sweat and tears they put into this vision are countless.”

Mann said his vision for the future is not small.

“I would like to build a ‘big’ field – an adult and high school field,” he said. “I want to build something dynamic. I want grandstands, the whole nine yards – something where you could play a minor-league baseball game there.”

“I dream all the time about adding amenities – adding things and updating things. When you’re the best field in Minnesota, you want to keep adding to it to continue to be the best.”

And why does Mann do it?

“When the parents and the boys thank you for the ballpark, that’s rewarding,” he said. “I have people who come back from college, and they tell me it had an impact on them. That’s when I realize I have contributed something to these people. …

“When you see the kids react to the field, it’s really something.”