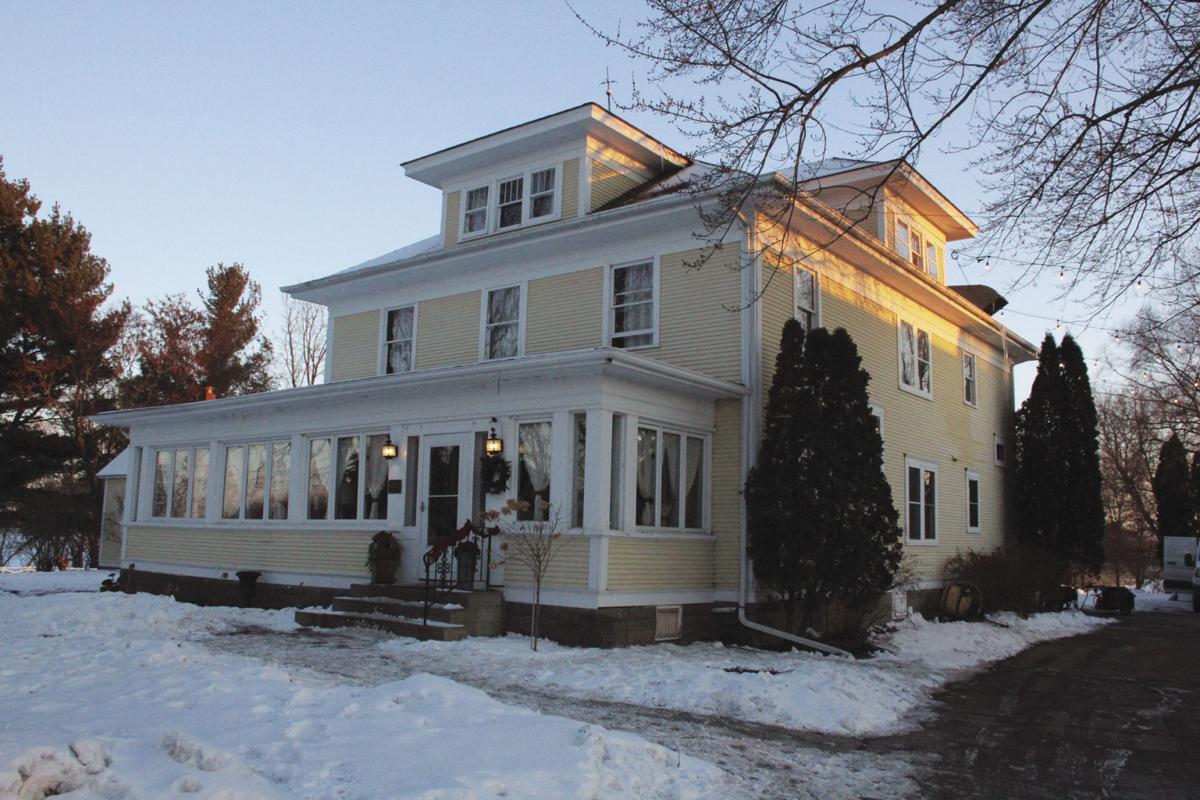 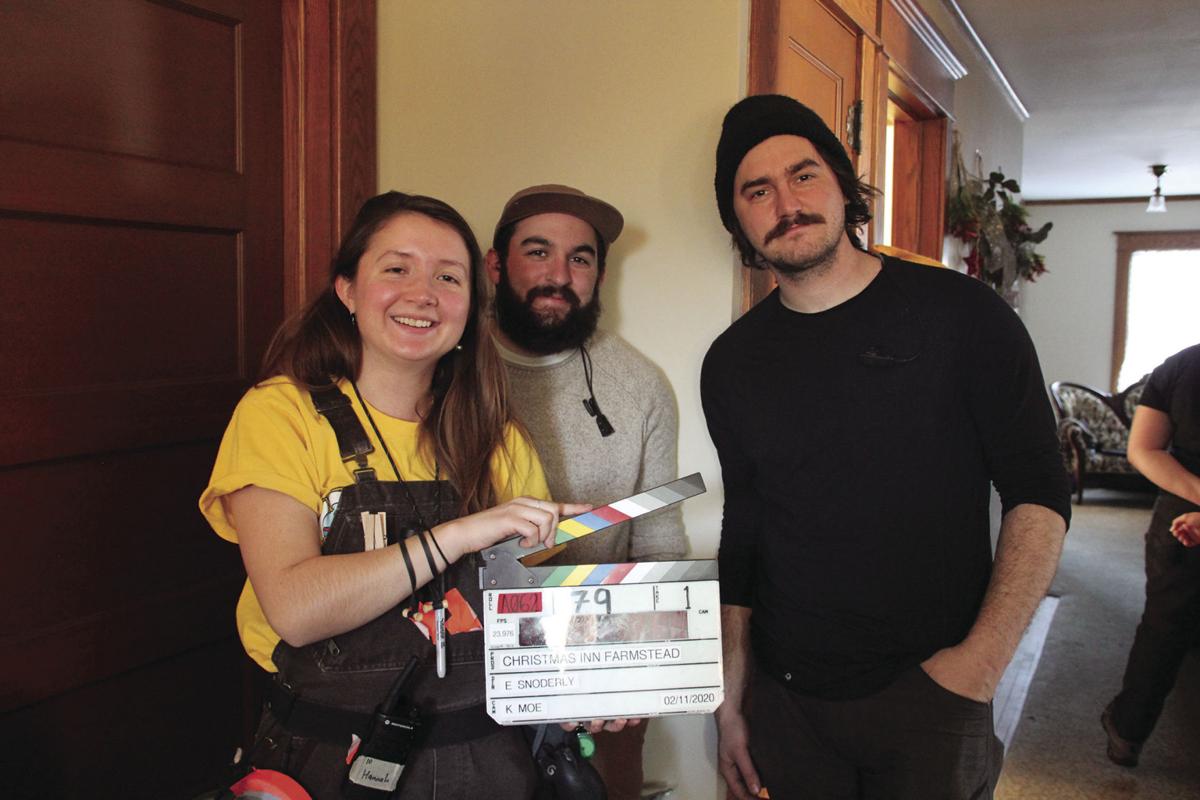 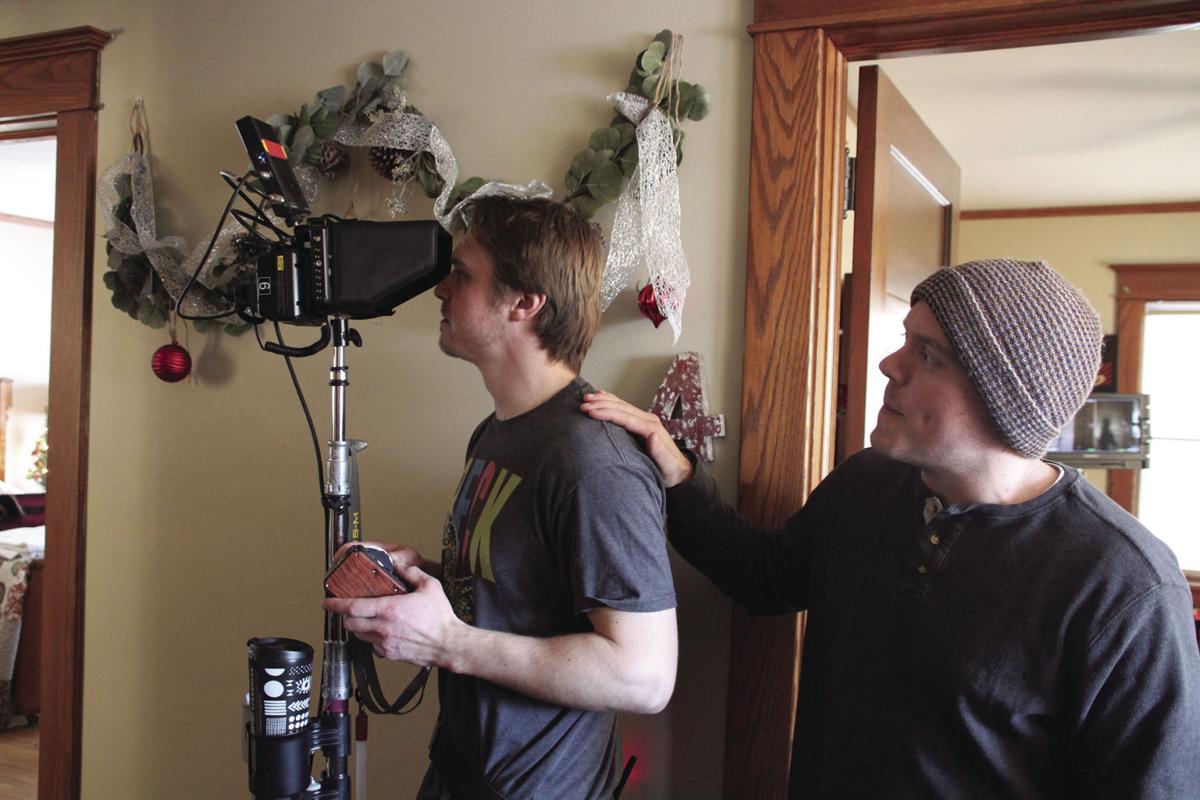 Jay Chase-Jacobus, first assistant camera (left), and Kyle Krause, digital imaging technician, watch as a scene takes place in another room of the Erickson Farmstead during their last day of filming at the farmstead. 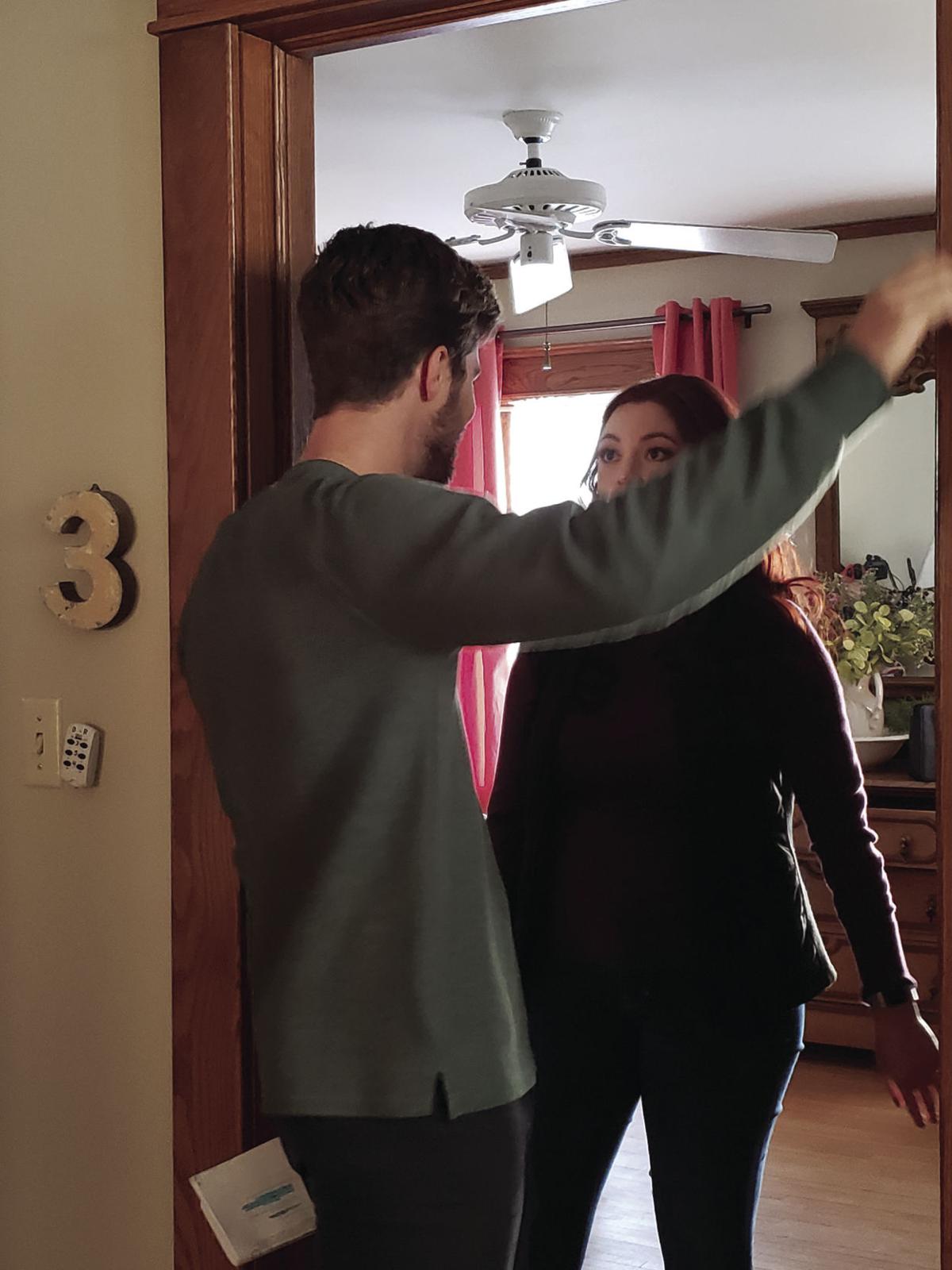 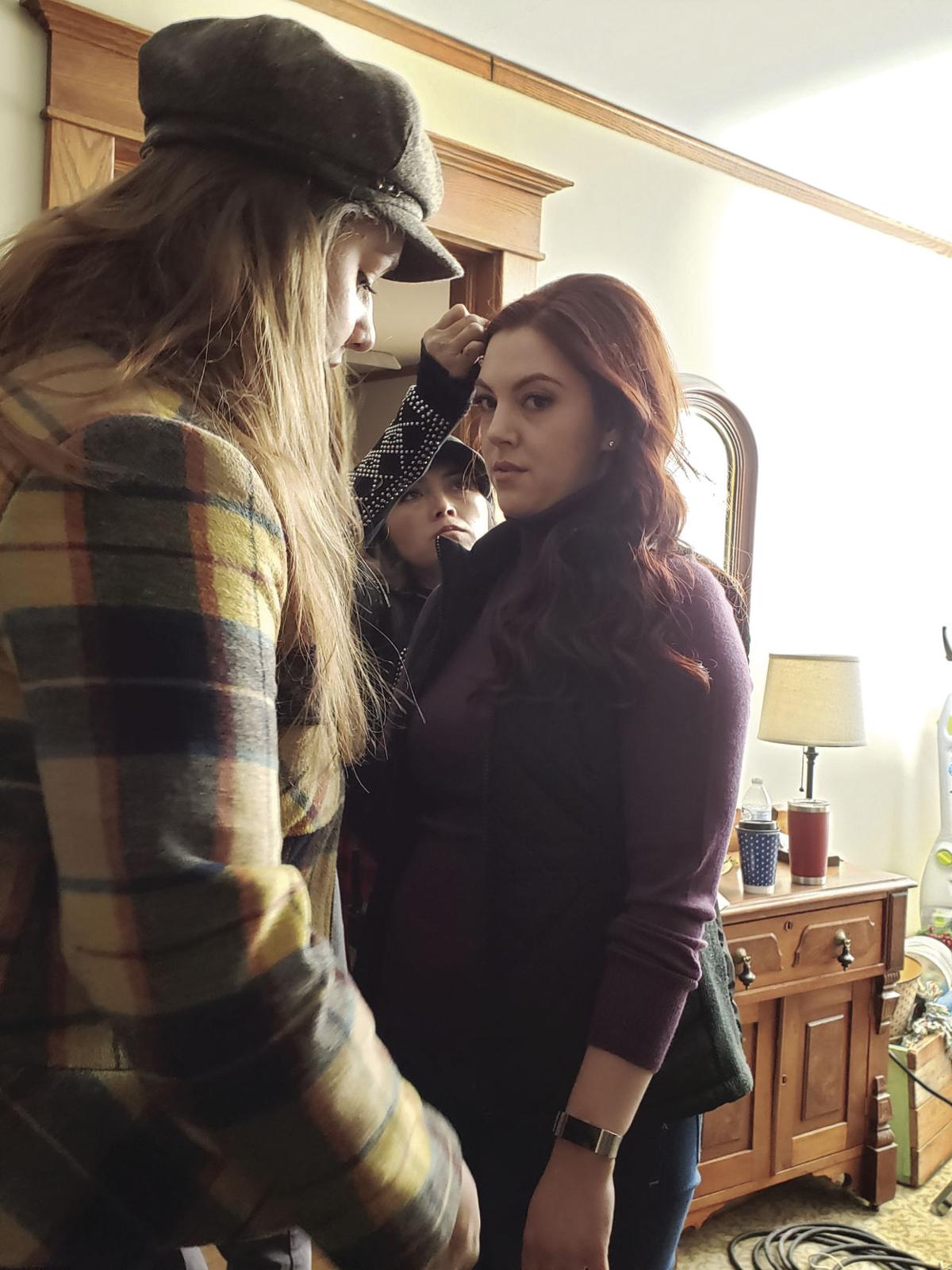 Julia Rogers, played by Lexi Glovagnoli, gets a refresh on her makeup as the cast takes a break from filming. 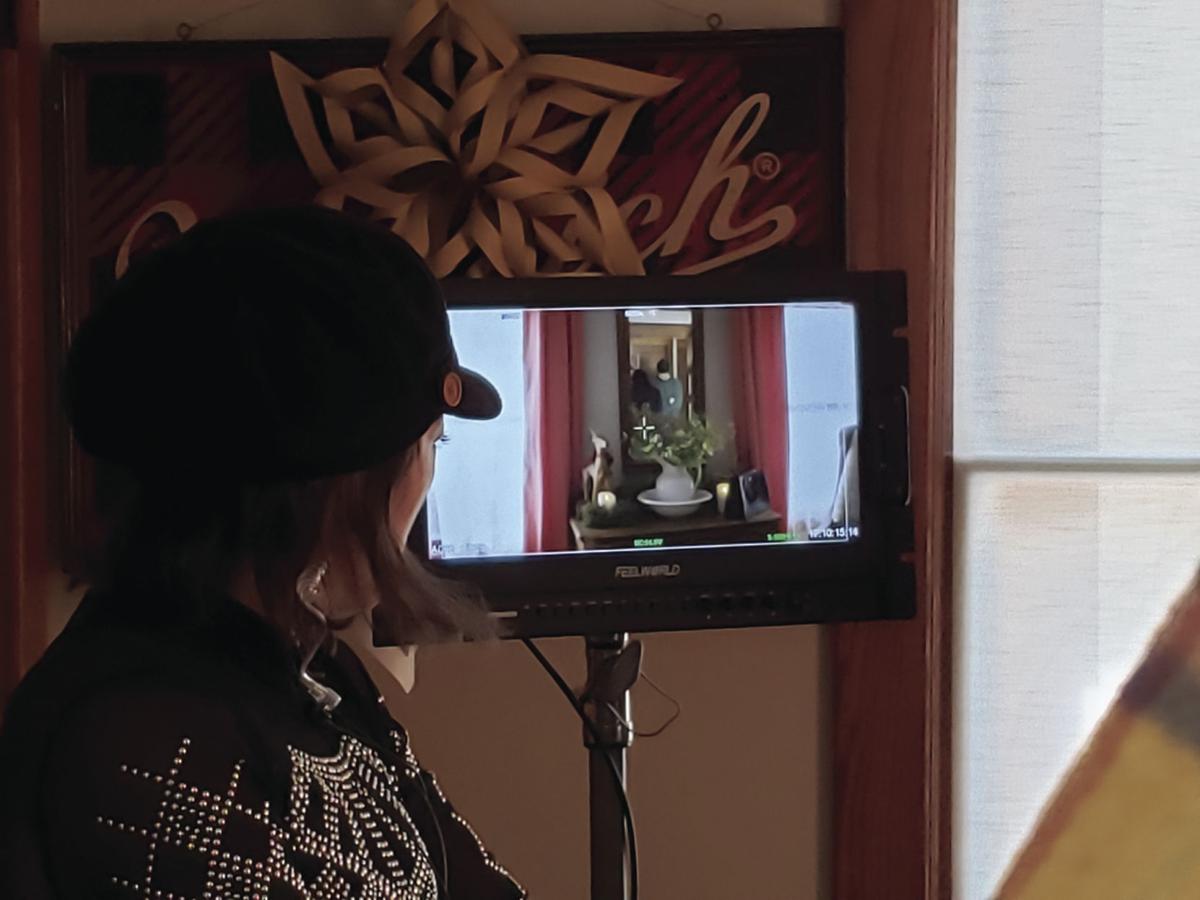 Production members watch the scenes unfold through a screen in an adjoining room. 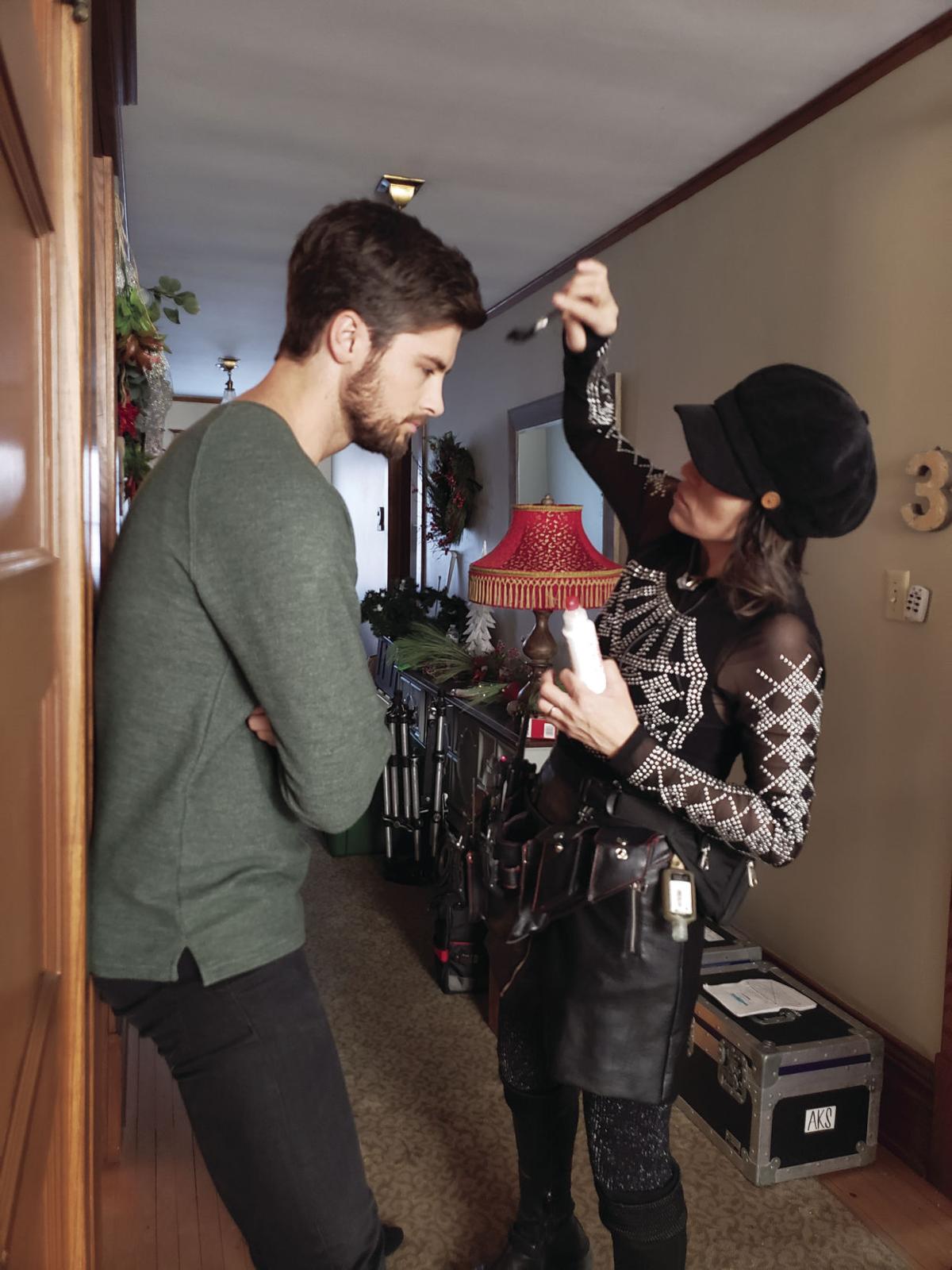 Chad Everett, played by Travis Burns, gets some attention from the production team’s makeup artist during a break from filming.

Jay Chase-Jacobus, first assistant camera (left), and Kyle Krause, digital imaging technician, watch as a scene takes place in another room of the Erickson Farmstead during their last day of filming at the farmstead.

Julia Rogers, played by Lexi Glovagnoli, gets a refresh on her makeup as the cast takes a break from filming.

Production members watch the scenes unfold through a screen in an adjoining room.

Chad Everett, played by Travis Burns, gets some attention from the production team’s makeup artist during a break from filming.

Owners Dennis and Julie Davis always knew the farmstead was special but didn’t know just how special until they got the call from production company Love Christmas Films LLC about using the site for the filming of an upcoming Hallmark-style movie.

“When you see the farmstead all lit up at night, it just looks like a Hallmark card, it looks like a Norman Rockwell painting, but never in a million years did we think it would be the setting for a movie,” Dennis Davis said.

According to Davis, producers already had a filming location lined up for the film, but after a crew member experienced an event at the farm, he knew the location was perfect for filming.

“The cinematographer had been to a family holiday get-together out at the farmstead, a Christmas party planned by his aunt, and when he got brought onto the project, despite already having a filming location in mind, he knew the farmstead was perfect,” Davis said. “I was told he said, ‘I’ve literally been at the place that this movie is written about, and you have to check it out.’”

The producer and the team checked out the website and did some research before determining the farmstead was, in fact, perfect for the film.

“The producer called, and I thought I was being pranked by a friend or something, but she had so many details and the story was just too good for someone who was just joking. I, of course, also looked her up and found that she’s done several dozen movies,” Davis said.

“She continued on and asked if it was possible to rent the farm for about a month, really last minute, and I was thinking OK, maybe in a few months. No, she wanted to rent in just a few weeks. She told me she had the team all together and they were getting ready to shoot.”

Upon arrival at the farmstead, the crew agreed the location was perfect for filming, according to Davis; with the number of buildings on the property and the versatility of the space, it was perfect for a variety of scenes to be shot on site.

“I think the script is what really contributed to them coming here; there’s just so many things that match up, and filming in all of the different spaces throughout the farm was also perfect for them,” Davis said.

The film, set at an inn in a small town, follows the story of two real estate agents fighting over the sale of the inn after owners decide to retire and move out of state.

“The story is that an old inn comes up for sale in a small town because the owners are retiring and they want to move to Arizona to live with their daughter who’s expecting her first child. They decide that instead of just hiring any old Realtor they want to have a competition,” Davis said.

In the film the Realtors were invited to spend a week at the inn to learn its magic, and at the conclusion of the week the owners would choose the Realtor they’d give the sale to.

“A lot of the Realtors gave up right away and left, but there’s these two that are the main characters, a young man and a young woman that are really competitive, that agree to stay. Over the period of the week they do holiday activities like cutting down a tree and baking cookies and they have a snowman making contest, and like any good romantic movie, they fall in love.”

The cookie making scene was one that stood out to the crew that came out to inspect the farmstead before filming, according to Davis.

“When they sent out the first crew to look around, they were walking around the property talking about scenes, and the cookie making scene, the hospitality room is perfect, it’s got the great big island and it’s big enough for the movie cameras and big enough to walk around,” Davis added.

Then, upstairs the main hallway resembles that of an inn, according to Davis, with the long hallway and the doors as well as the camera angles. The upstairs was again perfect for what the crew had been looking for.

“One of the scenes is of the main female in a bathtub, and with our bathtub in the master bath was just perfect, with the two doors coming in,” Davis said.

The culmination of everything on the property and how well the spaces worked with the film, Davis was excited everything worked out as well as it did for the film.

“For a lot of the films like this, the location is a small, pretty location, and most of the movie is filmed at the one location,” Davis said.

From the perfect setting for the inn to the perfect bathroom layout, the property also offered the grooms den, which was transformed into a lounge and a canteen for the caterer and it was even converted to a little house for an Arizona home.

“The inn is even going to be called the Erickson Farmstead — the owners’ names are changed to Herb and Donna, but it will keep the farmstead’s name, which is awesome,” Davis said.

The cast and crew of around 40 per day spent just over a month at the farmstead filming before heading off to additional local locations throughout Minnesota for filming.

“The entire film is produced in Minnesota, and that’s one of the really cool things, aside from the fact that it was filmed here at the farmstead,” Davis said.

“Christmas Inn Farmstead” is the working title for the film, but according to Davis that’s something that could change over time. The film is co-produced by Love Christmas Films LLC and G It’s Entertainment! and the hope is that the film will air on a channel like Lifetime or Hallmark this coming Christmas.