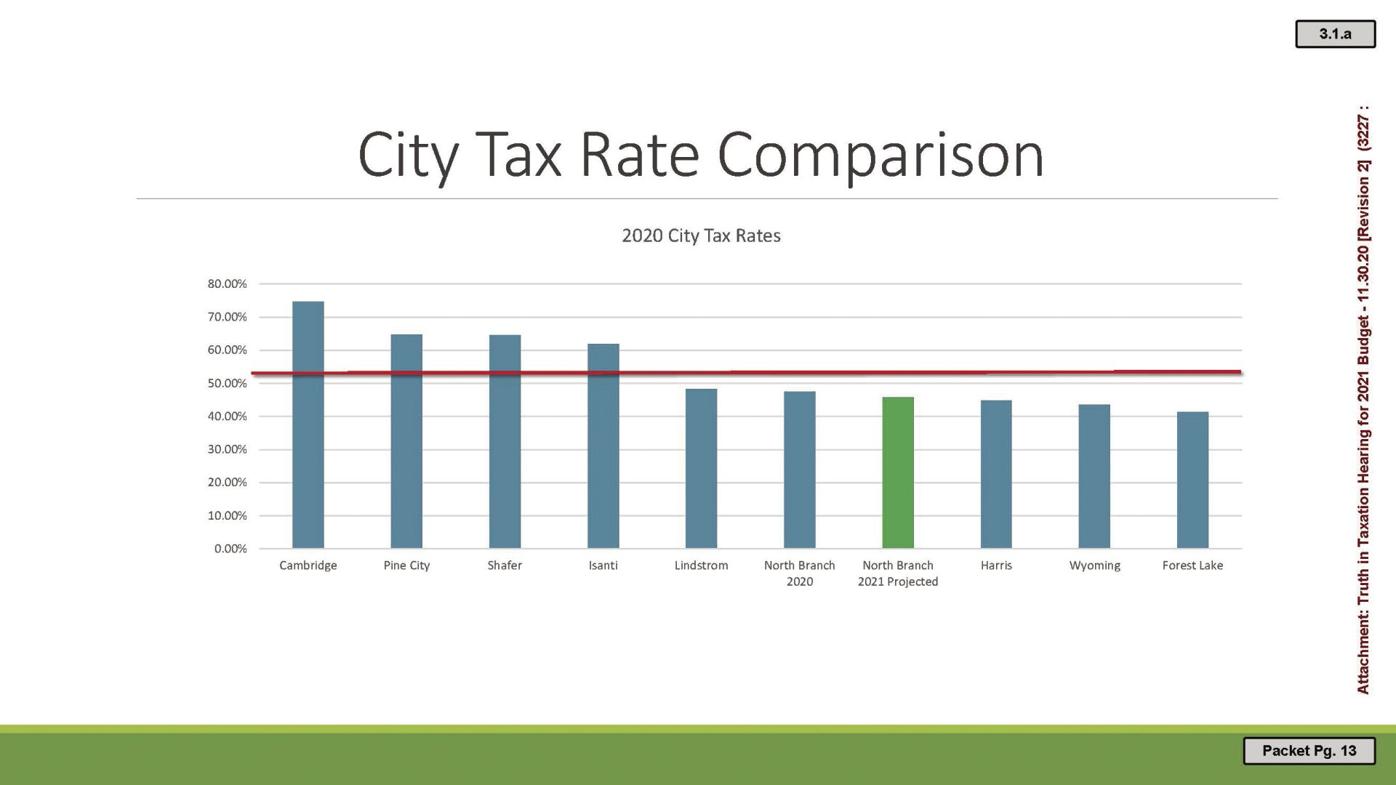 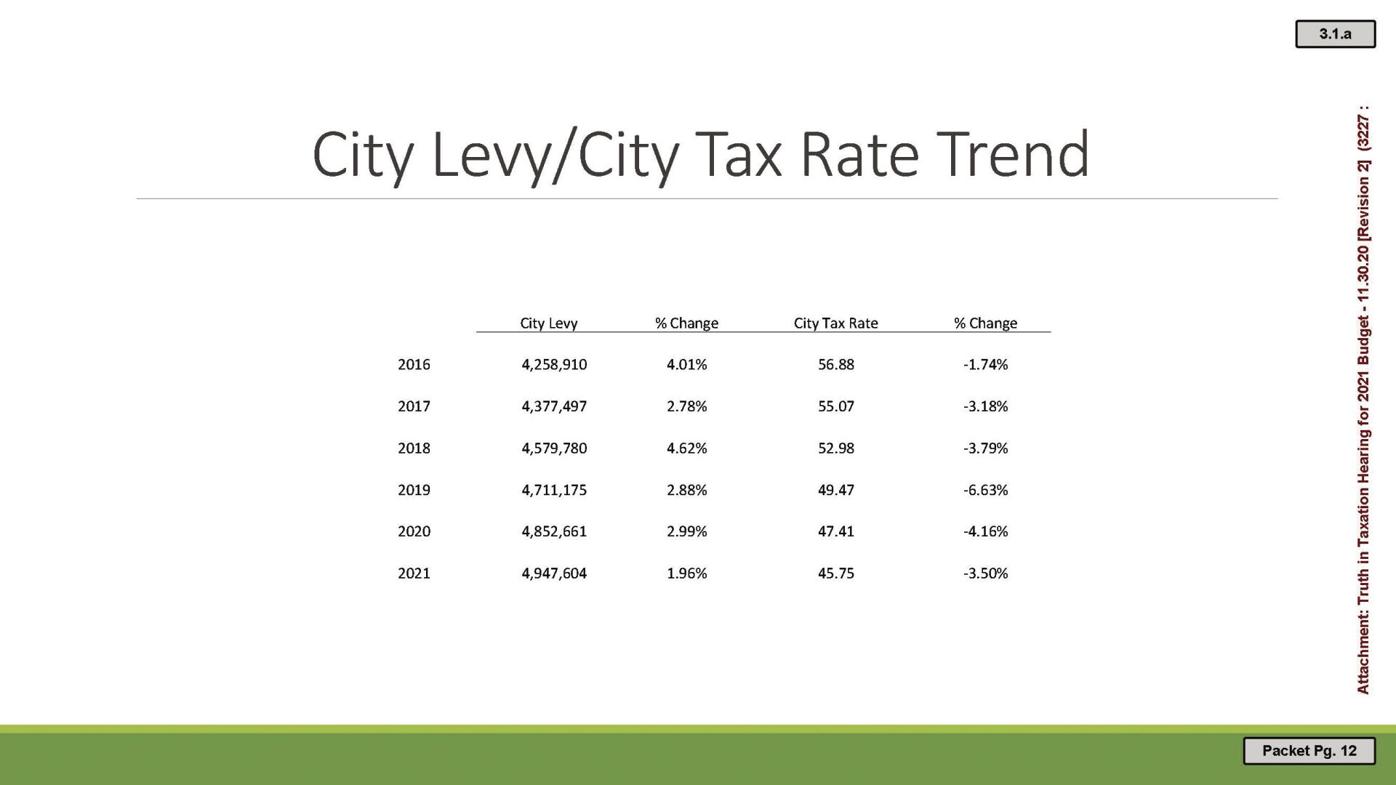 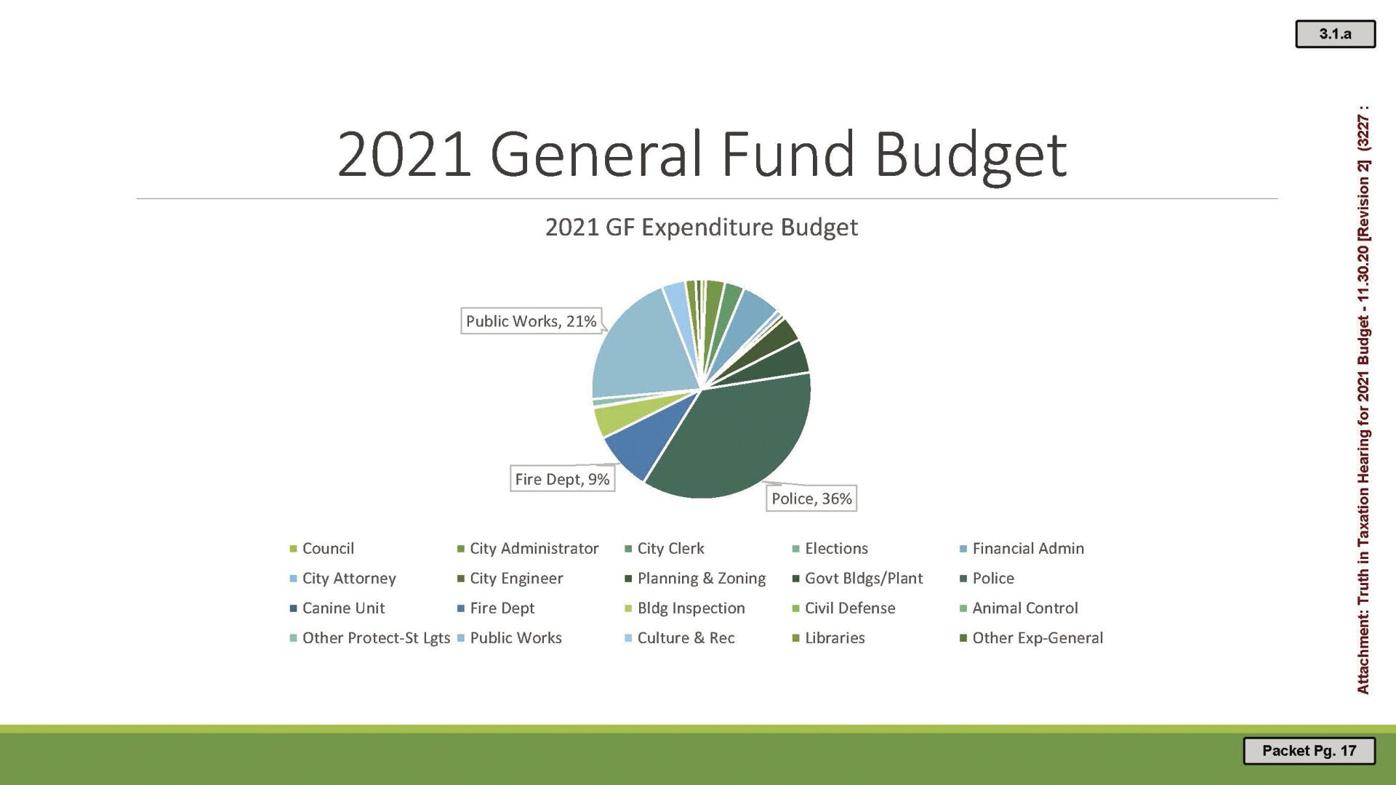 With a city levy increase of less than 2%, the North Branch City Council approved its 2021 city budget and property tax levy during its Dec. 8 meeting.

Factors influencing the 2021 budget include:

• COVID-19 pandemic and resulting impact on the community, residents and businesses.

• Uncertain budget impact to the state, which, in turn, could affect local government aid distribution.

• Increases in expenditures for existing personnel and services due to contractually obligated factors.

“We’re finding out other cities are going 4 and 5% on their levy this year and we’re going at 1.96%. That’s the lowest rate since 2014,” Mayor Jim Swenson said. “We brought this up when we had some people here speaking last week for our tax meeting, and we made it very clear that we’re trying to help with this COVID year, with all this going on, we’re going out and trying to help everybody out, and thank you to this council for keeping this levy as low as we can possibly can. Thank you for the staff. I know you would like to have a lot more that you could do with, but I appreciate everything you guys do too.”

Council Member Patrick Meacham gave much credit to city staff for their extra efforts this year.

“As someone that works in government in another jurisdiction, I know how hard all the supervisors, department heads, grounds staff, that they had to work over the last six months in the middle of a pandemic to try to come up with what a budget would look like in an unknown year with unknown resources, with so many knowns,” Meacham said. “So I think, not only to some of the individuals in the chambers here tonight a big thank you, but thank you to all the staff. It’s been a heck of a year, and the things that staff have had to go through to make this work and to stick with the city and believe in what we’re doing is just awesome. So thank you to them.”

Starks reminded the public that their property tax bill can vary from year to year due to market value changes; budgets and levies of multiple jurisdictions; special assessments; voter approved referendums; changes in aid and revenue from state and federal governments; and state legislative changes.

Starks explained the city has the replacement of two plow trucks in its capital improvement plan for 2022 at $250,000 a piece brand new.

He said there has been a continued need to replace the two plow trucks that have exceeded their useful lives and with the intention to meet the service needs of the city as growth continues and street miles increase.

“Last year, we were able to purchase a used plow truck to meet our needs with the plan to look for another one if we could find one equipped with our same type of plows/wings and sanders so everything is interchangeable with the existing plows. The price we paid was $59,900,” Stark said. “The used truck works well for all our needs and has shortened routes, improving snow removal time for the residents.”

Starks said replacing two plow trucks in one year with brand-new plow trucks does not appear to be feasible for 2022.

“We have had success with purchasing used plow trucks last year and two years before that with budgetary savings,” Starks said. “The problem that arises is that when a used plow truck becomes available, timing is of the essence, and that does not allow us to bring to council for formal approval if we wish to purchase the piece of equipment before other parties do.”

Starks said funding for the purchase of the used plow truck would come from anticipated savings in the public works, parks and storm sewer budgets. He said the practice of using budgetary savings from public works funds has been used in the past and has worked well to meet the city’s needs without increasing debt. He said he anticipates the price would not exceed $90,000, but would bring it back to council if it exceeds that.

Public Works Director Shawn Williams explained some of the oldest plow trucks in the fleet are from 1992 and 1996, and the newest truck is from 2009. He said he would expect to be able to purchase a used truck from 2007 to 2009 in the $90,000 range. He said if a truck is purchased, then one of the two trucks currently listed in the capital improvement plan would be removed.

Following discussion, the council approved a motion for staff to seek authorization to search for a used plow truck, giving the city pre-approval to enter into a purchase order for the acquisition of a used plow truck if one becomes available that meets the service needs of the city and the cost does not exceed $90,000.