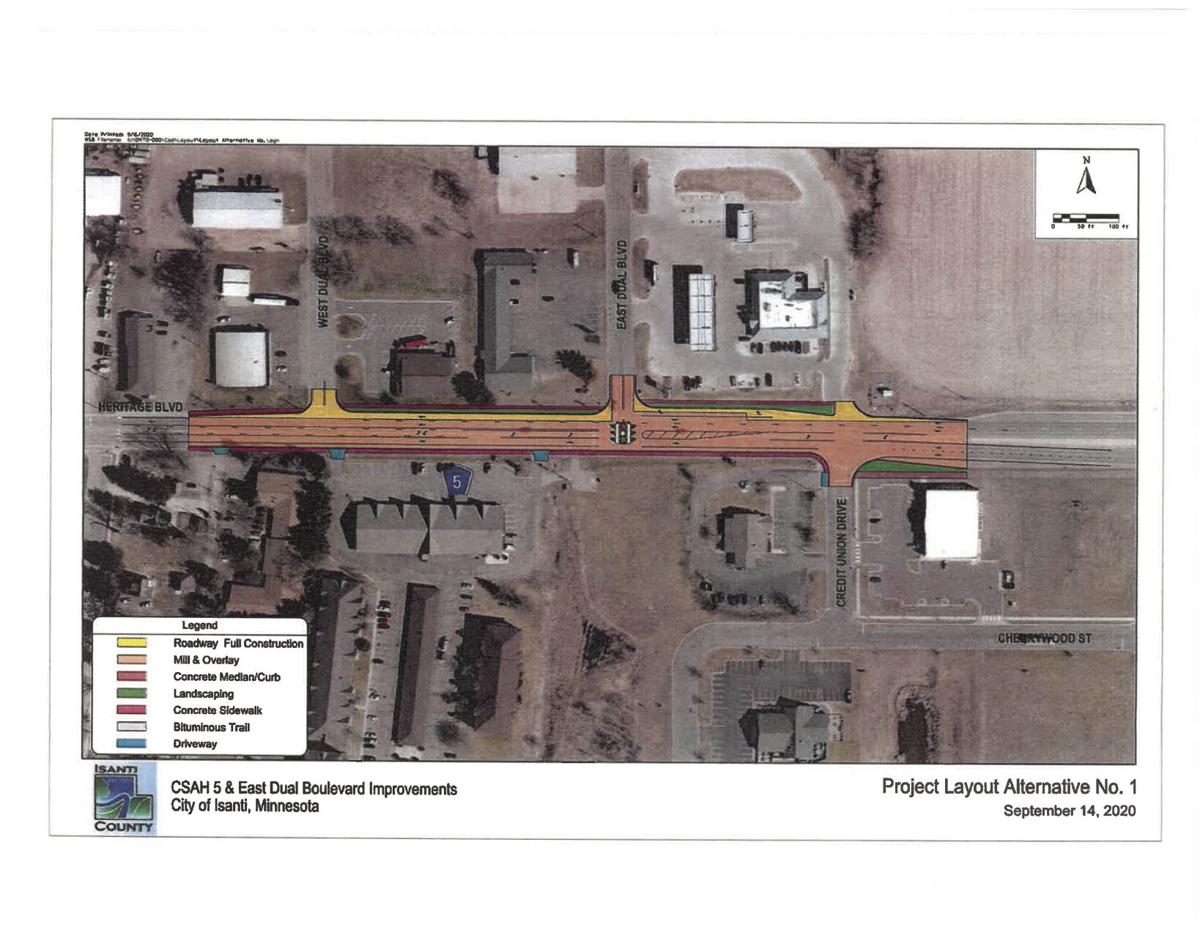 The Isanti City Council discussed two possible options to help alleviate traffic issues off of County Road 5, near the Minnco Credit Union intersection and the Kwik Trip intersection. Mayor Jeff Johnson and Council Member Steve Lundeen preferred the option where a stoplight was put in at the East Dual Boulevard intersection by Kwik Trip. 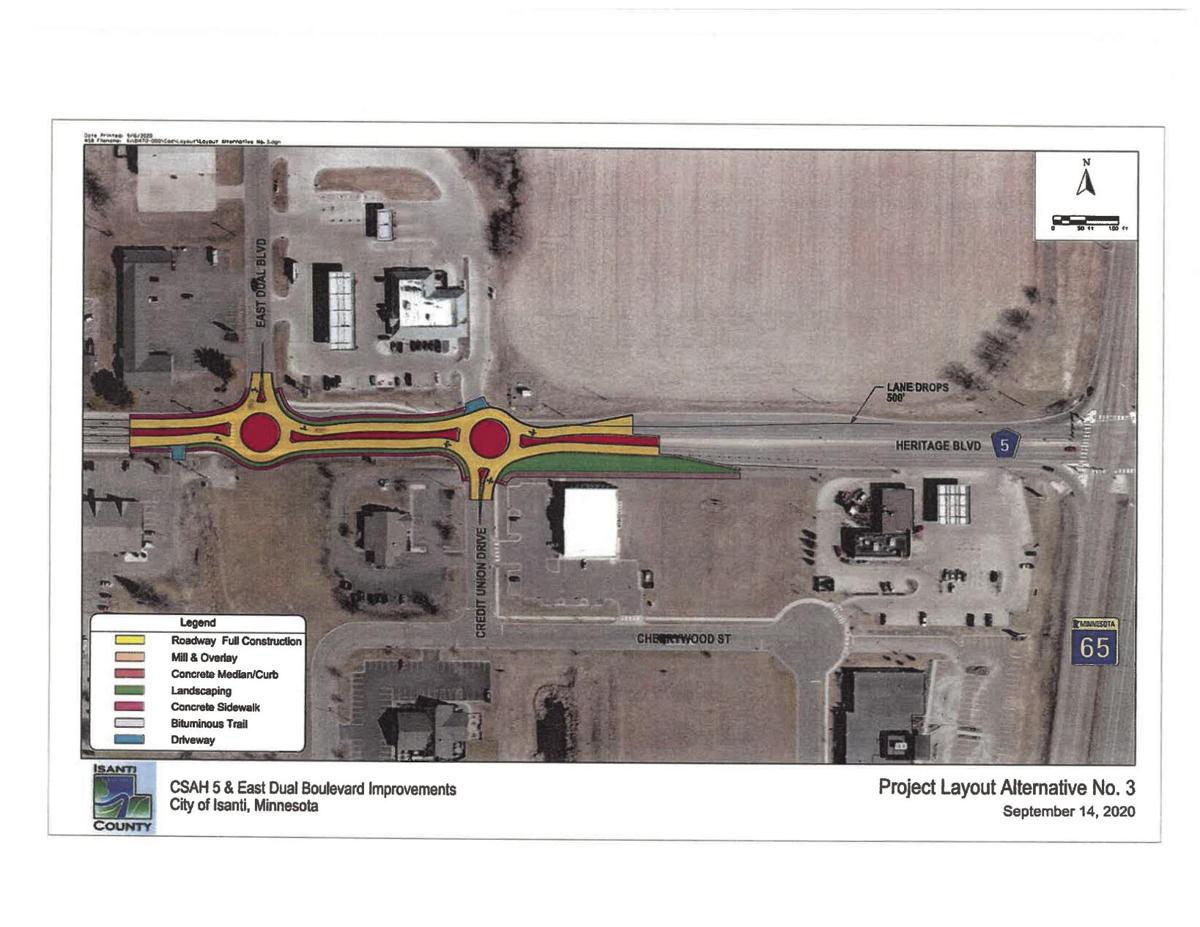 Council Members Dan Collison, Paul Bergley and Jimmy Gordon preferred the option of installing two mini roundabouts; one at the intersection of Credit Union Drive by Minnco Credit Union and one at East Dual Boulevard by Kwik Trip. Isanti County will also have a voice on which option they prefer since County Road 5 is a county state aid highway.

The Isanti City Council discussed two possible options to help alleviate traffic issues off of County Road 5, near the Minnco Credit Union intersection and the Kwik Trip intersection. Mayor Jeff Johnson and Council Member Steve Lundeen preferred the option where a stoplight was put in at the East Dual Boulevard intersection by Kwik Trip.

Council Members Dan Collison, Paul Bergley and Jimmy Gordon preferred the option of installing two mini roundabouts; one at the intersection of Credit Union Drive by Minnco Credit Union and one at East Dual Boulevard by Kwik Trip. Isanti County will also have a voice on which option they prefer since County Road 5 is a county state aid highway.

Isanti County will also have a voice in the project

By a 3-2 consensus, the Isanti City Council is recommending to Isanti County to install two mini roundabouts along County Road 5, one at the intersection of East Dual Boulevard and one at Credit Union Drive.

“In recent years, mobility and safety on the County State Aid Highway 5 corridor between these two intersections has been a concern,” the traffic study stated. “Several crashes have occurred since the Kwik Trip gas station was opened in early 2019, as more traffic travels through these intersections, drivers make riskier decisions when turning in and out of the accesses. Different alternatives will identify safer and operationally better intersections that address the increased volumes through this area.”

Cook explained the study has been completed and four alternatives were given for the council to discuss. However, since two of the alternatives require land acquisition south of the East Dual Boulevard intersection and the landowner isn’t willing to sell, those two alternatives weren’t being considered.

• Installation of a traffic signal at the intersection of County Road 5 and East Dual Boulevard.

• Mill and overlay of County Road 5 between west of West Dual Boulevard and east of Credit Union drive with restriping to include two-way left-turn lane or exclusive left-turn lanes for all accesses.

• Reduction of eastbound County Road 5 to one lane by restriping, and roadway widening on the north side of County Road 5 to maintain the two westbound lanes and right-turn lane for East Dual Boulevard.

• Installation of a mini roundabout at each intersection.

Cook said Isanti County will be having a meeting to discuss the different options as well, with the goal of getting both entities on the same page.

Cook said alternative one is the cheapest of all the options; however, it doesn’t really address concerns at the intersection of County Road 5 and Credit Union Drive.

“I personally like number one here and then that 20 year fix, possibly at that point we might be able to do something with Credit Union and get that a four-way stop. I think that’s going to be the most feasible option,” Lundeen said. “I don’t want to see roundabouts, I don’t.”

Johnson also voiced support for putting in a stoplight.

“We have a lot of semi traffic through there, but now you’re slowing down the response times of public safety. You try to get a fire truck to go around that big thing, they got to slow down,” Johnson said. “So now they’re putting an extra minute and a half to two minutes on their response time, because their trying to get around a roundabout. ... I personally like the stoplight.”

Lundeen agreed with concerns about all the commercial vehicle traffic that goes through the County Road 5 and East Dual Boulevard intersection.

“It it was on Main Street, I could see a roundabout being just fine,” Lundeen said. “I think throwing a roundabout on 5 is like putting one on 65... I personally don’t think a roundabout is the right answer.”

Cook said alternative three, putting in two mini roundabouts, will take care of the issues at both intersections at once.

“So this option, while it does look the most significantly different, it actually does create the highest level of service for vehicle movement, not stacking, and it fixes both intersections just now, where that 20, 30, year plus range is still met, the level of service is still good at Credit Union and at East Dual, so it’s essentially a fix that doesn’t need to get looked again in 20 to 30 years,” Cook said. “We don’t need to re-route that road ever to make this one function at its optimum functionally for its forecasted range.”

Cook said the mini roundabout option does cost approximately $200,000 to $300,000 more than alternative one, but fixes all the issues at once.

Lundeen said he doesn’t see the roundabout option helping with any other traffic issues along County Road 5.

“I don’t see it alleviating any issues like getting out in front of the liquor store, or getting out from the hardware store or coming out of Johnson’s,” Lundeen said. “It’s not going to ease anybody getting on County Road 5.”

Cook said roundabouts do take some getting used too.

“Once you get used to these, these actually function, better than, you know, when it’s brand new, it’s a different movement,” Cook said. “It can be confusing the first times you use it, but in the end, there’s all sorts of research that say, that’s why the study says the level of service goes up, not it gets worse because people are confused.”

Lundeen said ultimately the decision will be made by Isanti County.

“Ultimately, we can say all we want. It’s going to be what the county wants to do too,” Lundeen said.

Johnson also noted with pedestrian traffic, the double roundabouts will not do anything to help pedestrians cross County Road 5 safely, even if crosswalks are built in with the roundabouts.

City Administrator Josi Wood said cost-sharing for the project has not yet been discussed with Isanti County; however, the city did pay one-third of the initial study cost.