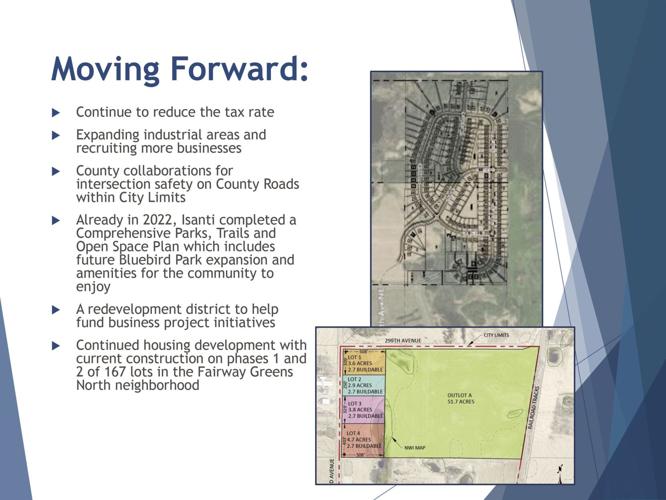 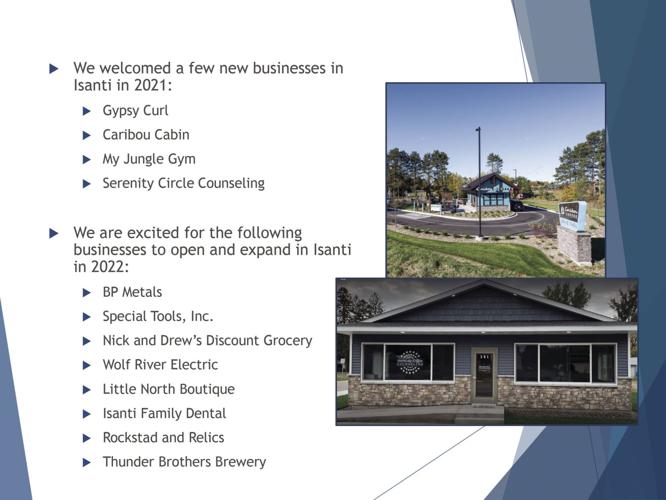 Isanti is looking to construct a new archery range this spring in the area of Bluebird Park and a new splash pad in 2023.

During the Isanti State of the City address held March 16 at the Isanti Community Center, Mayor Jeff Johnson and city staff gave an update on what’s been happening in Isanti this past year and presented a look at 2022.

“Isanti saw continued growth in residential housing,” Johnson said. “We issued 78 new residential permits in 2021 alone. We are excited to see Isanti listed as No. 4 on the Twin Cities Hot Housing list for 2021.”

“This was a great addition for the amenities in the city,” Johnson said.

“Everybody is just expanding, and thank goodness we can accommodate with their growth within the city,” Johnson said.

Johnson said moving forward the city is looking to:

• Continue to reduce the tax rate.

• Continued housing development with current construction on phases one and two of 167 lots in the Fairway Greens North neighborhood, which is north of Sanbrook Golf Course.

Already in 2022, Isanti completed a Comprehensive Parks, Trails and Open Space Plan, which includes future Bluebird Park expansion and amenities for the community to enjoy.

“A lot of houses coming up in Isanti and I’m excited for the growth of our city, but again, I like to slowly do it,” Johnson said. “I want to keep our small-town feel.”

Regarding Bluebird Park, Johnson made an exciting announcement.

“I think the cat’s out of the bag,” Johnson said. “We can mention we plan on putting a splash pad in Bluebird Park. It is on the docket for 2023. We’ve planned and budgeted for it, so we won’t raise our tax rate for it.”

Betker said he has two primary goals he discusses with city council.

“We want to see a steady, decreasing tax rate over time,” Betker said. “The other goal is get levy, debt free, which is to say that we are not going to have debt that is paid for by levy dollars. If we stick to our guns, we’ll have that ready to go by the end of 2030.”

Betker said that can be accomplished by managing components of the municipal budget, considering the associated timelines for each of those components, and focusing on small and steady decreases in the tax rate over time.

“We are going to try to avoid issuing bonds and hopefully by the end of 2030 we’ll have a nice little open house at City Hall and declare ourselves the largest city in the state that is debt free,” Betker said.

The city’s tax rate is what Betker said most businesses ask him about when considering coming to Isanti.

Sylvester said beginning in April, the public works department will begin replacing all water meters. The new meters will be a solid state meter with ultrasonic measurement technology, which in turn will provide better accuracy. The new water meters will have a 20-year service life with no maintenance and will send an alert if the meter has been tampered with.

Sylvester said the meters will have leak detection to allow staff to notify a resident if they have been using a lot of water, such as if a resident has a leaky faucet or a toilet that is running that they may have not been aware of.

Muyres, who has been police chief for nearly three years, explained some of the goals for 2022 include rebranding, officer wellness, proactive programs, officer training and community training.

“We have seven, if you want to call, new officers in the last three years, so you would assume we have a very young department — we’re actually the opposite of that,” Muyres said. “We have an experienced department. The average length of full-time law enforcement service on our department right now is 13.6 years of service. I would say that’s one of the more experienced departments of our size. We’ve been fortunate to have recruited some really qualified candidates from other agencies over the last four years and have some really good talent.”

Olson explained that Isanti is home to 13 parks and trails and five sports recreation centers.

“The city has had a really great, long-standing commitment to enhancing amenities in the community and kind of starting with our parks and trails systems,” Olson said. “We continue to believe that, and to see that in data, that parks and recreation continue to be a determining factor in why people will move to a community. So it is our goal and our mission to continue that on with creating a great community through this system.”

Olson explained 2021 highlights included a celebration for Olympic medalist and Isanti resident Grace McCallum at the August street dance; hundreds of kids having fun at the Splish Splash Summer Bash; commemorating the 20th anniversary of 9/11 with a special flag ceremony hosted by VFW Post 2735; and a successful Isanti Family Farmers Market.

Olson noted the 2022 farmers market will be held from 2-6 p.m. at the new Isanti Municipal Liquor Store (10 Sixth Ave. SE, Isanti) on Wednesdays from June 1 through Sept. 28.

Coming up in 2022, Olson explained a new archery range will be constructed in Bluebird Park; summer events will continue including street dances, the Splish Splash Summer Bash, and fireworks; various park projects; and a new Illuminate Isanti holiday lighting event will be held.

“Illuminate Isanti is our brand-new event that will be coming up in December and it will be a holiday lights experience, so we’re really excited for that,” Olson said. “Hopefully it will draw in a lot of tourists to the area as well as enhance the businesses that are here and help you guys get some more traction from out-of-town guests and residents.”

Hillesheim explained in 2021 the city issued 88 commercial permits, 78 single-family home permits, with a total of 834 permits issued in 2021.

“It’s been a great year for industrial growth, along with residential,” Hillesheim said.

Community development goals for 2022 include:

• Increase industrial growth opportunities for the city for new and expanding businesses.

• Work toward becoming an age-friendly community.