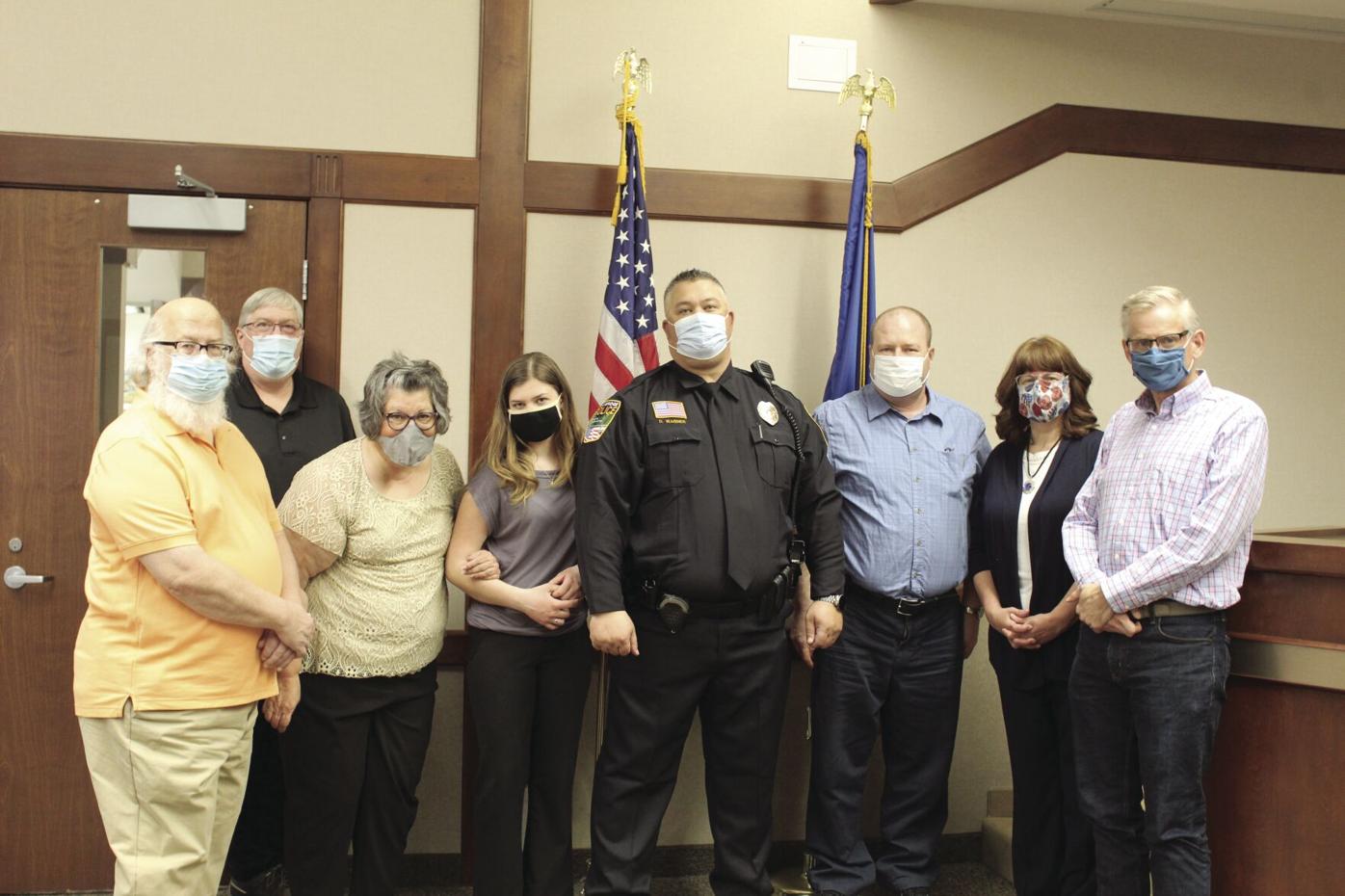 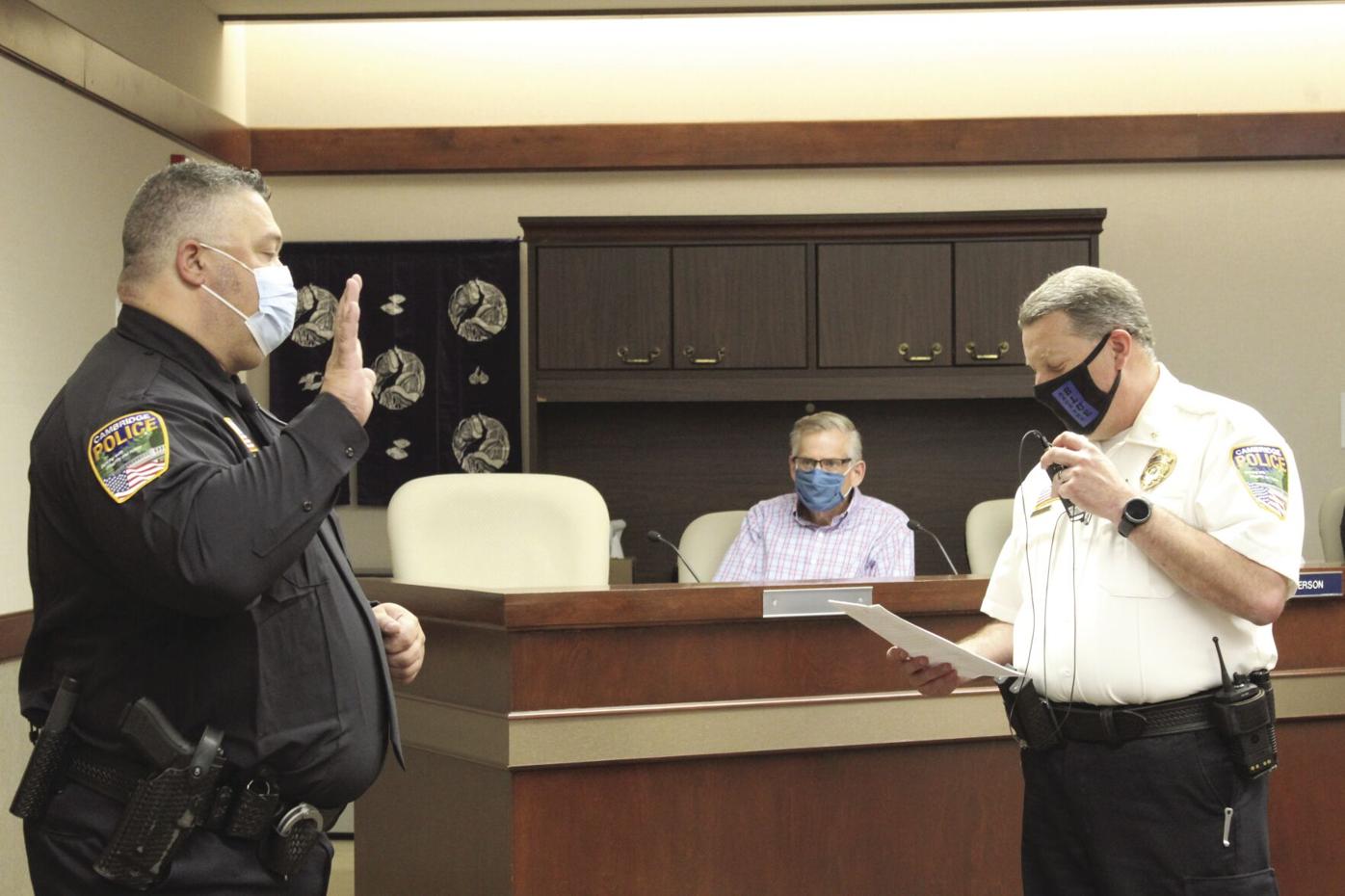 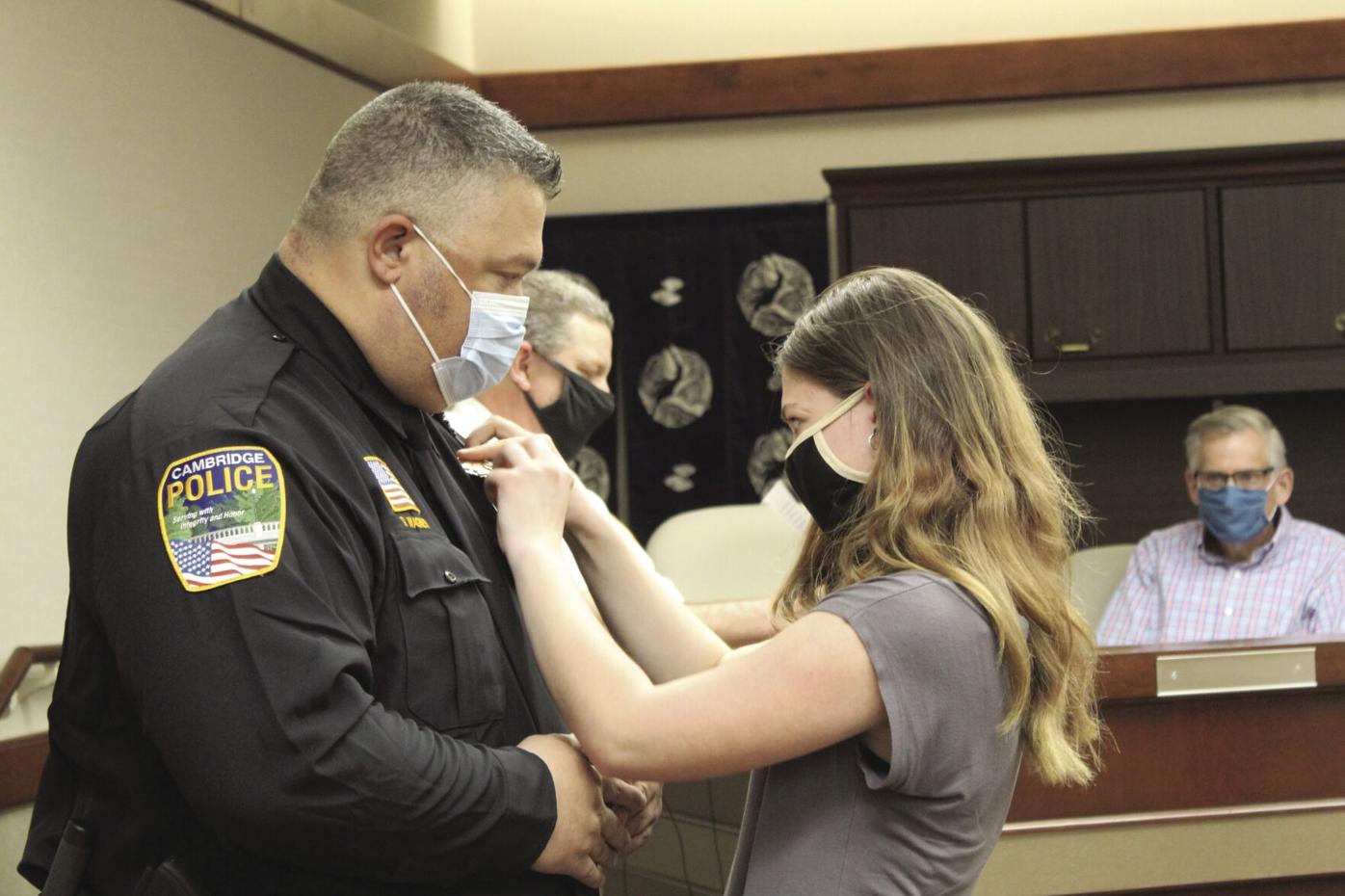 Cambridge Police Officer Daniel Wagner has the official badge pinned on his uniform by his daughter Sophia during the council’s April 5 meeting.

Cambridge Police Officer Daniel Wagner has the official badge pinned on his uniform by his daughter Sophia during the council’s April 5 meeting.

A former correctional officer is the newest member of the Cambridge Police Department.

During the Cambridge City Council meeting April 5, the council held a swearing-in ceremony for the newest member of the Cambridge Police Department, Daniel Wagner.

“But for last nine years he’s been working for the Department of Corrections where he’s learned a lot of valuable personable and valuable life skills,” Schuster said.

When he’s not working, Wagner enjoys being outdoors, being on the lake, weightlifting and spending time with his daughter Sophia.

“He’s ready for this new chapter in his life and is excited to start his career with the Cambridge Police Department,” Schuster said.

With the pandemic ongoing, the city has been approached again with a request to block off space and allow outdoor dining. Vogel said the restaurants that would be interested in utilizing outdoor space are the Leader, Chapala Mexican Restaurant, Cambridge Bar and Grill and Sidelines.

Vogel explained the question was put on the city’s Facebook page to see if the public was supportive of outdoor dining. There were 195 comments, with 100% of them being in support of allowing outdoor dining for downtown restaurants.

Vogel said if the council allows outdoor dining, the city would barricade the same area it did last year, on the north side of Second Avenue Southeast, using cement barriers.

Following discussion, the council approved a motion to permit closure of Second Avenue Southeast between the entrance to the alley and Adams Street South from April 6, 2021, until restaurants are permitted to operate normally by the state of Minnesota or until Sept. 30 at the latest.

The council also approved a motion to permit the use of the former Ace Tack and former Arlington lot for outside dining if needed. Any restaurant using that space would need to extend their liability insurance to cover that location.

Vogel confirmed on April 6 that Athanasia Lewis has been extended a conditional offer from the city to become the city’s new assistant city administrator, and she has accepted that offer. Vogel said the city will conduct its background information, and as long as everything goes the way it should, Lewis will be the city’s next assistant city administrator.

Lewis, who resides in Collierville, Tennessee, has over 10 years of public sector experience working with diverse agencies, dynamics and structures.

Most recently, from June 2018 to November 2019, Lewis worked as the Town Administrator for the town of Atoka, Tennessee, located 25 miles north of Memphis, with a population of 9,600.

Lewis explained Atoka has approximately 100 employees, several parks and a greenway system. While working there, she oversaw daily operations of all municipal departments, ensuring accountability, exceptional service and efficient operations.

While in Atoka, she also prepared and monitored implementation of a $10 million operating and capital budget. She also represented the mayor, the Board of Alderman and the town at various meetings, functions and events. She also was involved with performing human resources duties.