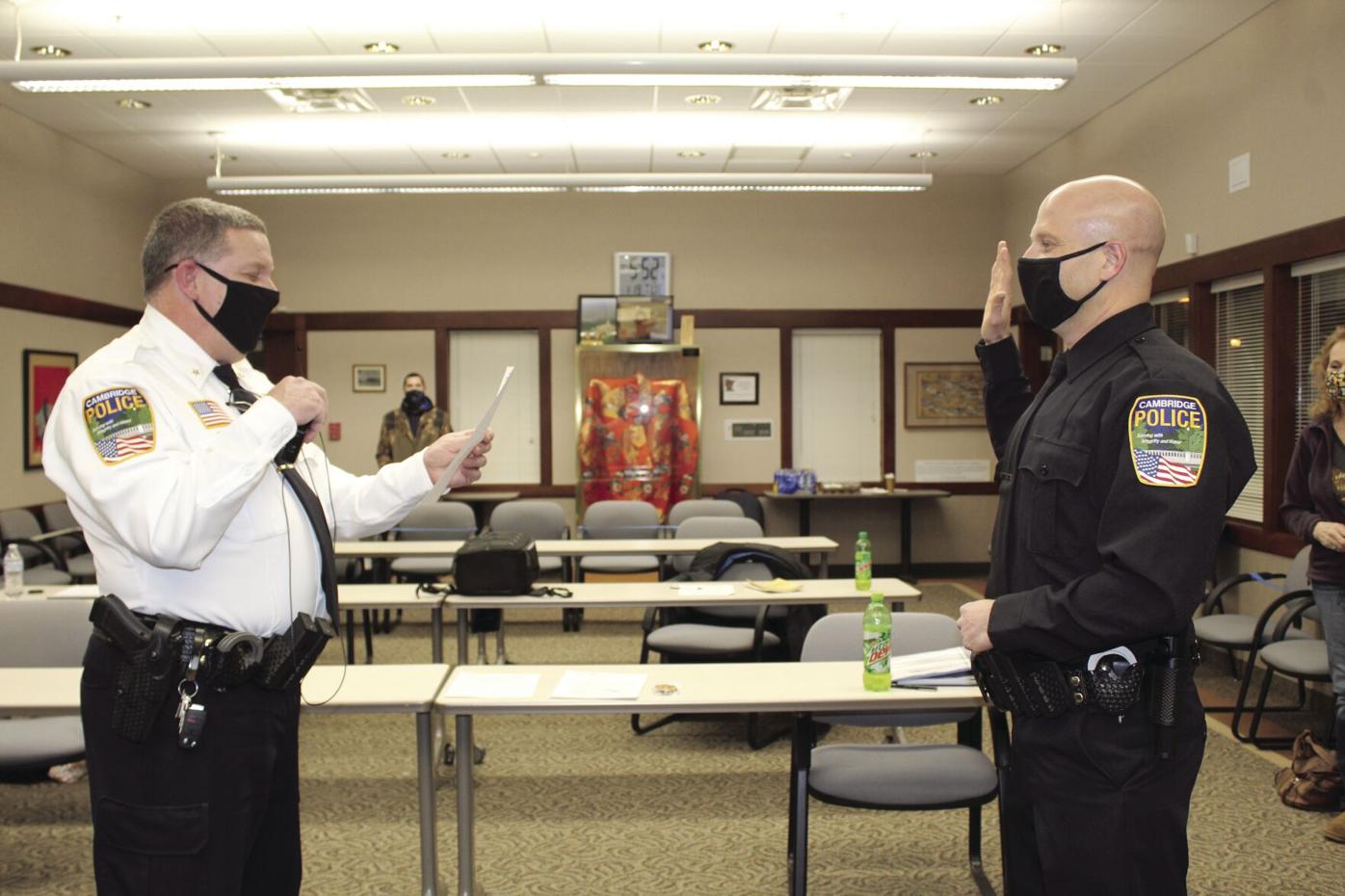 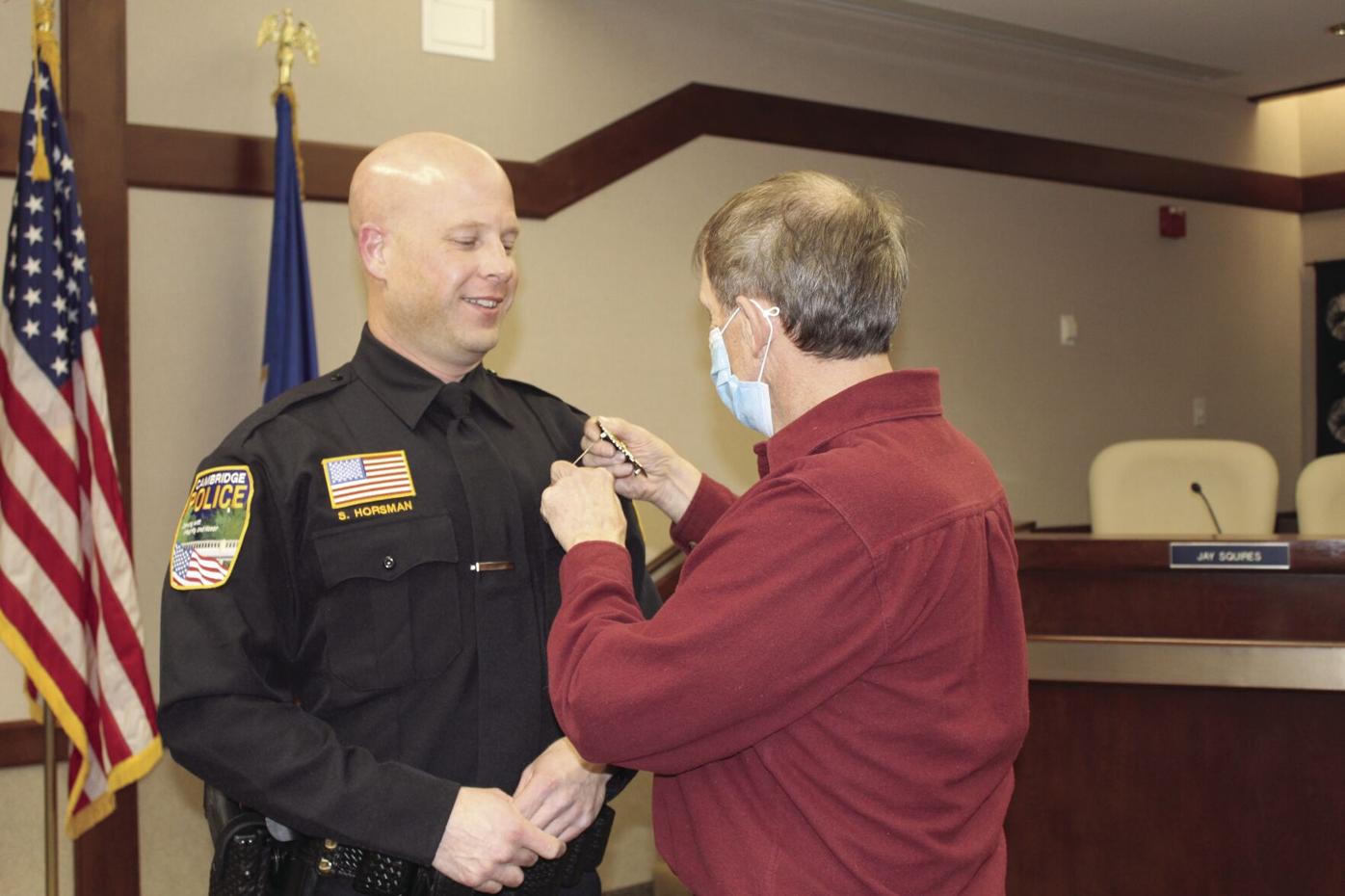 Scott Horsman was officially sworn in as a Cambridge police officer during the Jan. 19 City Council meeting. Pinning the official badge on his uniform is his father, Dan. 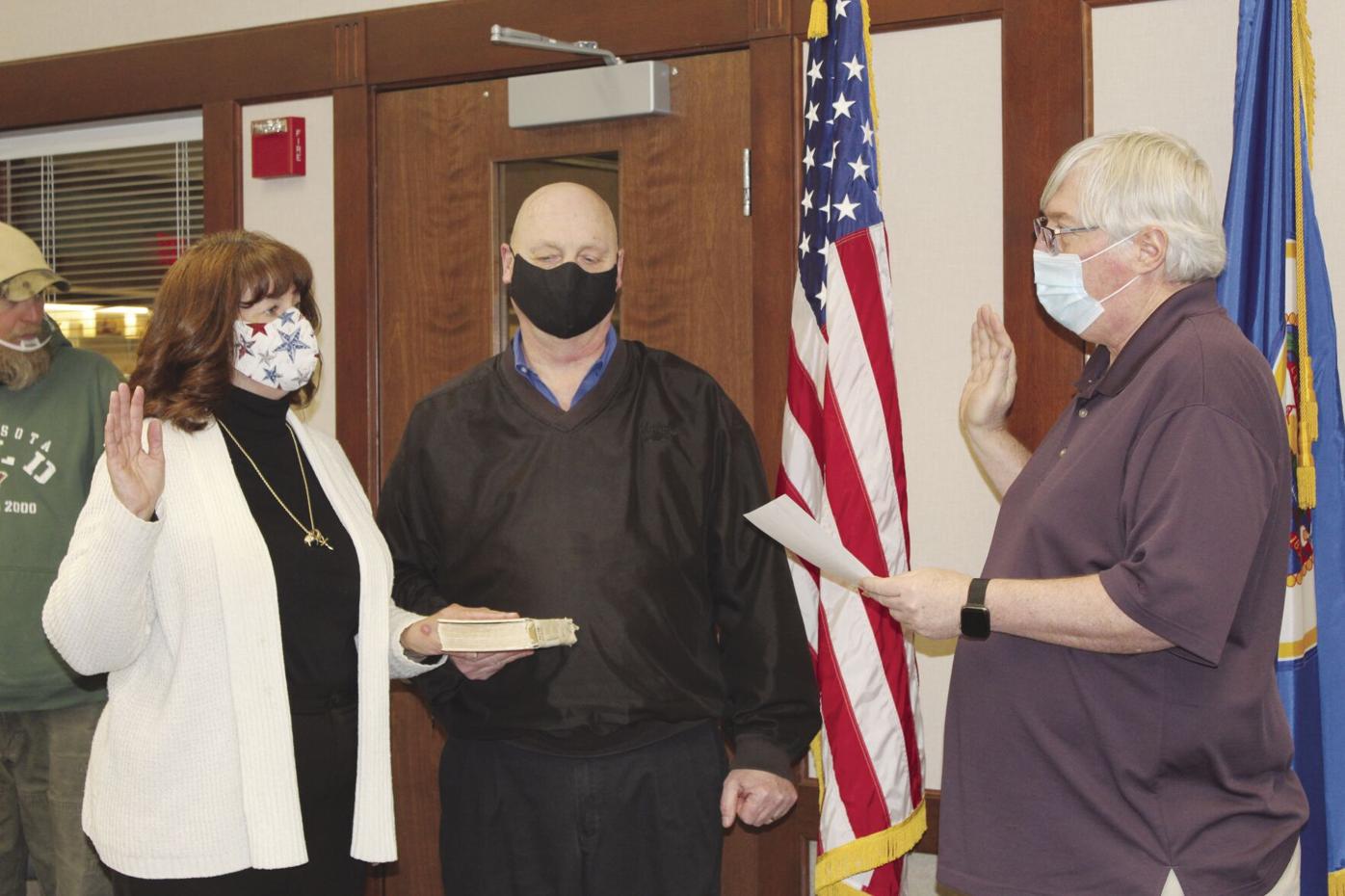 With her husband and family by her side, City Council Member Lisa Iverson is given the oath of office by Mayor Jim Godfrey during the Jan. 19 City Council meeting. Iverson was reelected to the council in the November 2020 election.

Scott Horsman was officially sworn in as a Cambridge police officer during the Jan. 19 City Council meeting. Pinning the official badge on his uniform is his father, Dan.

With her husband and family by her side, City Council Member Lisa Iverson is given the oath of office by Mayor Jim Godfrey during the Jan. 19 City Council meeting. Iverson was reelected to the council in the November 2020 election.

“Scott grew up in the St. Cloud area and is a graduate of St. Cloud State University. He’s also graduated from Metropolitan State University in their law enforcement program,” Schuster said. “Scott has a background in health care and has been a member of the St. Paul Park Police Reserves for five years, serving as a reserve captain for the last two years.”

Schuster explained Horsman currently resides in Cottage Grove but is planning to move to the Cambridge area soon.

“Scott enjoys woodworking, hunting, fishing, and other activities that allow him to spend time outdoors with his family,” Schuster said. “We are excited to welcome him to our department and have full faith that he will do an outstanding job, and I invite everyone to welcome him as our newest full-time police officer.”

Schuster explained the purchase of body-worn cameras has been on the long-range plan for approximately three years, with implementation beginning in 2021.

Schuster said per statute, the Police Department needs to allow time for public comments prior to the purchase or implementation of any equipment. He said the draft policy has been on the website since Jan. 4, asking for any comments, questions, concerns or suggestions be passed along to him via email. A post was also made on the city’s Facebook page notifying the public of the draft body-worn camera policy.

The council also held a public hearing regarding the body-worn camera policy, also required by statute.

“The use of body-worn cameras (BWC’s) in law enforcement is relatively new. Their use by the Cambridge Police Department is intended to enhance the mission of the department by documenting contacts between members of the department and the public, while balancing demands of accountability, transparency and privacy concerns. Digital evidence captured by the portable recording system is not all-inclusive. The system captures a less broad and less detailed image than the totality of the human senses. This policy sets forth guidelines governing the use of BWC’s and administering the date that results. Compliance with these guidelines is mandatory, but it is recognized that officers must also attend to other primary duties and the safety of all concerned, sometimes in circumstances that are tense, uncertain and rapidly evolving.”

Schuster explained he received one email comment from Cambridge resident John Nordin who wrote cameras are useful, and if the department is going to use cameras, to use them constantly. Nordin also wrote the camera footage should be released to the public in a consistent manner, whether the information supports or contradicts the officer’s statement.

Schuster said he received one other email comment from Cambridge resident Meg Lindberg who asked about the cost of storing video footage. Schuster said he responded to her that the city was planning on buying a new server to store the footage, and it would be paid for through the Police Department’s capital budget.

Following discussion, the council approved the adoption of the body-worn camera policy.

Schuster said the next step following the adoption of the policy is to move forward with the purchase and implementation of all of the new hardware and software associated with the body-worn cameras. He received a quote from Watch Guard as well as a quote from White Bear IT Solutions for a stand-alone computer to run the redaction software.

Schuster explained $30,000 was originally earmarked for the project because at the time it was not known that the department would also require a new server to store the video as well as the redaction software and stand-alone computer. Schuster explained the entire project is now going to cost $62,132. He said there is enough funds in police capital projects to fund this project after he decided to forgo purchasing a new squad car in 2021.

Following discussion, the council approved a motion to approve the purchase of body-worn cameras and the additional technological equipment as presented.