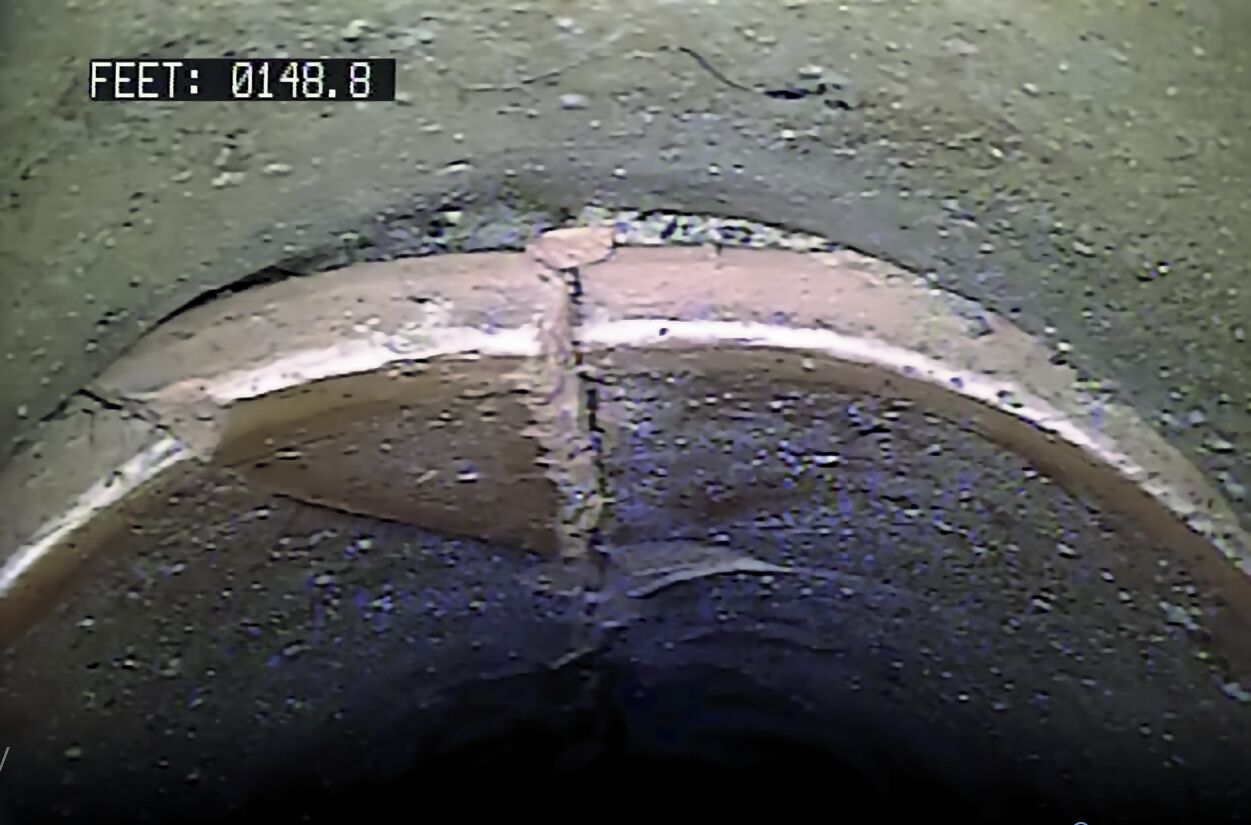 Pictures of cracked pipes below the streets of Braham. Waste/wastewater superintendent Victor Fanth said this part of the pipe is in such a bad condition that it could collapse soon. Photos by Sarv Mithaqiyan 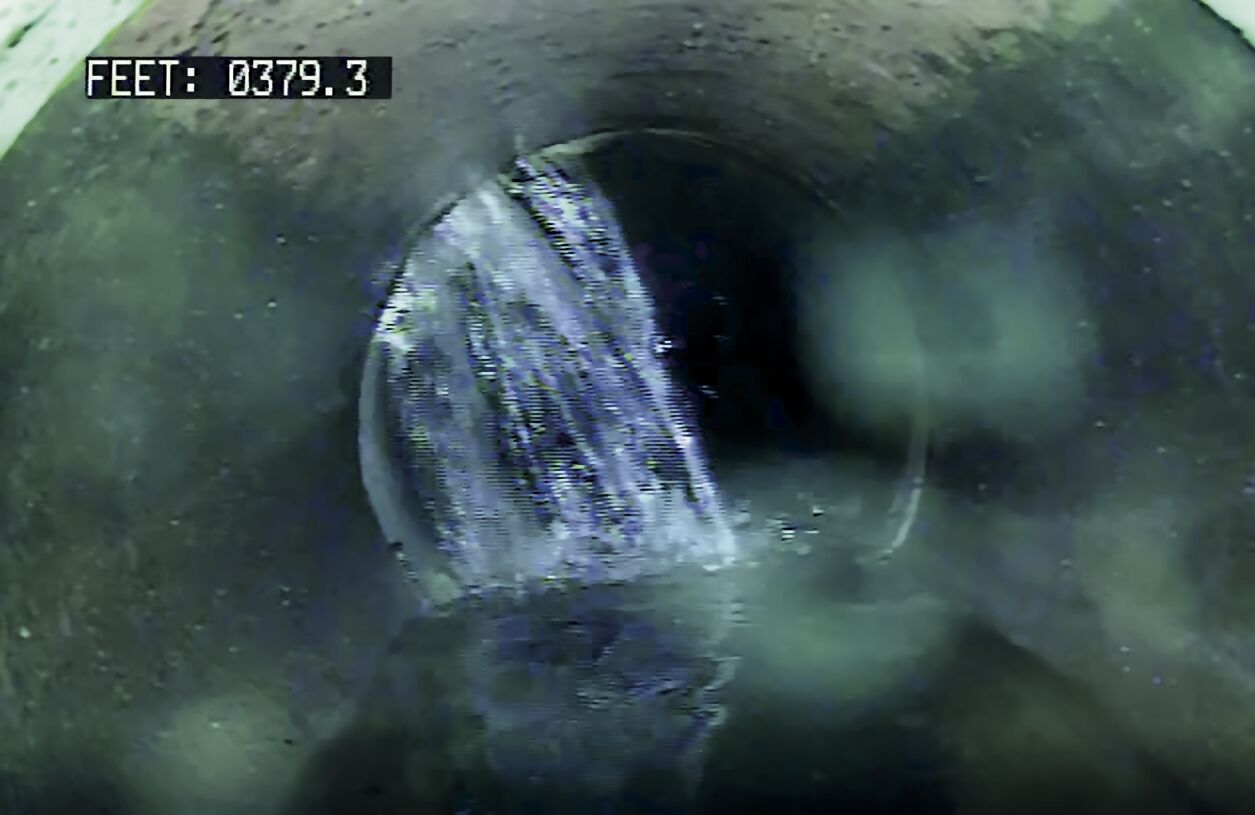 Waste/wastewater superintendent Victor Fanth compared the water gushing inside the cracked wastewater pipe from outside to Niagara Falls. 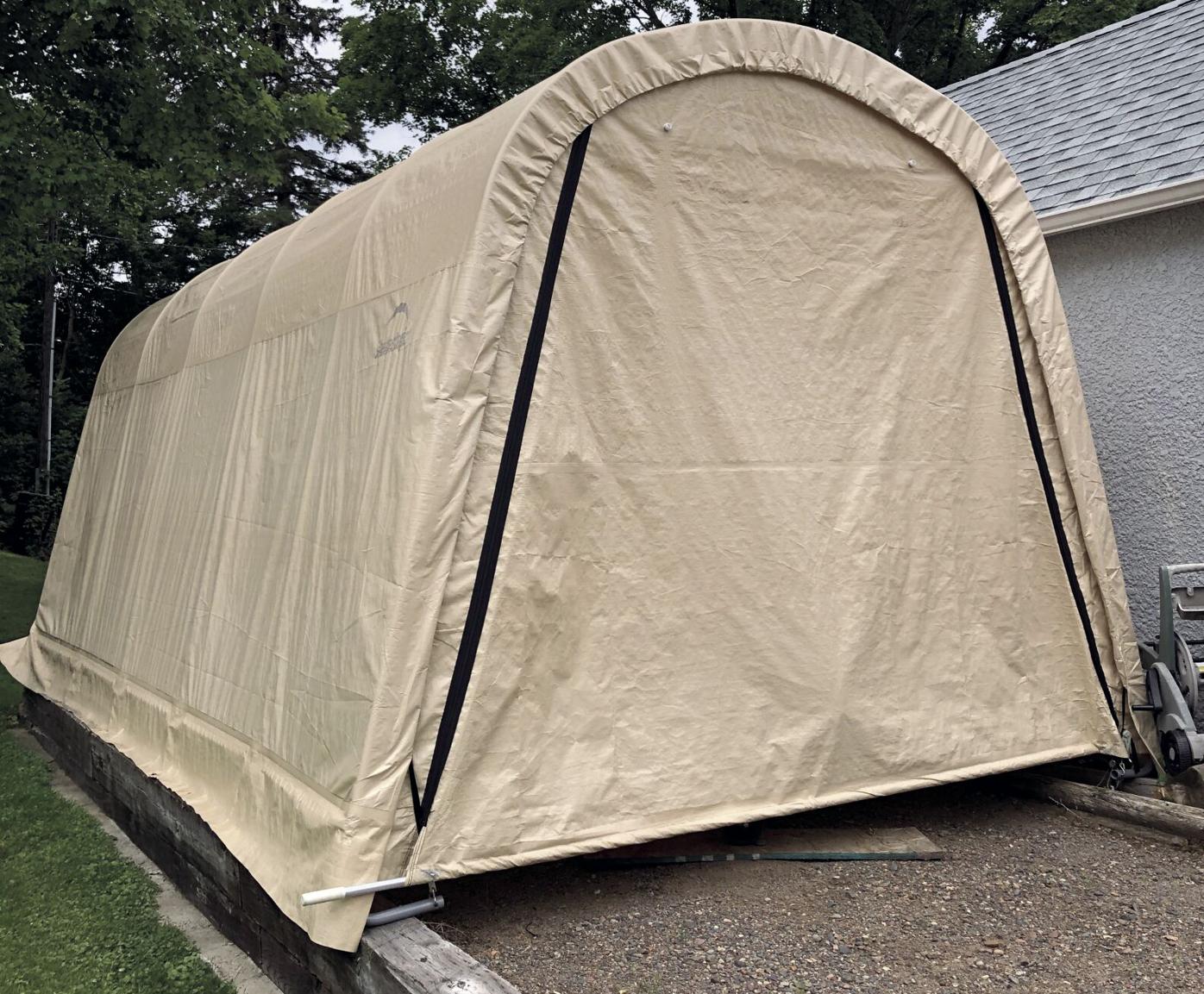 A picture of Jeremy Iverson’s ShelterLogic Garage with frames and light brown tarp covering beside the family’s one-car garage.

Pictures of cracked pipes below the streets of Braham. Waste/wastewater superintendent Victor Fanth said this part of the pipe is in such a bad condition that it could collapse soon. Photos by Sarv Mithaqiyan

Waste/wastewater superintendent Victor Fanth compared the water gushing inside the cracked wastewater pipe from outside to Niagara Falls.

A picture of Jeremy Iverson’s ShelterLogic Garage with frames and light brown tarp covering beside the family’s one-car garage.

Wastewater pipe damage in the city of Braham will be fixed utilizing mostly federal dollars.

Pipe repairs on aged infrastructure was the subject of discussion during the Braham City Council meeting on July 6. One serious area of damage was likened to Niagara Falls, due to roughly 50 gallons a minute of outer-groundwater gushing into the cracked pipe, said Victor Fanth, waste/wastewater superintendent. Pipes 12 feet underneath Elmhurst Avenue North and Second Street Northwest are the priority, said Angie Grafstrom, Braham city administrator.

“Even if it’s dry up on top, it’s still wet in the ground, it’s still pouring in,” Fanth said. “So what we have to do in that entire line is we have to grout it because the (inflow and infiltration) is so bad. We have to have Visu-Sewer come on and grout it. They have to go through, they put a compression fitting around all those joints, they shoot grout into it and get the water to stop.”

After the grouting of the pipes, the city will then have to line the entire pipe, Fanth said.

“There’s a company that’ll come in and they’ll shoot a liner in of the entire pipe,” he said. “They’ll come back and cut open these service lines and everything. And that liner then gets steamed and it’s hardened, and it’s hard as a rock. It’s basically like making a pipe inside of a pipe.”

Fanth said lining the pipes is the most affordable avenue to fix the damage.

The city expects $105,000 in funds from the American Rescue Plan of 2021, which was passed by Congress in March, to fund the project. The city will also receive an additional $105,000 from the Rescue Plan next year.

Grafstrom said the city expects to use most of the $210,000 to fund the water/wastewater repairs. Most of the pipes will not require grouting before the lining, she said. The lining will cost $80,000, she approximated.

“To a certain extent, that’s an open-ended cost, because we don’t know how much of a void there is, how much grout it’s going to take to stop that from leaking,” Fanth said.

The council approved a motion to move forward with Visu-Sewer at a time and material rate of $275 per hour and a $12 per gallon of applied acrylamide grout.

Braham resident Jeremy Iverson received a notice from the city to take down his ShelterLogic Garage that his family has had for about four years, he said.

“We’re excited to be a part of the city, we purposely chose to live in Braham,” he addressed the council. “Throughout the years our children have grown and our needs have expanded. We have spent a lot of time and money upgrading our home inside and out and found that with growing children, our one-car garage does not fit our family needs any longer.

“And as many others had, we decided to invest in one of (the) ShelterLogic Garages as a way to protect our investments,” he continued. “We have not had any complaints until now. Many of our neighbors also have invested in these. A city is an organization that supports its growing families and I believe that this is one more chance for Braham to show that they are a family-first city.”

Iverson said there are 13 houses with the same structure around town, but he was the one who received notice.

The other tarp-like structures the city-dwellers have were grandfathered before a city ordinance came about, Grafstrom said.

“They’re illegal in that according to the city ordinances because they reduce property values and we don’t want to have tarp-like structures,” Grafstrom said.

Mayor Tish Carlson explained that the ordinance prevents people from using tarp-like structures near their properties for storage because people didn’t take good care of them in the past. Tarp-like materials tend to deteriorate with storms, heavy winds, rain and heavy snow, she added.

“That’s probably how it was written,” she said. “Because it was abused. It wasn’t taken care of.”

Changing the ordinance language to allow tarp-like structures under certain conditions can be something the city will look into, Grafstrom said.

“If the ordinance were to be changed, I would say it has to be very strong language that it has to be maintained, or it has to be taken down,” Council Member Vicky Ethen said.

Petitioning to change a city ordinance costs $100, Grafstrom said. The council suggested to Iverson that he rally a team of neighbors or city-dwellers who may support a change in the ordinance about tarp-like structure to divide up the fee. The process also involves several other steps and public hearings, she said.

Grafstrom will speak with the city attorney about changing the ordinance language, she said. Meanwhile, Iverson was allowed to keep his structure until further notice.