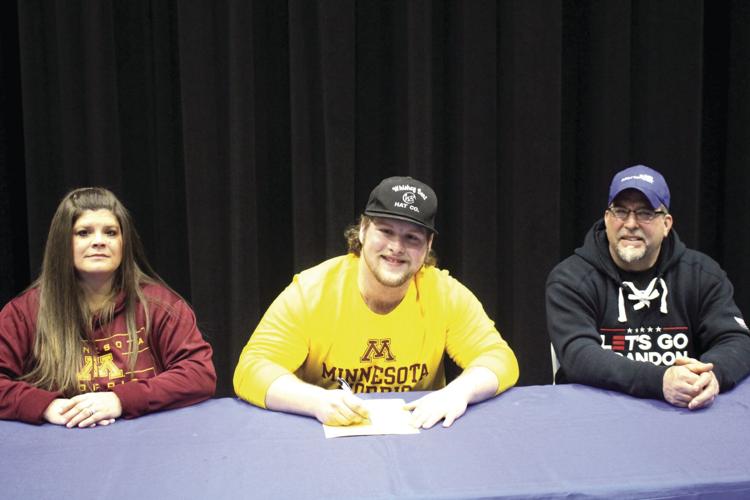 Braham senior Austin Sterling, flanked by his parents, Bob and Jodi Splittstoser, signed his national letter of intent to play football at the University of Minnesota Morris starting this fall. Photo by John Wagner 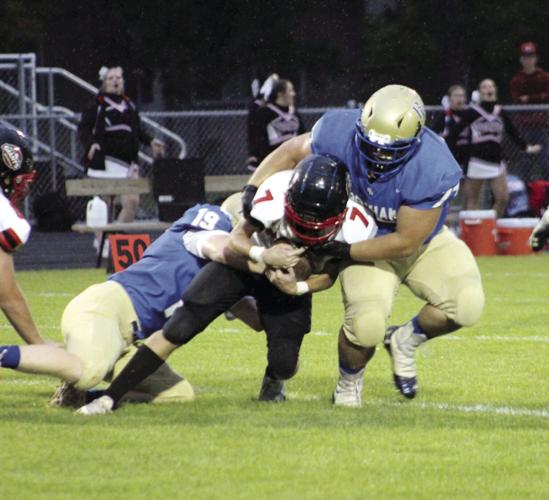 Braham senior Austin Sterling, right, teams will junior Lyle Nelson (No. 19) to tackle an opponent. Sterling was a key performer for the Bombers on both the defensive and offensive line. Photo by John Wagner 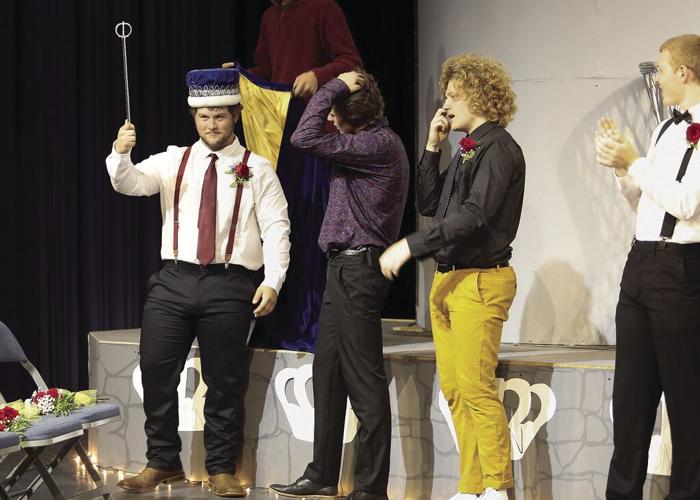 “Farmer Dan” raises his scepter after being named Braham Homecoming King this past fall. Photo by Darwin Nelson

Braham senior Austin Sterling, flanked by his parents, Bob and Jodi Splittstoser, signed his national letter of intent to play football at the University of Minnesota Morris starting this fall. Photo by John Wagner

Braham senior Austin Sterling, right, teams will junior Lyle Nelson (No. 19) to tackle an opponent. Sterling was a key performer for the Bombers on both the defensive and offensive line. Photo by John Wagner

“Farmer Dan” raises his scepter after being named Braham Homecoming King this past fall. Photo by Darwin Nelson

“Farmer Dan” made it official, signing a national letter of intent to play football at the University of Minnesota Morris as part of a ceremony held at Braham High School on Wednesday, April 6.

Who’s Farmer Dan, you ask? At Braham, everyone knows that Farmer Dan is a pseudonym for senior football standout Austin Sterling.

“Most people in school don’t know my real name,” Sterling said. “Really. One year, for homecoming, they announced my name – and no one knew who that was until they said it was Farmer Dan.

“When I went to other schools for wrestling meets, people would call me Farmer Dan – and I had no idea who they were. I have no idea how it spread.”

Sterling said the nickname began thanks to a wardrobe decision he made in middle school.

“When I was in seventh grade, I used to wear overalls and a cutoff T-shirt to school every day,” he explained. “The nickname Jacob Lindgren gave me was ‘Dirty Dan,’ then it changed to ‘Farmer Dan.’

“I’m not sure how everyone found out about that name, to be honest. It just got more popular.”

According to Braham football coach Shawn Kuhnke, the nickname grew in large part because of the oversized personality it was attached to.

“Is there a more unique personality than Farmer Dan?” Kuhnke said. “He has a charismatic personality that is second to none. Everyone is drawn to Austin. When we had the Pep Fest prior to our Homecoming Game, we watched the elementary kids chant, ‘Farmer Dan’ and then gravitate to him. He’s truly, truly special.”

Sterling said he was humbled to have younger children at the school know who he is.

“It’s just fantastic to me to leave a legacy at this school,” he said. “It was insane to have every single kid in the gym chanting my name; it’s just the best feeling in the world. There’s no other feeling like it.”

Funny thing is, the story of Farmer Dan almost never took root at the school.

Austin Sterling started attending Braham’s summer football camp in third grade, and he did his best not to miss a year. But he never joined the school’s football team – at least not right away.

“As a young kid, I hated the sport of football,” Sterling said. “I was always a really big kid, so I just did it [in the summer] to try and get into better shape. But I would tell myself no when it came to playing football. I guess I was scared, at least a little bit.”

“If it weren’t for Coach Leniz, I wouldn’t be playing football,” Sterling admitted. “He pulled me out in eighth grade and said, ‘You’re going to join the football team.’ And right away I decided to be the best I could be.”

That’s when Sterling’s alter ego as Farmer Dan turned out to be a blessing.

“Farmer Dan was the fun-loving, do-just-about-anything athlete,” Sterling said. “Austin was not. So in sports, I became Farmer Dan. And being Farmer Dan helped me to come out of my shell, and it helped me to work hard to be the best I could be.”

The 5-foot-11, 285-pounder quickly became a key component of the Braham football team, seeing extensive action on both offense and defense. He also joined the wrestling team and lettered at 285 pounds, winning the Great River Conference title at that weight as a junior to lift the Rush City-Braham co-op squad to its first league title that season.

“He’s a leader on the field, but he’s also a leader in the locker room and in the classroom,” Kuhnke said of Sterling. “I know I can count on Austin to always make the right decision. As a coach, and as an adult in our school, that’s very comforting to know.”

And part of reason for that, Sterling admits, is his desire not to tarnish the Farmer Dan name.

Part of the reason Sterling signed to play football at Minnesota Morris was that program’s willingness to allow him to play defense rather than offense.

“I’m a defensive guy,” he said. “When I see someone on the other team with the ball, I want the ball more than they do. I try to be the aggressor.

“I don’t like being an offensive lineman, because there’s no adrenaline rush to blocking someone. When you’re coming through the line at 100 miles an hour, it’s a fantastic feeling. You get to smoke someone, and making the play is a great feeling.”

“He puts 100% effort into everything he does,” Kuhnke said of Sterling. “He leads by example, whether it is on the practice field or the game field. His motor never quits, especially on the defensive end. Whenever he sees the other team with the ball, he gives it his all to make sure that ball carrier is down on the ground.”

But Farmer Dan said there was more to his decision to sign with Morris than just football considerations.

“I felt I was at home – it’s a small college in a small town,” Sterling said. “I don’t want to go to big school or a big city. And it’s a school with small class sizes and a close-knit team. It reminded me of home.”

At the Signing Day ceremony, which was attended by a number of Braham students and teachers as well as Sterling’s family members, he was reminded that he had a lot of people to thank for that special day.

“I thank all of my football coaches – Coach Kuhnke, Coach [Chris] Grote, Coach [Nick] Hohn, Coach [Per] Gulbranson, and especially Coach Leniz,” Sterling said. “I thank a lot of my teachers, because they pushed me to be a better student than I was an athlete.

“And I thank my family – especially my parents, Bob and Jodi Splittstoser – for getting me through every day of sports, helping me deal with injuries and coming to games to support me.”

The only downside to the Signing Day event was that it made Sterling realize that the legend of Farmer Dan at Braham High School would soon end.

“It’s weird to know I won’t be home anymore,” he said. “I’ll be three hours away, playing football and going to school at a place with weird, new colors to me.

“I’ll always be proud of the blue and gold [of Braham], but now it’s time to move on to the maroon and gold [of Minnesota Morris]. It’s on to the next chapter in my life, and I’m excited about that.”