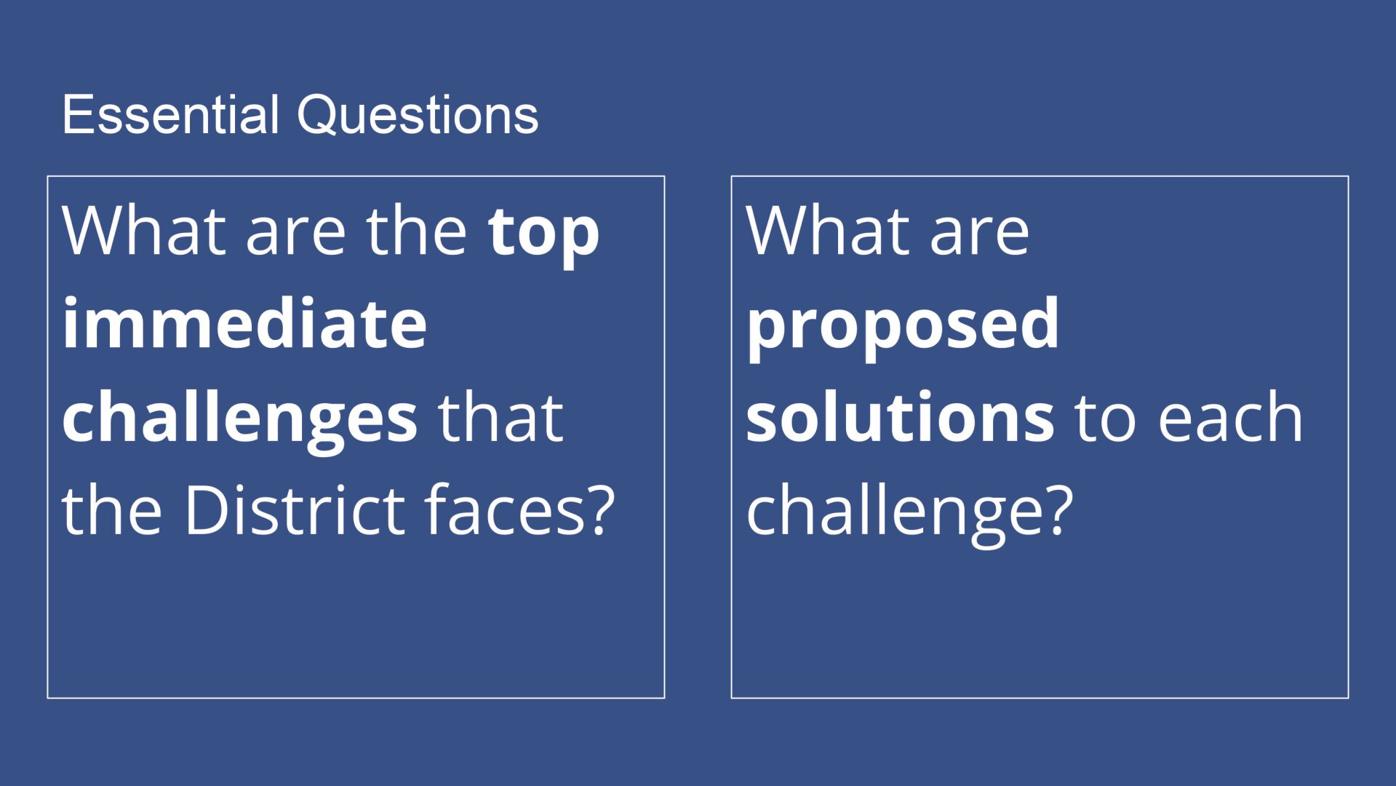 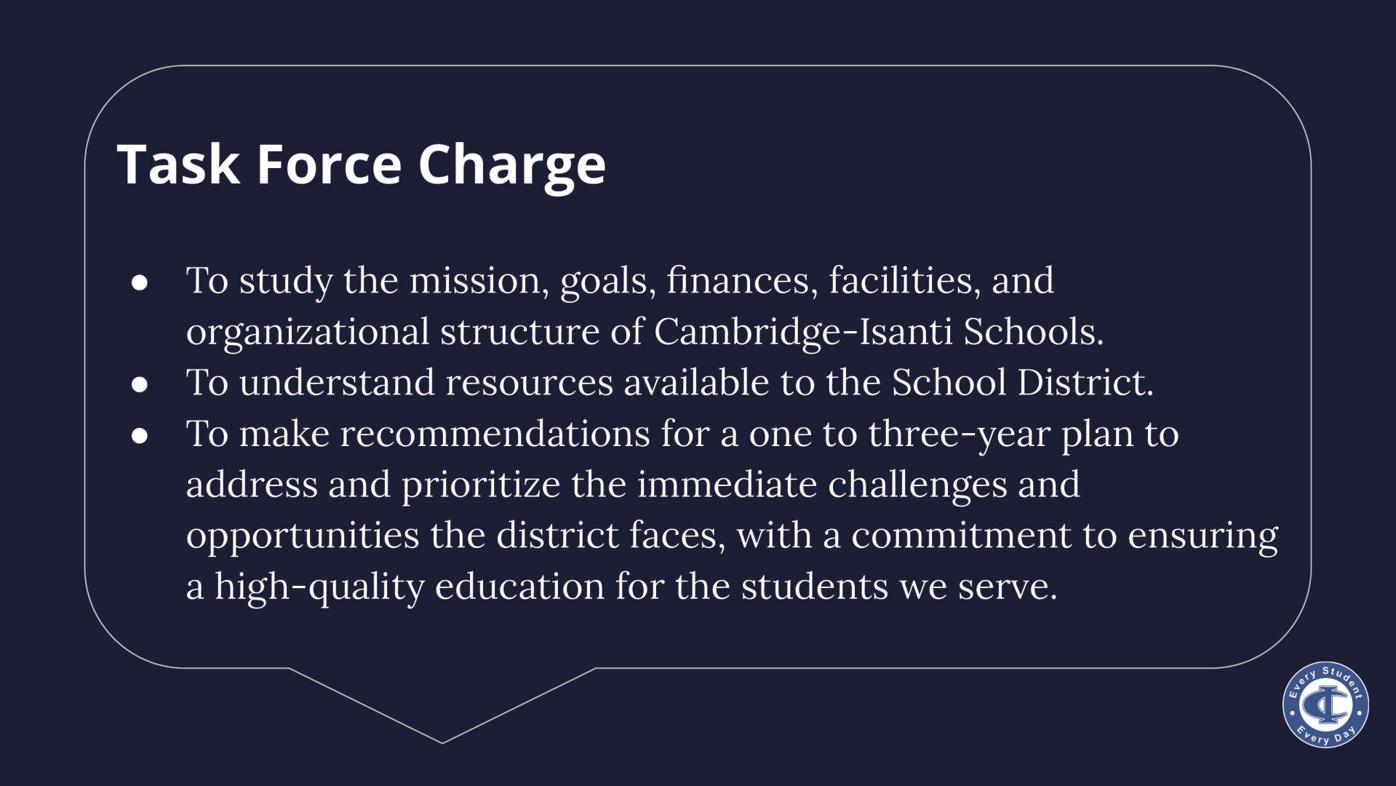 Addressing challenges and finding solutions with limited financial resources is one of the goals of the Cambridge-Isanti Schools Community Task Force.

During the Cambridge-Isanti School Board meeting June 24, Superintendent Nate Rudolph explained the Community Task Force was put together around December 2020, soon after the last failed referendum vote in November 2020.

• To study the mission, goals, finances, facilities, and organizational structure of Cambridge-Isanti Schools.

• To understand resources available to the school district.

• To make recommendations for a one-to-three-year plan to address and prioritize the immediate challenges and opportunities the district faces, with a commitment to ensuring a high-quality education for the students they serve.

“So they’ve been hard at work meeting once a month since then,” Rudolph said.

Rudolph explained the task force includes 39 members, of which half are school district employees and half are parents of students and community members. He said the members represent a diverse group of people, providing expertise in business, finance, schools, human resources and social services.

Rudolph said the task force looked at two essential questions: What are the top immediate challenges that the district faces, and what are proposed solutions to each challenge?

After the initial meetings, the task force was divided into a teaching and learning subgroup focusing specifically on the impact budget reductions have had on the teaching and learning department. The subgroups included teachers (instruction and relationships), leadership, curriculum, and culture and climate.

“Over the last three years, we have cut our budget by $8.5 million. We have cut teachers, reduced staff in arts and elective areas and delayed textbooks and curriculum purchases. This puts more pressure on staff to create curriculum as aligned as we move forward and look for more up-to-date resources,” Rudolph said. “We know that we have strong schools; we need effective teachers, strong leadership, well-designed curriculum and provide supports to build a positive school culture and climate.”

Rudolph mentioned some of the specific reductions the district has made.

“By the numbers, we have cut more than 100 positions in our district in the last three years. Our class sizes are not where we want them to be,” he said. “Following the pandemic we know that parents are worried about loss of instruction time and rebuilding relationships with teachers and staff; that will be critical for our students’ success. And our curriculum and supply budgets have been cut by more than 57%.”

In the area of budget and finance, the group has taken a closer look into school funding, district budgets, and revenues and expenditures.

“The funding gap that C-I Schools experiences each year is represented by $1.7 million of a structural deficit,” Rudolph. “But at our last meeting, there was a clear consensus that we in fact do have a significant revenue problem, and that a referendum should be considered for this fall. It is anticipated that the information would be included in upcoming recommendations to the board.”

Rudolph said the task force helped recommend to the school board that the district needs to move to a two-tier bus service next year as well as food service fee considerations. However, it was noted that all district students will receive free meals next year through a waiver granted by the United States Department of Agriculture.

“A subgroup is currently working on preparing recommendations for structural changes,” Rudolph said. “We’ve talked a little bit at this table about the large significant changes that would need to take place if there’s not a solution to our current revenue situation.”

Years of deferred maintenance is taking its toll on district facilities, Rudolph said. He said the district owns 11 buildings, totaling 1,045,000 square feet of building infrastructure and 300 acres of grass and ball fields.

“A plan to resolve these challenges is being developed by district administration and details will be proposed to the school board in the coming months,” Rudolph said. “So those are things that are the very top most critical items in our infrastructure that can’t wait to be fixed.”

“So it continues to perpetuate the ‘haves’ and the ‘have nots.’ And we unfortunately end up as one of those districts that is in the ‘have nots,’ ” Rudolph said. “Legislative funding, on the formula, has not kept up with basic inflation rates since 2003.”

Rudolph said under the current education budget proposal, as described earlier in the meeting by State Sen. Mark Koran, it calls for a 2.45% increase in education funding in fiscal year 2022 and a 2% increase in fiscal year 2023. Rudolph said this would lead to approximately $900,000 of additional funding for the district in 2022, leaving the district with $830,000 on the structural deficit.

“So said differently, we would need to cut just under $1 million next year if nothing happened, if nothing else happened, to help us with that gap between the revenue we get from the state and the lack of,” Rudolph said. “And so we are still facing that structural deficit and again after the $8.5 million. To do that, that just balances it for the next year.”

In 2023, Rudolph said the 2% increase in funding would result in approximately $700,000 in additional funding for the district, assuming the district has balanced its budget by making the proper budget reductions in 2022.

“So again, in year two (2023), we would be facing about another million in cuts in year two,” Rudolph said.

He said in the next few months the task force will be providing various reports and proposals to the school board, and he gave much credit to the work the task force is doing.

“As you know these meetings are voluntary and the service that they provide to the school district is invaluable,” Rudolph said.