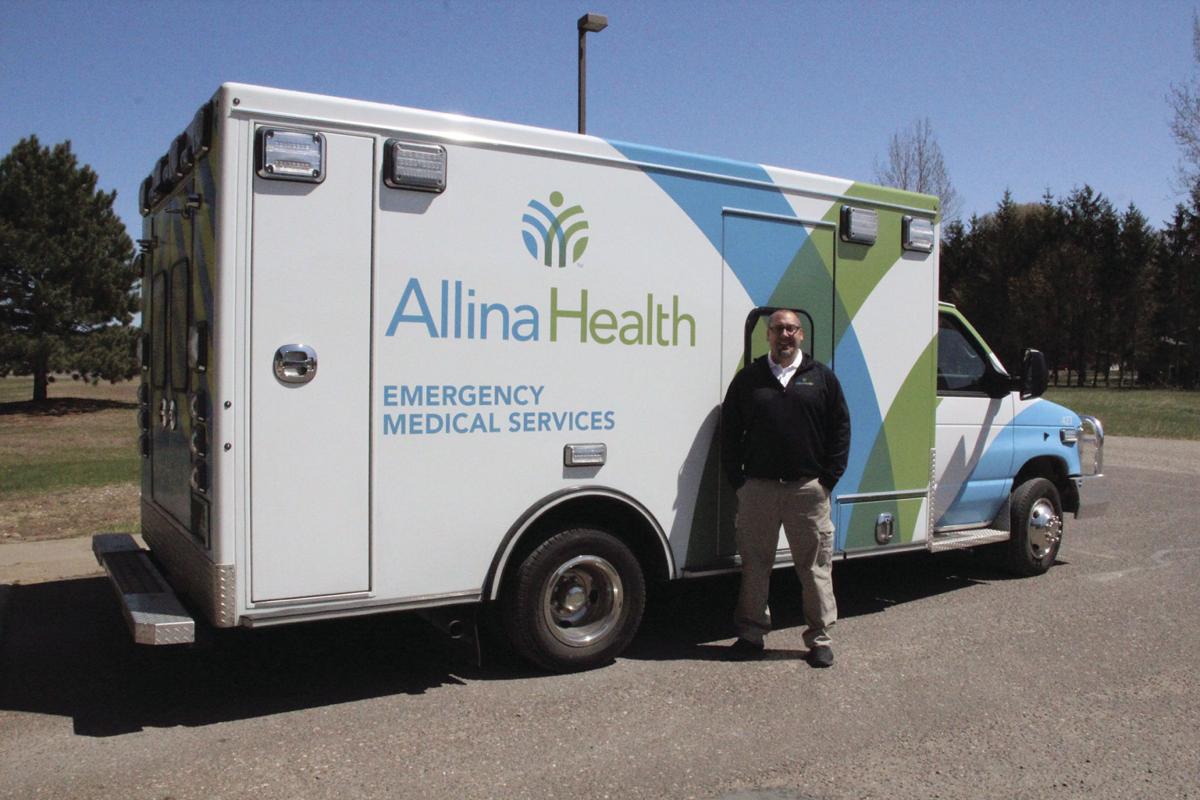 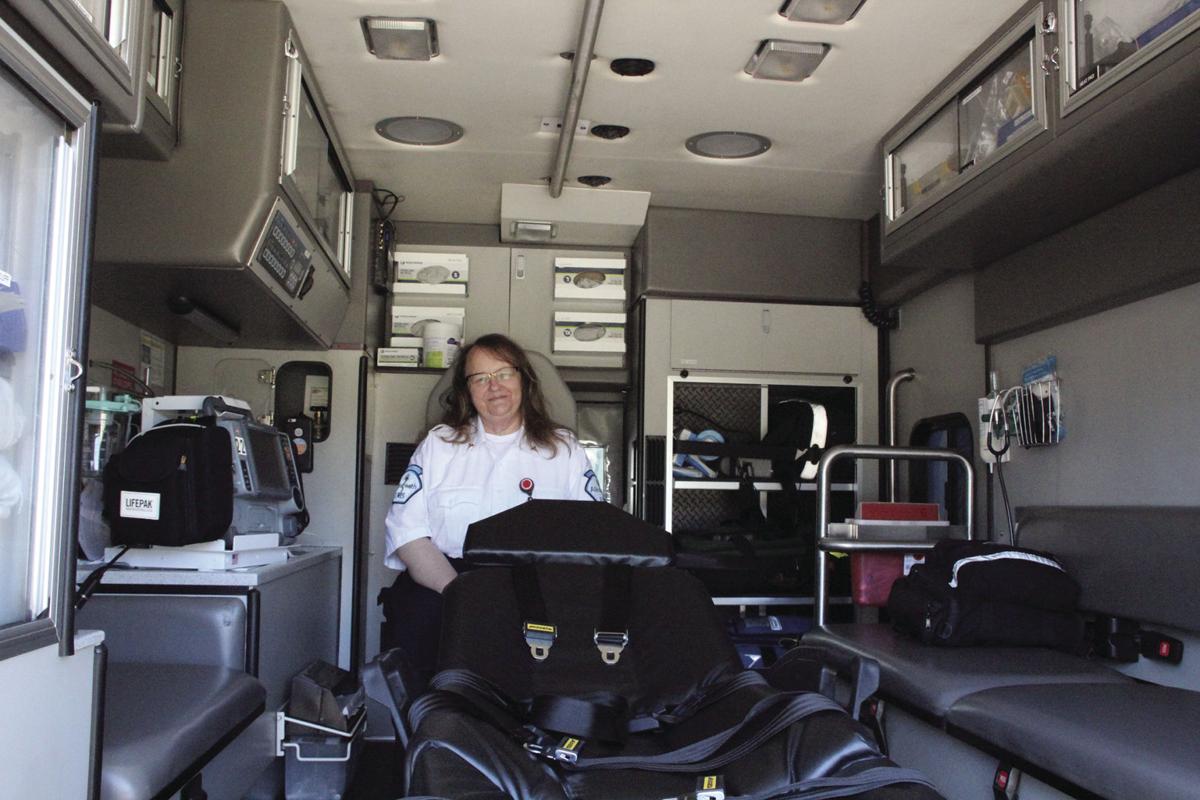 From crashes to cardiac arrests, allergic reactions and stand-by calls for possible suicide attempts, the EMTs and paramedics of Allina Health Emergency Medical Services, North Rural Region, are there to assist.

“We have a large service area which spans from the Kanabec County line north to Bunker Boulevard in Ham Lake to the south. Our east border divides Rush Lake and extends south in a straight line. To the west we run from the Dalbo area south through St. Francis and over into the city of Ramsey,” said ambulance operations manager Bruce Hildebrandt. “We currently have 49 EMTs and paramedics we are responsible for. In 2000 we were running about 2,700 calls for service a year; in 2019 we ran 7,700 requests for service.”

Among those at Allina’s Cambridge location are Braham resident Lisa Rowe and Isanti resident John Sassen, who have a combined total of 50 years of service.

For Rowe, an EMT, the journey to working in the field began by taking a class for fun with a few friends.

“I never knew I wanted to be an EMT. I actually had no interest in anything medical,” Rowe said. “The hospital in Rush City put an ad in the paper offering the EMT class in return for a one-year contract to work for them on the ambulance. A couple friends and myself talked it over and decided to sign up. We took our required CPR class and off we went. Never in a million years did I ever think I’d be still doing it 28 3/4 years later.”

Growing up in Braham, Rowe knew she wanted to return to the community to serve the area once she was certified.

“I grew up in Braham, moved several times, but always ended up back in the area. Once in the EMS field, I knew I wanted to serve the people of my community and surrounding communities,” Rowe said. “I found out that rural EMS is very challenging, and I loved that about it. I’ve done odds and ends of schooling over the years, but EMS is where I’ve stayed.

“My EMS career started out at the hospital in Rush City and the ambulance service they ran. They also paid for my schooling in return for a one-year contract to work for them. I was in EMS prior to Allina being in the area. When I started, the hospital was still Cambridge Memorial Hospital and we had one ambulance in Braham (on call), and Cambridge had an on-call crew, and I believe they may have had a list of people who could be used as back up, if the on-call crew had to go on a transfer,” Rowe added.

Over the years Rowe took additional classes to enhance her abilities and be more versatile on the job, which led to her becoming an advanced life support EMT.

“I have basic skills such as first aid and CPR, but due to being an ALS (advanced life support) EMT, I also do IVs, I have a small list of medications I’m allowed to give, and am allowed to do higher skilled procedures under the direction of my paramedic partner,” Rowe said. “We are required to do 48 hours of continued education every two years to maintain our certification. Airway, cardiac, trauma, IV pumps, vents, and various other things as required by the state and our employer.”

Throughout her years in the field many things have changed, but one thing that’s always stayed the same is her appreciation of her partners and her dedication to the community.

“It’s an ever-changing job. If you had a heart attack 28 years ago, your chances of living were extremely low. Now we diagnose in the field, start giving medications (nitro and aspirin) and your chances of living are quite high. That’s why we say to call as soon as you start having chest pain and/or difficulty breathing. We can’t help you if you don’t make the call,” Rowe said.

According to Rowe, the best parts of the job are her partners and the patients — in that order.

“If you have a great partner, it changes the whole dynamic of the job,” she said. “This can be a very emotional job. We see things in a day that most people don’t see in a lifetime. Having a great partner makes the hard calls easier, and the whole job better. I have always loved to talk to people and learn from them. I always said I could talk to a wall and have a perfectly good conversation. I learn so much from my patients, and with my gift to gab I have the gift of being able to calm them down and not make their emergency quite so scary.”

Rowe’s dedication doesn’t go unnoticed by those she works with.

“Lisa is local and very passionate about providing excellent care to the communities she was raised in Isanti County,” Hildebrandt said. “Lisa cares about the well-being of her patients and also all of the local first responders we interact with on a daily basis. She also enjoys cooking and providing treats to staff as she experiments with new recipes.”

Sassen’s journey began in high school when he enrolled in an EMT class.

“I grew up in the north metro and went to school at Centennial elementary and high school in Circle Pines. In high school there was a 916 program through Century College and they offered an EMT class. I was able to enroll and took the class to see what it was all about. I graduated high school and went on working several other jobs. Over a couple years I started to miss the feeling of EMS. I went back to Century College, taking an intermediate class for paramedic, and then moved into their paramedic program,” Sassen said.

“I was able to obtain a job with AHEMS as a vehicle service technician restocking ambulances with equipment, caring and servicing the ambulances for the next oncoming crews to start their shifts. After eight months I was able to obtain an EMT position working shifts out of the ambulance. I would do basic hospital-to-hospital transfers and discharges, which lasted for three months until I was able to get a paramedic position after graduating the paramedic program with Century College. I have been working with AHEMS for the entirety of my career,” Sassen added.

Through his journey, Sassen took advantage of additional training opportunities, which led him to his supervisory role and as a representative for Allina at community events.

“As a paramedic, I respond to 911 calls and hospital transfers. As a clinical coordinator, I focus on internal education for my peers and some external education for first responders. As an FTO, I help orientate new hires to the area, protocols, skills and operations. Many people have potentially seen me at career fairs, STEM events, local schools, and the ARCC doing events or education,” Sassen said. “Over the years I have exceeded expectations, taking classes above and beyond to enhance my knowledge for EMS. This has helped benefiting me to get into an FTO and clinical coordinator role that I am currently in.”

For Sassen, it’s the unpredictability that drives him on a daily basis.

“What I find to be the best part of my job is the people I work with and the patients I encounter. Every day is different and unpredictable. You never know what that next call is going to be or where you will be sent. This keeps me on my toes and honest. The thought of knowing I have improved and saved lives is very rewarding or being at the side of someone who needs that reassuring moment. I enjoy meeting new people daily and having conversations with them,” Sassen said.

Sassen’s dedication to continued education and sharing his learning with his partners is one thing that stands out about him, according to Hildebrandt.

“John has a passion for teaching and enjoys the opportunity to share his clinical expertise with our local first responders and community,” Hildebrandt said. “I have had the pleasure of having both John and Lisa as employees for 20 years. It has been fulfilling to watch each of them grow as individuals and as pre-hospital providers. Our system has grown significantly over the last 20 years and they both have had a role in this growth.”