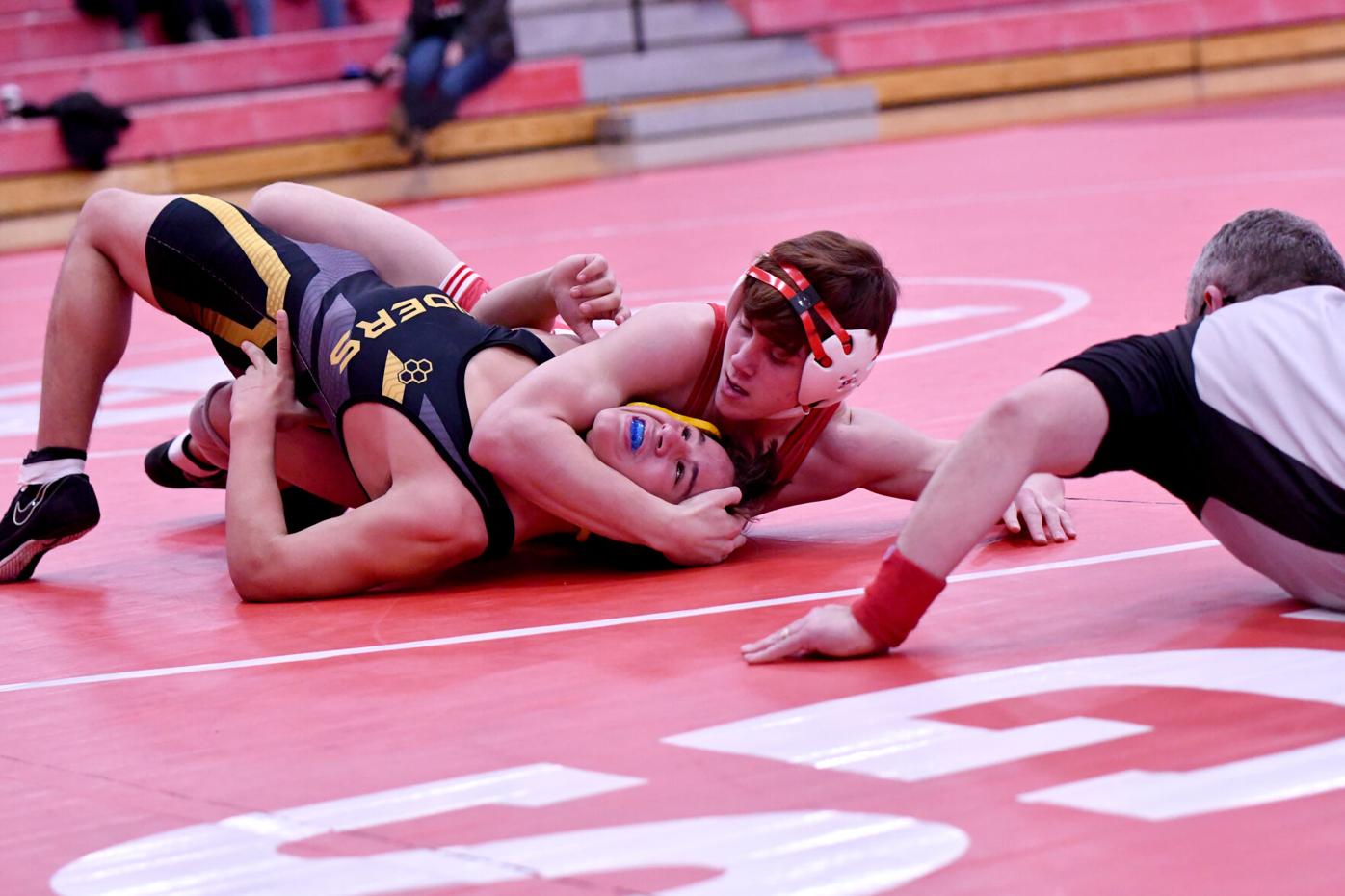 Junior Ashton LaBelle, who has a career record of 104-40, is ranked eighth in the state among Class 2A wrestlers at 152 pounds. Photos by Jorge Perales 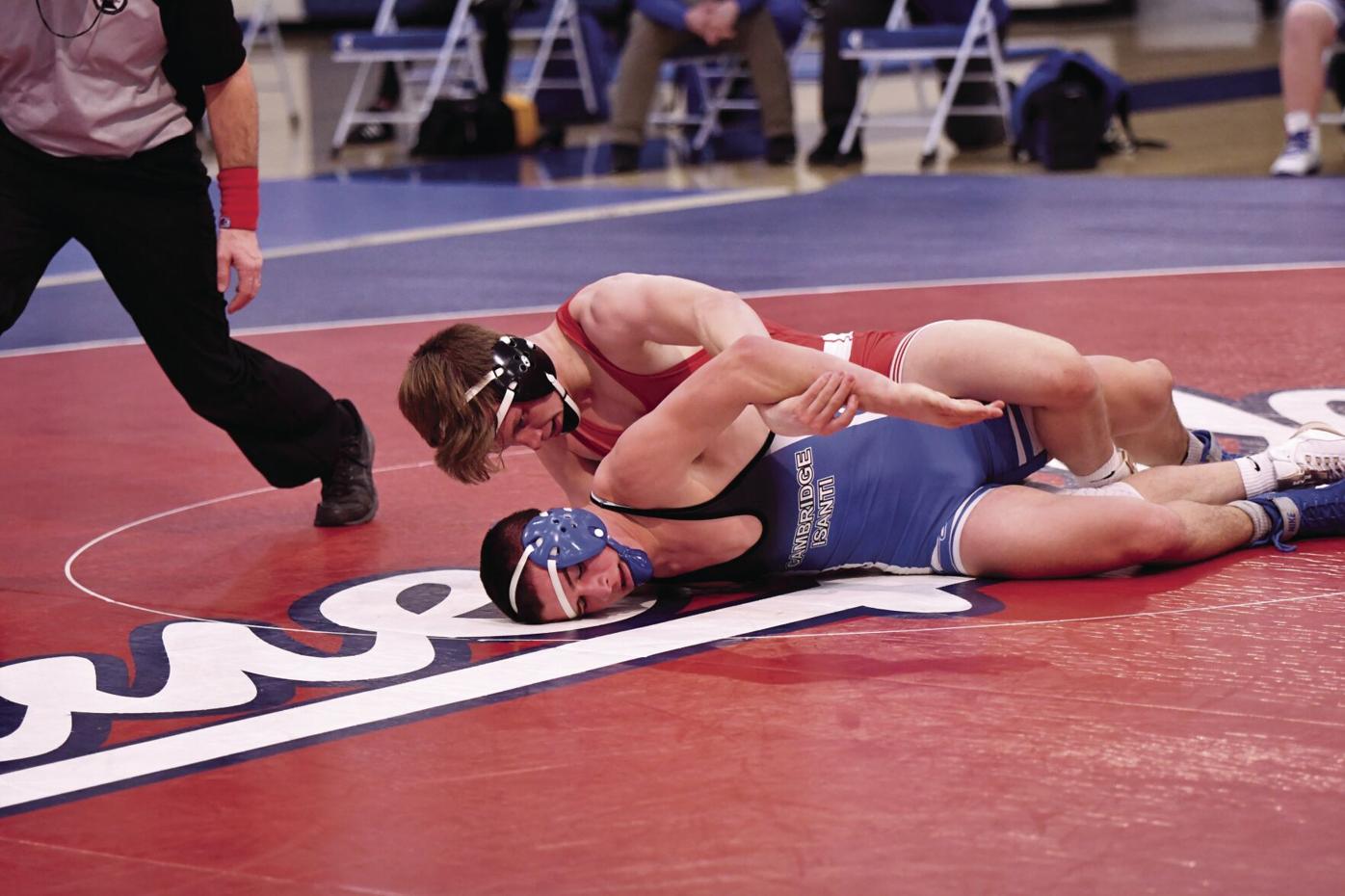 Junior Brandt Bombard, who is ranked fifth in the state at 160 pounds in Class 2A, has recorded 63 pins in his career. 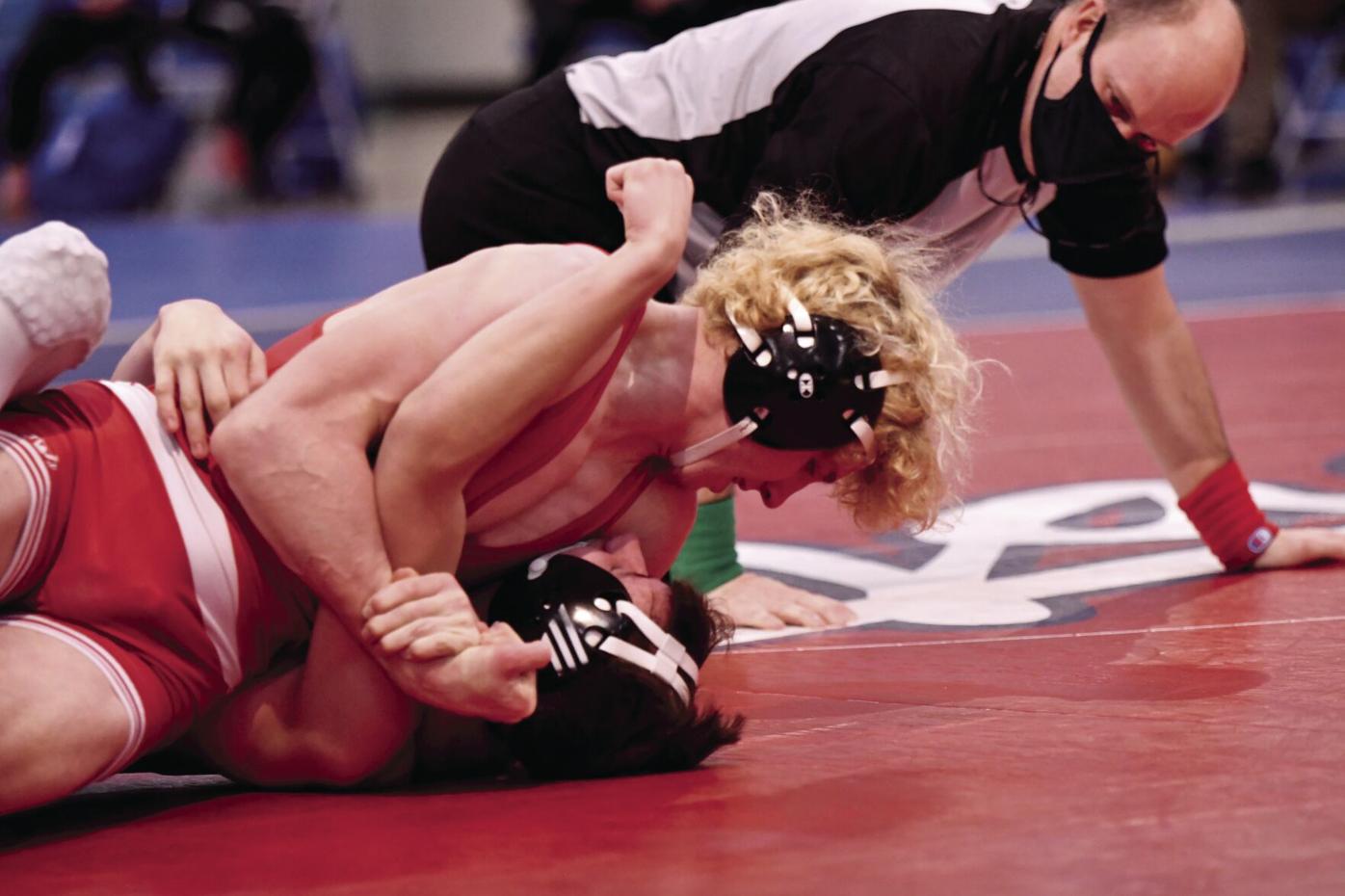 Senior Josh Logan is just five wins shy of 100 in his career as he works to return to the state tournament for the third straight season. 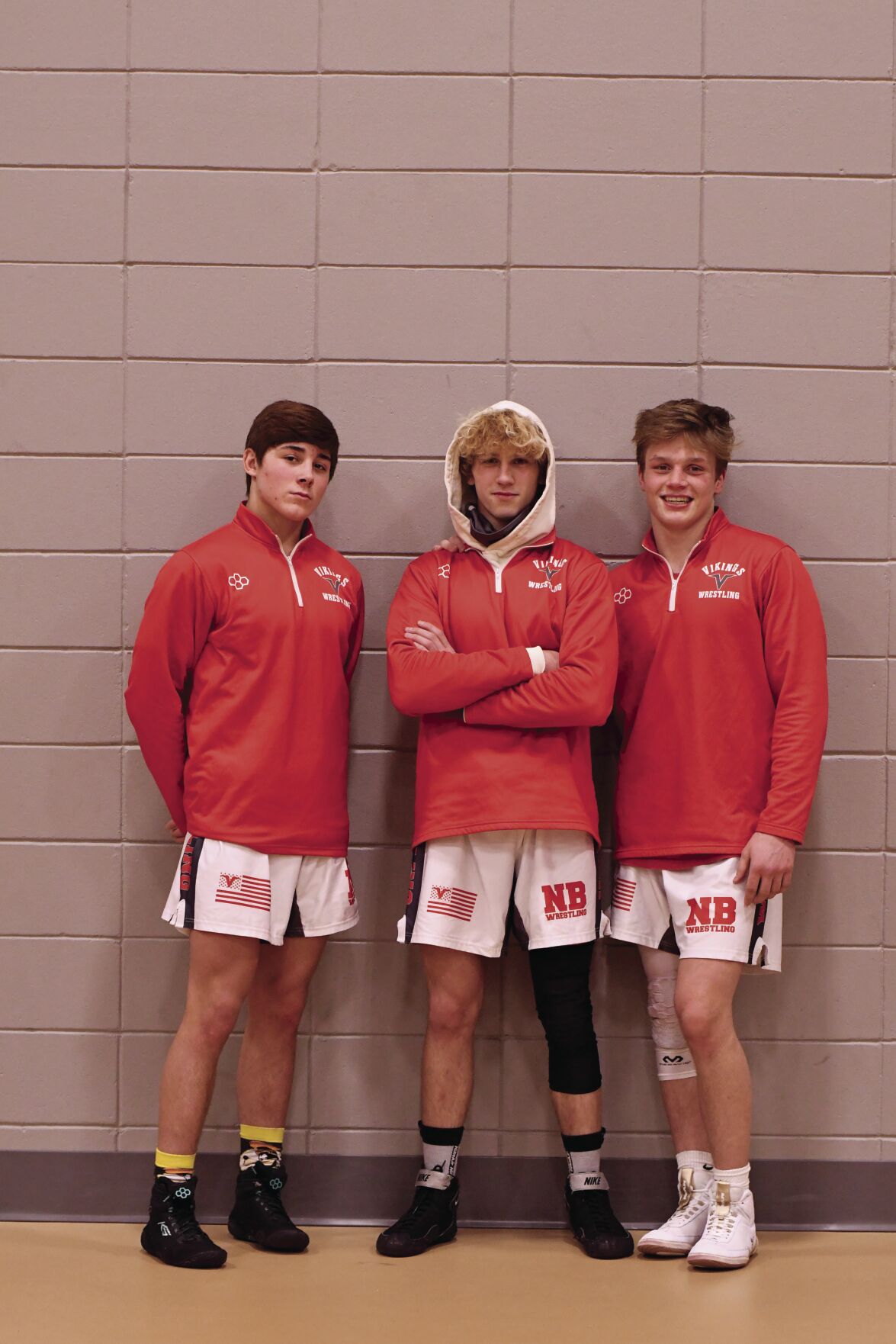 Junior Ashton LaBelle, who has a career record of 104-40, is ranked eighth in the state among Class 2A wrestlers at 152 pounds. Photos by Jorge Perales

Junior Brandt Bombard, who is ranked fifth in the state at 160 pounds in Class 2A, has recorded 63 pins in his career.

Senior Josh Logan is just five wins shy of 100 in his career as he works to return to the state tournament for the third straight season.

North Branch wrestling coach James Hoard has created a simple slogan to guide his program: “Those who stay will be champions.”

“It’s not easy, because we work our kids pretty hard,” Hoard said. “But we preach that they will be better wrestlers and better people if they stick with the program.”

Now that motto has extra meaning thanks to the work of senior Josh Logan and juniors Brandt Bombard and Ashton LaBelle. All three have won close to 100 matches and made multiple state appearances, and their leadership is apparent to Hoard as he welcomes a new crop of younger wrestlers into his program.

“By the time they got to high school, all three were natural leaders,” Hoard said. “They were willing to work, they did what they were told. You can tell them what to do, and you don’t have to worry about it because you know it will get done the way you want it to be done. These guys have stuck with our program, and it’s a good feeling to see these guys have the success they have earned.”

All three are pushing to return to the state tournament this winter after falling just short of medaling last year.

“Just getting to the state tournament, knowing that you worked all year to get there, and then coming away with nothing is honestly the hardest part,” Logan said. “When the three of us talked about it, we realized we could use it to push us to get better. We worked every single day in the summer, so we can accomplish great things.”

LaBelle agreed, adding: “We were satisfied, but we also were unhappy. We knew we had to work harder. That flipped a switch in our brains to work harder.”

What makes this trio especially interesting is that they have developed different styles to find success.

Josh Logan started wrestling in third grade – but not by design.

“My mom gave me a pamphlet of things to do and said, ‘Pick something out,’” Logan said. “I guess I pointed at wrestling, because that’s how it started out. I had no clue what was going on at first, but it was a lot of fun. And as time went on, I really got into it.”

Things really began to click for Logan when, as a sophomore, he qualified for the state tournament at 126 pounds, and last year he earned a return berth at 132. He entered this week with a career record of 95-32 with 39 pins, and he is on the edge of the state rankings for 145-pound wrestlers in Class 2A.

“He’s more of a brawler,” Hoard said of Logan. “He’s rough, but he does have good technique. When he gets on top, that’s when he’s at his best.”

That assessment was echoed by LaBelle and Bombard.

Bombard added: “Josh is very physical – he sets the pace and sets a tone that he’s going to win the match. He likes to assert his dominance right away.”

Logan had a special word of thanks for his parents, Charlie and Jenni Westman.

“I thank my mom the most, because she’s driven me all around the state – all around the Midwest – for tournaments and camps,” Logan said. “They have paid for all of these things since I’ve been a little kid. And I thank all of my coaches for helping me improve.”

Ashton LaBelle’s dad introduced him to wrestling in first grade – and it was love at first sight.

“The first couple of classes, I was really excited,” LaBelle said. “And the more I did it, the more I wanted to do it.”

He earned his first state tournament berth in the eighth grade at 106 pounds, and he returned to the state meet last year at 145. The junior enters this week with a 104-40 career record that includes 23 pins and 16 technical falls, and he is ranked eighth in the state at 152 pounds.

“He’s a takedown guy who can [technical] fall opponents,” Hoard said of LaBelle. “He’s a finesse wrestler on his feet and on the mat. He’s good at popping up and popping out [from the down position], and he’s good at tilting opponents.”

Both Logan and Bombard mentioned LaBelle’s physical abilities as a key to his success.

Logan added: “He’s very quick. I would be nervous to wrestle against him, because you can tell he’s solid.”

LaBelle thanked his parents, Jason and Heather, for their support of his wrestling career.

“I really need to thank my mom and dad, and also God, who has given me the chance to stay healthy and get better,” Ashton LaBelle said.

When Brandt Bombard was born, his parents lived in the same neighborhood as Hoard.

“When I met Brandt for the first time, I lifted him up, and then I said, ‘This feels like a wrestler,” Hoard said.

That came true starting in kindergarten, and Bombard quickly took a liking to the sport.

“I loved the fighting and brawling part of it,” he said.

Success came quickly, starting with a berth in the state tournament at 113 pounds in eighth grade, followed by return trips as a freshman at 126 and as a sophomore at 138. Bombard enters this week with a 105-36 career record that includes 63 pins, and he is ranked fifth in the state at 160.

“He’s really good on his feet, a good technician,” Hoard said of Bombard. “On the mat he’s a brawler. He’s going to break you down, wear you down, and pin you. He’s going to have things his way.”

Both LaBelle and Logan have noticed a step forward in Bombard’s work rate this winter.

“He’s very technical – probably the best technician in our room,” LaBelle said of Bombard. “And he’s really a hard worker. His motor is always running.”

Logan agreed, adding, “This past year, he has really stepped up to another level. He’s always pushing – you can tell that he’s the aggressor.”

Bombard thanked his parents, Cory and Mandi, for their support of his wrestling career.

“My parents have pushed me every day, and they guide me,” Brandt Bombard said. “And I also want to thank all of my coaches, including my coaches at Pinnacle Wrestling; they have all helped me to be the wrestler I am today.”

It is an advantage for North Branch to have three state-caliber wrestlers, but the advantage is doubled when you consider they are close together in size.

“Them being at similar weight classes to compete against one another, and to have them train together, has made all three of them better and better,” Hoard said. “They feed off one another and learn from each other.”

LaBelle said another advantage is that all three have different styles.

“Our styles are so different, we can give each other unique looks,” he explained. “It helps you get an idea of how other wrestlers work. They’ve made me tougher by shoving my face in the mat a few times.”

At times, things can get a little, well, “competitive” with this North Branch trio.

“It can get crazy,” Bombard admitted. “We’re there to drill, but it can get scrappy. But we’re always friends, because we know the goal is to make each other better.”

And the long-term goal is to make them not just better, but champions.

“Coach said that a few times when I was younger, and when I heard it I didn’t think about it,” LaBelle said. “In eighth or ninth grade, it kind of dawned on me what he was saying.”

Bombard said that phrase has helped carry him through difficult patches.

“Kids can get stuck when there’s a bump in the road,” he said. “But you have to stick with it, keep grinding – and use it as motivation to do greater things.”

Upon reflection, Logan said as a senior he can see how true those words have become after all the work he has put into the program.

“I’ve been wrestling for a while now, and every year we see some new kids come in – and some of them don’t make it through even that season,” he said. “It’s mentally and physically hard. But if you stick with it and work hard, you will get better.”

Yes, Hoard is proud of his three top wrestlers. But as excited as he is by their success, he takes greater pride in them as walking proof that the system works.

“I’m looking forward to the impact these three have on our younger wrestlers, our middle schoolers who work out with us,” Hoard said. “Any middle school wrestler who watches them will know what it takes to make it to state – and have success. In anything.”