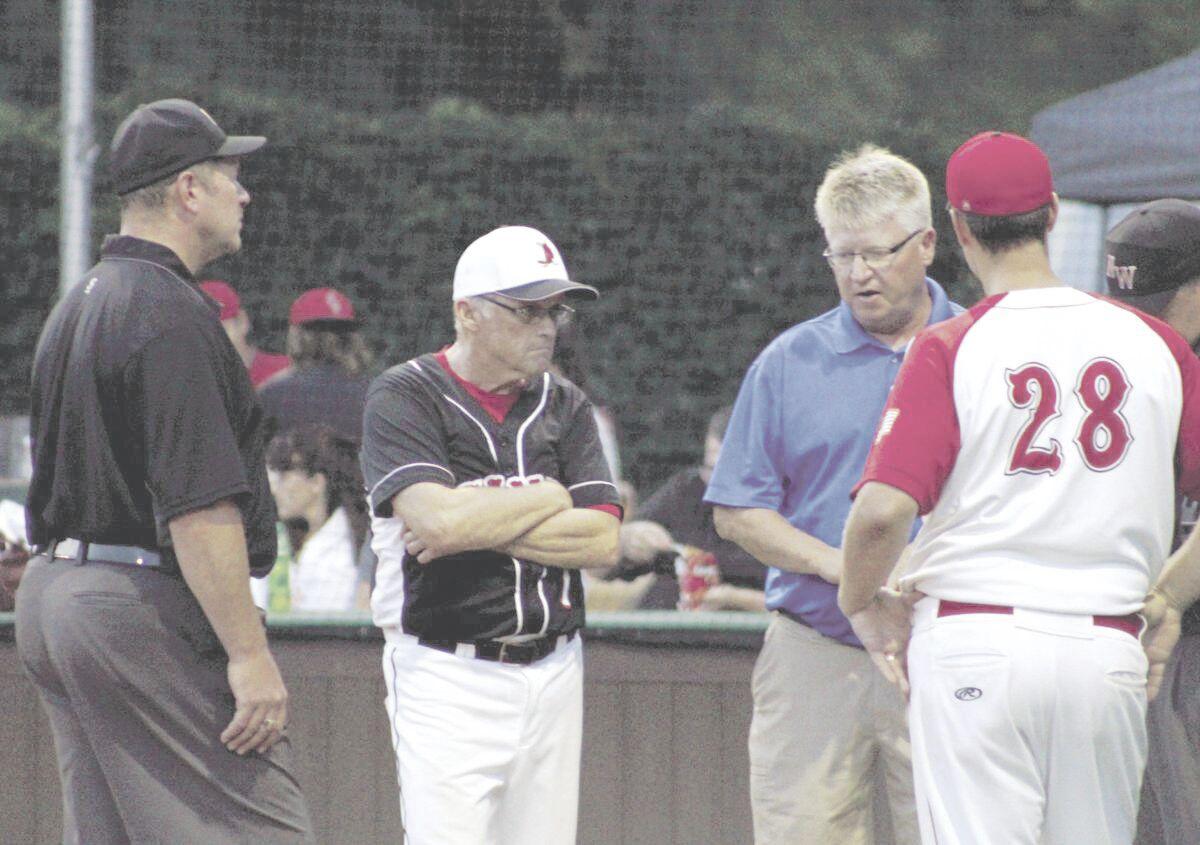 Isanti manager Steve Allen meets with umpires and tournament officials at home plate prior to the Redbirds Class C State Baseball Tournament contest last season. Allen has put safety measure in place that he hopes will allow his team to play this season. File photos by John Wagner 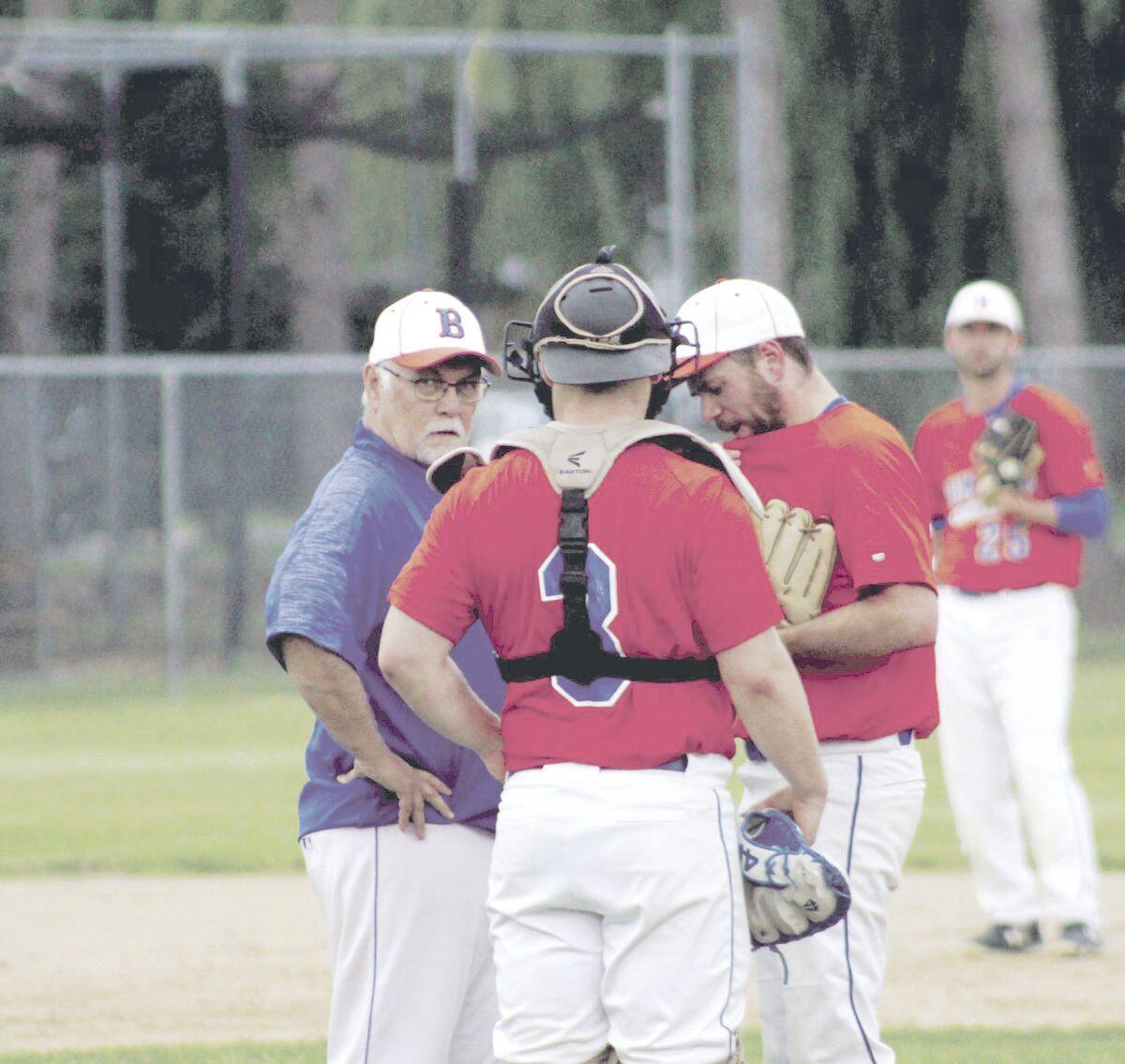 Rum River manager Tom Koplitz, left, leads a meeting on the mound last season. Koplitz would prefer to see this season canceled and have Town Ball return in 2021.

Isanti manager Steve Allen meets with umpires and tournament officials at home plate prior to the Redbirds Class C State Baseball Tournament contest last season. Allen has put safety measure in place that he hopes will allow his team to play this season. File photos by John Wagner

Rum River manager Tom Koplitz, left, leads a meeting on the mound last season. Koplitz would prefer to see this season canceled and have Town Ball return in 2021.

It did not take long for a local Town Ball team to realize that this season would be different.

Clearly the pandemic will affect Town Ball, the summer baseball staple around the state. The Minnesota Baseball Association, which governs the sport statewide, wrote a letter to Gov. Tim Walz asking for the go-ahead to start the season.

But Adam Gallatin, manager of the Forest Lake Brewers, realized the pandemic and the recent events surrounding the death of George Floyd in Minneapolis have overshadowed concerns over the start of the Town Ball season.

“I assume this might lose the governor’s attention – and rightfully so,” Gallatin said. “This might push things back even further. But we see a lot of neighboring states are starting to play – the Dakotas and Iowa are opening things up. I hope we are able to follow their lead with guidelines in place.”

Area teams are at varying points in preparing for this season. One of the more aggressive teams in the area has been the Redbirds, who already have practiced four times – using that list of rules that also includes not having more than 10 players together at one time, and not sharing equipment such as helmets and bats.

“We knew from the beginning we would have to change habits,” Allen said. “I’ve told our guys that we have to keep following these rules so that they become habits. And if something happens, we have to react – fast.”

Allen’s wife is a nurse and his son is a doctor, so he said he has not pushed his players to participate if they have any concerns for their health.

“I’ve told the guys: If you don’t feel comfortable, this is not mandatory,” he said. “If they’ve got someone at home who is vulnerable and they don’t want to take a chance at exposure, we totally understand.”

Tom Koplitz, the manager of the Rum River Bandits based in Cambridge, is at the other end of the spectrum. His wife, Julie, is a respiratory therapist dealing with COVID-19 patients at Fairview University Hospital, and he strikes a much more cautious tone.

“I understand people want to play – I’ve been an amateur baseball nut since the 1960s,” Koplitz said. “I’d like to get this going as much as anybody. But what are we gaining by doing this, and is it worth it? How are we going to conduct a game that is safe?

“If one person – a player, umpire or fan – gets this disease at a game, it’s not going to be worth it. To risk anything over baseball? How bad would you feel if one of your players, or one of your fans, got sick and died? That would taint our amateur baseball experience forever.”

Koplitz said he hopes the MBA decides to cancel the 2020 season and return next year.

Gallatin said he and the Brewers meet somewhere in the middle.

“The majority of our guys are chomping at the bit [to play],” he said. “They call, looking for updates and information. They are excited to play. But at the other end of the spectrum, we have a couple of guys on our team who work in health care-related fields, and they have said they will have to forgo playing this season to keep safe the people they work around and live with every day.

“Everyone on our team plays because they love the game. People’s health and jobs are way more important than playing baseball, so their teammates understand.”

The Redbirds are ahead of other teams in terms of their preparation for the coming season, should it arrive. But they are behind past seasons, which generally start in early May.

“We schedule practices back-to-back: We’ll have 10 players from 5 to 7, then the other 10 from 7 to 9,” Allen explained. “We never have the full team together, so when we work on infield and outfield, we have to go through things twice. At the end of a practice, I’m pooped.”

The Brewers are at a point similar to years past – primarily because they do not hold many practices early in the season.

“Historically we don’t have a lot of practices or prep time because our guys are playing in high school or college in the spring,” Gallatin said. “When those seasons end, they come to us – and are ready to go. For now guys are getting their arms ready playing catch, but guys are probably going to be behind early in the season.”

Rum River has not held a practice yet.

“We had our first meeting a week or so ago in my driveway, social distancing,” said Koplitz, who turns 68 in a month. “And one of my guys said, ‘You’re not coming back because you’re in the high-risk category, right?’ He may have hurt my feelings a little bit, but it was pretty telling.”

Will there be a Town Ball season in 2020? Gallatin remains optimistic.

“The Minnesota Baseball Association is following the governor’s directives, and while he has not commented directly on amateur baseball, we are following his directives on youth sports,” he said. “The governor has started to open some things up, allowing practices with 10 people following social distancing guidelines.”

Allen said he feels the MBA is pushing for a season to begin by mid-June at the earliest and the Fourth of July at the latest.

“I really think the state board wants to salvage the season,” he said. “I’m optimistic that we’ll work something out – but I’ve been an optimist since the beginning, and I’ve been wrong every step of the way. I may be hopeful as much as I am optimistic.”