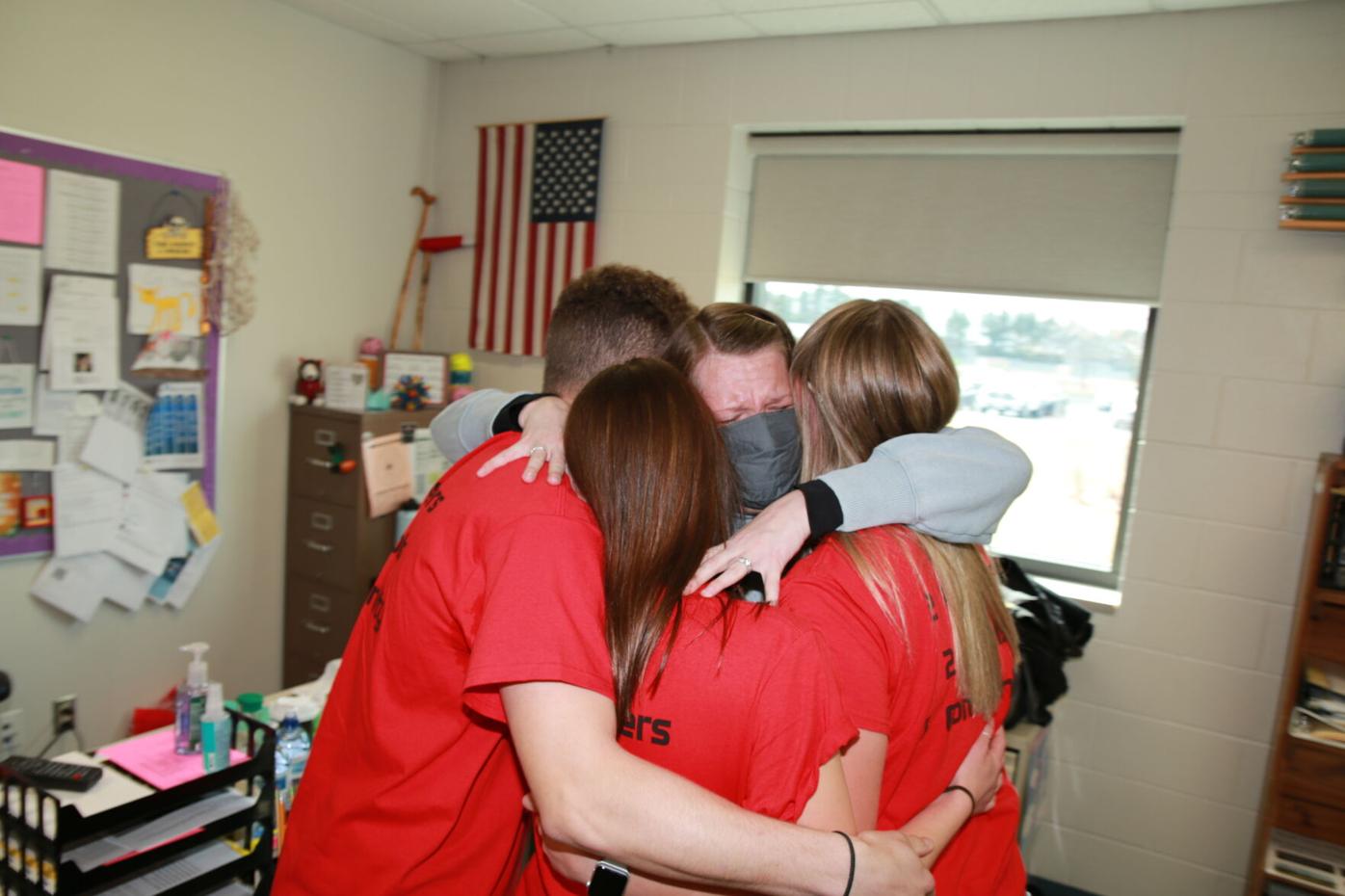 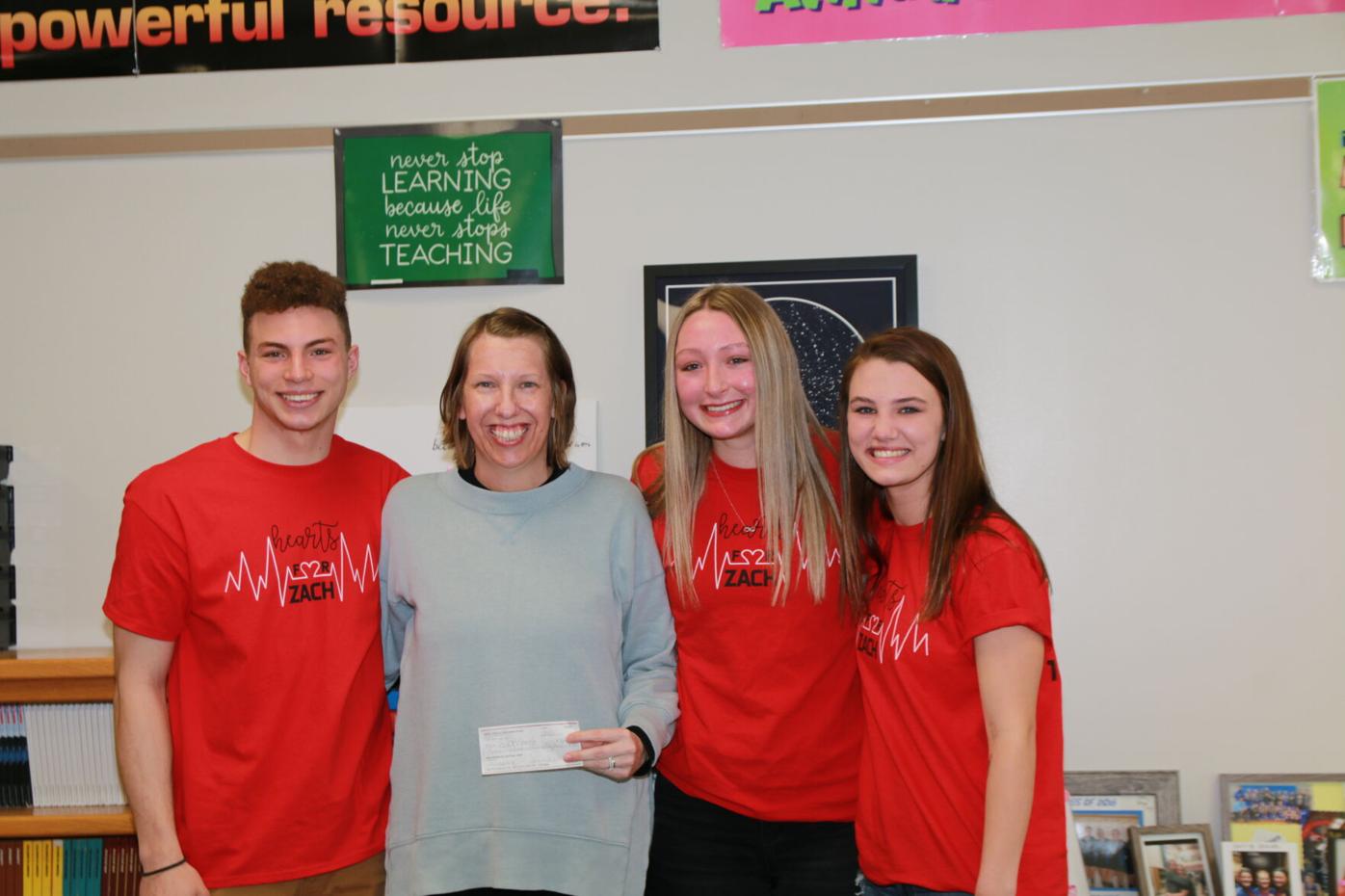 The seniors’ fundraising and support initiative began when they learned Stoltz recently had to undergo open-heart surgery and now is recovering.

The seniors involved include Jared Carpenter and Lydia Adams of Pine City High School, and Taylor Anderson and EllieMae White of Rush City High School. They produced red shirts with “Hearts for Stoltz” imprinted on the front, and “Two Teachers,” “Two Schools,” and “One Community” written on the back.

“So I knew Stoltz from sixth grade as a teacher, and I also had him as a football coach when I was in seventh, eighth and ninth grade,” Carpenter said. “So that’s kind of along the lines, why I was kind of brought into this, because he’s helped me through a lot through football, school and everything like that. So he’s a huge part to me, too.”

The reason for the two school communities coming together is because Stoltz is married to Rush City High School teacher and coach Erika Matzke Stoltz. About two years ago, Matzke-Stoltz was diagnosed with breast cancer and underwent treatment. She’s since recovered. Although the T-shirt fundraiser was dedicated to Zach Stoltz, it was also for showing appreciation and support for Matzke-Stoltz.

“She thinks very carefully about what she says, and that impacts us as players and us as students,” White said.

“Yeah, just everything she says is very genuine and from the heart,” Anderson added. “She just tries to make us feel as loved as she can and just welcome in her classroom and court.”

Anderson said that since it’s their final high school year, they wanted to leave behind a special gift and memory.

“It’s our last year with her, so I think it’s kind of hitting us more,” she said. “And just the time that we have with her is running out. So we just wanted to do something big for her.”

It was during the basketball games where the words “Hearts for Zach” went around initially and inspired the idea of the T-shirts the seniors decided to make, White explained.

“We had little hearts that people could sign their name or like a prayer pin or like anything to him,” she said. “And they could also donate money. … We wanted to try to also make him feel as loved in the community as she is. Because he was always right by her side through everything.”

With the help of Prism Design & Embroidery in North Branch, the four students custom-designed the T-shirts they used to promote Stoltz’s heart procedure in Pine City and Rush City communities. The purchase of the T-shirts and donations were made available on a website for a week around Feb. 9, the students explained.

The link was also promoted on the Rush City and Pine City community Facebook pages, and the schools sent the same link to students, staff and others, Anderson said.

“So we had it on a bunch of different community pages,” she said. “And we also made fliers that went up with just basic information on where to find the link.”

Through all the promoting efforts of both communities and schools, the four students were able to sell approximately 218 shirts and raise about $3,143 for Stoltz.

Anderson said, “I’m really proud of both of our communities for stepping up.”

On March 17, Anderson, White and Carpenter presented the $3,143 check to Matzke-Stoltz during the lunch hour.

“It is very much appreciated,” she said to the students. “We love our community. … There’s a lot of people that are going through a lot of tough things right now. But for you guys to just open your hearts for us … and you’ve done it time and time again, it’s just, you can’t even put into words how much it means to us.

“Like this is beyond generous,” Matzke-Stoltz continued, adding that during their illnesses she and her husband couldn’t imagine not being able to teach anymore. “This is our calling, and for you guys to be so thoughtful to think of us in our time of need ... as young adults … this is going to take you so far in life.”