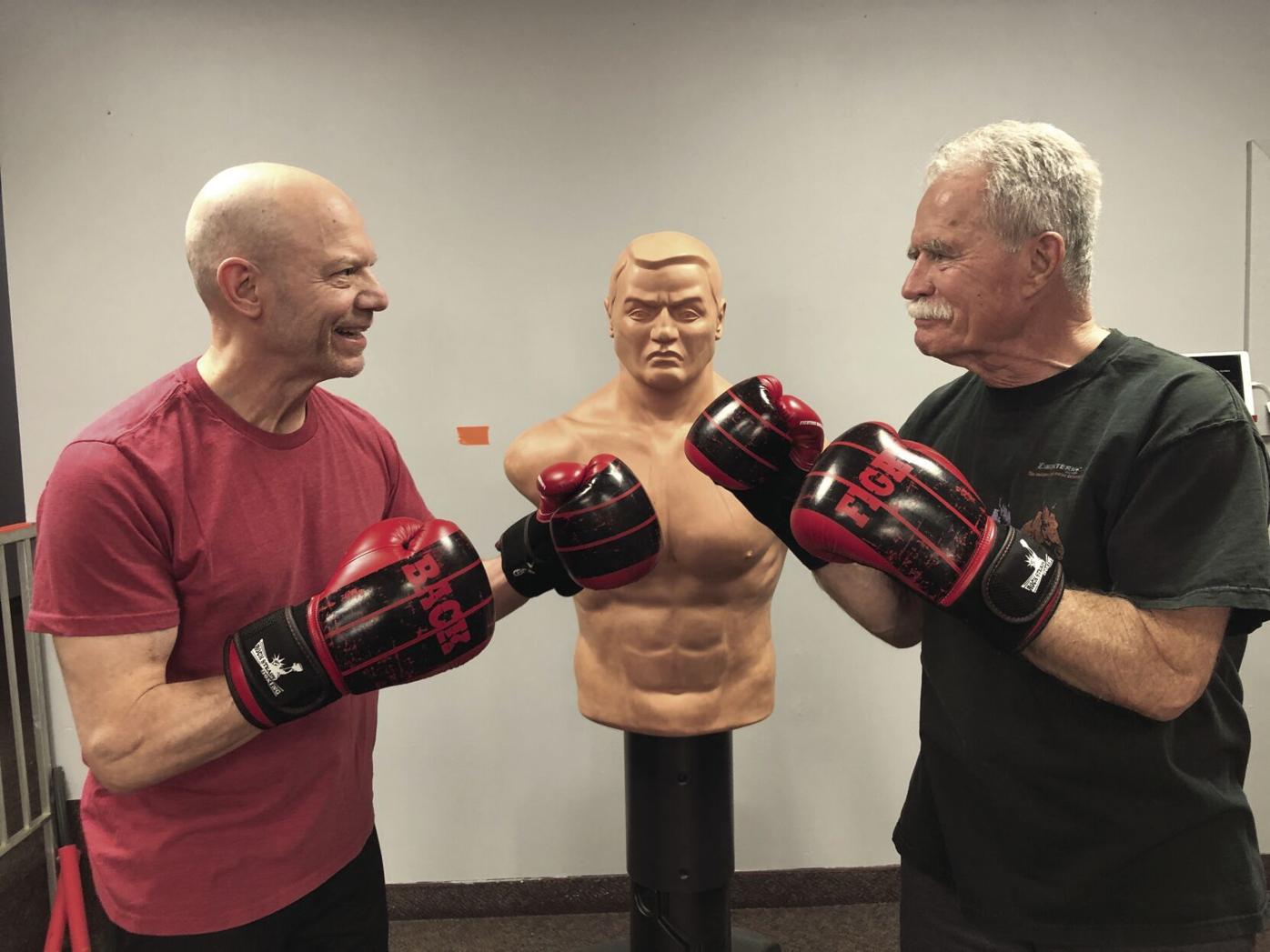 Gary Fulton of Princeton, and Don Block, who lives just south of Cambridge, are participants of Rock Steady Boxing Cambridge. The program’s non-contact boxing-style fitness has been helping Fulton and Block fight against their Parkinson’s disease and improve their quality of life and sense of efficacy and self-worth. 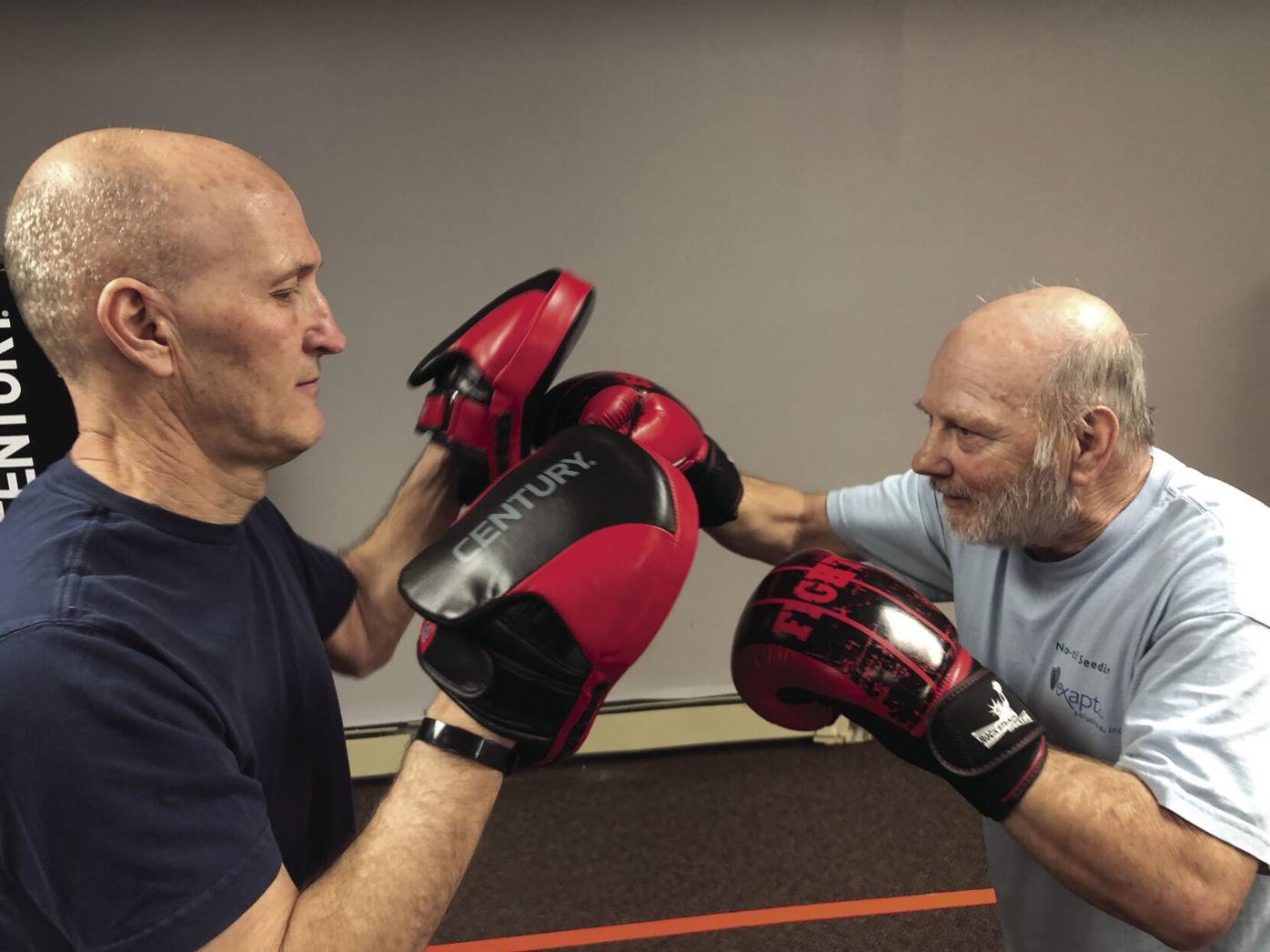 Gary Fulton of Princeton, and Don Block, who lives just south of Cambridge, are participants of Rock Steady Boxing Cambridge. The program’s non-contact boxing-style fitness has been helping Fulton and Block fight against their Parkinson’s disease and improve their quality of life and sense of efficacy and self-worth.

People with Parkinson’s disease can boost mental and physical resilience through a workout program offered by Rock Steady Boxing Cambridge.

Bohn seeks to serve nearby residents with Parkinson’s disease, which is a disease that causes tremors, movement disorders, cognitive impairment and more, by improving their quality of life through a non-contact boxing-based fitness curriculum.

Bohn used to own and operate a bike shop in the same building formerly called Outdoor Edge, which he closed in 2018. He recalled meeting a customer during his bike shop service, who had Parkinson’s disease. When the customer was riding a bike, Bohn noticed something that intrigued him.

“When I would put him on a bicycle, you wouldn’t know he had Parkinson’s,” he said.

Don Block has had Parkinson’s disease for about 10 years and he has been a regular member of Rock Steady Boxing Cambridge. He said that Bohn’s workout program has benefited him.

“What I like about it is I’m getting stronger,” Block said. “It helps develop hand-eye coordination and balance.”

Block has experienced a decline in maintaining his overall balance when standing or moving, he said.

“I have to concentrate or I can lose my balance and fall,” he explained. “My muscles have stiffened up my joints stiffen up. So (the workouts) helps get you loosened up.”

A few years ago Gary Fulton of Princeton also learned that his hands were shaking involuntarily. So he had it checked by a doctor and a University of Minnesota neurologist, he said. Eventually, he was diagnosed with Parkinson’s disease.

“Lack of dopamine in the brain,” Fulton said about his understanding of the disease. “Parkinson’s acts up anyway because the dopamine isn’t there to help the neurotransmitters with those signals, doesn’t know what to do with the adrenaline that the brain is producing.”

“I really like the program that (Bohn) puts together,” Fulton added. “It works on core strength. … (Bohn’s) got everything set up for guys with Parkinson’s for that reason. And boxing is a ton of fun. ... It hones your coordination.”

Bohn said he had just opened his workout program one week before the COVID-19 outbreak started to pose a threat to public health.

“So we got shut down, and then opened, and then closed,” he said adding that the number of members dropped from 10 to four over the year as a result.

Bohn said he wants people with Parkinson’s disease to consider joining his workout program, to gain the strength, coordination and movement they need.

“It’s just getting the word out,” Bohn said. “We’re looking for people with Parkinson’s. We’re looking for donations, like I said, we’re a nonprofit, so people can, if they were to give us money, then they can write it off their taxes.”

For Bohn, helping people with Parkinson’s is of utmost importance. The ideal number of members to keep Rock Steady Boxing Cambridge open is 20.

For more information about Box Steady Cambridge visit facebook.com/RSB-Cambridge-Boxing-for-Parkinsons-102833224561075. Or you can reach Bohn at cambridge@rsbaffiliate.com or by calling 763-221-6883.