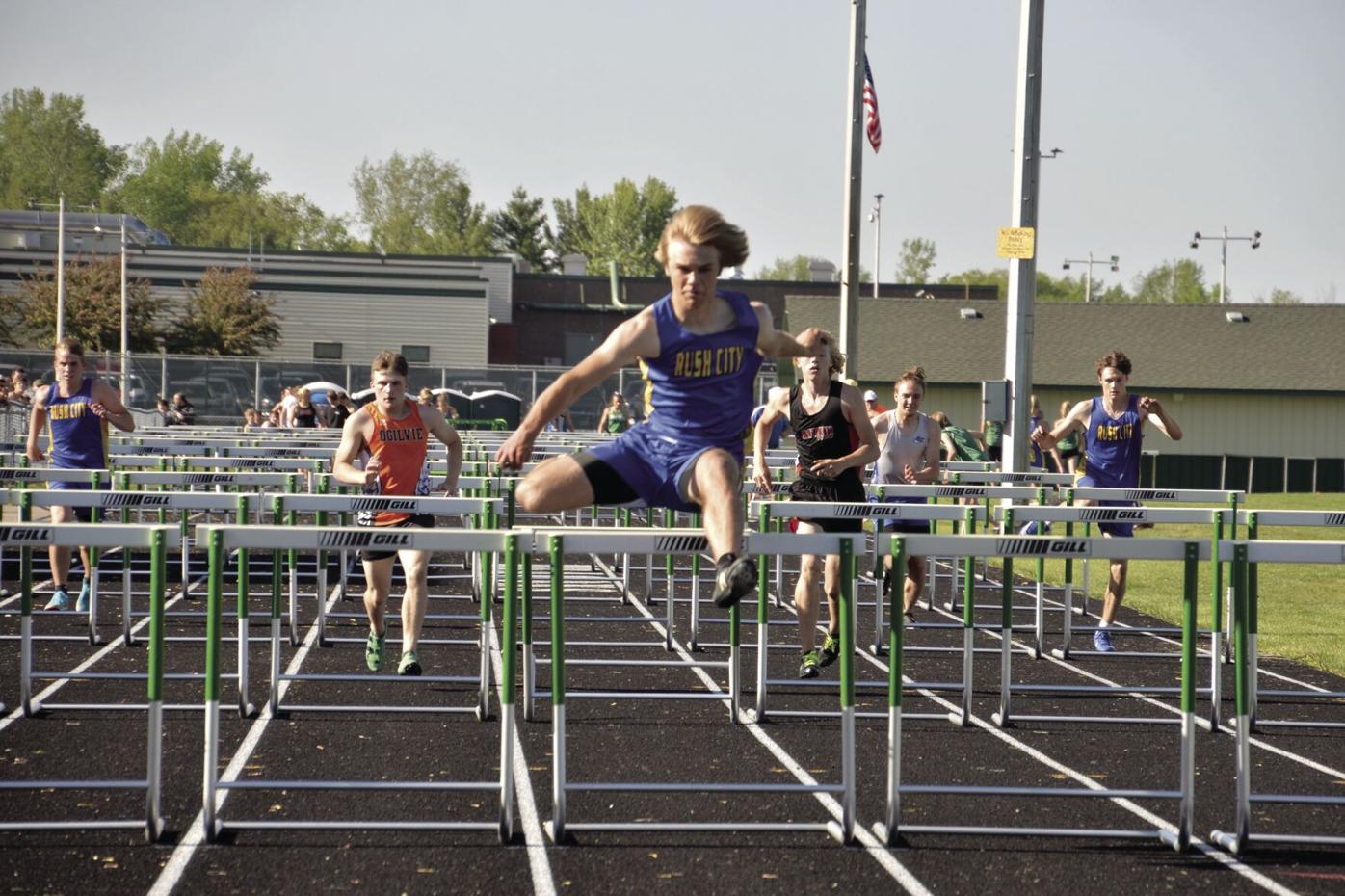 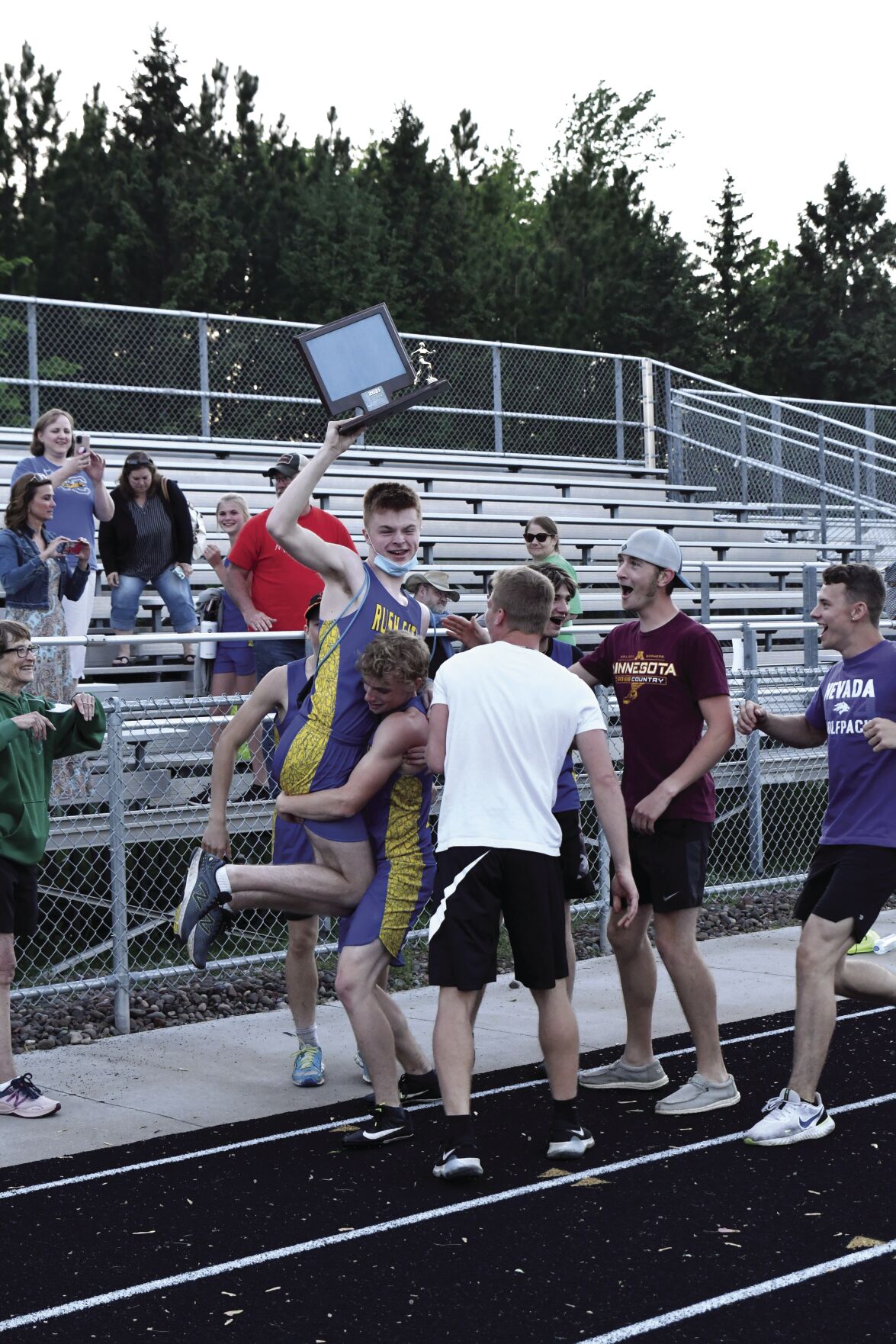 There was quite a celebration when the Rush City 4x400 relay team won, because it clinched the Great River Conference track title for the Tigers. 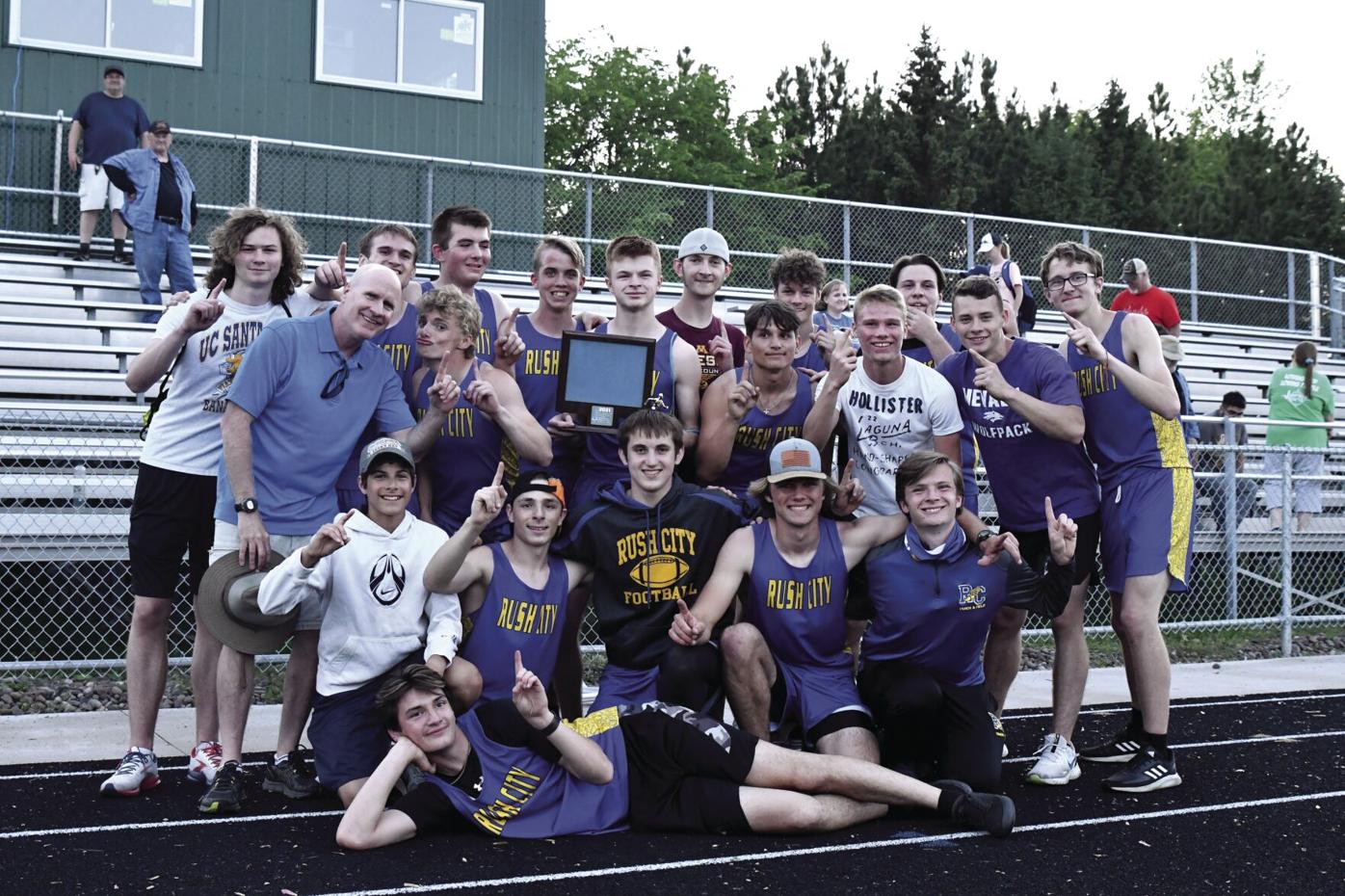 The Rush City boys track team poses with the team trophy after winning the Great River Conference track title on Tuesday, May 25. 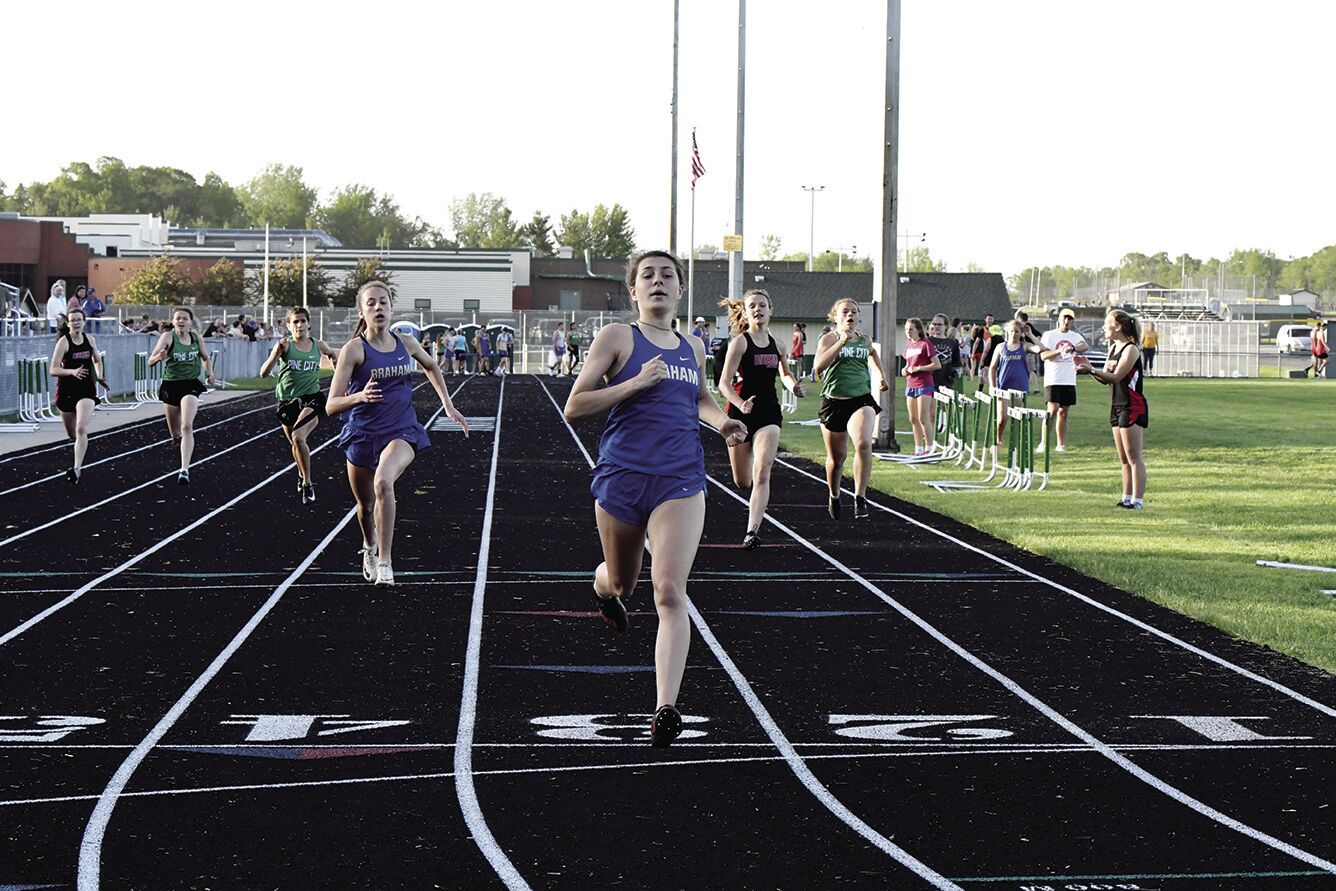 Braham senior standout Hannah Cornelius crosses the finish line to win the 400 at the Great River Conference track championships run at Pine City on Tuesday, May 25. Cornelius also won the 100 and 200 at the meet.

There was quite a celebration when the Rush City 4x400 relay team won, because it clinched the Great River Conference track title for the Tigers.

The Rush City boys track team poses with the team trophy after winning the Great River Conference track title on Tuesday, May 25.

Braham senior standout Hannah Cornelius crosses the finish line to win the 400 at the Great River Conference track championships run at Pine City on Tuesday, May 25. Cornelius also won the 100 and 200 at the meet.

The Rush City boys track team faced a number of tough opponents at the Great River Conference Championship hosted by Pine City on Tuesday, May 25.

The Tigers knew that Pine City had a solid team that would push for the title. But the Tigers also had to fight through a difficult season that saw them miss roughly two weeks of practice and competition because of COVID-19 protocols.

Rush City managed to overcome that adversity and outrun the competition to claim the GRC title with 204 points, eight more than the host school. And senior Mitch Mell said that title helped him and his teammates realize that fighting through hard times has its own rewards.

“Winning that championship allows me to look back and think, ‘Wow, this was a great season,’” he said. “If we hadn’t got the win, or if we had just had a lackluster performance at the league meet, it would be as if all of my years of high school track had built up to nothing.

Rush City track coach Mike Vaughan recognized the hardship his school’s athletes endured this year in a number of sports. Not only did the track team suffer through two weeks of quarantine, the football team was able to play just one game, and several other programs – including his cross country team last fall – also fought through difficult circumstances brought on by COVID-19.

“It takes the wind out of your sails, because you have to restart and get momentum,” Vaughan said of the quarantine. “But this group of seniors is one of the most positive groups I’ve ever seen. Is it because of the setbacks? Maybe. But they focus on what they can control. This is the best group, in terms of attitude, that I’ve ever had.

“I hope that one of the results of this COVID-19 era is our kids become more resilient, that they handle adversity better. And we’re seeing that from this group.”

Mell said the quarantine obviously made staying sharp physically a little more difficult, but it also took a mental toll on all of the Tigers.

“For me and a lot of the seniors, it was really hard to deal with,” he admitted. “The COVID-19 numbers were going up at that time, and it was really hard to keep a good attitude. We thought the spring of our senior year would be back to normal, and here we were getting quarantined again.”

Mell said he and his fellow seniors decided to use the quarantine as a reset for the team’s preparations for the remainder of the season.

“We talked about not messing around at practice, about really working hard and pushing ourselves,” he said. “COVID didn’t help us physically, but it may have helped us focus better.

“For some of the younger kids, they may have thought that the season was ruined. So we tried to help them see that they still had a chance to perform, and we could still do great things.”

And the Tigers used that focus to good effect at the league meet.

“He doesn’t get too worked up, too nervous, and he approached this competition very well,” Vaughan said of Anderson. “I’ve seen him start to gain speed while clearing the hurdles, which is what you want to see.”

Many of the Tigers’ other points came from a senior-laden roster. Seniors James Reichkitzer, Isaac Edrman and Mell took the top three spots in the pole vault, which Reichkitzer winning that event by clearing 10-0.

“Not only a lot of high finishes, but also a lot of PRs,” Vaughan said. “But we got a really solid performance from everybody. We knew what we had to do, and I thought everyone executed really well.”

Mell also finished second in the 300 behind Anderson and ran a leg on two winning relays. Another senior, Zeth Hahn, took third in the triple jump.

“We were so surprised by Zeth’s first jump, we thought they measured it wrong,” Vaughan admitted. “He popped 40-10.5, and his best before that was more than a foot less than that. He also got us points in the 100, and he ran the anchor leg in the 4x100 that won.”

But the meet remained close – so close that several “little” results played a big role in the outcome. For example, late in the meet Pine City took first in the 3,200, but junior Joseph Papke and senior Luke Widenstrom took second and third in that event to negate any advantage the Dragons might have gained.

That left the meet in the hands of the Tigers’ 4x400 relay, which included seniors Jacy Dominguez-Perrin, Mell and Timothy Thole along with Anderson running the third leg. The sophomore admitted he really wanted to win the event — and the meet — for this year’s seniors.

“It was terrible that they didn’t have a season last spring, and it didn’t help that we had to miss two weeks this season,” Anderson said of the seniors. “We knew it was their last year in track. The seniors told me, ‘Keep the pedal to the metal the whole time,’ so that’s what I did.”

What happened was a magical race and an unforgettable celebration.

“When I got [the baton] from Jacy, we were in the lead, and I kept us in the lead,” Mell said. “Our last two runners, Nolan and Tim, are amazing runners. And as each leg finished – with all of the teams in the infield cheering their relays on – it was just amazing.

“When Tim crossed the finish line, he hugged the starter. When I talked to Tim later, he said, ‘I couldn’t stand on my legs – I was too tired.’ So he hugged the starter for a whole minute. Then the whole team started hugging and cheering, and then we did a victory lap. It was awesome.”

It was a celebration the Rush City boys track team deserved for its perseverance and mettle.

“A lot of these seniors have been with me since the seventh grade, so we’ve been together six years,” Vaughan said. “It has been great to experience their formative years. They are a great group, and I will never forget them.”

On the girls side, Rush City also put together a strong effort but fell just short, placing third with 104 points, just three behind second-place Aitkin. Pine City won the meet with 198.5 points.

“We were second most of the meet, but at the end we just didn’t have enough athletes to fill the events,” Vaughan said. “We ran a great 4x400 relay, but it just wasn’t enough to make up the difference.”

Rush City dominated both of the hurdle events. Freshmen Lydia Bengtson and Cora Sayotovich finished 1-2 in the 100 hurdles, with Bengtson winning with a time of 17.57, while Sayotovich and senior Ashley Linberger took the top two spots in the 300 hurdles while Bengtson placed fifth.

Junior Alexis Ertz posted a pair of seconds, clearing 5-0 in the high jump while covering 31-2 in the triple jump.

Cornelius stars for Braham in

The Braham boys and girls teams could not win the numbers game at the Great River Conference track meet, finishing fifth on the girls side with 71.5 points while placing sixth in the boys meet with 39 points.

“We had a couple of top finishes, but we are limited in numbers, so we just don’t have enough to cover all the events of a track meet,” coach Amber Hoffman said of the girls team. “Currently, we have 11 girls who will fully compete in a meet; it’s really hard to compete against schools who have three times that many or more.

“On the boys side, we struggle with the exact same problem, but even more so. We have 10 boys who will compete but many of whom will not fill up events because of their age, including three seventh graders.”

“Almost every single Braham athlete had a personal record in their events on this day, and that is incredible,” Hoffman said. “We are having fun, we are confident, and we are eager for more. As a coach, I could not ask for a harder-working group than this one. They have been just amazing.”