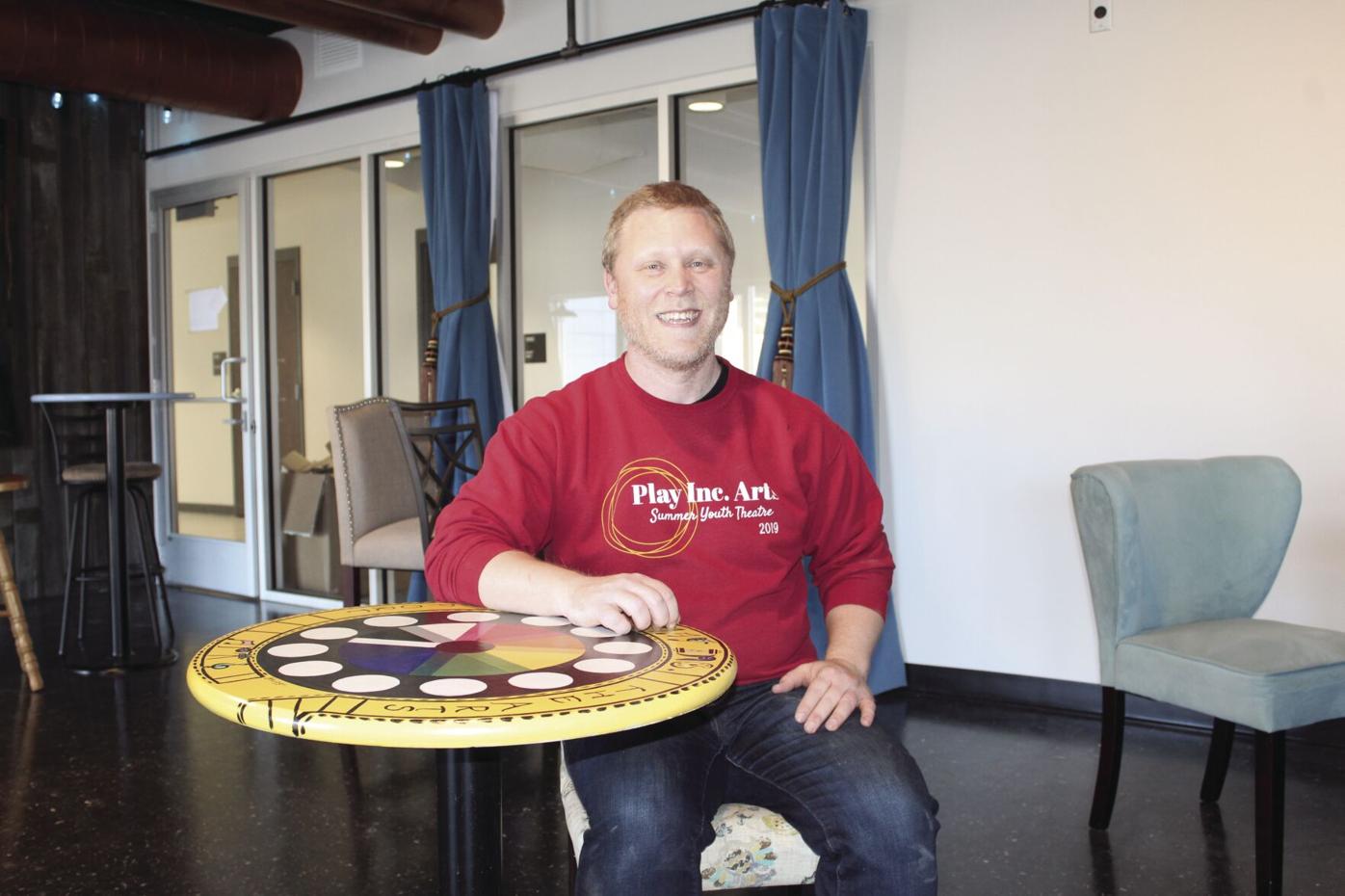 Play Inc Arts founder and president Aaron Knudsvig is excited to bring back live shows at the organization’s new location, inside the Cambridge Public Library. Photos by Rachel Kytonen 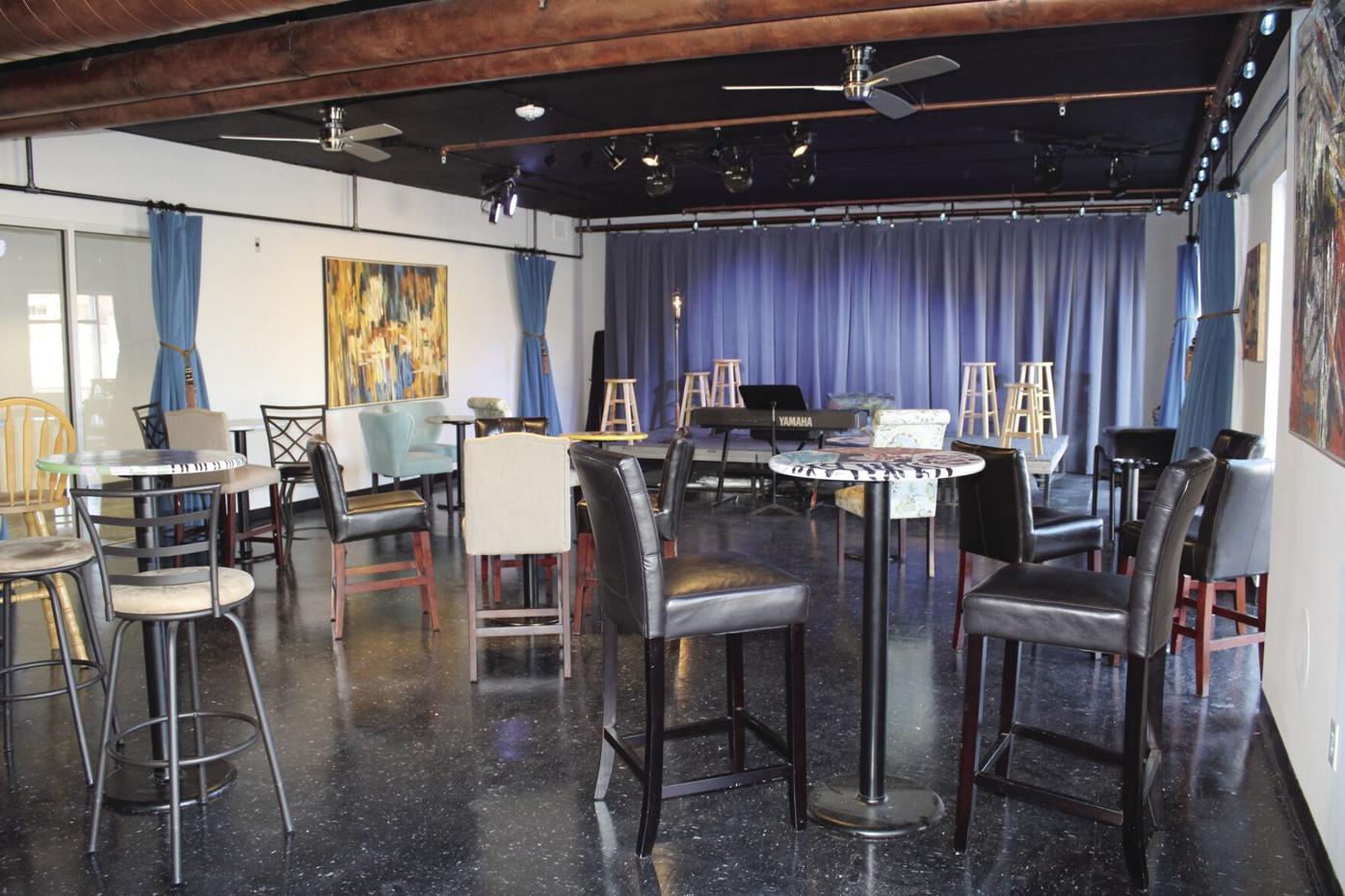 Play Inc Arts is now located inside the Cambridge Public Library, on the main floor, at 111 Dellwood St. N., Cambridge. 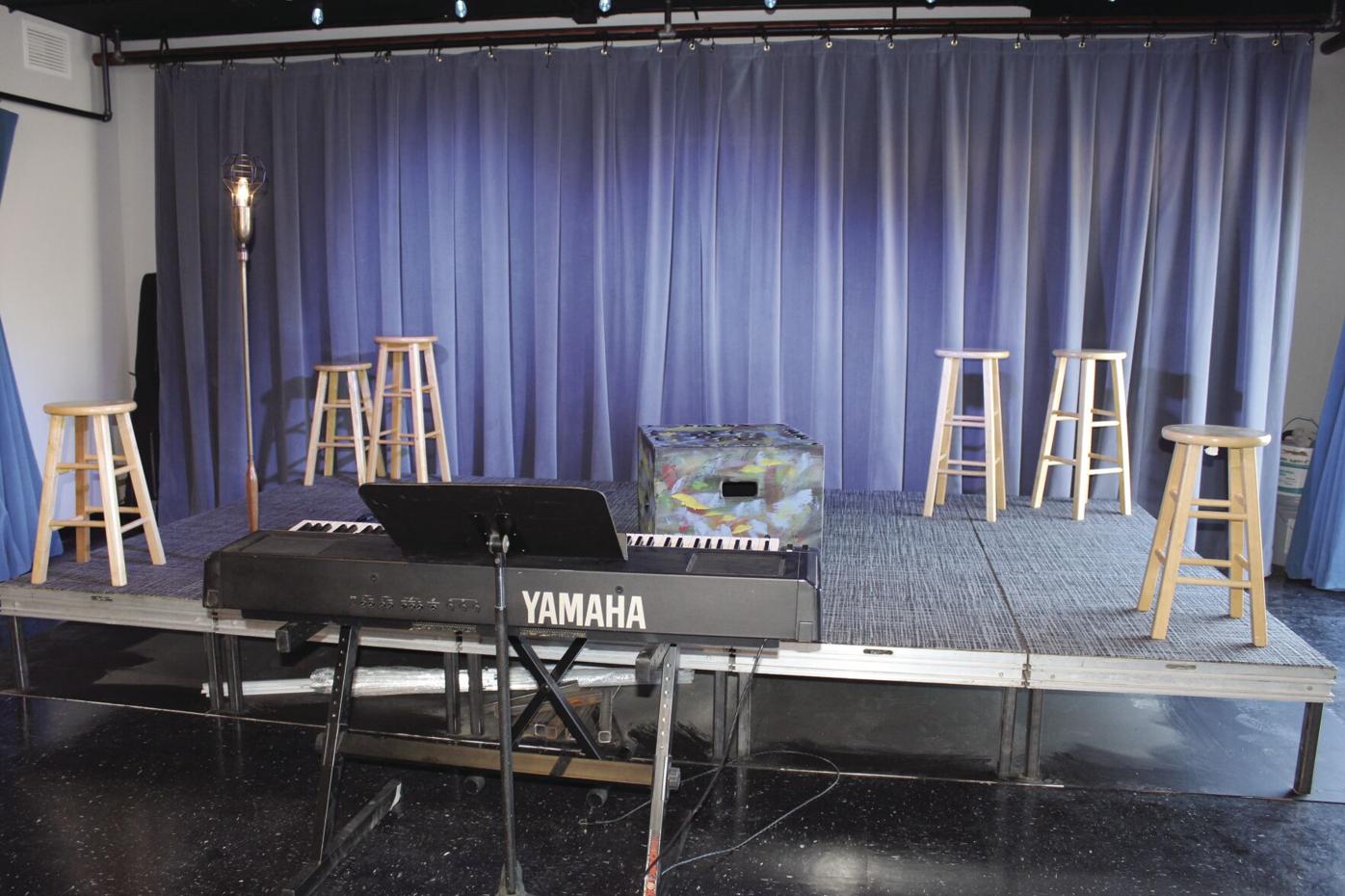 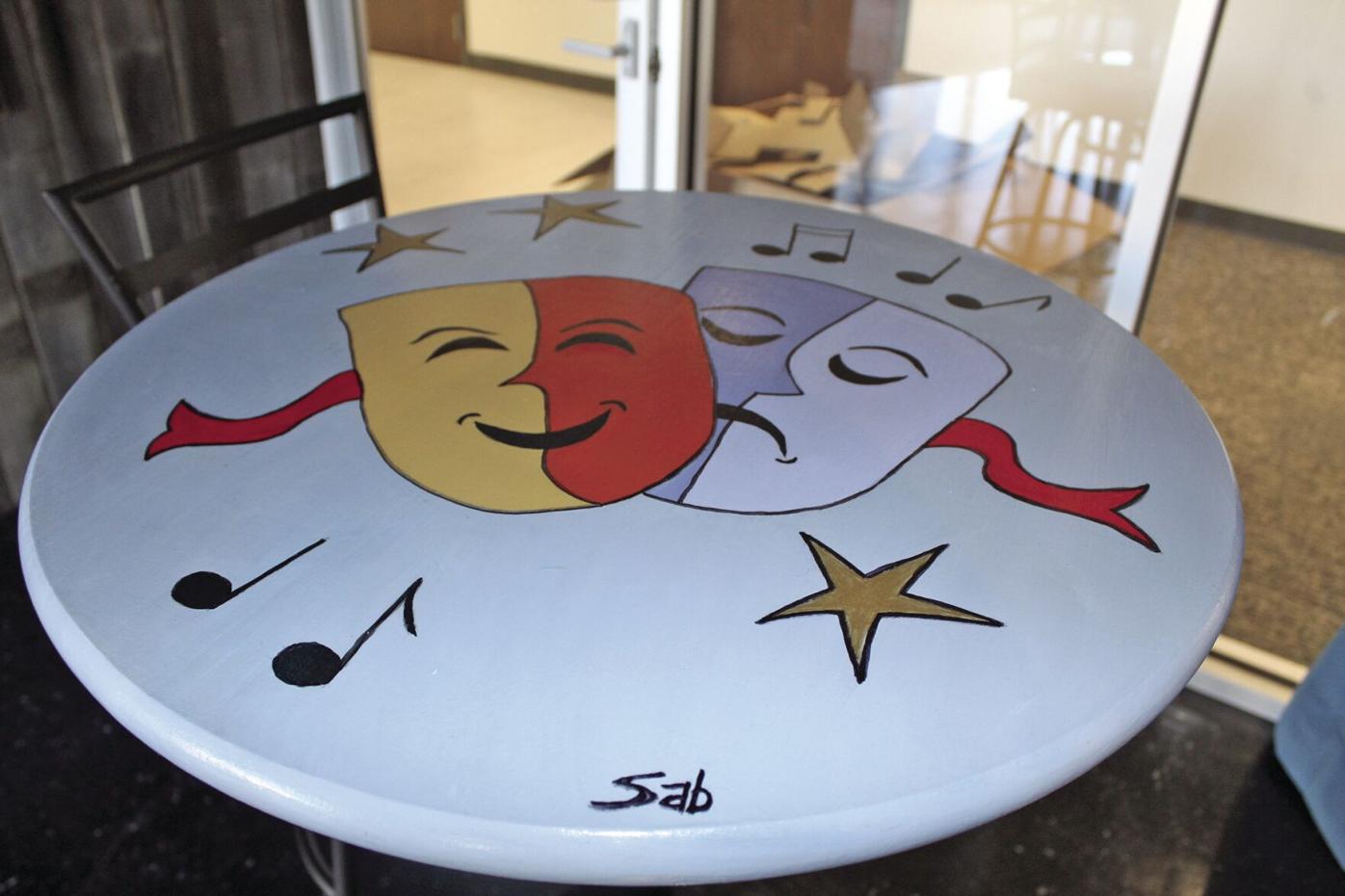 The following are pictures of the table tops designed by local artists who were the winners of a competition held by Play Inc Arts. 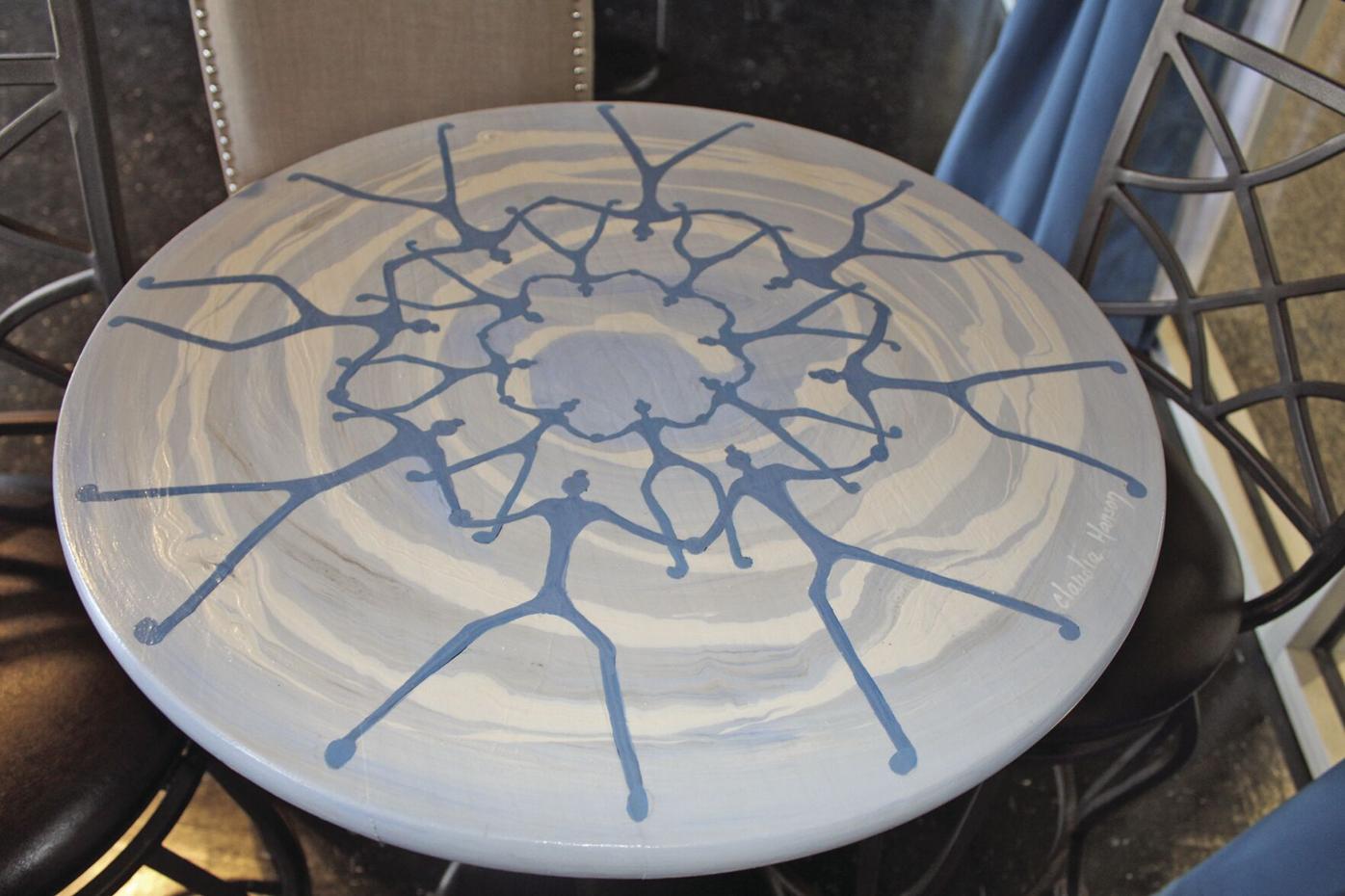 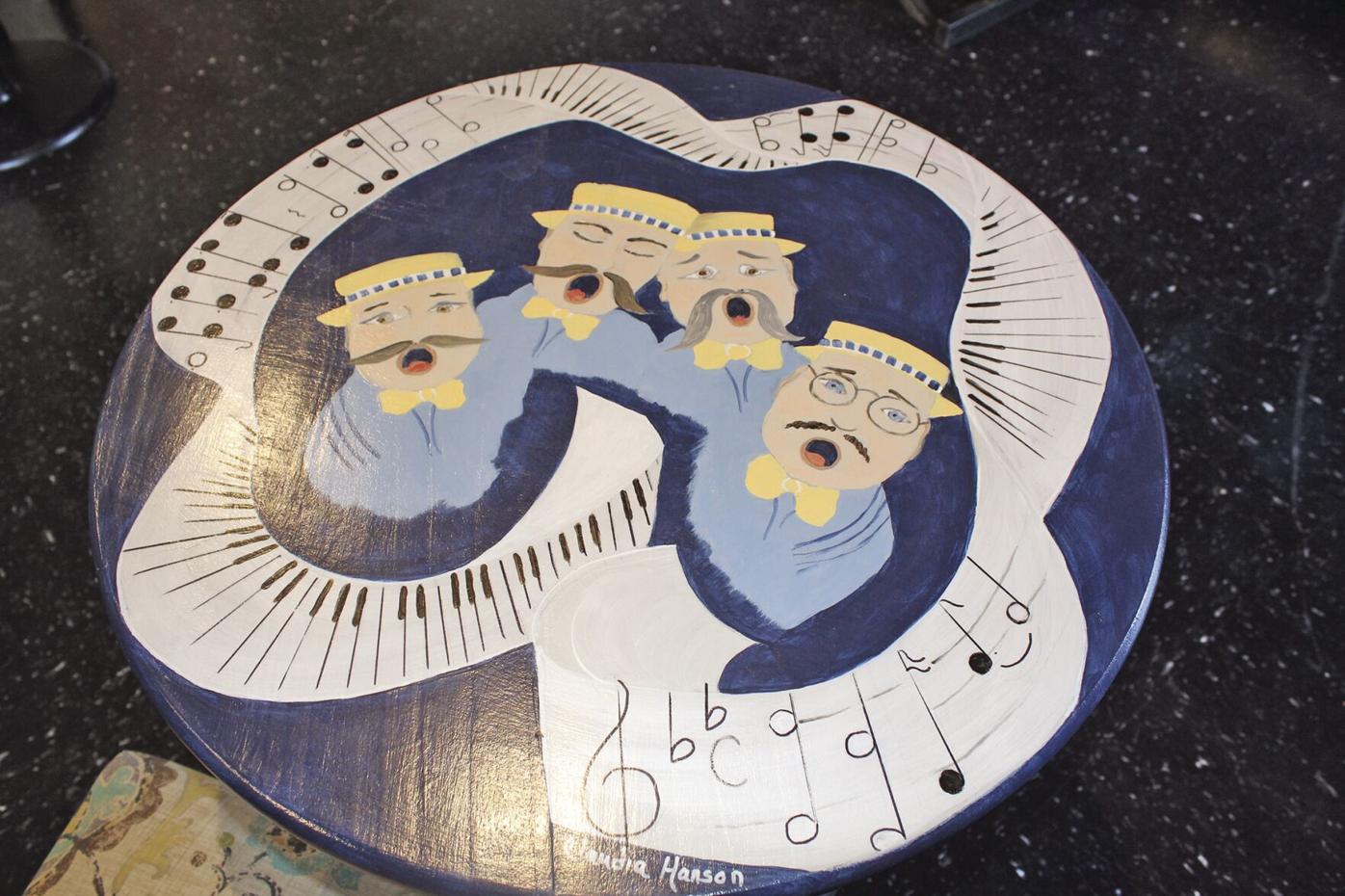 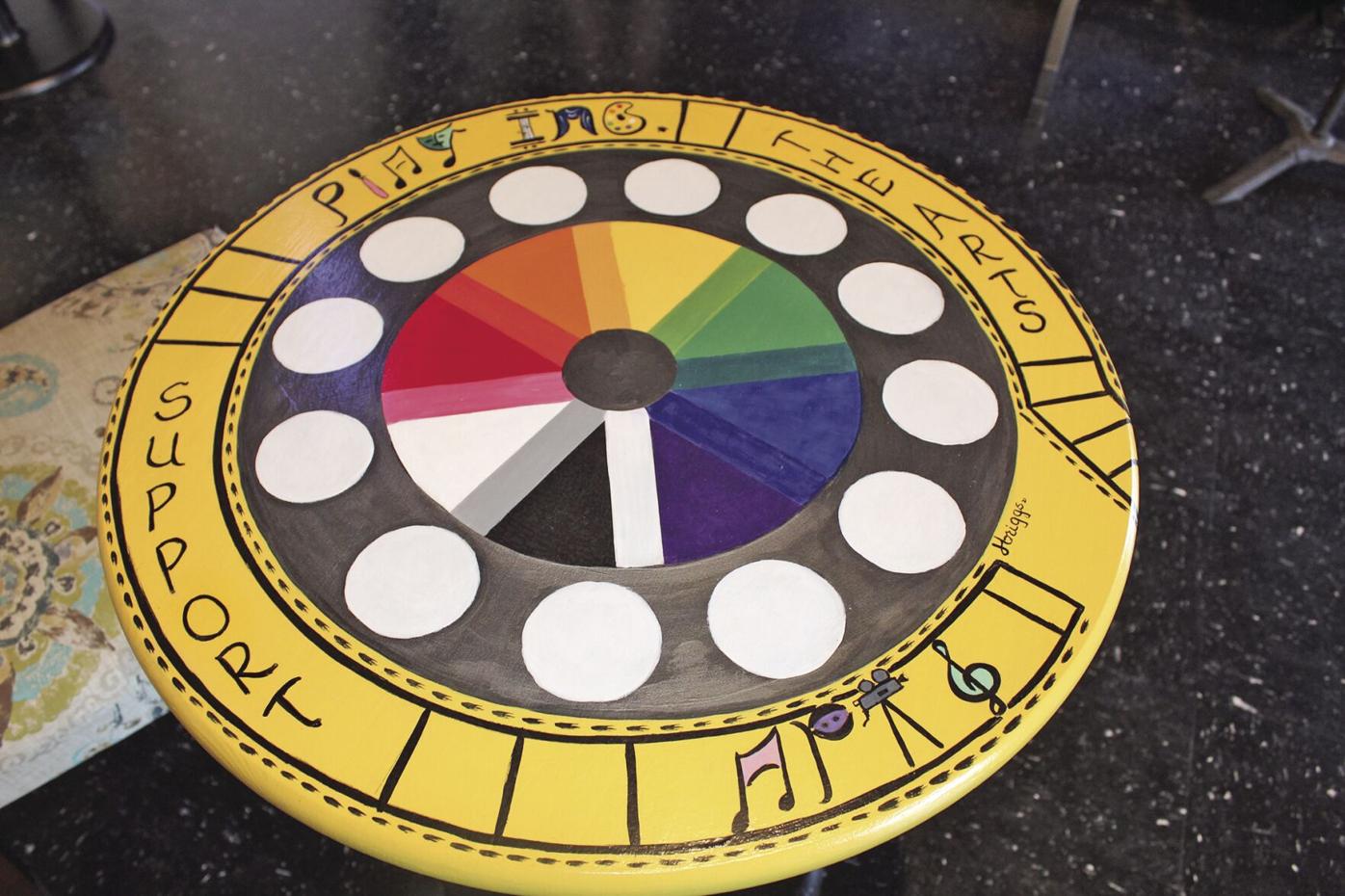 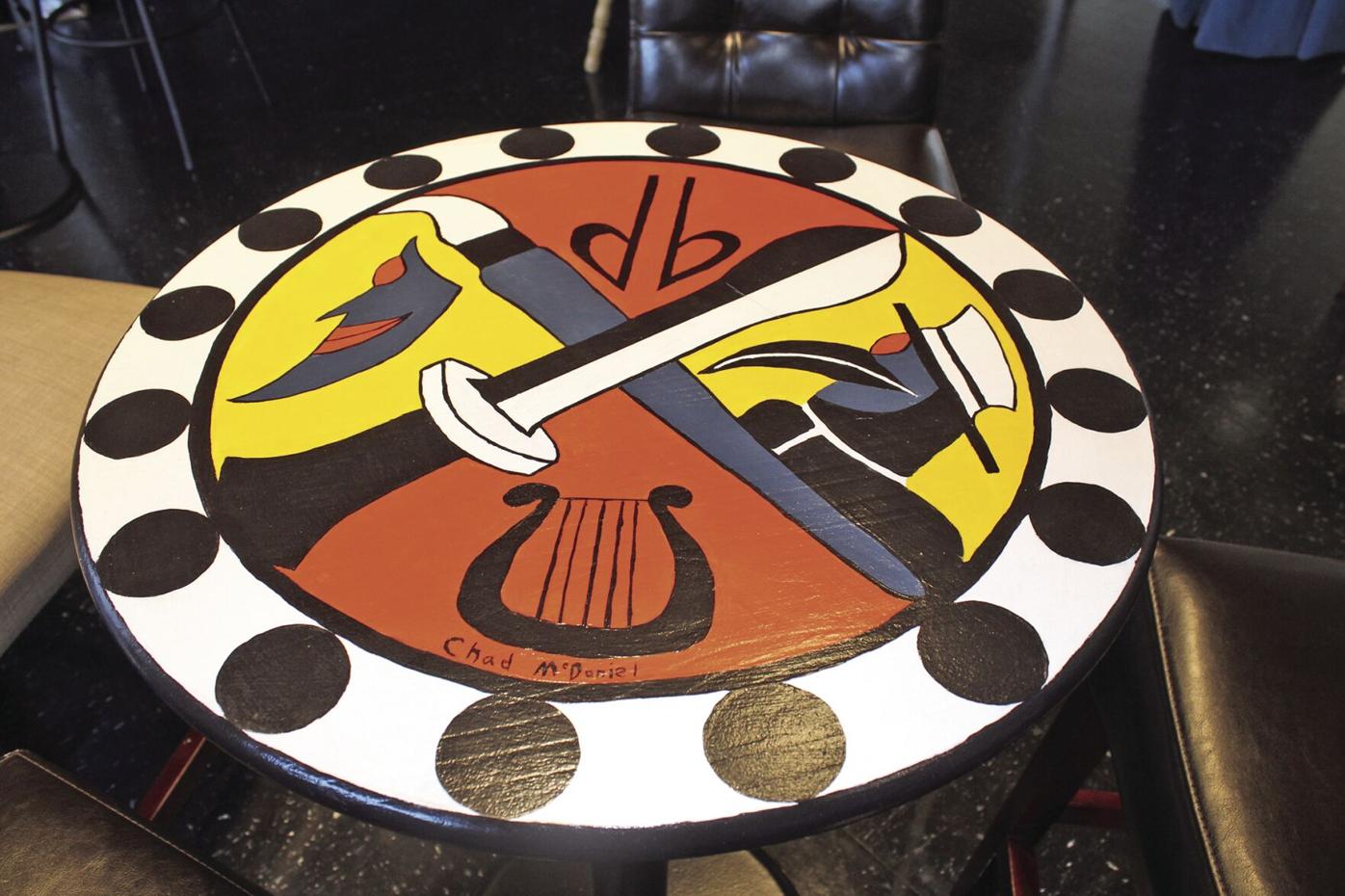 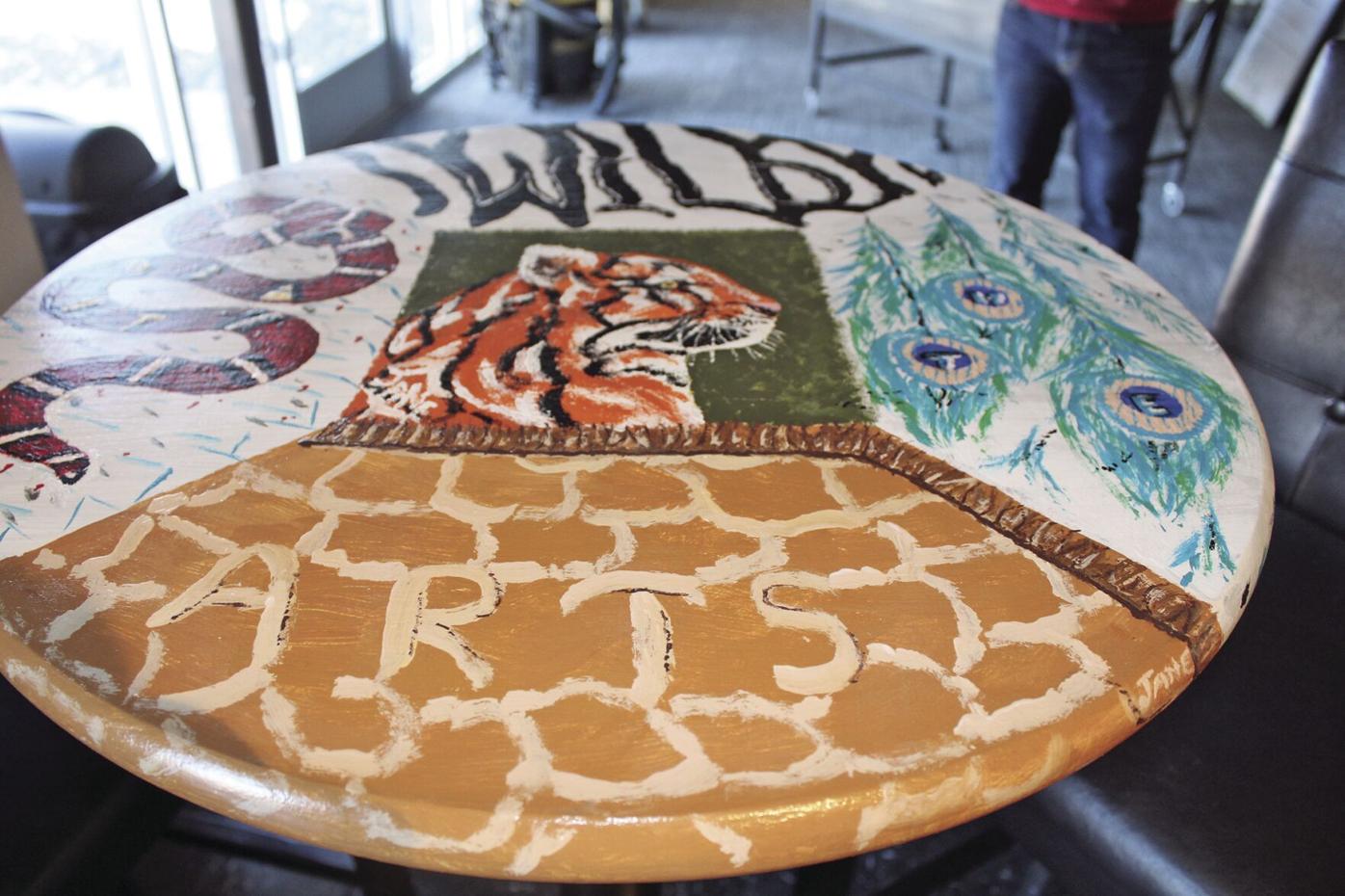 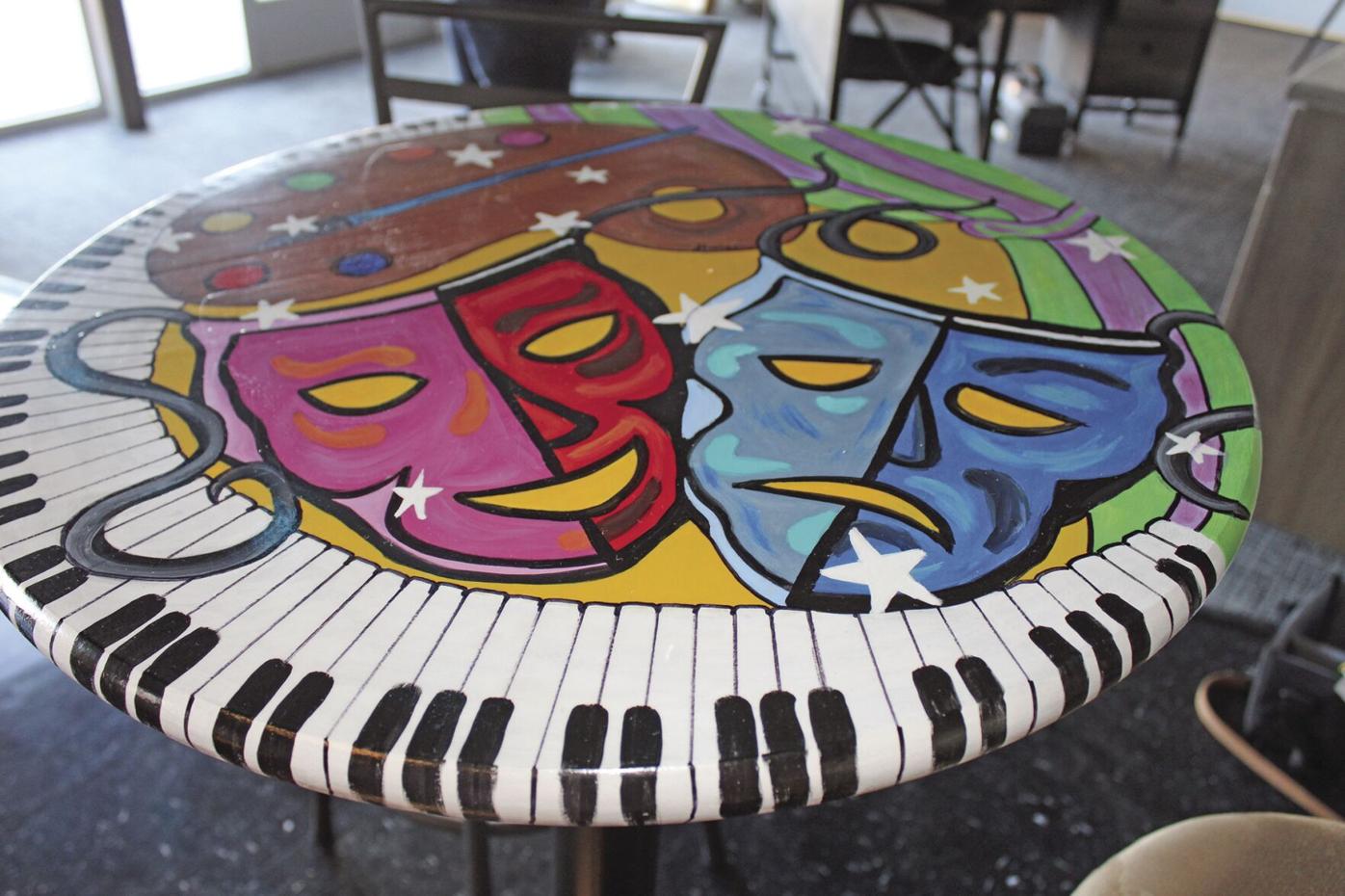 Play Inc Arts founder and president Aaron Knudsvig is excited to bring back live shows at the organization’s new location, inside the Cambridge Public Library. Photos by Rachel Kytonen

Play Inc Arts is now located inside the Cambridge Public Library, on the main floor, at 111 Dellwood St. N., Cambridge.

The following are pictures of the table tops designed by local artists who were the winners of a competition held by Play Inc Arts.

Live cabaret is coming back to Cambridge!

Play Inc Arts, a nonprofit organization based in Cambridge that provides musical, theater and visual arts opportunities for youth and adults in the area, is excited to bring back live shows.

Play Inc Arts founder and president Aaron Knudsvig explained the last live event Play Inc Arts offered was on March 8, 2020, just days before the COVID-19 shutdowns happened. He said over the summer, a couple of youth theater opportunities were held, but the shows were strictly livestreamed.

“One of our artists painted all of the pipework to look like copper and we had a contractor help us with the plumbing, electrical and flooring,” Knudsvig said. “Once we put the curtains up, it was not echoey anymore.”

Following COVID-19 restrictions and guidelines, Play Inc Arts will be offering four upcoming events to showcase its new location. Tickets to the shows will be sold online only, at playincarts.org, and will be sold per table, with no more then three people per table.

“The two Friday performances are the same troupe and that’s our Flagrant Foul improv, so kind of like ‘Whose Line Is It Anyway?’ All the skits are made up with suggestions from the audience. Other then getting suggestions I don’t think there’s any audience participation, so for people that are afraid of that, we’re not dragging anyone on stage,” Knudsvig said. “The Saturday night shows are singing concerts. ... Both singing nights, people who’ve come to see our stage plays are going to recognize our performers. It’s a lot of our singers that have been on stage the last few years. So there’s lots of solos in those nights and some songs where we’re singing together.”

Knudsvig said the performers are excited to be rehearsing again.

“We’ve had a couple of practices with the groups that are performing, our improv troupe, and then there’s a group of us guys that are singing as a quartet. It’s just been fun being in here rehearsing and doing what we’ve been missing for a year. You can see a little bit of normal coming back into our lives,” Knudsvig said. “It’s nice that we are able to do that and still follow all those guidelines and restrictions.”

“It’s been a rough year for so many organizations. For example, our summer youth theater, we usually make $3,000 to $4,000 that kind of funds the rest of our year. We sell usually about 1,200 tickets; we sold 150 tickets last summer. And our costs weren’t substantially less. We trimmed where we could, we didn’t have extravagant costumes, we weren’t in the Performing Arts Center, so that helped with costs, but we still took a big hit on that. And then not having our adult show, that usually funds the rest of our year with rent. So we’re kind of driving on fumes at the moment.

“We’re hopeful this summer gets back to our regular schedule, and I like to hear the seating capacity is back up to 250, so that gets us back into the Performing Arts Center. We are certainly in need of any kind of support that’s out there. Whether they are able to come and see the shows or donate to us as an organization. Of course I’m biased, but I feel the arts is an essential to our community, and we’ve got a great platform right now to do both performing and visual arts. And we’re hopeful to expand, but some of that will take more people involved.”

While getting the new location ready, Knudsvig explained Play Inc Arts held a competition for artists to decorate the table tops of the round tables to be located in the room.

“We picked the 10 top submissions and then we gave them their table tops and they painted them,” Knudsvig said. “I would like to see that be a every-so-often we do that again. And sell the tables or whatever and have another contest. We have a big variety. Arts was sort of the theme, so we have a music one, a costumey one, some are more just arty painting types. And then there is one table that they all contributed too.

“So the tables will last a couple years, and then do another round. And so that’s always changing the art in here, and as we grow, we can get more artists involved,” Knudsvig added.

Paintings from the Elof Wedin collection are displayed on the walls at Play Inc Arts’ new location. Knudsvig explained when Cambridge Center for the Arts closed their operations, Play Inc Arts was gifted the 200-plus collection. The paintings that aren’t displayed at Play Inc Arts or in other locations in Cambridge are being kept in storage rooms on the lower level of the library.

Knudsvig said the library folks have been very easy to work with.

“The library has been wonderful,” Knudsvig said. “They’re excited to have us here and they’ve been fielding a lot of questions from people going ‘when is that place going to do something other than be a cement box?’ They’ve just been really great.”

Much thanks is being given to the volunteers who helped move Play Inc Arts from its previous location on Second Avenue Southeast in Cambridge.

“We had tons of volunteer help; there’s no way we could have done it without the volunteers,” Knudsvig said. “We painted all the walls and ceilings right away, and we got Todd Lind Construction involved at the end of October, early November, and it’s just been sort of a slow process since.

“Jodie Briggs (Play Inc Arts business manager) and I have been in here every Saturday and Sunday for the last probably three or four weeks, several hours cleaning and putting in shelves and building the desk and chairs and installing the television. Doing all that stuff and putting up the stage lights, hanging the curtains, but it’s been fun and it’s really coming together. I know everyone that’s been involved in it is excited to have people in here. And at some point, we will get more tables in here and have more tighter seating, but for right now it’s about perfect for the 6-foot spacing, and we’re still under the capacity rules. We have seating for 33 right now, so that’s three at a table. We may go four to a table at some point, but for all of our upcoming events we’re selling them as tables so they know who they’re sitting with,” Knudsvig added.

Knudsvig and his wife, Sarah, were the two primary founding members of Play Inc Community Theater in 2005 with the intent of building a summer youth theater program. Play Inc offered musical productions for both high school and middle school students as well as age-appropriate productions for elementary students. During 2011-2012, Play Inc began producing shows to draw in adults. In 2017, Play Inc became Play Inc Arts, and besides continuing to offer musical and theater opportunities for youth and adults, the organization started offering visual arts opportunities.

Even though Knudsvig is a busy man and has three children with Sarah, he prioritizes time for Play Inc Arts, since it’s something he’s very passionate about.

“It’s working with the people in the shows. One of the things I love about our adults program is after our rehearsals — we usually rehearse Thursday, Friday, Saturday and sometimes Sunday — Friday nights we usually have half or more of the cast go out to the restaurants here in town,” Knudsvig said. “But we go out together and we just socialize after working on it. So it is really about getting to work with people and socialize. That’s not always easy to find as an adult. We have so much fun. That’s energizing.”