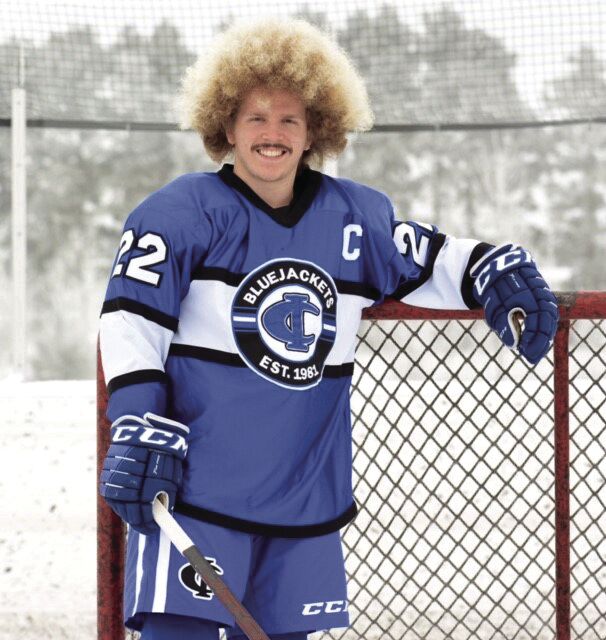 This photo of Easton Parnell, taken before the season began, caused a reaction around the state as high school hockey fans admired the senior’s hair. 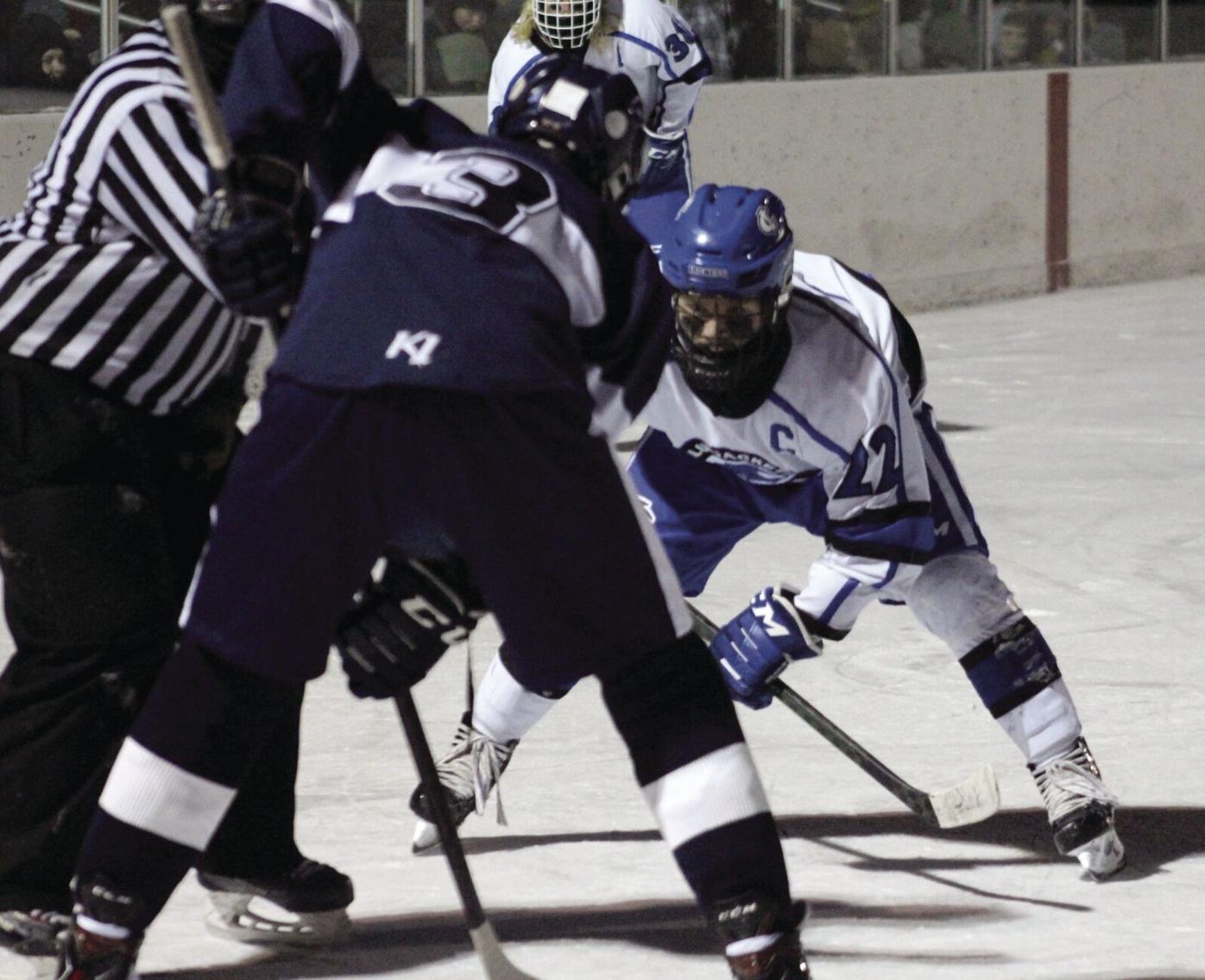 Easton Parnell prepares to take a face off in Cambridge-Isanti’s contest against St. Francis played at Central Green on Thursday, Jan. 28.  Photo by John Wagner 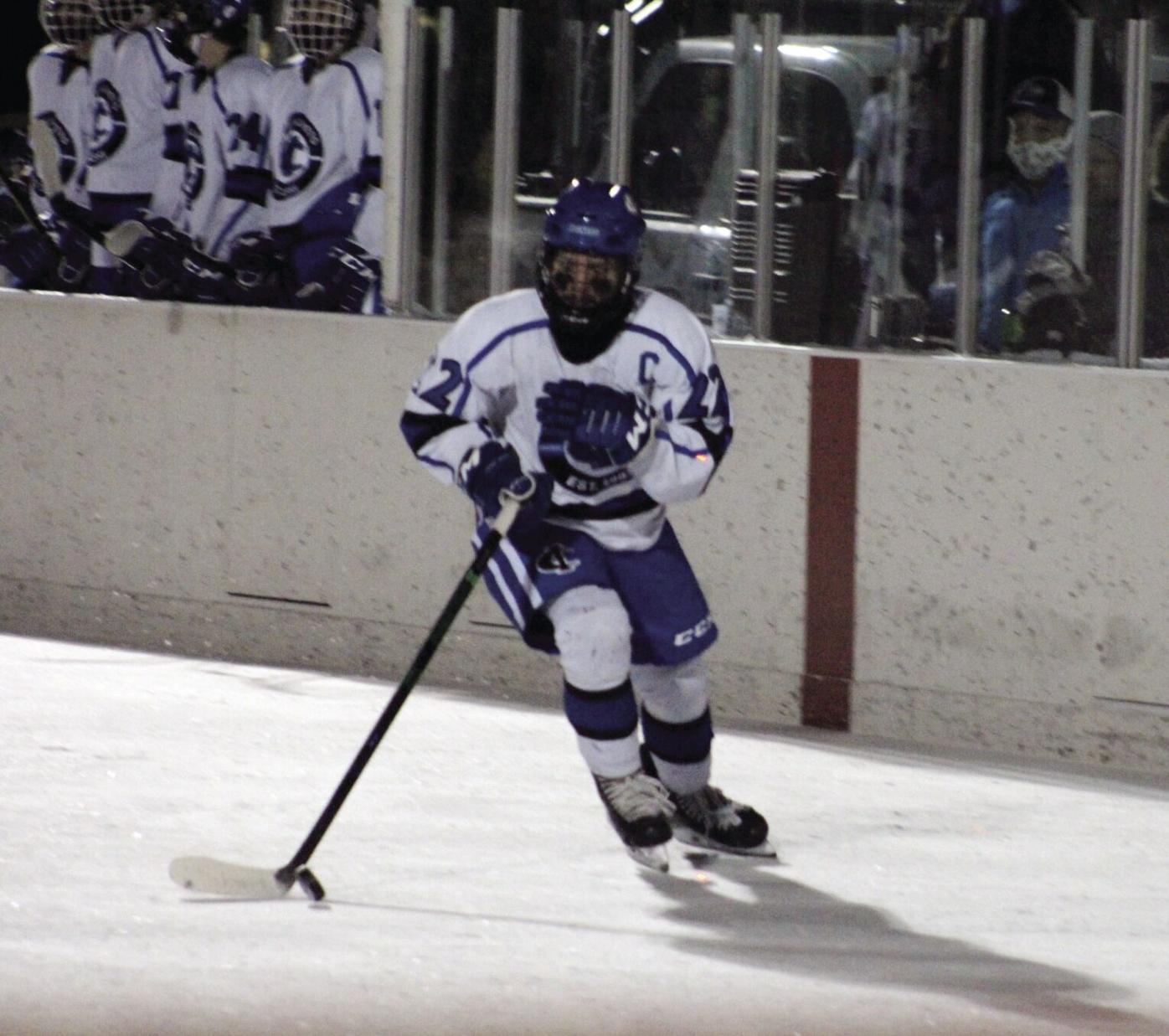 Parnell has scored a pair of goals and led the Bluejackets to a 4-1 start to the season. He began this year taking regular shifts with the Rum River Mallards of the USPHL and scored six goals in 18 games. Photo by John Wagner

This photo of Easton Parnell, taken before the season began, caused a reaction around the state as high school hockey fans admired the senior’s hair.

Easton Parnell prepares to take a face off in Cambridge-Isanti’s contest against St. Francis played at Central Green on Thursday, Jan. 28.  Photo by John Wagner

Parnell has scored a pair of goals and led the Bluejackets to a 4-1 start to the season. He began this year taking regular shifts with the Rum River Mallards of the USPHL and scored six goals in 18 games. Photo by John Wagner

The first thing you notice about Cambridge-Isanti boys hockey player Easton Parnell is his hair.

“I guess it’s a mop,” Parnell said. “I have thick hair and really curly hair, and that’s not a good mix. I’ve never had tame hair.”

When his helmet is off, the senior’s tresses are impossible to ignore. It’s a wild, tangled afro that’s equal parts tumbleweed and Brillo pad. In the hockey world, it’s known as “flow” or “lettuce” – and let’s just say that Parnell’s dome is a garden flowing with lettuce.

“That’s one luscious mane,” said his coach, Jarad Ziebarth, with a laugh. “It’s like a lion’s mane.”

Before this season began, Parnell’s locks garnered some notoriety as social media celebrated his flow. But hockey fans around the state should know there is more to the Bluejacket forward than his hair, as he ranks among the leading scorers for a team off to a 4-1 start.

“Every time he hits the ice, I have no doubt he’s going to give us 100 percent,” Ziebarth said of Parnell. “His work ethic is incredible. His acceleration and speed on the ice are also impressive. His ability to make something happen on the ice is important to us.

“And he’s been a captain for our program since he was a sophomore. He’s a leader who’s happy to grab his lunch pail and go to work.”

Parnell, who has played hockey since he was 3 years old, earned minutes on the Cambridge-Isanti varsity’s top line as a freshman, and by his sophomore year he was a team captain. But that was a mixed blessing, because the Bluejackets at that time were extremely young – and took a beating from older, more experienced opponents.

“We took our lumps from just about everyone,” Parnell admitted. “It’s tough, but we knew that, if we stuck it out, we would have a strong team this year. We knew that there would be a light at the end of the tunnel.

“We knew, when we were growing up, that we had solid teams. But when we got to the varsity as sophomores and didn’t have a ton of upperclassmen to help you, it was tough. We have paid [the price] for this season.”

Ziebarth said Parnell and the nine other seniors on the varsity roster deserve praise for their perseverance during those lean years.

“Credit to these guys, because they have been faced with a lot of obstacles,” Ziebarth said. “Easton and the other seniors on this team deserve all the credit for keeping the program afloat. Their dedication and sacrifice means they deserve the rewards they are getting this season.”

Parnell said he takes his responsibilities as a team captain seriously.

“I just try to keep everyone focused – keep their eyes on the prize,” he said. “You have to keep a level head. I know that everything I do, the underclassmen are watching, so I try to lead with my actions as much as with words.”

With the uncertainty of high school sports looming last fall, Parnell skated with the Rum River Mallards, the U.S. Premier Hockey League team based in Isanti, and tallied six goals and an assist in 18 games.

“I skated with them in the summer, and at that time we kept hearing that our season would be pushed back,” Parnell said. “So I figured it would be in my best interest to play a few games with them to get ready for the high school season.”

When the Minnesota State High School League announced the hockey season would start in mid-January, Parnell and his Cambridge-Isanti teammates were ready. Parnell scored two goals and added three assists as the Bluejackets rebounded from a season-opening 2-1 loss to Becker/Big Lake by whipping their next four opponents by a combined margin of 18-9.

What Parnell was not prepared for was the reaction to his hair.

“I definitely didn’t expect it,” Parnell said of the attention. “I was getting random texts from people I don’t even talk to, and that was kind of funny. My twin sister, Ashton, and my older sister Riley give me a lot of grief, but I think they’re a little jealous.”

Parnell said he has a specific care regimen for his flowing locks.

“Contrary to popular belief, I don’t brush my hair out because it’s so hard to get the knots out – and it gets knotted really easily,” he said. “I use shampoo and a lot of conditioner. And if there’s a special occasion, I’ll brush it out to get it a little more ‘poofy.’ If there’s something going on, I might gel it, but usually I let it sit. But that takes 10 minutes of hard brushing.”

With a wink, Parnell gives the credit for his hair to his parents, Clint and Shontel. But he was serious when he thanked his parents for their support of his hockey career.

“Hockey is not a cheap sport, and it’s not easy to do because you trek all over the place going to practice and games,” Easton Parnell said. “So I thank them for everything they’ve done for me, and I thank all of the coaches I’ve had along the way.”

That thanks includes his current coach at Cambridge-Isanti, Ziebarth, who said the notoriety Parnell has received for his hair is a sign of the changing times.

“Growing up, my teammates and I cut our hair short,” Ziebarth said. “But you have to change with the times or you won’t make it in coaching. You can drive yourself bonkers worrying about stuff like hair.

“Minnesota hockey hair has become a phenomenon. It’s almost like a badge of honor to have hair flowing out of the earholes and the back of the helmet. For me, if it’s not disrespectful to the game of hockey, why not?”

The Cambridge-Isanti boys hockey team knocked off St. Francis 3-1 in a contest played on the outdoor rink at Central Green on Thursday, Jan. 28, then blitzed Mora/Milaca 7-2 two days later.

The Bluejackets scored a goal in each period against St. Francis, as Jacob Ziebarth found the back of the net in the first, Parnell scored just 33 seconds into the second, and Luke Pierson added an insurance goal in the third. Bobby Hendricks stopped all but one of the 28 shots he faced to claim the victory.

C-I scored three goals in each of the first two periods to cruise to the win at Mora/Milaca. Jacob Ziebarth had a hat trick and added two assists to lead the offense, while Hendricks finished with 13 saves in net.