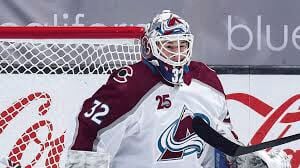 Hunter Miska has played in two games for the Avalanche this season, including a start against the Minnesota Wild at the Xcel Energy Center on Sunday, Jan. 31. Photo courtesy Colorado Avalanche 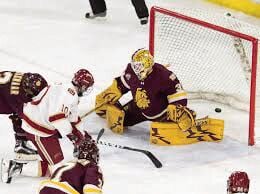 Hunter Miska posted a 27-5-5 record and 2.20 goals-against average in leading Minnesota-Duluth to the NCAA Championship game as a freshman in 2017. Photo courtesy Minnesota-Duluth 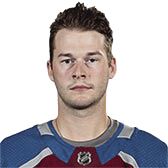 Hunter Miska has played in two games for the Avalanche this season, including a start against the Minnesota Wild at the Xcel Energy Center on Sunday, Jan. 31. Photo courtesy Colorado Avalanche

Hunter Miska posted a 27-5-5 record and 2.20 goals-against average in leading Minnesota-Duluth to the NCAA Championship game as a freshman in 2017. Photo courtesy Minnesota-Duluth

For Hunter Miska, it was a dream come true.

The North Branch native was standing on the ice of the Xcel Energy Center, and the public address announcer introduced him as the starting goaltender. Not only was he starting in goal in an NHL contest, he was starting in goal at the Xcel Center, the home of the Minnesota Wild squad he spent his childhood cheering.

Well, the dream was almost perfect: Miska was wearing the sweater of the Colorado Avalanche, not the Wild.

“I always imagined myself in a [Wild] jersey, so to get a start in the Xcel Center, playing against my childhood idols was a dream,” Miska said of his Jan. 31 start. “I’m happy with the jersey I’m wearing, to be sure. But that was quite an experience.”

Miska and his father, Todd, made many trips down Interstate 35 to the Xcel Center to watch the Wild play when Hunter was young. But Hunter Miska’s route to the Xcel Center for his second career NHL start had as many twists as turns as that contest itself.

Wild forward Nick Bjugstad took a pass off the end wall and tried to shove the puck past Miska, who held firm. Off the ensuing faceoff, the puck quickly found the stick of Minnesota’s Kirill Kaprizov, who zipped the puck at Miska, only to see Miska calmly kick it aside.

Miska started in goal for North Branch as a freshman and sophomore before getting the opportunity of a lifetime: A chance to play for USA Hockey’s National Team Development Program.

“I wasn’t expecting to make the team, because I felt there had been goalies my age who had been playing the position for a lot longer time,” he admitted. “But I had a passion for the game, and I worked hard every day to improve my game. So when I made the team, I felt I had to take advantage of the opportunity.”

There were some bumps on the ice in those two seasons, but Miska said those two years living in Ann Arbor, Michigan, helped him grow up.

“I was away from home for the first time in my life, and I lost all my friends from North Branch,” he said. “It wasn’t easy to transition from one high school to another. I struggled at times while I was there, but I thought that was good for me: You need to go through some struggles, and fight through some adversity, and make some sacrifices.”

Miska then played for the Penticton Vees in the British Columbia Hockey League for two seasons. In 2014-15, his second season there, he posted a 32-9 record and 1.88 goals-against average to lead the Vees to the league title. The following year he went 32-13-1 with a 2.46 GAA for Dubuque in the United States Hockey League.

“I was a little nervous [going to Penticton], because it was a very ‘offense-minded’ league up there,” Miska admitted. “But I had two really good seasons up there, and I won a lot of cool trophies and awards.

“I wanted to prove I could handle the USHL, so I played for Dubuque for a year and had a good year there, too. And I was named USHL Goalie of the Year, so I felt I had a pretty good run in juniors.”

Miska then had a fabulous season in goal for Minnesota-Duluth, leading the Bulldogs to the NCAA Championship game in 2017. The 6-foot-1, 175-pounder had a sparkling 27-5-5 record and 2.20 goals-against average.

“That was an unreal year,” Miska said. “We had a good team on paper, and a lot of those guys are playing in the NHL now. … UMD is a hard-working team that earns everything it gets, and that team worked hard every day and earned everything it got.”

After that season, Miska signed a two-way contract with the Arizona Coyotes of the NHL.

“I thought it was a pretty easy decision, because I had a decent number of teams interested in me after my freshman year,” Miska said. “I felt Arizona’s plan for me was a pretty good one. I felt I had dominated in my year at Duluth, so I felt I had earned a chance to move to the next level.”

Minnesota’s Jordan Greenway took a shot that Miska stops with his left leg. The rebound bounced forward, but in the scramble to control the bouncing puck, it is pushed toward the goal – where Greenway is waiting to slap it into the net.

Miska’s professional debut was unforgettable – for all the wrong reasons.

Playing for the Tucson Roadrunners of the American Hockey League, he surrendered six goals on just 18 shots and was pulled less than seven minutes into the second period.

“I had a tough first game,” he said. “But I kept my head in the game, and I had some good games after that and got into a groove. In my second year I thought I got put into some tough situations, but I thought I had a good year.”

After his two seasons with Arizona, Miska signed with the Avalanche. He spent most of last season with the Colorado Eagles of the AHL and was 16-6-3 with a 2.48 goals-against, and he earned a spot on the bench as a back-up for the Avs during the playoffs.

This year he earned his first NHL start against the Los Angeles Kings on Jan. 21.

“I felt I was ready for the opportunity, and I think it was worth the wait,” Miska said. “I’m a big believer that everything happens for a reason, and I felt I didn’t get a start before that because I wasn’t ready. I was in the right situation, and I had put in the hard work to earn the start. And that first start was a dream come true.”

With the score tied 3-3, the contest moved to overtime, where both Colorado and the Wild skated 3-on-3. Minnesota won the draw and Greenway controlled the puck along the boards to the right of Miska. Suddenly he spotted Jonas Brodin alone in the high slot, and Brodin’s one-timer whistled between Miska’s legs into the goal for the game-winner.

While Miska knows his road to the NHL is a tortuous one, the next step – staying in the league – is even harder.

“It’s all about consistency,” he said. “You need to bring your ‘A’ game every day. In the minors, if you’re good most days, and you’re OK one day, that’s OK. In the NHL, you have to be at your best every day.

“I think I’ve played enough in the AHL that I’ve learned to play with confidence and control to be at my best every day. … That’s what I need to show to stay in the NHL.”

What has made it tougher is dealing with the protocols the NHL has enacted to deal with COVID-19. Life can be a spartan existence, spent either at the rink or in a hotel room – away from teammates, friends and loved ones. And that lonely lifestyle was made worse when the Avalanche was quarantined by COVID-19 concerns soon after the contest against the Wild.

“It’s hard because you’re used to going just ‘going out’ whenever you want,” Miska said. “That can mean going to the grocery store, or going out for dinner, or just hanging out with your friends.

“With COVID-19, we can’t do any of that. And that’s tough, especially for team bonding. The best teams have a great bond that’s formed outside the rink. This stinks for creating that bond, but guys are working on that.”

The protocols force goaltenders to stay separate as much as possible to keep teams from losing both goalies because of contact tracing. That has kept Miska from learning from Avalanche starter Philipp Grubauer, a circumstance that bothers the North Branch native.

“We have to stay in two separate locker rooms to get dressed,” Miska said. “Luckily we can have a bit of goalie practice before the rest of the team comes out, and I like to pick Grubauer’s brain to learn more about the craft. He’s been a great mentor for me, and I’ve been super-lucky to have him take me under his wing and give me tips.”

Please don’t misunderstand: Miska knows many others around the country are facing issues much more difficult than he is.

“We’re fortunate that we’re getting a paycheck, because we realize there are a lot of people who aren’t getting paychecks [because of COVID-19],” he said. “If this is what it’s going to take to be able to earn our money, I’m in on that 100%.”

Miska is no stranger to this area. When the season ends, he lives in Forest Lake with his wife, Kailey, and he works out at Xplode Sports Training in North Branch, which is owned by his uncle, Brett Harper.

And while Miska’s dream of winning an NHL contest in goal at the Xcel Center did not come true, he thanked a number of people for making the dream possible.

“There are a ton of people I have to thank for my career,” Miska said. “My dad, Todd, is one of my biggest supporters as a goalie. He always had gear for me, and he really helped me do something that I really love to do. My mom, Sabina, took me to the rink every day and also was a huge supporter.

“And my wife, Kailey, has helped me in so many ways. We’ve been forced to have a long-distance relationship, but her support for me has been unbelievable. She has kept me grounded. And there have been a number of coaches through the years, and I thank all of them for the help they have given me.”