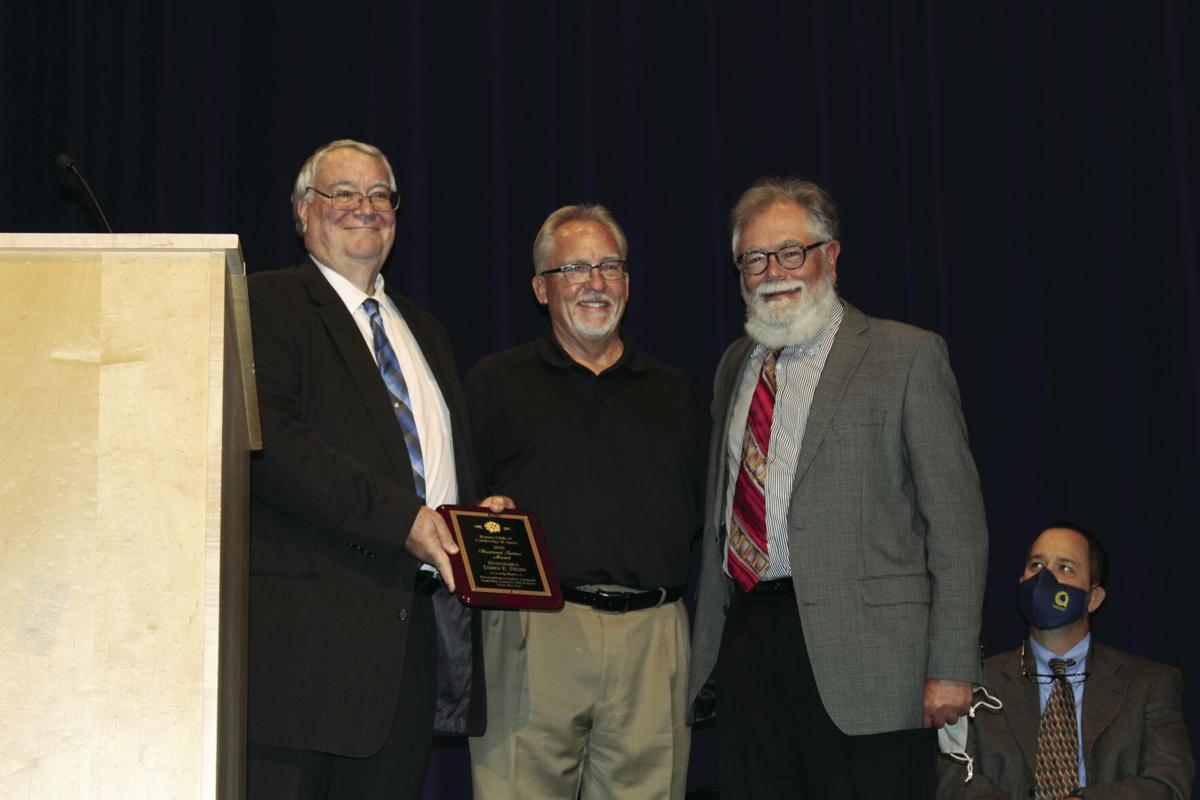 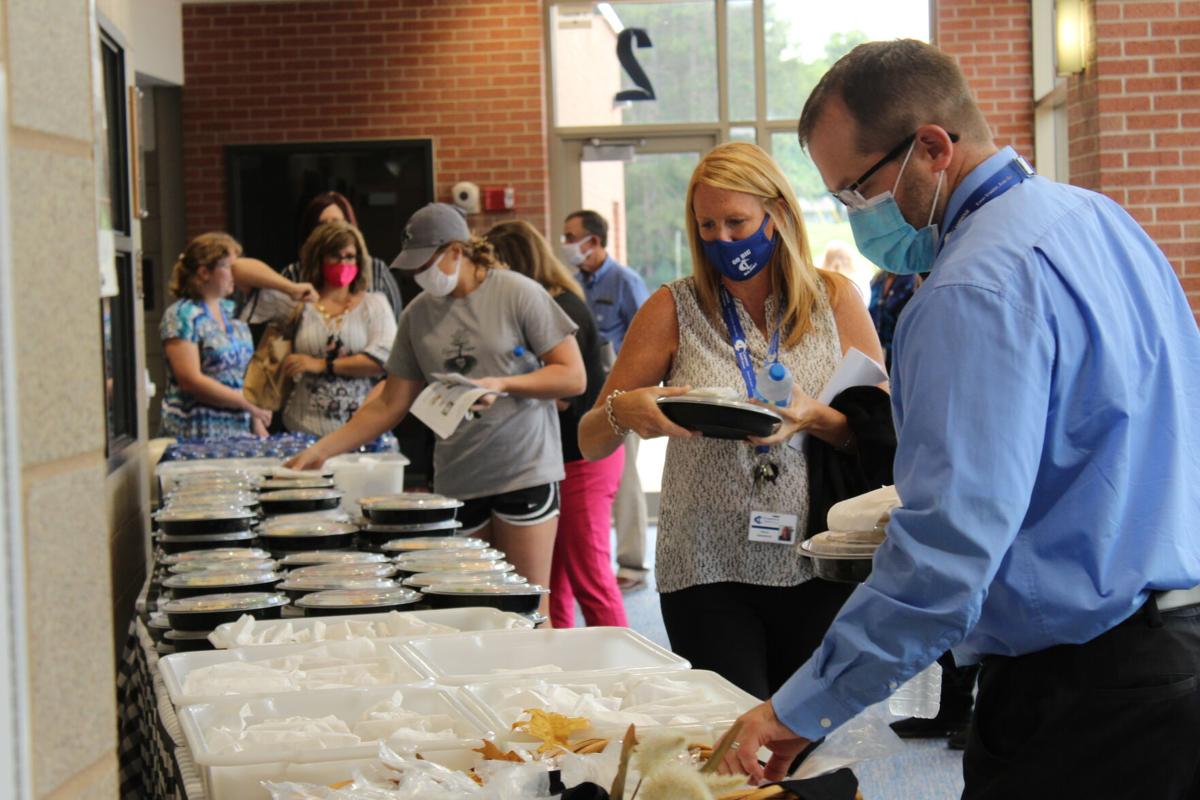 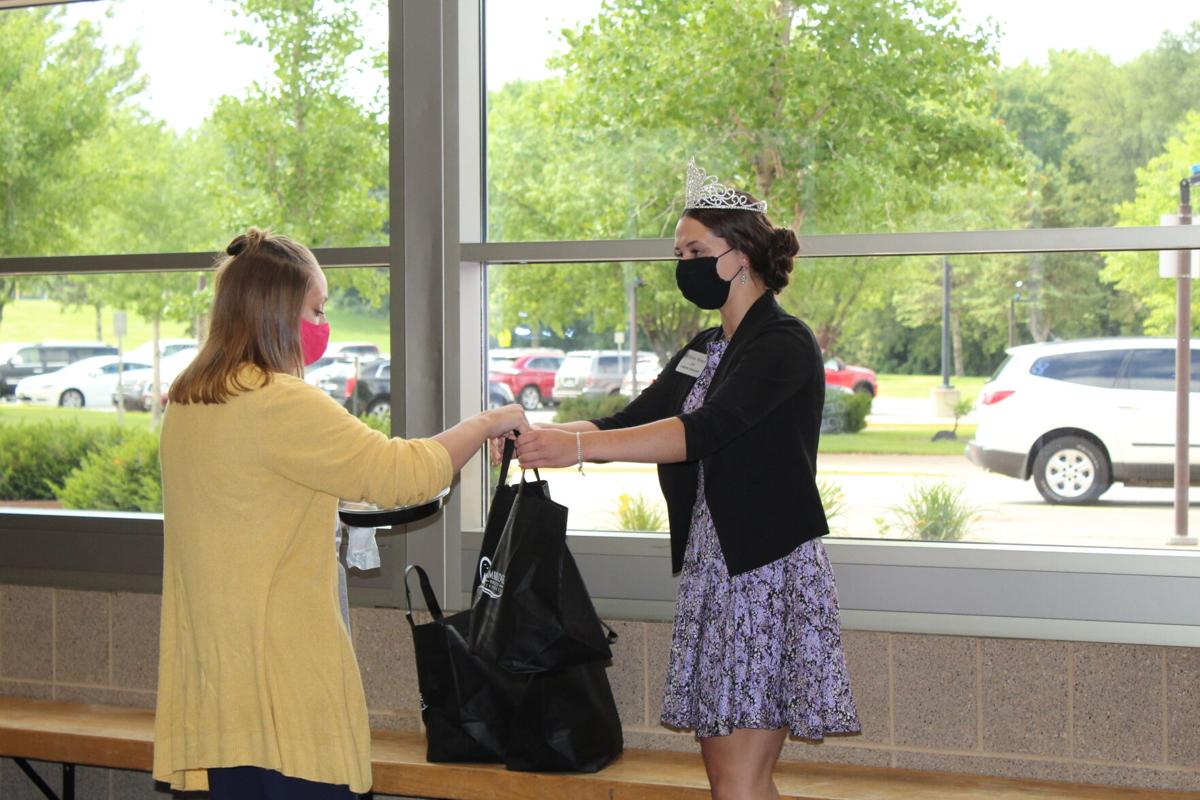 New teachers to the area were honored, while the Rotary Club of Cambridge and Isanti gave out its annual Vocational Service Award, during the 22nd annual New Teacher Luncheon held Aug. 28 at Cambridge-Isanti High School.

The other highlight of the event was the presentation of the Rotary’s 2020 Vocational Service Award to retired Isanti County Judge James Dehn, who was chambered in Isanti County since taking the oath of office on June 26, 1987, until his retirement on June 26, 2017. Even though Dehn is retired, he still fills in for sitting judges as needed across the state of Minnesota.

Rotarian Greg Carlson was the master of ceremonies for the luncheon.

“We all recognize that we are living in challenging times under this cloud of a pandemic,” Carlson said. “Teachers, school administrators and families throughout our county are managing the wild uncertainties of a new school year and facing difficult choices regarding the schooling of our children. No one’s untouched by the effects of COVID-19, whether it was serving in one of the public schools, the charter schools, special education, private school or the community college. Know this: We are grateful, we are a grateful community and recognize the unique challenges of our time. What is not new is the fact that this work, your work, is important.

“As teachers, it’s not about the latest requirements concerning COVID or the meetings you attend for the school funding or all the other stuff you must deal with. While that’s all important, in the end, what really matters is that you are making a difference in the lives of our kids and in the life of our community. You are taking care of people, and for that we are grateful,” Carlson said.

Carlson said when combined, the seven educational institutions represented at the luncheon make up the largest employer in Isanti County, employing over 500 teachers and having a combined enrollment of approximately 7,000 students.

Steve Crittenden, vice president of academic and student affairs at Anoka-Ramsey Community College, thanked all the new teachers for their service.

“Thank you to all the teachers out there, and thanks for what you’re doing in the profession you chose. Welcome to our community,” Crittenden said. “Thank you for all the good work that you’re going to do with our students and have an impact on their lives. While we may not get to teach the way we want or learn the way we want, we’ll persevere, we’ll get through it and we’ll be resilient. And I think we learned that last year in the way this came upon us and we made it. And we’ve had some time over the summer to plan to be more intentional and we will help our students succeed.”

“A special thank you I think needs to go out to everybody that sits in this room that’s been endlessly trying to think about how we’re going to be back in school, working with our kids and being excited to see kids again instead of being through a TV screen,” Moberg said. “And I know that this is all going to keep evolving and changing, but it’s an exciting time for us.”

“I never get anyone to come in my office and talk about our wonderful curriculum or how nice the building looks or anything, but they do come in and they talk about the people that are on our staff,” Gagner said. “You are what makes a school great, never forget that. Everything else can be replaced. But when you hire great people, you’ve got a great school district.”

Carol Kuhn is the new superintendent of Cambridge Christian School.

“I am so excited to build on the 40-plus-year history at Cambridge Christian School and am looking forward to this next decade and all of the extraordinary things that we’re going to be doing, not only this academic year but into this decade, what lies ahead, the technology and new opportunities for all our students as a staff and as administrators,” Kuhn said.

Nathan Rudolph, superintendent of Cambridge-Isanti Schools, mentioned that one year ago the new teacher luncheon was the first formal function he attended as the new superintendent.

“One of the things that I learned quickly as I moved into this role was just how important the people are in this community and how special our communities in our area are because of people,” Rudolph said. “And as we think about embarking on new challenges and new adventures and new opportunities, we get the opportunity as educators to change the world and we get to choose how we do that day in and day out, and for that I’m sincerely thankful to each and every one of you for choosing this path.”

“Welcome, everybody, and I’m super happy to meet all of you new teachers,” Tacker said. “These are different times, but you have a lot of support, and I think it will be a great year.”

Carlson explained the importance of the Rotary’s Vocational Service Award.

“Recipients of this award exemplify service and the pursuit of high ethical standards. They have made considerable contributions of one’s vocational talents to the problems and needs of society and model exemplary vocational leadership consistent with the Rotary’s four-way test,” Carlson said. “I can’t think of an individual more worthy of this award than this year’s recipient.”

Attorney Clark Joslin, owner of Joslin & Moore, is Dehn’s former law partner and mentioned the many accolades Dehn achieved throughout his years as an Isanti County judge.

“Jim, it gives me great pleasure to present with Greg (Carlson) the Vocational Service Award exemplifying your outstanding service in the vocation of law in your field and also from a general citizenship standpoint,” Joslin said.

Dehn thanked the Rotary for the Vocational Service Award.

“I thank you for this award and I appreciate it. To have my good friend say all those attributes to me, I feel like I’m closer to my obituary than my resume, but thank you, Clark (Joslin) and Greg (Carlson), and thank you, Rotary,” Dehn said. “But students and teachers, bring students into court, because we can do marvelous things for your kids.”

In 1998, Dehn pioneered the DWI staggered sentencing program, which allows repeat DWI offenders to spread out their actual jail sentences over several years. If offenders are able to prove they are staying sober and law-abiding, they become eligible to have the next segment of their jail sentence suspended. The practice is now used in approximately 30 states. In 2002, the Research Department of the Minnesota House of Representatives found DWI offenders given staggered sentences experienced 49.9% less DWI recidivism than comparable DWI offenders. A similar study conducted by the National Highway Transportation Safety Association in 2011 found staggered sentences reduced DWI recidivism by over 30%.

As a result of his staggered sentencing program, Dehn received the Distinguished Public Leadership Award from the Center for Transportation Studies University of Minnesota in 2016; the Kevin E. Quinlan Award for Excellence in Traffic Safety from the Century Council in 2013; the Paul H. Chapman Award from the Foundation For Improvement of Justice Inc. in 2003; and recognition in Time magazine on April 29, 2002.

In 1993, Dehn became the first judge in the nation to put multiple-repeat DWI offenders on the home pre-trial electronic alcohol-monitoring program. Under the program, reoffenders awaiting trial have an electronic monitor placed in their homes requiring frequent sobriety checks.

This program led to Dehn receiving the Outstanding Judge Award by the Minnesota District Judge’s Association in 2000 and the National MADD President’s Award in 1996, and he was recognized in the Wall Street Journal on May 24, 1994.

In 2006, Dehn worked with community leaders and business owners to establish the Isanti County Safe Cab program, which reduced DWIs in the county by more than 67% by 2013 – the largest decrease of any county in Minnesota. The Safe Cab program has served as a model for other counties across the state and has just reached over 25,000 riders. Dehn helped create the nonprofit Minnesota Safe Ride, which has launched the Safe Cab programs in Pine, Kanabec, Chisago, Sherburne and Mille Lacs counties.

“His work led to Isanti County ranking No. 1 in reduction of DWI arrests, a decrease of over 65%, over a span of seven years,” Joslin said. “He’s often been called upon to testify before the Minnesota Legislature with regard to other DUI law changes. And many of the innovations that have resulted in an overall reduction of DWIs in the state can be attributed his work and his input to the Legislature.”

As a result of Safe Cab, Dehn received various state awards from MADD in 2014 and 2006 and Minnesota Toward Zero Deaths Star Award in 2009.

Dehn helped start the high school mock trial program in the Cambridge-Isanti High School in 1988 and has coached the teams for over 17 years. He has judged at the state and national mock trial competition since 1992.

In addition, Dehn has taught creative sentencing to Minnesota judges for nearly 20 years and has been an adjunct instructor at the National Judicial College in Reno since 2002; has brought thousands of high school students into his courtroom to observe court and instruct them on the third branch of government; and has created and organized a poster-tabletop tent slogan contest for all middle school students in Isanti County since 1999. Dehn received the National MADD Distinguished service award in 2001 for the poster-tabletop slogan contest.

Dehn encouraged the new teachers to contact the local Isanti County judges when COVID restrictions loosen up and ask to bring students in to see court proceedings in action.

“Clark (Joslin) was a speaker at my swearing in back in 1987,” Dehn said. “Over my years, I brought in over 3,000 students to watch court in my courtroom, probably more than that. It was fascinating.

“I would encourage you as you can and when COVID spacing relaxes, call the judges, Judge Amy Brosnahan and Judge John Klossner, who succeeded me, great people. They’d be more than welcome to invite, once court opens up and relaxes, to bring your student class in,” Dehn added.