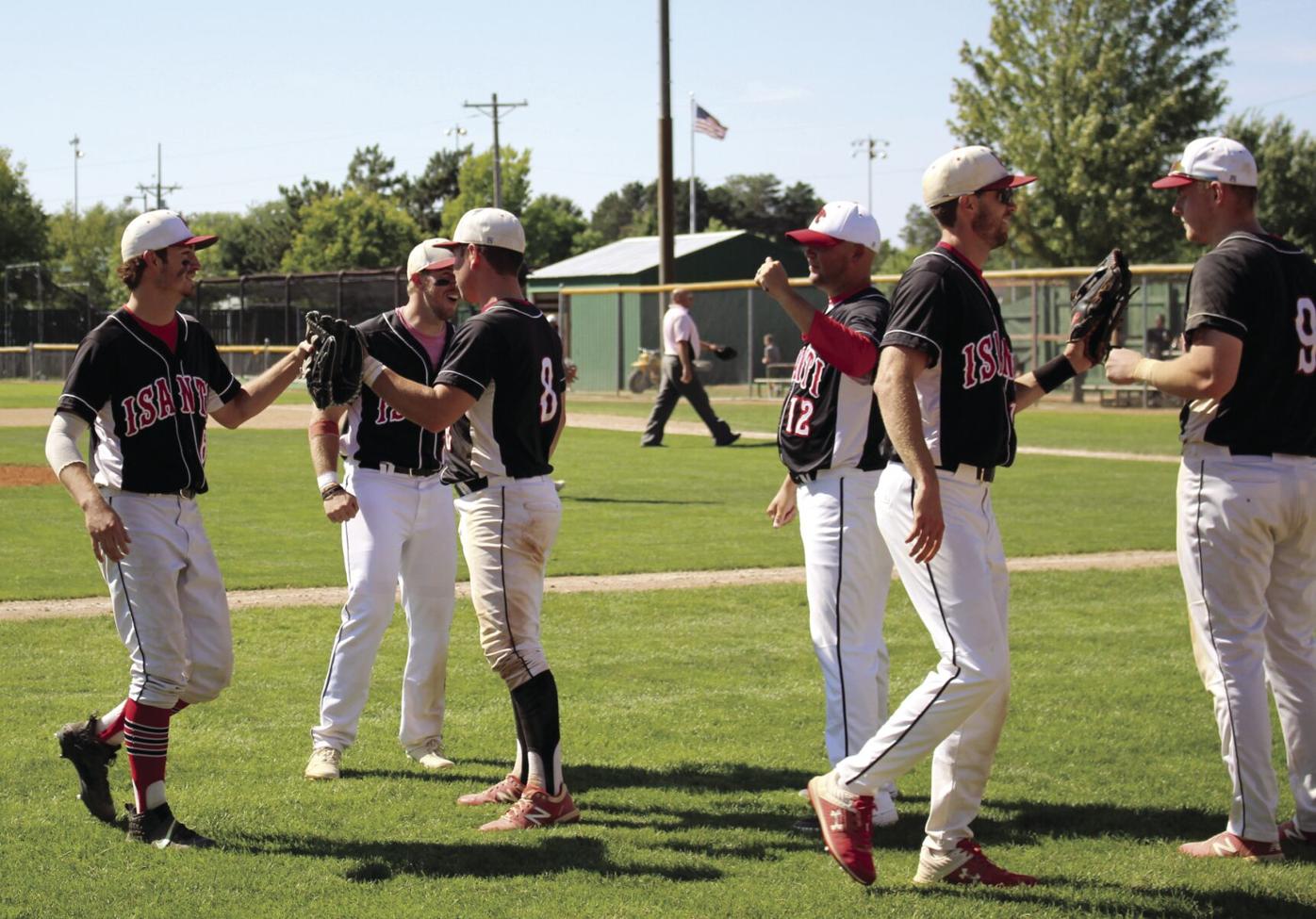 The Redbirds celebrate after finishing their 16-1 win over Princeton. In four games, Isanti outscored its competition 48-1. Photos by John Wagner 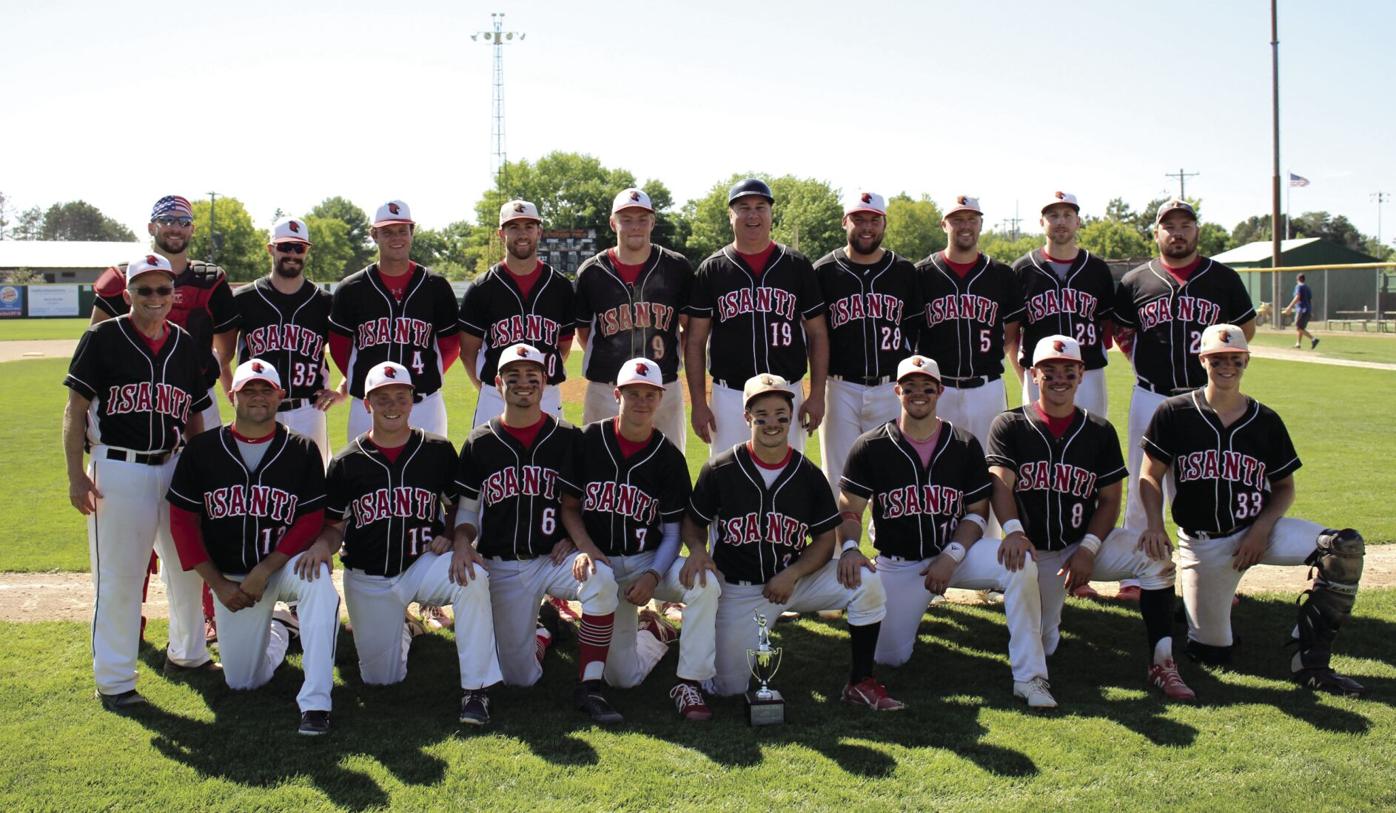 The Isanti Redbirds take a team photo with the Class C Region 1 trophy the team won by routing Princeton on Sunday, Aug. 15.

The Redbirds celebrate after finishing their 16-1 win over Princeton. In four games, Isanti outscored its competition 48-1. Photos by John Wagner

The Isanti Redbirds take a team photo with the Class C Region 1 trophy the team won by routing Princeton on Sunday, Aug. 15.

For the Isanti Redbirds, the Class C Region 1 tournament was nearly perfect.

The Redbirds won all four of their games by a combined score of 48-1, with three of the four games not going the full nine innings because of the 10-run rule.

Isanti earned its state tournament berth with a 10-0 rout in seven innings over Hinckley on Friday, Aug. 13, then claimed the region’s top seed with a 16-1 seven-inning mauling of Princeton two days later.

And truth be told, the only hiccup in the two-weekend tournament came when manager Steve Allen injured himself on the day between those two contests.

While riding his road bike Saturday morning, Allen moved to the side of road to avoid traffic, only to have the asphalt under his bicycle break loose, causing him to crash to the ground.

“I’m starting to feel a little better – and the way the team has played certainly helps that,” Allen said Sunday.

Isanti never was challenged in the tournament, crushing East Bethel 13-0 in its opener Aug. 7, then beating Quamba 9-0 the next day to set up this weekend’s games.

“The guys really came into to this tournament focused,” Allen said. “The pitching, the hitting, the defense all were terrific.”

Friday’s starter against Hinckley, Phil Bray, set the tone for the weekend by allowing just three hits and one walk while shutting out the Knights with 11 strikeouts.

“Phil is a bulldog,” Allen said. “There are times where Phil will pitch during the day, then have to work at night. He’s a big-time competitor. And Phil is such a smart pitcher. He may not throw as hard as he once did, but he’s so savvy on the mound, he knows how to get outs.”

Meanwhile the Redbirds pounded out 10 hits and also took advantage of nine walks and a pair of hit batsmen to run-rule the Knights. Every starter except Wyatt Soderquist had a single in the victory, and Soderquist had a triple instead.

“If you play a lesser pitcher, perhaps you’re not as focused, and you pop up and ground out – and make it easy on them,” Allen said. “That wasn’t the case with us. We were focused all the way through. And our guys were focused on picking up one another. If one guy had a bad at-bat, the next guy would pick them up. And that type of hitting was contagious.”

Friday’s victory punched the Redbirds’ ticket for the Class C state tournament, and Sunday’s win over Princeton clinched a No. 1 seed for Isanti. Princeton was forced to win twice on Saturday and once on Sunday to reach the championship game against the Redbirds, which left the Panthers without much pitching.

And the Redbirds took advantage, piling up 13 hits, six walks and two hit batsmen while also taking advantage of four errors to reach 16 runs by the fifth inning. Soderquist led the way with three hits, including a double, while Logan Kalis, Blaze Hogie and Mitch Dunbar had two hits apiece.

That was more than enough offense thanks to starter T.J. Wink, who allowed just four hits and no walks while fanning eight in the first five innings, while Brent Tholen pitched two scoreless frames to close out the victory.

Isanti will receive a first-round bye in the Class C state tournament and will open against the winner of a contest between Sobieski and Windom on Sunday, Aug. 29, starting at 4:30 p.m. in Chaska. A win would push them into a quarterfinal contest on Saturday, Sept. 4, in Waconia.

The Redbirds added three players to their roster for the state tournament, all pitchers: Jimmy Skroch of North Branch, Max Spitzer of St. Francis – who has played for the Redbirds in previous seasons – and Parker Leipzig of East Bethel.