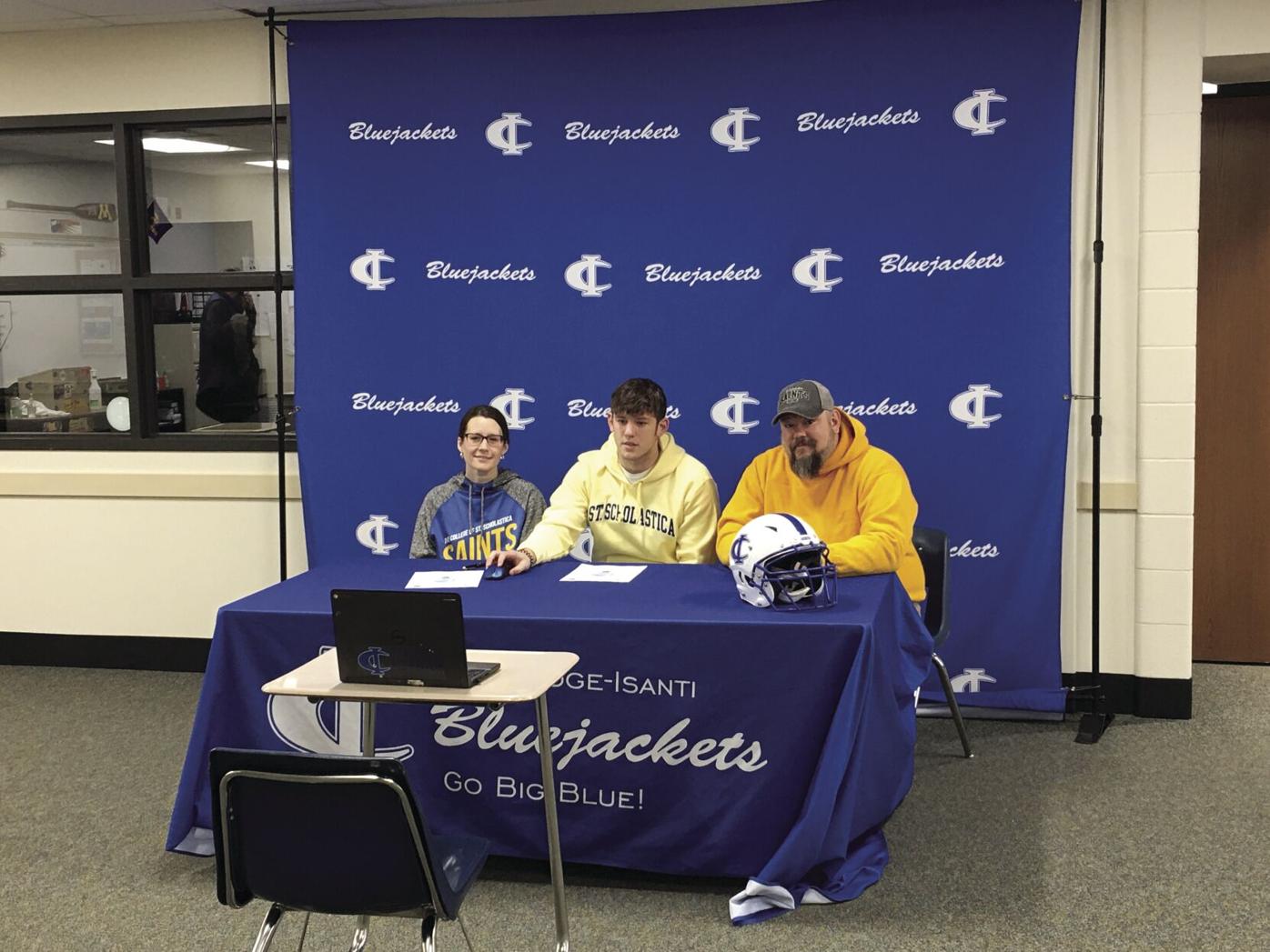 Cambridge-Isanti senior Aleck Dee, wearing a St. Scholastica sweatshirt, is surrounded by his parents (from left), his mother, Anna, and his father, Brian. 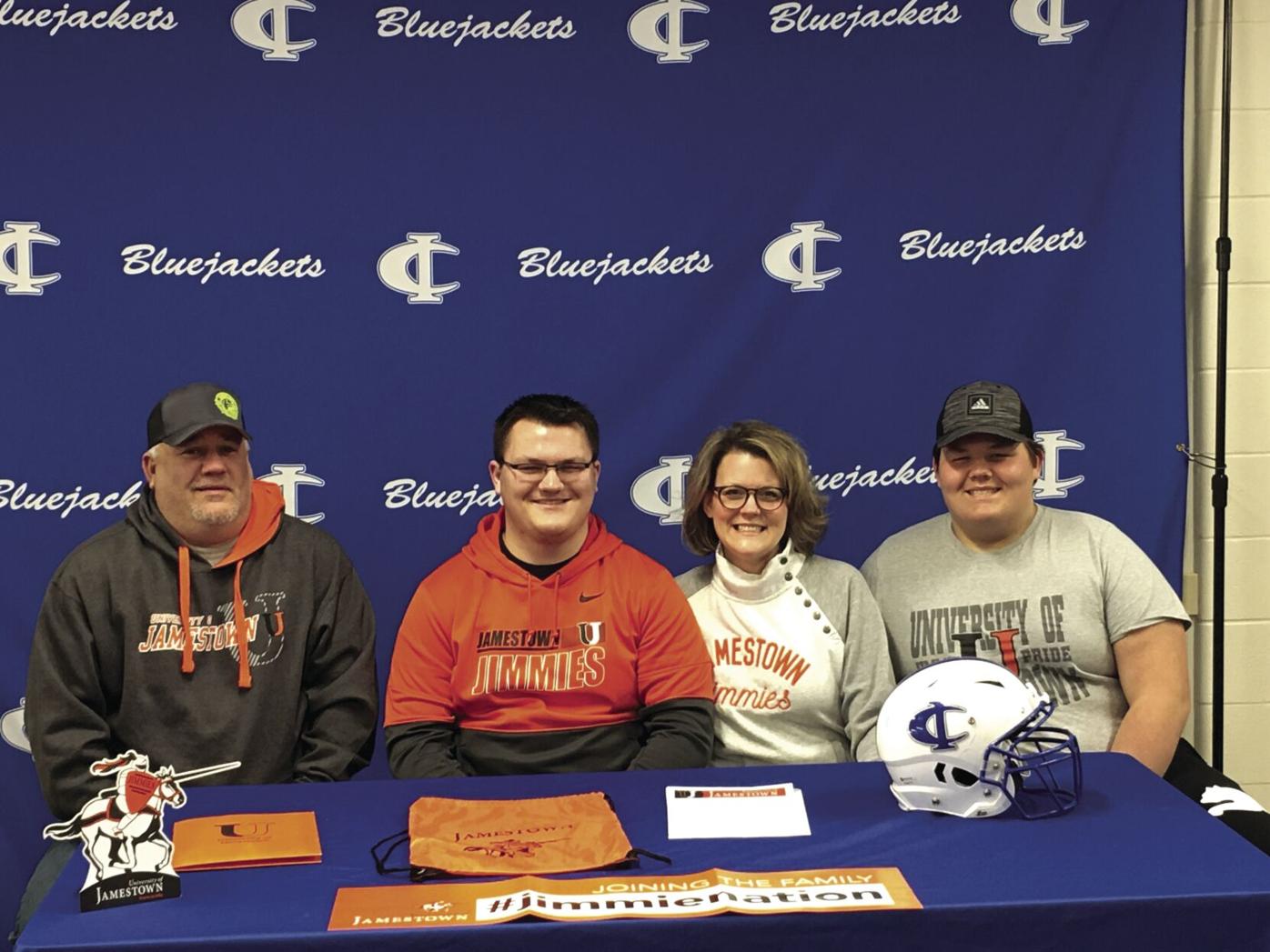 Cambridge-Isanti senior Daniel Muehlberg, wearing the orange Jamestown sweatshirt, shares his signing day with his family. From left is his father, Hugh, his mother, Shannon, and his younger brother, Dalton. Submitted photo

Cambridge-Isanti senior Aleck Dee, wearing a St. Scholastica sweatshirt, is surrounded by his parents (from left), his mother, Anna, and his father, Brian.

Cambridge-Isanti senior Daniel Muehlberg, wearing the orange Jamestown sweatshirt, shares his signing day with his family. From left is his father, Hugh, his mother, Shannon, and his younger brother, Dalton. Submitted photo

For both athletes, the adversity they overcame to receive these offers was impressive.

Muehlberg admitted he was both surprised and pleased to get the opportunity to play collegiately at Jamestown.

“This is almost unreal for me,” he said after signing his national letter of intent. “A couple of years ago I wasn’t even sure I was going to graduate, because I had a lot going on. But I got everything together, and I’m sitting here today.”

Muehlberg said the struggle began in fifth grade, when he had some health complications that made playing football a concern.

“I had some head issues that made it hard for me to concentrate and do good in school, so I struggled for a time in school,” he admitted. “But recently we were able to figure out how to deal with those issues.”

Football provided part of the inspiration for Muehlberg to deal with those issues.

“Most of the time I had a lack of motivation,” he said. “But learning that colleges were interested in my ability gave me a reason to get good grades and do well in school. It was one of the pushes I needed to buckle down and work at my schooling.”

On the football field for Cambridge-Isanti, Muehlberg started at defensive tackle as a junior, but late in the season he switched to offense to play center. Last year he began the season as the center of the offensive line, but late in the year he moved back to defense.

“Whatever we needed him to do, he did it,” Weibel said of Muehlberg, who earned all-district honorable mention as a senior. “Even when he had to move mid-season, he made huge contributions at defensive tackle. He is a throw-back player who is a hard worker and hard-nosed.”

Muehlberg said he chose to sign with Jamestown because of the community.

“If you leave the campus, it feels like another Cambridge,” he said. “It was a home away from home.”

While Jamestown listed Muehlberg as an offensive lineman on its list of signees, the 5-foot-9, 270-pounder said the school has not cemented his collegiate position.

“When I talked to the head coach during my visit, he said he didn’t know what position they wanted me at – he just wanted me there,” said Muehlberg, who plans to pursue a degree in mechanical engineering. “Wherever I can get on the field fastest, that’s the position I want to play.”

Muehlberg thanked his teammates and coaches for his development.

“I wouldn’t have the opportunity to be here without them,” he said. “And I want to thank my parents, Hugh and Shannon, for supporting me, whether it was bringing me to practice or for all of their support.”

Dee learns to love blocking as well as catching passes

For Aleck Dee, the “struggle” was for more playing time as a junior. The 6-foot-1, 180-pounder was unhappy with his inability to get on the field, so he asked Weibel what he would need to do increase his playing time and opportunities to catch passes.

“When I had Aleck at a wing spot in his junior year and he had to block, sometimes it was a struggle,” Weibel said. “We had a conversation, and I told him, ‘If you want to play, you have to block.’ As a senior, he changed his demeanor and focus. It changed from ‘I want to catch the football’ to ‘I know if I play hard and block hard, I’ll have passes thrown to me.’ And I was so proud of that – it showed a lot.”

Weibel said he noticed the improvement in Dee as a senior.

“He really come on at the end of the season with some really big catches,” Weibel said of Dee, who caught nine passes for 40 yards. “But what he did away from the ball, especially blocking, became his strength – and the biggest reason he was named all-district honorable mention.”

“The city of Duluth is a really cool place, and the opportunity to do stuff there is exciting,” said Dee, who plans to major in biology at St. Scholastica with the eventual goal of becoming a chiropractor. “The academics are pretty good there, too.

“The coaches are good people, and I think it’s going to be a fun place to play.”

Dee, who expects to be a slot receiver for the Saints, thanked his parents, Brian and Anna, as well as his coaches for their role in his development.

“I want to thank my mom and dad for their support, because growing up they taught me to do my best and have fun,” Aleck Dee said. “And my coaches have given me the opportunity to play, and they taught me how to work hard to have success.”