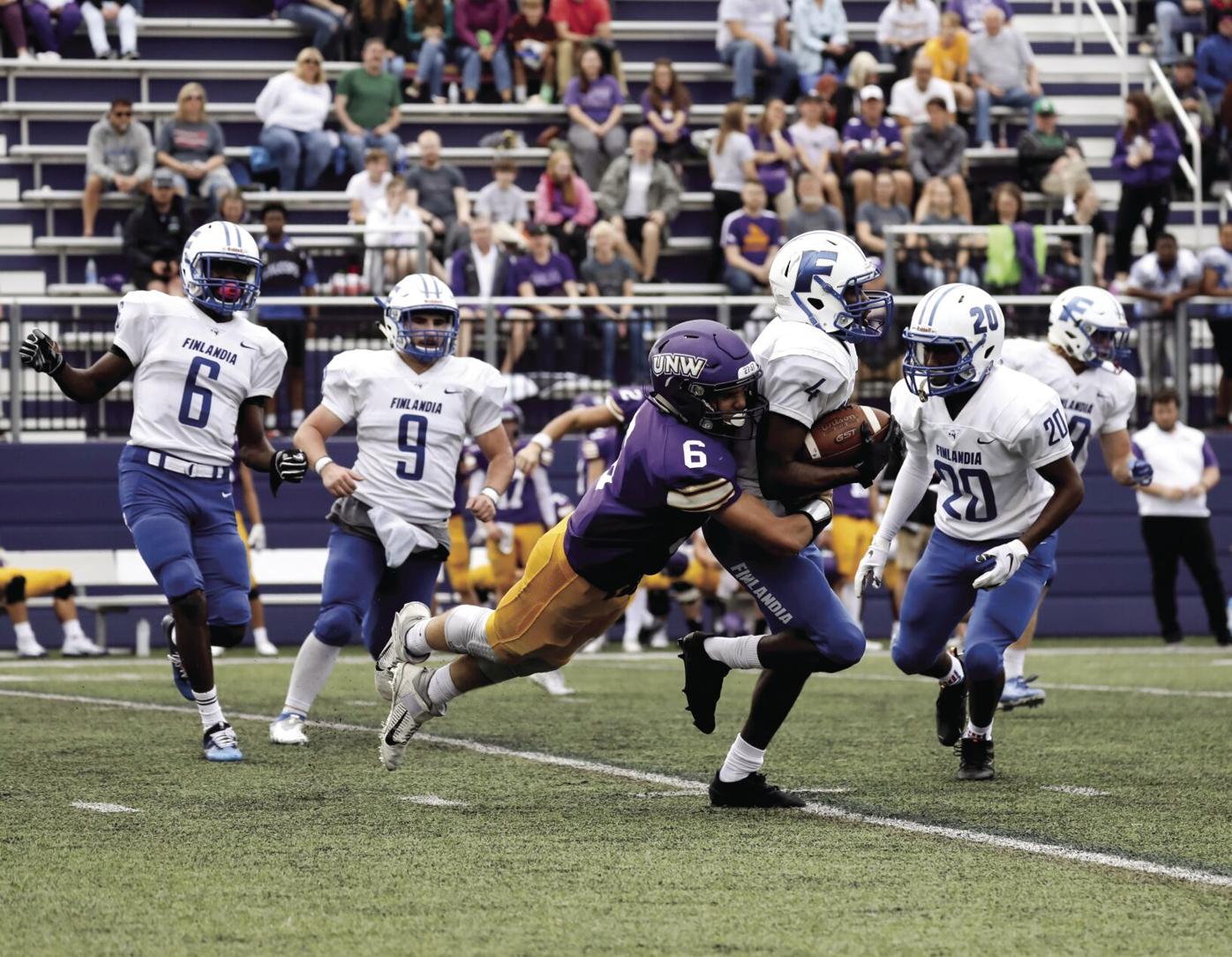 Cambridge-Isanti graduate Luke Malamisuro makes an open field tackle for the University of Northwestern football team during the Eagles’ home win over Finlandia this season. Photos courtesy of Alicia Korpi and UNW Athletics 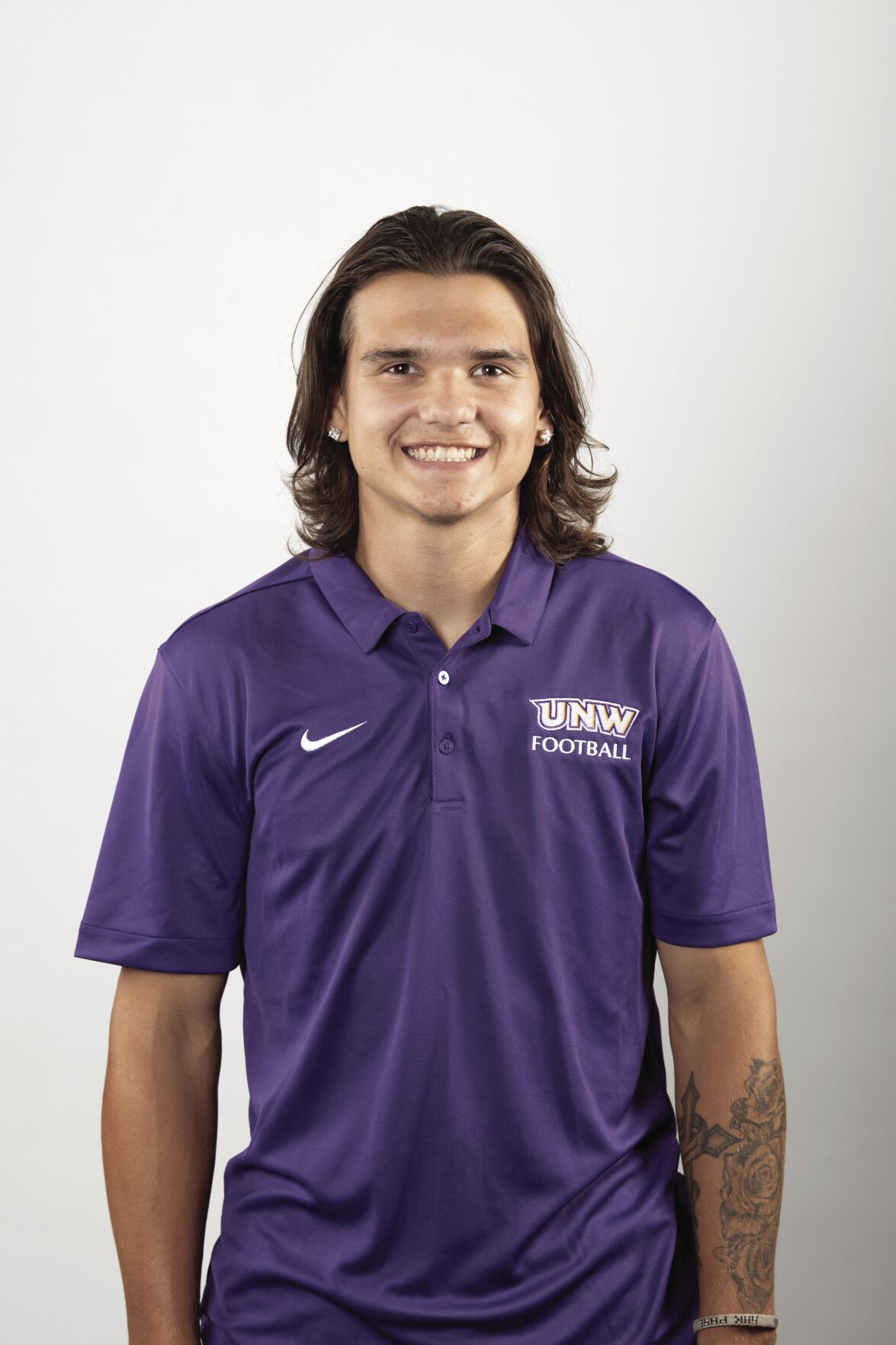 Luke Malamisuro earned All-Upper Midwest Athletic Conference second team honors as a defensive back at the University of Northwestern.

Cambridge-Isanti graduate Luke Malamisuro makes an open field tackle for the University of Northwestern football team during the Eagles’ home win over Finlandia this season. Photos courtesy of Alicia Korpi and UNW Athletics

Luke Malamisuro earned All-Upper Midwest Athletic Conference second team honors as a defensive back at the University of Northwestern.

This fall Luke Malamisuro was honored by football coaches around the Upper Midwest Athletic Conference for his fine play as a member of the University of Northwestern football team.

Not bad for someone who went to college on a basketball scholarship.

That is not a misprint: The Cambridge-Isanti graduate originally went to Northwestern to play basketball, not football.

“I had some buddies who wanted me to play football,” Malamisuro said. “I had been thinking about playing football, but I didn’t know how busy I would be with basketball and football together. I missed playing football, so I ended up doing that instead.”

For Malamisuro, the change was made because of opportunities.

“Honestly, it wasn’t difficult to choose football over basketball,” he said. “As much as I enjoyed playing basketball, I knew I could play basketball at any time. I wouldn’t be able to put shoulder pads and a helmet on and hit kids unless I played football.”

It helped that the football coaching staff at the St. Paul-based school was supportive as he made the transition.

“I had some high school film,” he said. “The coaches here made it an easy transition for me. I enjoy working with them.”

Malamisuro started working out with the Eagle football team in the fall of 2020, then saw action in the only two games the team managed to play this past spring because of COVID-19 restrictions. He admits that the delays turned into a break, because that was enough to allow him to ease his way into becoming a college football player.

“I took it as a free football season,” Malamisuro said. “It gave me a chance to learn about the team, learn about the plays and defenses and formations. It helped to have time to get into a groove after not playing for two years.

“I think having the spring [games] helped me this fall. I got a chance to learn how the game works in college, what the hitting was like compared to high school.”

Malamisuro said his confidence that he could play college football grew in a spring contest against Minnesota-Morris.

“In that game, I made this big hit,” he said. “I remember all of our guys on the sideline were going crazy. As they amped me up, I realized, ‘I can do this.’

“I’m pretty calm when I’m on the field, but at that moment I realized how much fun it was to be on the team with these guys.”

This fall Malamisuro’s role grew significantly. He led the Eagles in total tackles (84) and solo stops (52) while adding a pair of interceptions and a team-high eight passes broken up. One of his best efforts came against Finlandia, as he made 10 solo tackles and 11 total tackles while breaking up three passes in his team’s 16-13 victory.

“I just had a good time with the players and the coaches,” he said of the season. “I enjoyed getting a chance to choose my position, because I really loved playing defense. I love the scheming to stop the offense, and I love to hit people.”

Northwestern finished with a 3-7 overall record and a 3-3 mark in UMAC play, but Malamisuro judged the success of the season with other measures.

“I thought our record didn’t matter as much because we loved playing together,” he said. “Even though we didn’t have an amazing record, I thought we grew a lot as a team.”

Despite the second-team honors, Malamisuro knows there are areas where he can improve.

“You can always get better,” he said. “For me personally, I want to work on my footwork; I have speed, but having good footwork would help me improve. I also played some safety, so I’d like to learn how to play that position better.”

His plan is to play football for two more seasons, then graduate after the fall of 2023 with a business degree.

“I could play one more season after that, depending on how classes go,” he said. “I like designing clothes, so I’d like to start my own small business. I’m able to look at stuff online and customize T-shirts for my friends, and that has been fun.”

So does Malamisuro miss basketball?