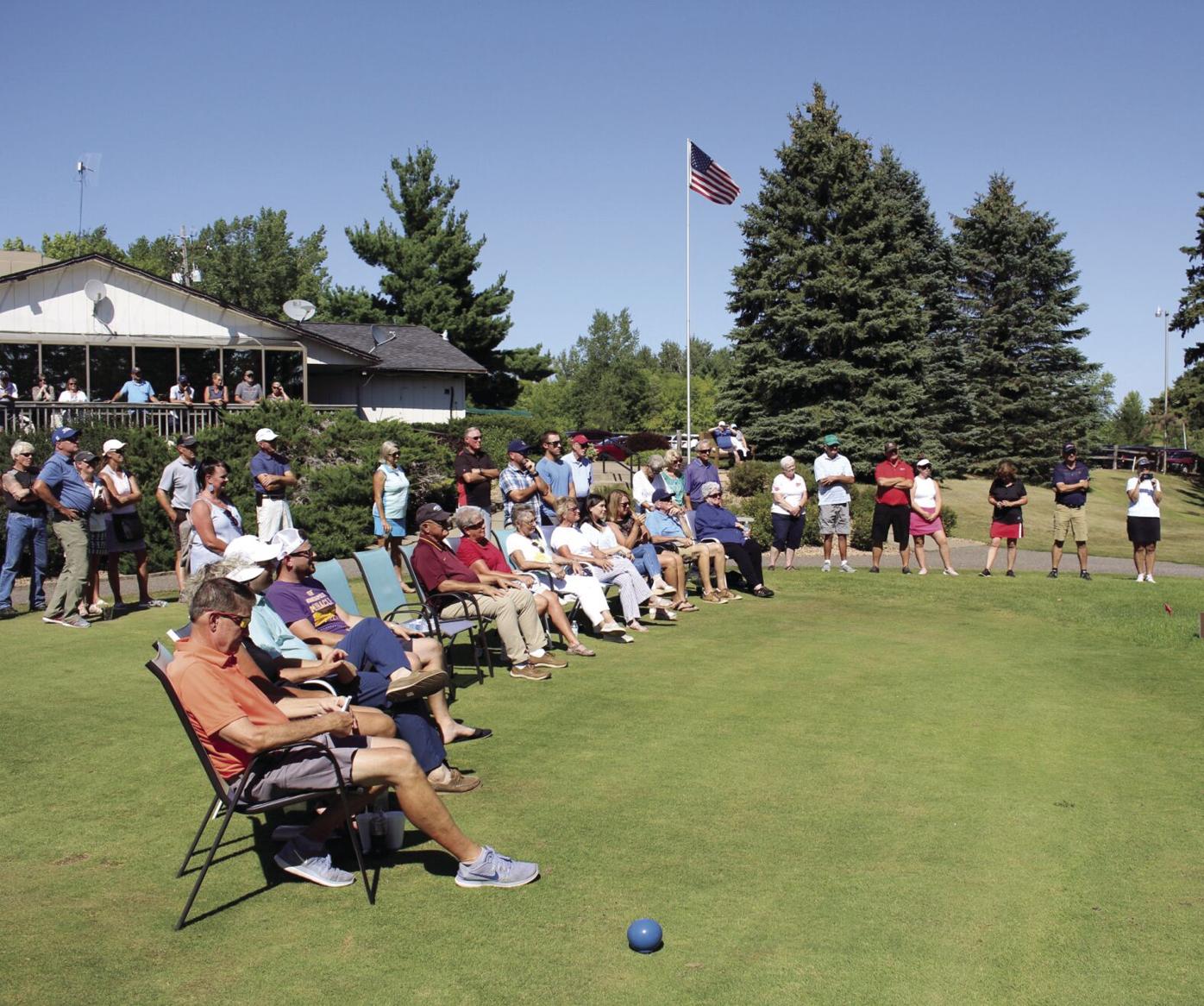 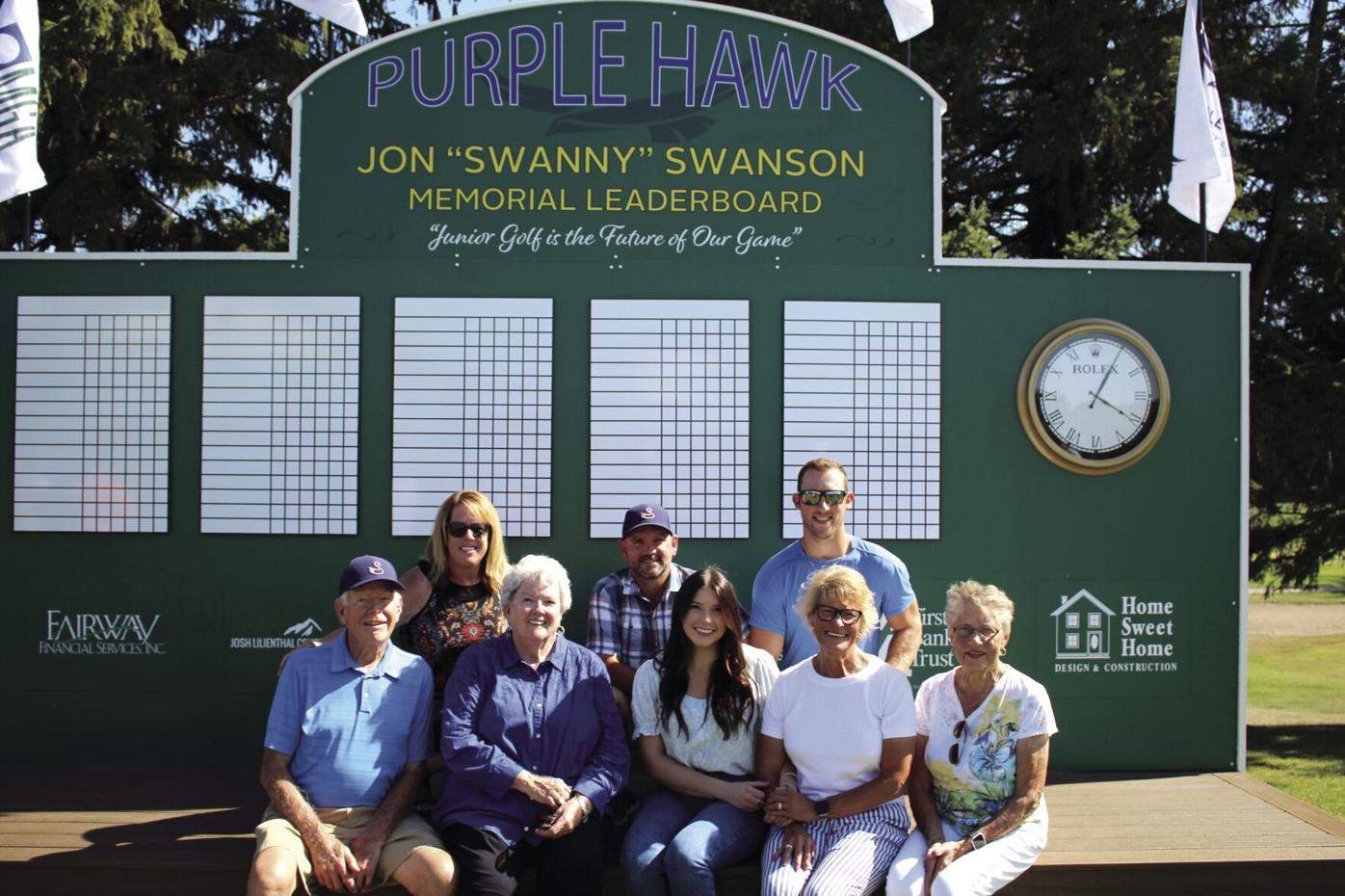 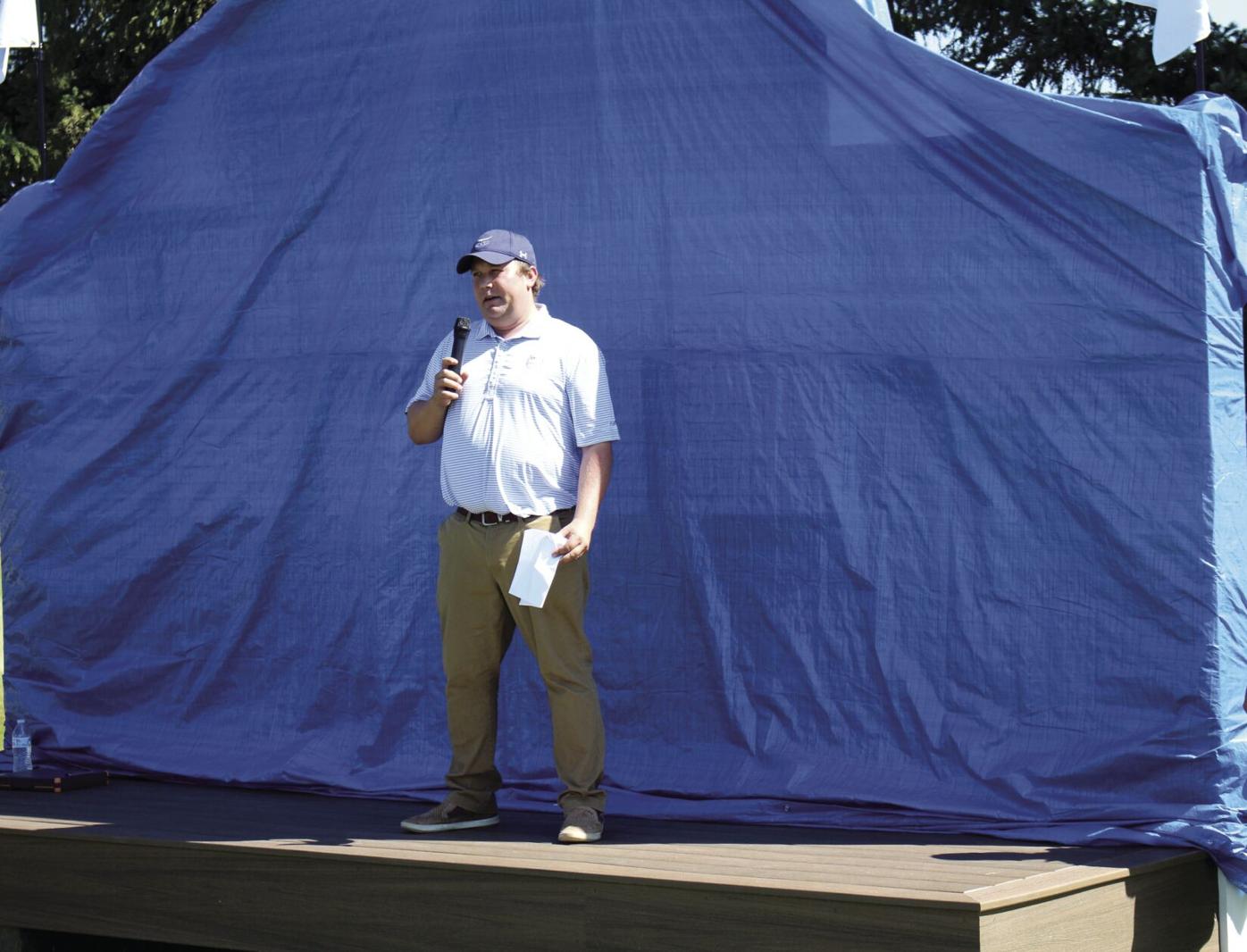 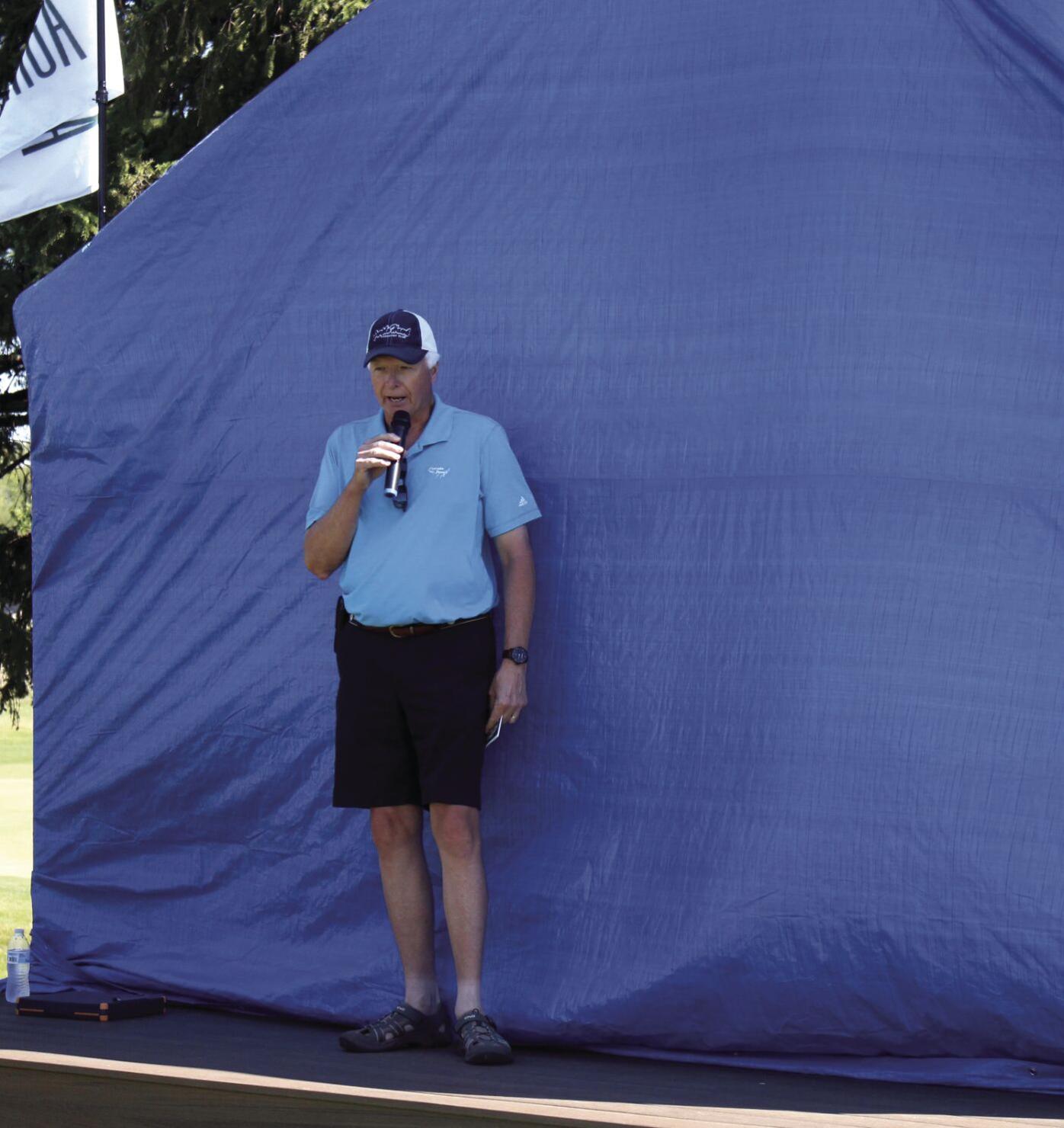 Don Grossbach tells the story of how Jon Swanson was hired as the first PGA pro at Purple Hawk. 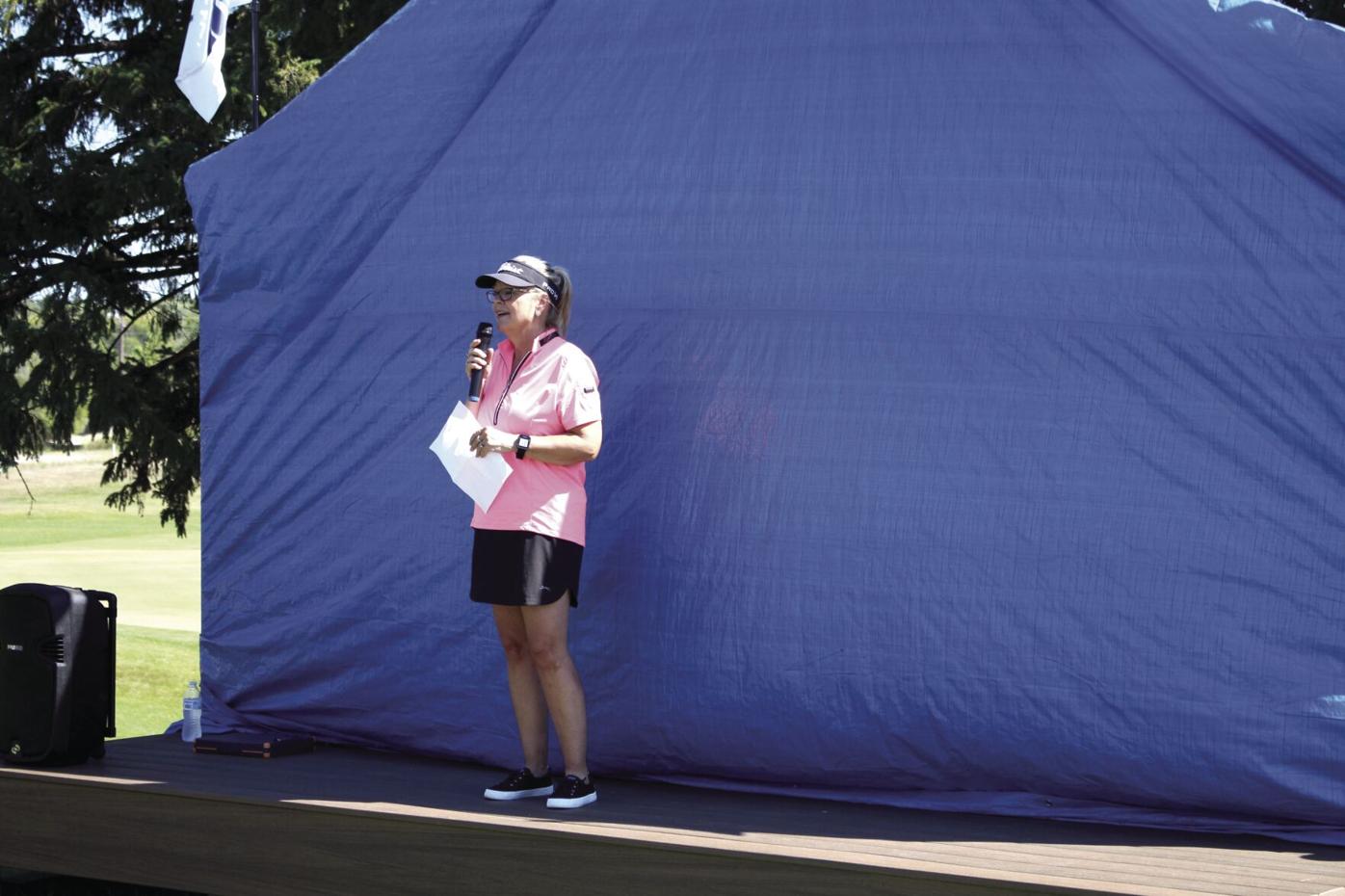 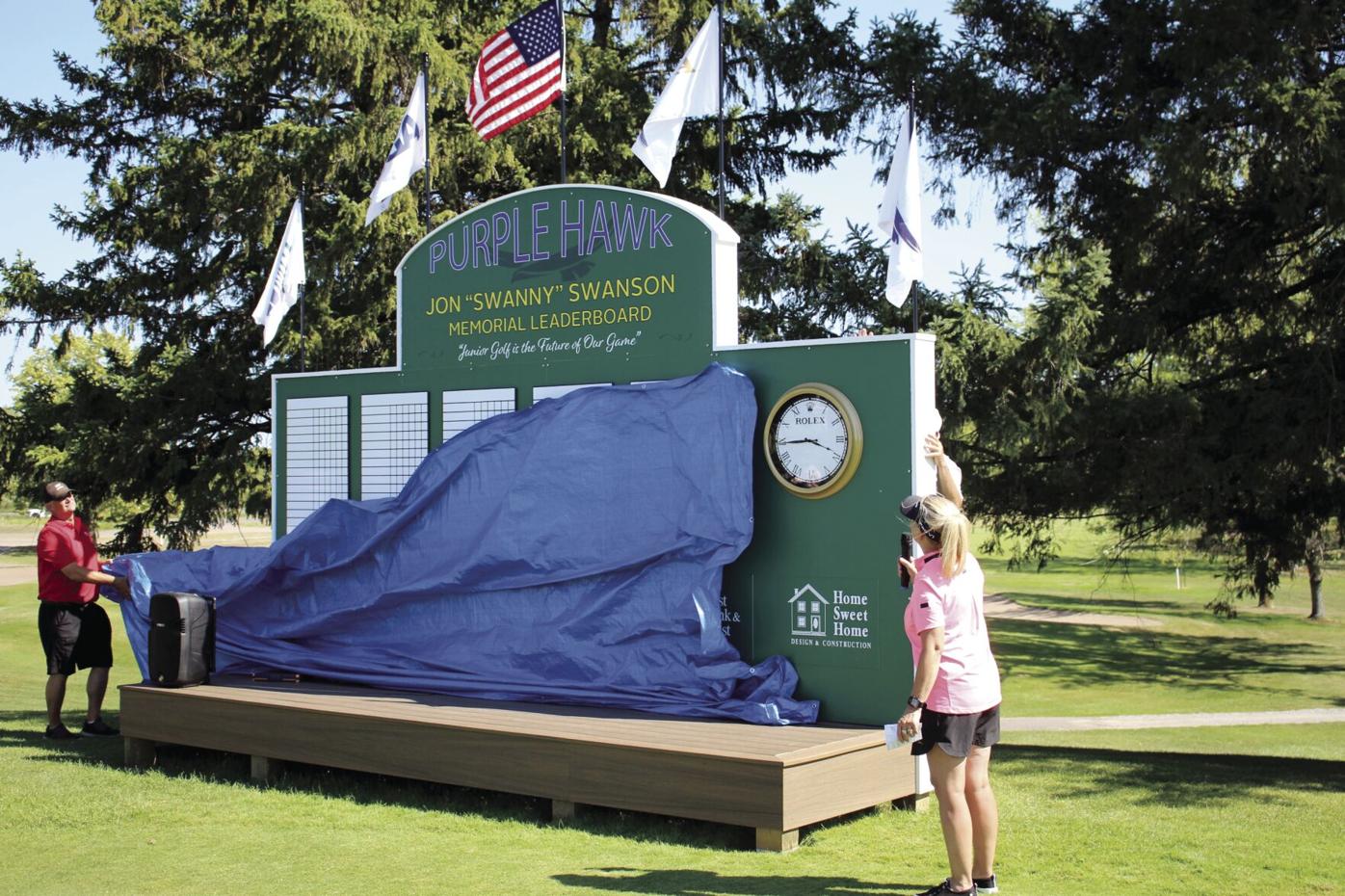 The new leaderboard was unveiled following a tribute to former PGA pro Jon Swanson, whose name is on the leaderboard. 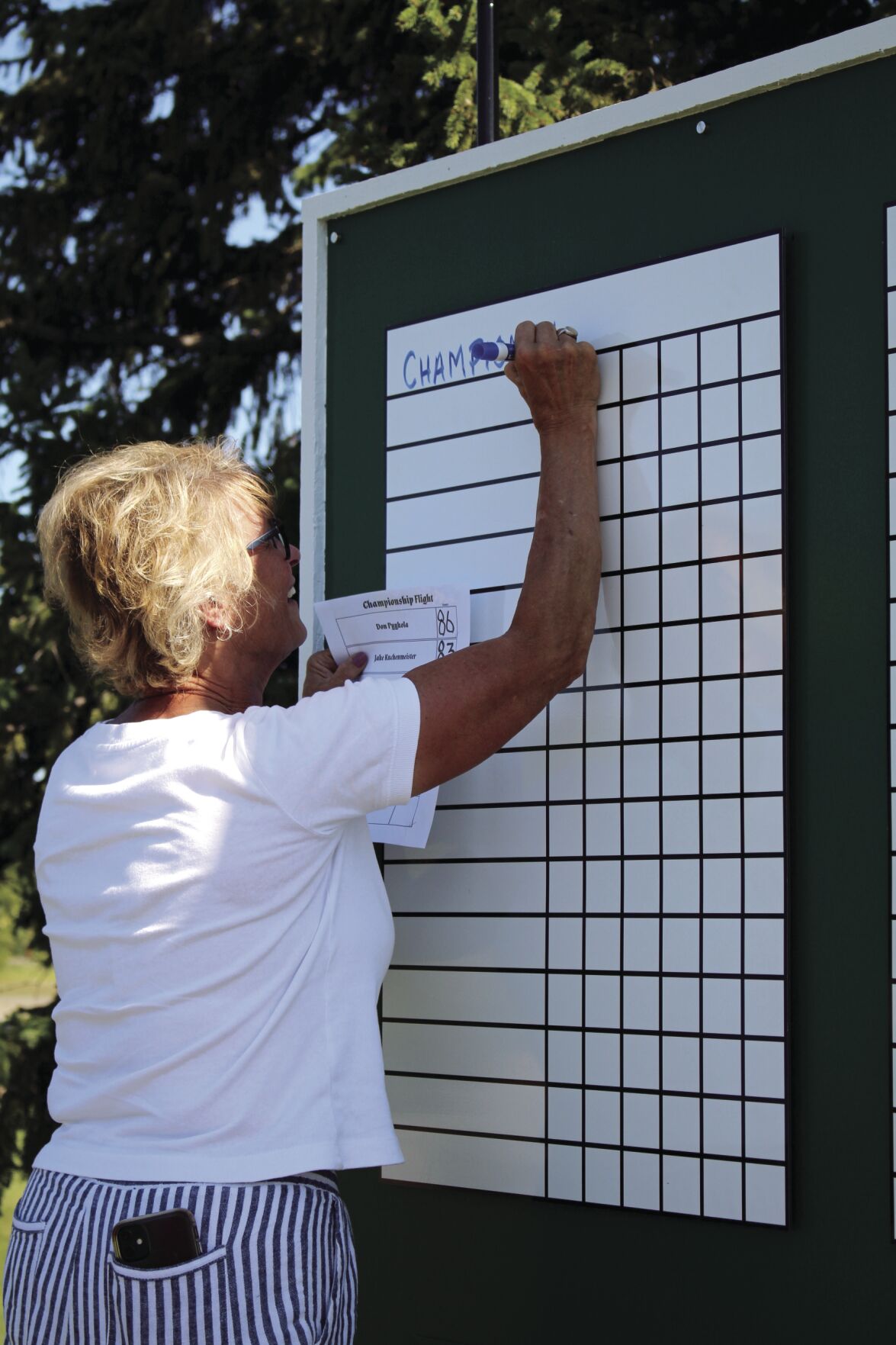 Kathy Swanson writes the first names on the new leaderboard at Purple Hawk on Saturday, Aug. 14. The names were of the leaders of the club championship held that day.

Don Grossbach tells the story of how Jon Swanson was hired as the first PGA pro at Purple Hawk.

The new leaderboard was unveiled following a tribute to former PGA pro Jon Swanson, whose name is on the leaderboard.

Kathy Swanson writes the first names on the new leaderboard at Purple Hawk on Saturday, Aug. 14. The names were of the leaders of the club championship held that day.

Purple Hawk Country Club unveiled a new leaderboard for the course on Saturday, Aug. 14. But the dedication also was a tribute to Jon “Swanny” Swanson, whose name is prominent on that leaderboard.

Bev Paron, current president of the course, led the program that unveiled the new leaderboard and gave those in attendance an insight into Swanson, who served as the club’s first PGA pro.

Don Grossbach, who was on the club’s board of directors when Swanson was hired, admitted that, when the club began its search for a pro, Swanson was not originally a finalist for the job.

A stalemate in the hiring

process, and a call from an equipment supplier who sang Swanson’s praises, resulted in his interview.

“When Jon came into that interview, he brought a briefcase with him,” Grossbach said. “In his briefcase he pulled out a budget, and it even included the cost of materials to decorate the golf shop. After the interview, the committee came together and said, ‘That’s the guy.’

“Afterwards, we found out his nickname was ‘Mr. Briefcase.’ But we also had a number of people tell us we had hired a good one.”

Swanson’s wife, Kathy, knew her late husband was well known for that briefcase.

“One of the reasons ‘Swanny’ was nicknamed ‘Briefcase Boy’ was because, at one of the merchandise shows he had attended, he had changed the code to unlock the briefcase – and he couldn’t remember the code,” Kathy Swanson said. “I still have that briefcase, and we still have no idea what’s in that briefcase.”

But that was one of the few missteps by Jon Swanson, who spent many years at Purple Hawk before joining Minnco Credit Union in Cambridge.

One of the speakers at the dedication was Matt Grell, current PGA pro at Purple Hawk.

“I knew when I came here, I had huge shoes to fill – I know I never will fully fill them,” Grell said. “He was my role model. I remember my first golf lesson with him when I was 10, and I was shaking. But I loved my lessons with him, and eventually I became his ‘cart kid’ and range boy at age 14, and then moved into the pro shop.

“I always looked up to him as a mentor and role model.”

Swanson left Purple Hawk 13 years ago and worked as director of business development at Minnco Credit Union for 12 years before his death last April.

“I remember Friday, April 2, was a nice day, and my dad said, ‘I think I’m going to be sick around 11 o’clock – I’ve got to go out to The Hawk and play,’” she said with a laugh. “He played a round, saw friends in the bar, and when he came home, he and I watched basketball together.

“The next morning he got up at the crack of dawn to play the Chaska course, which is where he grew up. So it was heartwarming to know his final round of golf was at The Hawk, and his final few holes were played on the course where he grew up.”

Swanson died from a heart attack while on the Chaska course on April 3, 2021. He and his wife had two children, Matt and Lauryn, but his influence extended well beyond his family.

“I kept in contact with Jon,” Grell said. “And when I came back to Purple Hawk, if I ever had a question, I ran it past Jon, because I was confident in his answer.”

Paul Lieser and his wife, Ruth, are members of Purple Hawk even though they live roughly 40 miles away in Spring Lake Park. The membership began because of Swanson, who took care of them when he was the club pro, then became Lieser’s partner in golf leagues at the course.

Lieser remembered a prank Swanson pulled during his time at Purple Hawk.

“Jon paired me with a guy who he said was named Leroy Smith,” Lieser said. “When we got to the second tee box, the guy showed me his golf club, and it said Kent Hrbek on it. So I said, ‘Did you steal those clubs from Kent Hrbek?’ And he laughed and said, ‘No, he’s my brother.’

“He wanted to stay under the radar, and Jon knew that. So he helped him out.”

Over the summer, Purple Hawk erected a large green-and-white leaderboard that includes Swanson’s name along with the quote, “Junior Golf is the future of our game.”

“It’s bittersweet, because it means Jon is no longer with us,” Dennis Anlauf said. “But we’re not going to forget him, and this leaderboard will help us with that.”