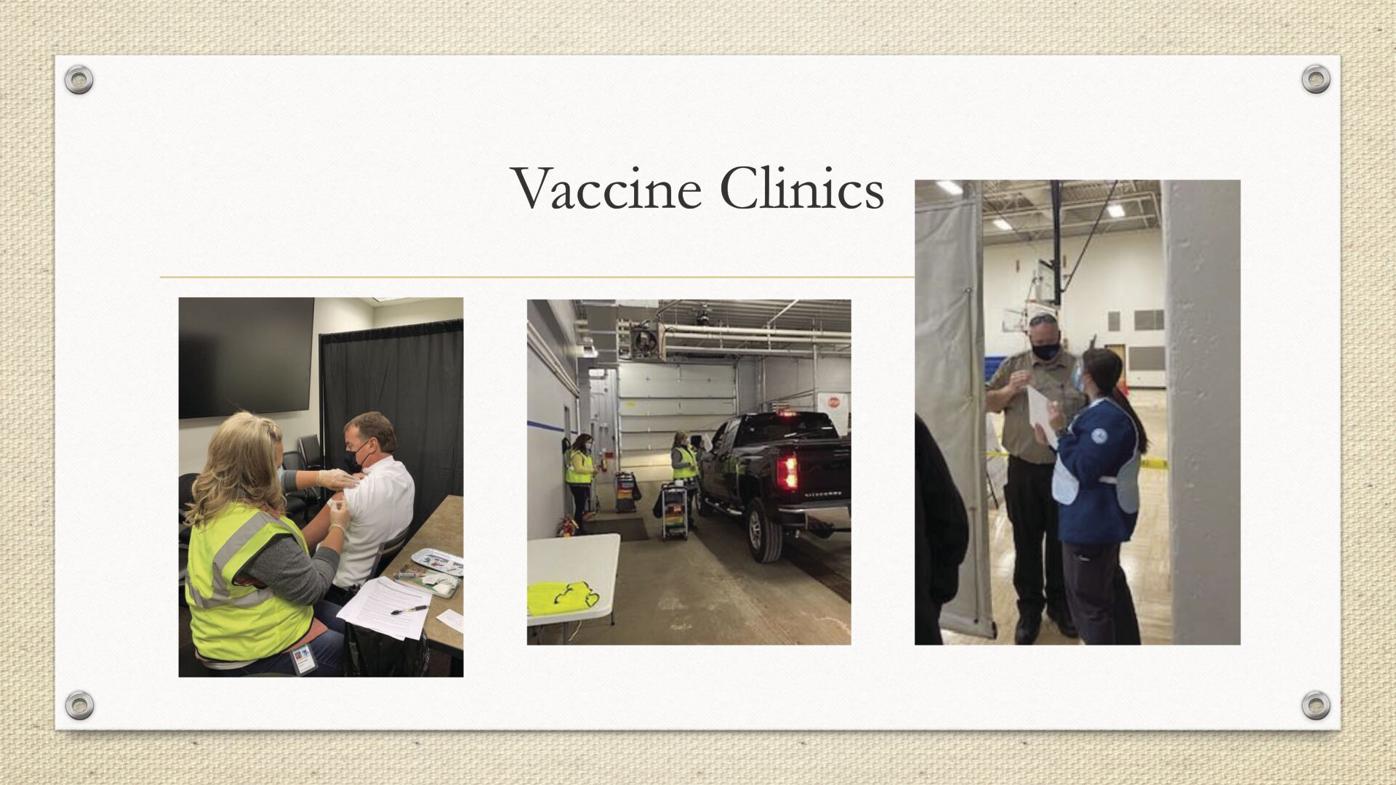 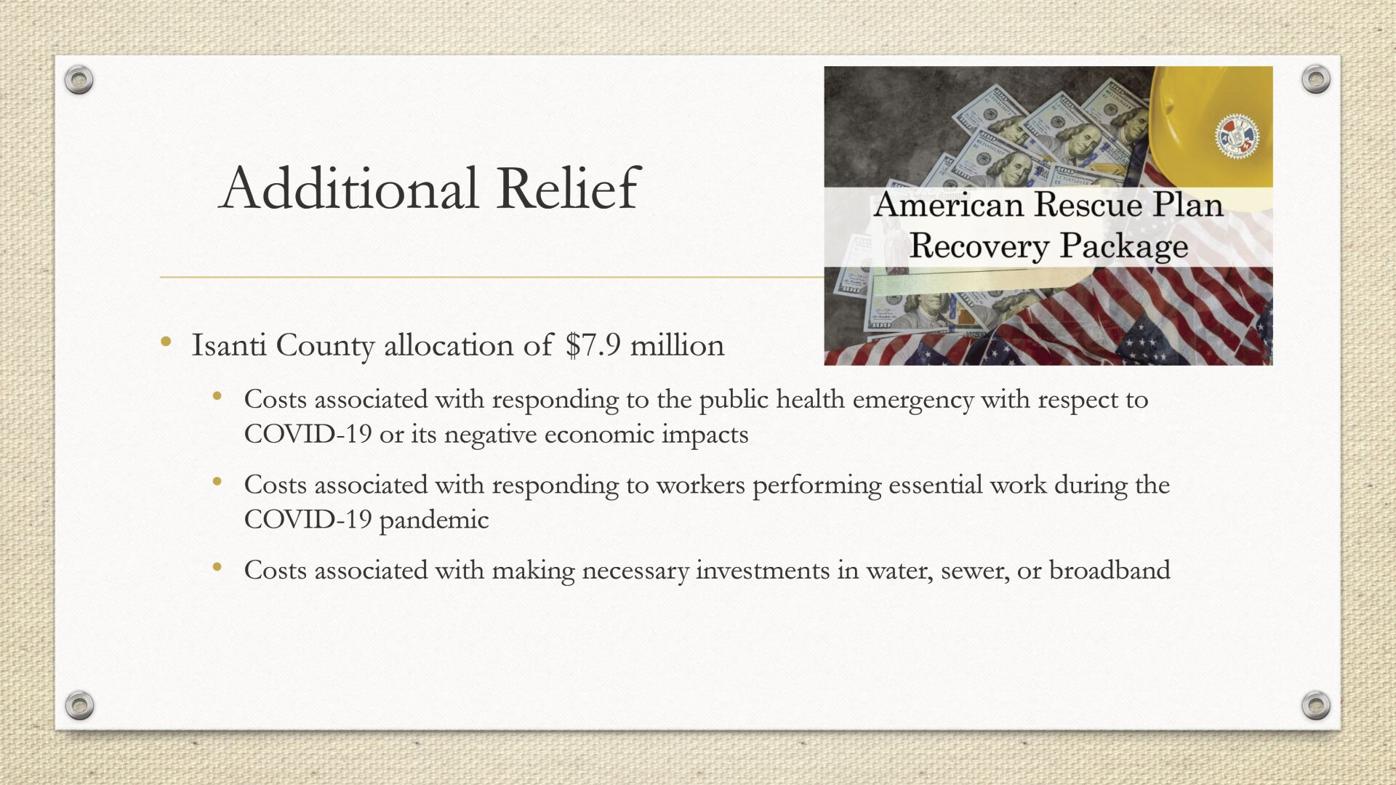 Continuing to vaccinate the residents of Isanti County against the coronavirus continues to be a priority for the county.

Lines grew up in North Branch and attended the University of Minnesota and then the William Mitchell College of Law. She spent 11 years practicing primarily insurance defense litigation in the metro area before becoming the human resources director for the Cambridge-Isanti School District in March 2015.

Lines started in her role as Isanti County administrator on Jan. 27, 2020.

“I was very happy there (Cambridge-Isanti Schools) and I would still be there today if Sheriff (Chris) Caulk had not sent me the job description of Isanti County Administrator,” Lines said. “I didn’t know what that job was but I read it and thought it sounded like an amazing opportunity.”

Lines had only been in her new position for a little over a month before the COVID-19 pandemic hit.

“I included in here ‘never let a good crisis go to waste’ because I do think a number of opportunities came along with the unfortunate pandemic. Isanti County’s role in the pandemic response piece was to be the public health resource for the county,” Lines said. “Public health has worked really closely with the schools, with the businesses, with the residents of the county to get the PPE that was needed and to make plans for reopening. The government center closed for a bit of time there. We declared an emergency here at the government center so we could get the safeguards in place, which I’m sure many of you did as well.”

Lines said due to no one’s fault, it was obvious there needed to be some changes made within the county after the pandemic hit, and she received approval from the County Board to have an organizational study completed that started in the summer of 2020 and was completed in the late fall of 2020.

“But one thing that became pretty clear to me as we started to respond to this pandemic was that there was a number of organizational challenges within the county,” Lines said. “With that study came some recommendations to change from 17 different departments into four or five different divisions. ... But I just kind of wanted to highlight the reason that the board made that decision in the middle of the COVID-19 response, was because it was kind of glaringly apparent that we needed better collaboration and just better experiences within county operations, which will then translate to much better customer service for the residents that need the county’s services.

“I’m super proud of the board’s support in going through with this organizational study and carrying it through,” Lines added.

Among the initial changes in January was the promotion of Isanti County Family Services Director Penny Messer to Health and Human Services division leader; this was the combination of the Family Services and Public Health departments.

“He will oversee the property and finance division, which will include all of our property transaction services, assessor, some of zoning, recorder and those offices as well as maintaining the driver’s license and passport counter as well,” Lines said. “The hope is that we provide more of a one-stop counter for someone who’s going to be coming into the county and needing any kind of property services.”

“I’m just excited that in the scope of one year, we’re making these decisions to move forward and modernize the county services, because many of you probably know things don’t move quickly in government, but we’re taking the opportunity to really push forward and take the next step toward a more modern process with better customer service at the end of the day,” Lines said.

Isanti County received $4.8 million in CARES relief funding and used $2.9 million for county infrastructure and gave $1 million toward small business relief, $300,000 to the public schools and $100,000 toward individual housing relief, which was administered through Lakes and Pine.

Lines explained there were three rounds of small business and nonprofit relief grant opportunities for county businesses. In the first round, 37 grants awards were given, up to $10,000 each; the second round of grants targeted businesses that were shut down due to the governor’s order and 41 grants were given in the amount of $5,000; and the third round of grants, given through the state of Minnesota, included the awarding of 77 grant awards, up to $15,000 each.

“We did all of us this internally, and so it took a lot of staff time and effort, but we were really committed to keeping these dollars local,” Lines said. “If we didn’t award these grants, we would have had to send it back to the state, and I’m sure they would have found good use for it, but definitely happy to keep that local.”

Holding vaccine clinics is really the focus for the Health and Human Services division, Lines said. She said the first clinics were held in the lower level of the Isanti County Government Center and then some were held in a drive-thru setting at the sheriff’s office. Most recently, the clinics have been held at the Cambridge Middle School.

“We are super thankful for the school’s partnership. Some of the school nurses are helping us out, and we’re using that facility, which has been amazing. Our public health team has vaccinated 6,700 people so far and that’s about 57% of the 65-plus population,” Lines said. “So we still have a way to go, but every time that they do a clinic they’re learning and adjusting and it’s really just a phenomenal accomplishment that we have this small team facilitating these large scale clinics.”

Lines announced President Joe Biden signed the American Rescue Plan Recovery Plan into law on March 12. While the numbers are still being finalized, Lines said Isanti County is estimated to receive $7.8 million in additional relief. She said the parameters to receiving funds are similar to those from the CARES Act funding and the county has until December 2024 to spend the funds.

Funds will be given for:

• Costs associated with responding to the public health emergency with respect to COVID-19 or its negative economic impacts.

• Costs associated with responding to workers performing essential work during the COVID-19 pandemic.

As for continued plans for growth, Lines highlighted:

• Continue to respond to the COVID-19 pandemic and the economic fallout.

• Collaboration and efficiencies with the goal of excellent customer service.

• Opportunities to better serve the public.

• Focus on staff development, with public service at the forefront.