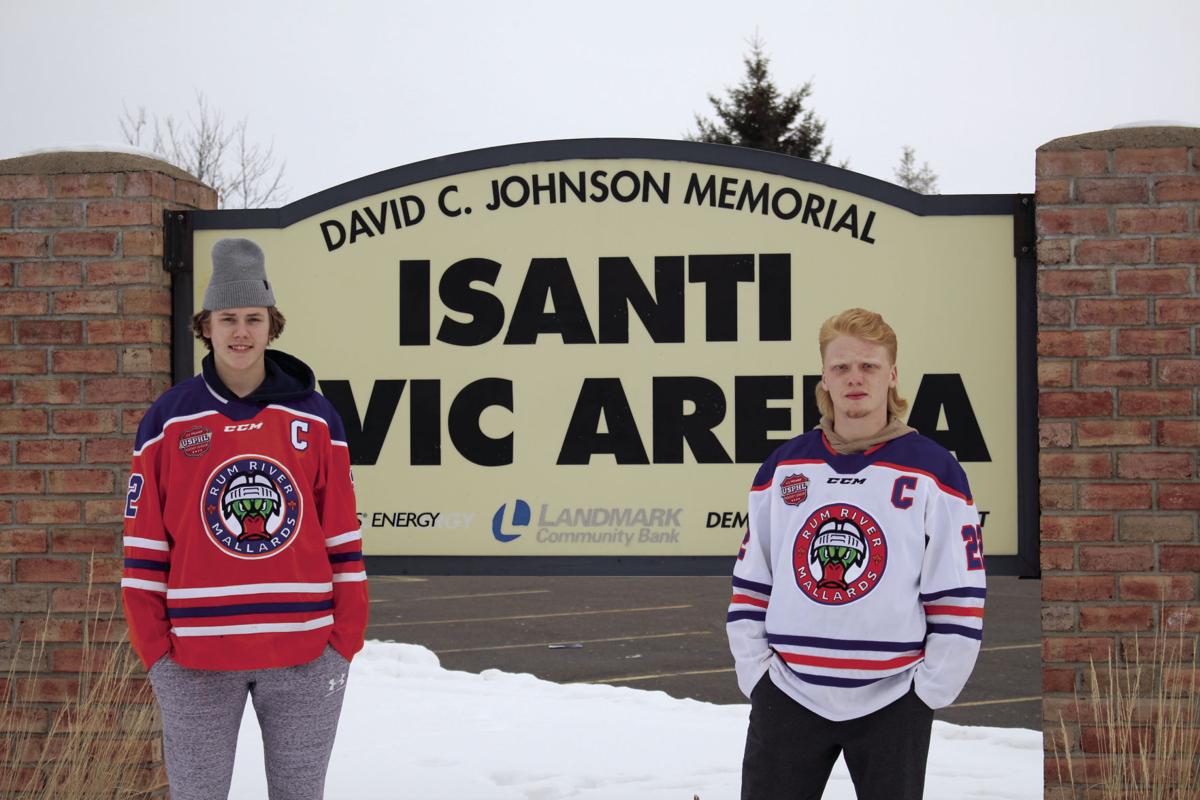 Cambridge-Isanti graduates Derek Becklin, left, and Jace Wilkinson did not have to travel far to play junior hockey with the Rum River Mallards. Photos by John Wagner 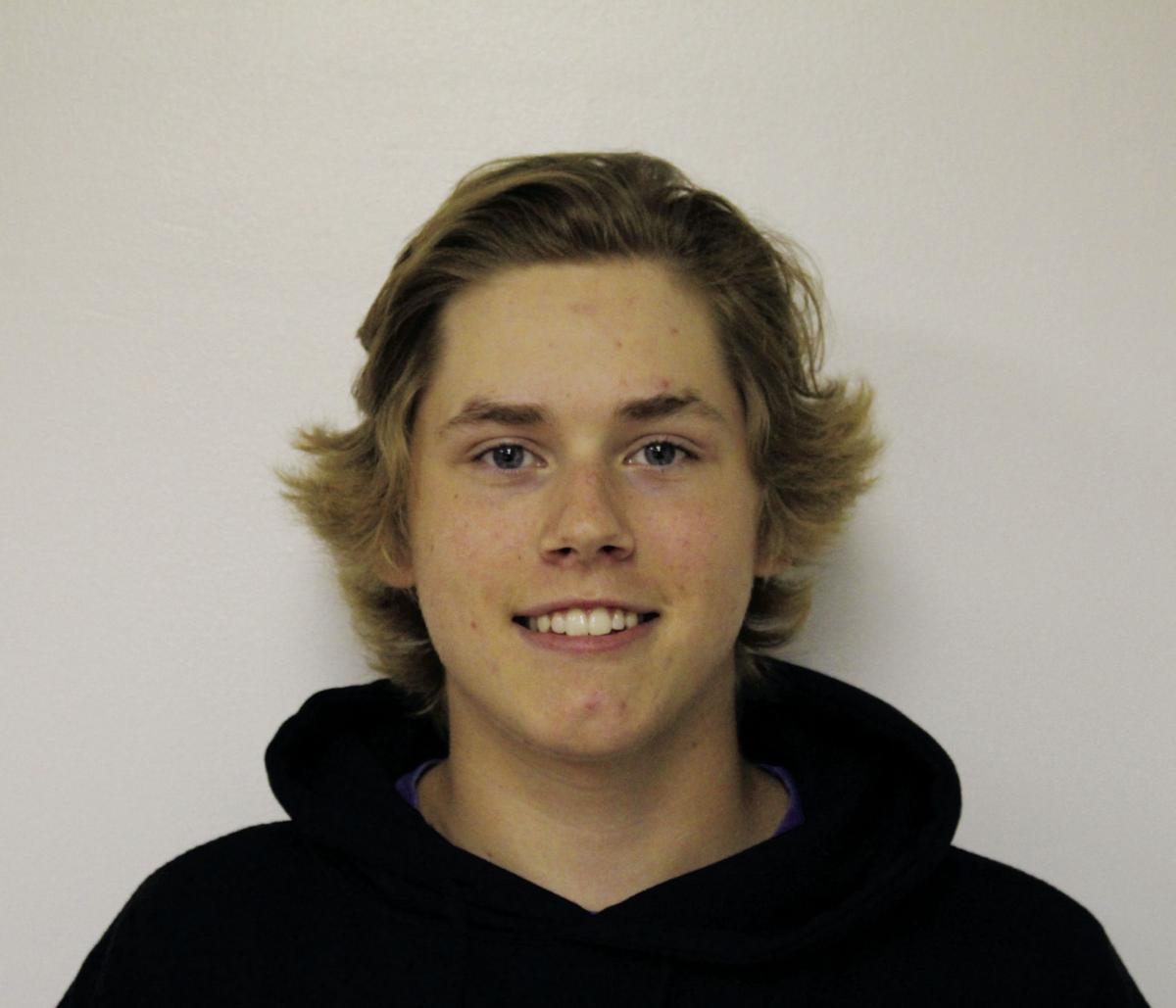 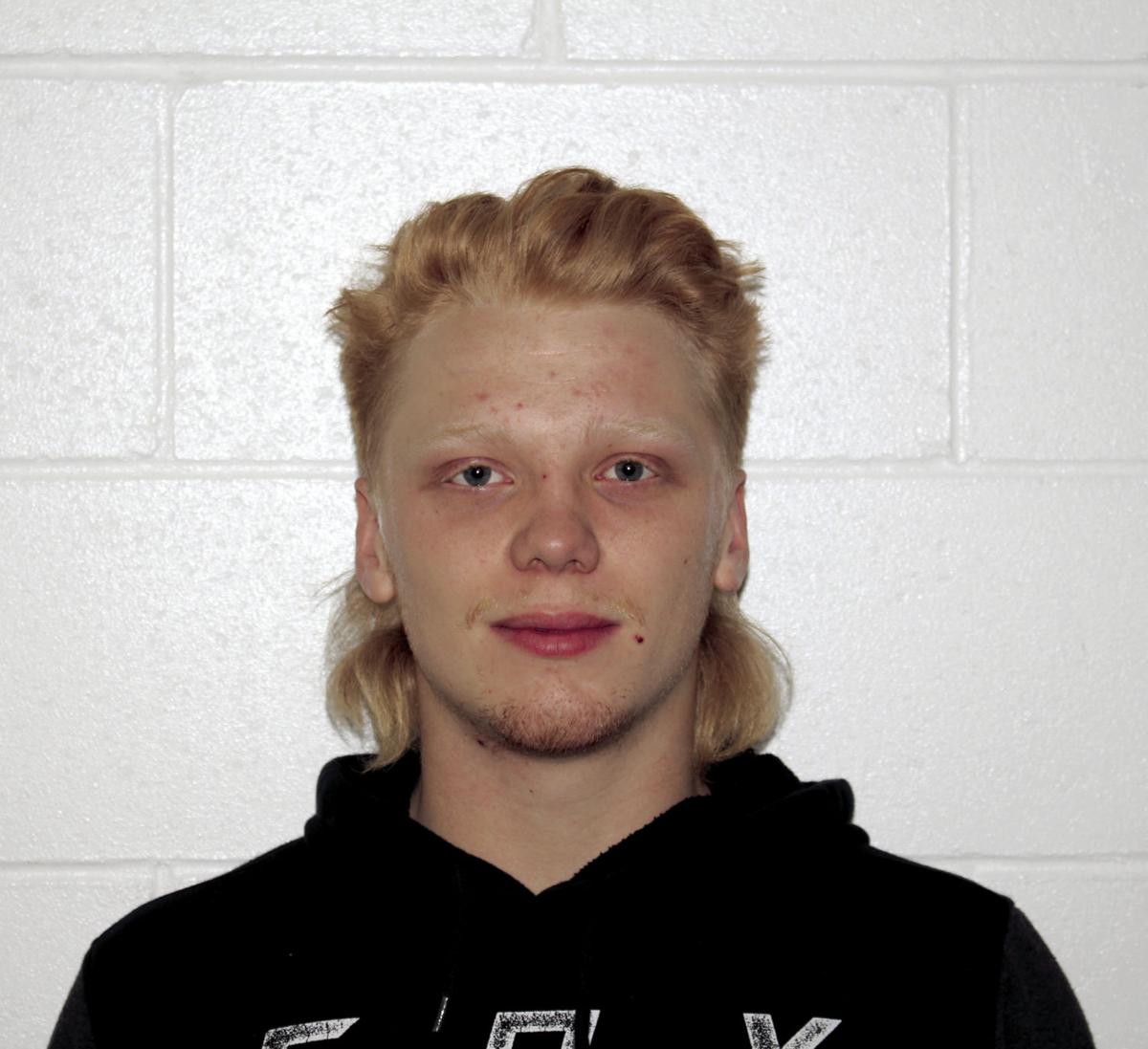 Derek Becklin and Jace Wilkinson did not have to travel far from home to play junior hockey. Then again, the two Cambridge natives do not have much ground to cover if they want to spend time together.

That is why they both have appreciated the opportunity to play for the Rum River Mallards, this area’s entry in the U.S. Premier Hockey League. Both Becklin and Wilkinson are key players for a team that has clinched a playoff berth in both seasons of its existence, while giving area hockey fans an exciting new team to watch.

Wilkinson agreed, adding: “It’s been our home rink for a long time now. And I enjoy it. I love this town, so I love this community.”

Different paths to the same goal

Becklin basically had no choice but to play hockey.

“When my cousin and older brother started playing hockey, I got dragged into it,” he said. “But I loved it. The first time I skated, I was 3 years old – and I didn’t need any help. The next year I signed up for hockey, and I liked it right away.”

Wilkinson did have a choice. And at first he chose to be a wrestler.

“But all my friends played hockey, so I asked my dad if I could switch to hockey,” Wilkinson said. “My dad said, ‘Are you kidding me?’ But he said yes, and I fell in love with the game.”

Both played football and hockey at Cambridge-Isanti, but neither planned to play hockey after graduation. In fact, Wilkinson had decided to play football at St. Thomas before a knee injury his senior year wrecked that plan.

“I tore all three tendons in my knee and I chipped some bones because of the impact,” he said. “I was told I would never play competitive sports again, and it took me a full year to recover completely.”

In the summer following their 2018 graduation, they heard that Isanti was getting a junior hockey team that would be called the Rum River Mallards. So Becklin and Wilkinson went to the rink for a “tryout” that spring.

“The coach at that time wanted a few local guys to get the team rolling,” Becklin said. “So we skated around a few times, and the coach said, ‘You can play on the team.’ No game, nothing.”

While Wilkinson’s knee had healed, he admits he was not prepared for a tryout.

“I had gained 40 pounds because of bed rest – I was out of shape,” he said. “I puked at my first practice. But the coach told me not to worry, that I would get into shape.”

“I knew about junior hockey, but I didn’t follow it and didn’t know much about it,” he said. “In my first game, I quickly saw it was good hockey. It was a lot faster than I expected; it probably took me about half of the season to get comfortable.”

Meanwhile Becklin fought for ice time at forward and collected 13 goals and 22 points in 42 contests.

“I was one of the younger guys, and the team had a lot of veterans who had been around for a while,” Becklin said. “I was trying to fill a role, both on the ice and off the ice, as someone to get the boys excited and fired up and not let them get down.

“I knew I wasn’t one of the top guys, so I tried to not get mad at that. I just tried to fill that role as best I could.”

Both Becklin and Wilkinson set a goal to become a better player when they returned to the Mallards this season.

“I wanted to be on one of the top two lines, play on the power play, things like that,” Becklin said. “I knew I would also have to be one of the leaders, so I had to step up.”

He already has surpassed his goal total from last season with 14, and now has 28 points in 40 games. What’s more, Becklin said he feels he is a different player on the ice.

New coach Triston Jensen, who joined the team last December, likes what he has seen in Becklin.

“He’s a ‘glue’ guy who keeps everything together,” Jensen said of Becklin. “He creates play, even at times where there’s no play to be made. He can score goals, make passes, and deliver hits. He’s one of our top penalty-killers.”

Meanwhile Wilkinson has increased his ice time by increasing his versatility. He began the year as a forward, but has switched between the frontline and the blueline all season long.

“It’s what the team needs,” Wilkinson said. “If we have injuries to our forwards, I can make a difference at forward. I end up jumping around, but it’s for the team. I was excited to do it, because I felt a lot more confident on the ice. I had gained muscle, and I felt ready to play. Instead of a rehab year, it’s been a year where I’m trying to advance to another level.”

Jensen appreciates that versatility, as well as Wilkinson’s willingness to do whatever it takes to help his team win.

“I can put Jace in any situation and feel comfortable that he’ll have success. He makes my life easy,” Jensen said. “He has the heart and the desire to get better. Not many guys have the work ethic to push, push, push. And he’s a steady hand on the back end. Even on an off night, he’s going to give me a good night.”

This year both Becklin and Wilkinson also have proven to be team leaders. Wilkinson has worn a captain’s “C” on his sweater for most of the season, while Becklin has recently been named a team captain.

“I could ask Jace to do anything, and as a leader he would go out and do it,” Jensen said. “He can amp the team up on the bench, or he can deliver a big hit. And he’s a good guy to follow just by watching, on and off the ice.”

Becklin said he appreciated the move by Jensen to award him a captain’s “C.”

“I knew I was already a team leader, but that was still nice,” Becklin said. “It means something. But I haven’t changed anything; I’ve tried to be a leader of the team all season. But getting the ‘letter’ felt good.”

Both Becklin and Wilkinson hope their time with the Mallards will be a springboard to college hockey. But both said they will never forget the many people in this community who have supported their careers.

“I want to thank all of the coaches that I’ve had,” Becklin said. “I really need to thank my parents, Brian and Michelle. They travel to all of our games and support me all the time. And I really appreciate all of our fans.”

Wilkinson said his list of people to thank starts with his father, Eddy.

“My dad has always been my biggest supporter,” Wilkinson said. “And I want to thank my mom, Jorie, for supporting me as well.”

Jensen said hockey fans in this area should appreciate the contributions of their hometown heroes.

“We hope that Derek and Jace remain cornerstones to build this team from within the community,” Jensen said. “We hope that younger players who come to our games and see those hometown kids realize that the Mallards can help them realize their dreams to play junior hockey and eventually college hockey.”

The Mallards beat first-place Hudson 5-4 in overtime on Friday, Feb. 7, then rolled to a 9-2 victory over Rochester the following evening before completing the weekend sweep with a 4-3 win over the Minnesota Mullets Sunday, Feb. 9.

On Friday against Hudson, Becklin got Rum River on the board with a goal at 8:59 of the opening period, but the Mallards trailed 4-1 late in the second period.

Vladimir Fadeev’s goal with just 32 seconds left in that period started the rally, and the Mallards got goals from Sam Voss and Akhmed Malsagov in the third to force OT.

In the extra session Fadeev scored with just 49 seconds left to make a winner of goalie Austin Bartell, who finished with 37 saves.

Saturday’s game saw Rum River explode for three goals in the opening period as Malsagov, Scott Moyer and Matthew Kochanowski found the back of the net.

Tanner Hallett and Peter Meyer scored in the second period, and a four-goal third-period outburst helped Rum River pull away. Meyer, Fadeev, Malsagov and Bowie Starks notched the goals, and Jason Cooke finished with 41 saves in the win.

On Sunday Gage Rennox and Meyer scored to give the Mallards a 2-1 lead after one period. Moyer and C.J. Hoyt scored in the second, and Armand Charland made 18 saves to secure the victory.

The three wins improve the Mallards’ record to 23-16-1 on the season and lift them into fifth place in their division with 47 points. With four games left in the regular season, Rum River is just 4 points behind the Minnesota Moose in third and just 1 point in back of the Minnesota Blue Ox in fourth.

This weekend Rum River will again play three games in three days, including two contests at the Isanti Ice Arena.

On Friday, Feb. 14, the Mallards will play at Rochester in a 7 p.m. start. The next two nights Rum River will host second place Wisconsin Rapids, with Saturday’s game beginning at 7:05 p.m., followed by a 5:15 p.m. opening draw on Sunday.