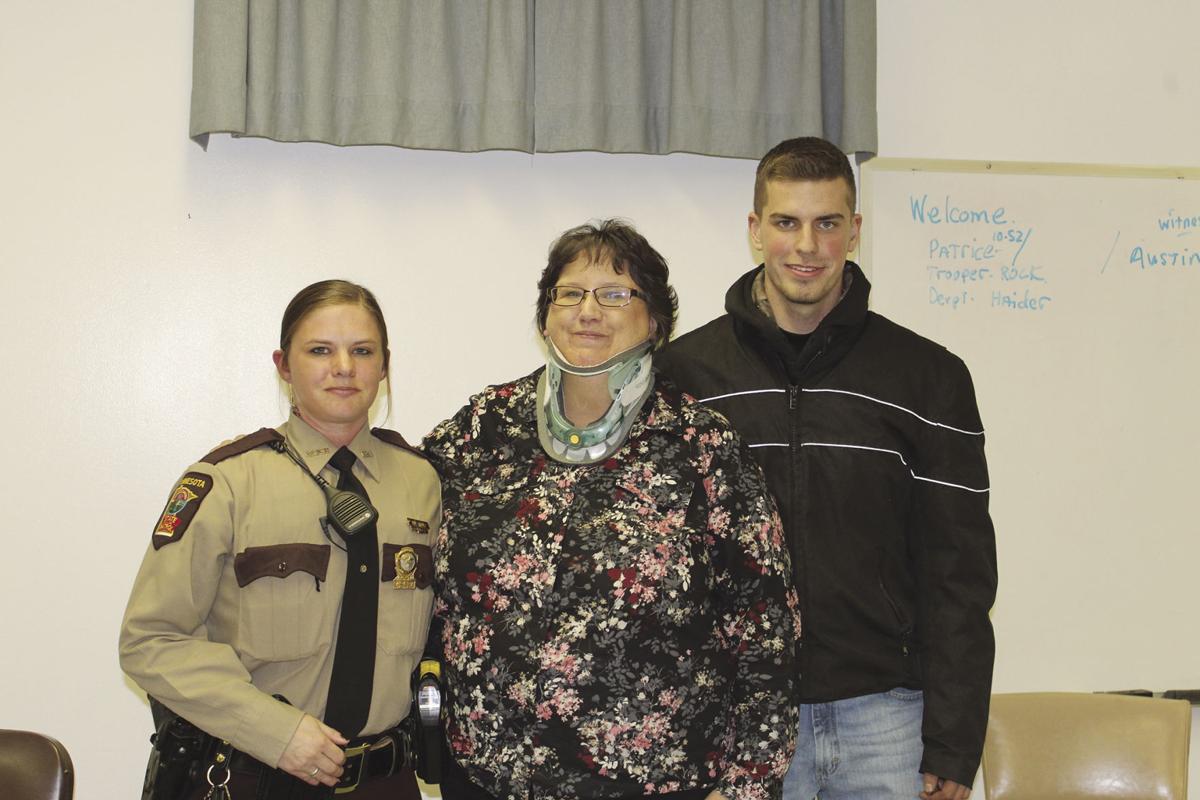 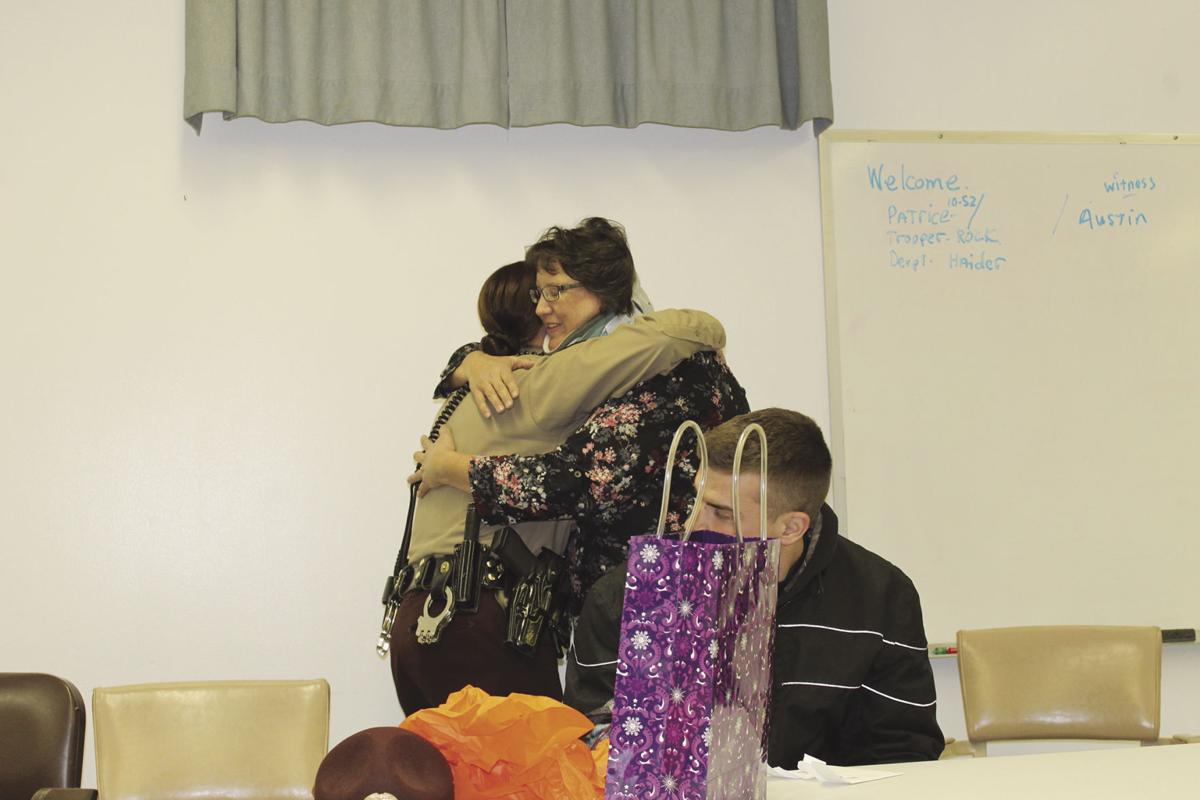 Patrice Palmer had no idea what horror was in store for her when she was driving northbound on Interstate 35 on a late Friday night on Nov. 8 after a visit with her son.

“I was driving home to Pine City, and it started raining when I got to North Branch, and my husband had called me and said that it was really icy out closer to home and he wanted me to be careful,” Palmer said. “So I slowed down and just after I passed Harris, I was going past a semitruck. I moved over and my car totally went out of control.”

Palmer describes the incident as happening so fast, but in slow motion when her car went into a spin toward the median, but her vehicle ended up going backward into the ditch and rolled over at least once.

“I remember calling out to God, saying, ‘Help me Jesus!’” Palmer said. “I remember thinking, ‘Is this going to stop.’ I felt the bushes hit the car, and I then I was upright hanging in the air. I had my seatbelt on. I was hurting really bad, and I put my hand on my head, took it away and it was full of blood. I was so afraid I was going to die.”

Palmer said it did not seem that long after the accident when she heard a knock on her car window. It was her hero, Austin Gardner, a 20-year-old man from Blaine who was driving to Pine City to his parent’s house in Pine City to do some hunting.

“I was just driving by and didn’t see the car at first. I just saw the lights flashing in the ditch. Nobody had stopped, so I figured I should, and it was probably the best decision I’ve made,” Gardner said. “Seeing the condition of the vehicle and just seeing how much blood was inside the vehicle, well, I’d never been in that situation before and I don’t regret it.”

Gardner immediately asked Palmer if she had called 911 and she said, “No.”

“After Austin called 911, I asked him to call my husband. It was weird that I was so alert and I could tell him my husband’s name and cellphone number. I thought I was going to pass out at this point and Austin told me that I was going to be OK,” Palmer said. “Then all of a sudden, on the passenger’s side, a Minnesota State Trooper (Kendra Rock) crawled in and she held my hand and put a cloth on my head. I then felt like I wasn’t going to pass out anymore. I had clarity and she just kept talking to me and kept me calm. Who knows how long I would have been stuck in my car if Austin hadn’t stopped and checked on me. He’s my hero.”

Next on scene was Chisago County Deputy Andrew Haider. Palmer then explained that it didn’t seem that long when the Rush City Fire Department showed up and was going to use the Jaws of Life to get her out of the car.

“One of the firemen came and patted my leg and said: ‘You’re going to be OK, and we’re going to get you out of here. It might be noisy, but you’re going to be OK,’” Palmer said. “They put a blanket over me and Kendra to protect us from any glass while using the Jaws of Life. It was loud, and the roof was suddenly off and the snow was falling. I’m not sure who, but someone said, ‘Now you have a convertible,’ which was so helpful at the time because it was so scary. Kendra kept telling me I was going to be OK and they know what they’re doing.”

After the firemen carefully got Palmer out of the car, they transferred her to an ambulance and Rock retrieved her phone, purse and computer from the car.

“The firemen were so nice. They slid a board under me and those guys were so careful with my head. And the ambulance guys were so awesome and helpful too,” Palmer said. “I don’t know who made the decision to have me go the Regions Hospital, but that was the best because I had a little head trauma and they knew exactly what to do. I was there for four days and still have some recovery to do.”

Gardner waited until Palmer left the scene and later visited her at Regions Hospital. Palmer’s husband, Mike, took Gardener out for pizza, and according to Palmer, Gardener just wanted to make sure she was fine.

Palmer injured her second thoracic vertebra (T2) and suffered a mild traumatic brain injury and a cut on her head that required six stitches. She was told she would have to wear a neck brace for at least six weeks.

“It’s not easy recovering, and it’s going to be a long road. My back is still sore, along with my shoulder,” Palmer said.

“The best thing for Patrice was she was far enough off the road where she probably wouldn’t get hit,” Carlson said. “It’s a huge learning tool for us. Patrice reached out to us and talked to us. It is good therapy for you as a patient, and the best thing for us is to talk about it and learn from it. We all work together and we all have the same goals and expectations.”

Palmer agreed with Carlson and expressed admiration for the Rush City Fire Department, Rock and Gardner. She said they all helped her to be strong in a terrible situation and saved her life.

“Thank you all so much. I don’t even have the words to tell you how much I want to thank you for saving me,” Palmer said. “My husband, family and I are just so grateful because I could have died, and you all were so awesome. You do such an amazing job. I really appreciate it and I will never forget you all.”

Palmer’s children created a GoFundMe page to help with bills and a new vehicle. If anyone wants to help, go to www.gofundme.com and search for Patrice Palmer.