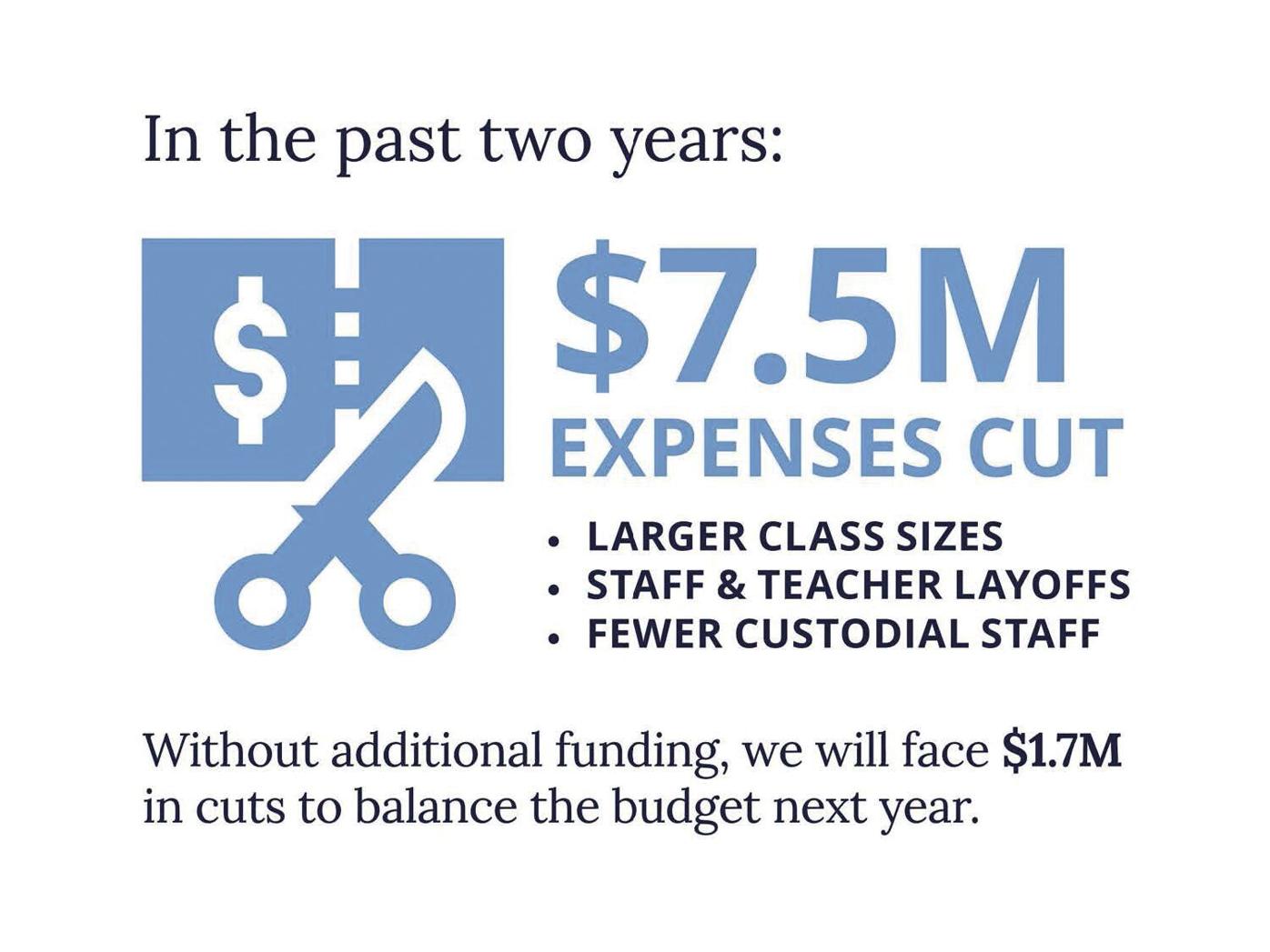 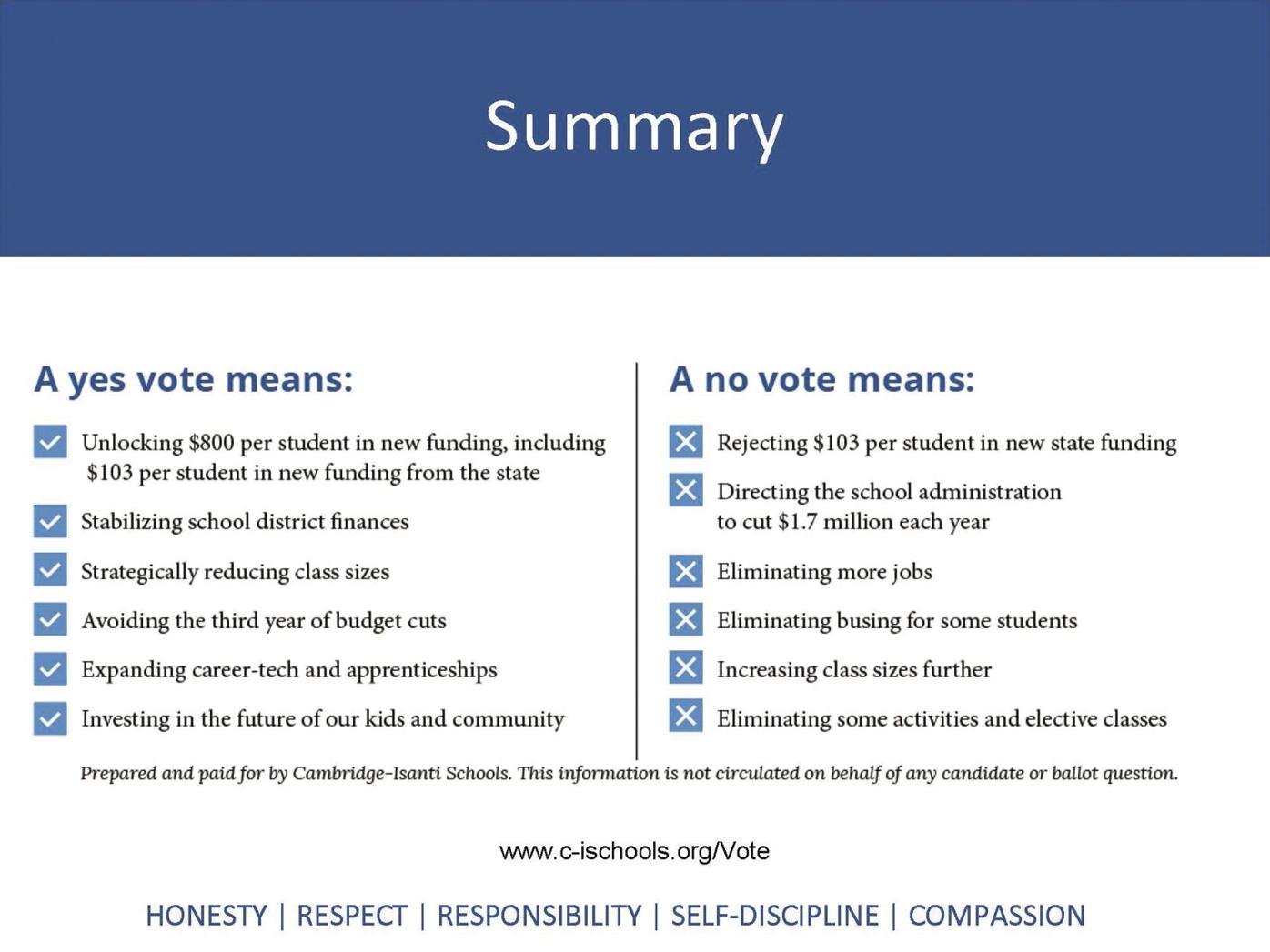 Cambridge-Isanti School District administrators are hoping the reasoning behind the decision to put an operating referendum on the Nov. 3 general election ballot has been shared with the community.

Voters within the Cambridge-Isanti School District will see the operating referendum question on their ballot and will have the opportunity to vote either “yes” or “no” on the ballot question.

During the Cambridge-Isanti School Board meeting on Oct. 22, Superintendent Nate Rudolph explained he and Director of Finance and Operations Chris Kampa have attended over 60 small group and backyard gatherings to inform voters about the operating referendum.

“It’s been really, really enjoyable to be able to have connections with our community, be able to share our story and process questions,” Rudolph said. “Our presentation at this day and time is much different than it was a month ago. As people have asked us questions, you’ll see some of the most recent questions that we got, we’ve changed our presentation to make sure we are answering those questions along the way.”

“Our goal over the last month and a half is ... we can’t tell people how to vote within our positions, but we do ask that people are informed and they understand what it is they are voting for or not for,” Rudolph said.

Rudolph explained a Q&A listing of questions relating to the referendum and more information about the referendum can be found on the district’s website, www.c-ischools.org/Page/477.

If the referendum does not pass, Rudolph explained the district will face $1.7 million in cuts to balance the budget for 2022. The district has cut $7.5 million from its operating budget in the past two years, which has led to larger class sizes and the elimination of 90 jobs.

Kampa noted the district is on the lower side of its per pupil spending compared to neighboring districts.

“We recently obtained data of expenditures per student of 12 local districts — these are our neighboring districts and this is our benchmark — and as of 2019 we were the fourth lowest-spending district on that list on a per student basis,” Kampa said. “And now because it’s 2019, that’s the last year audited data was available, and that was before the $7.5 million in budget cuts, so we think when the updated data is released, we would expect to be lowest on that list on a per pupil expenditure amount.”

Rudolph reiterated the reason why the district needs the referendum.

“This is not an expenditure problem; we can’t cut our way out of this scenario. This is a revenue problem, and the only way to handle it in this moment, when our state is facing a $4.7 billion deficit, is we need a local solution, and so that’s what we’ve been talking about recently,” Rudolph said.

Rudolph mentioned a common question he has heard is if the referendum will be used to build any new school buildings.

“This is an operating referendum, so these funds are only used to operate, and in fact we can’t build brick and mortar through this,” Rudolph said. “This will not be used for any new buildings; this is about operations.

One other question Rudolph clarified is that taxpayers will not have to write a $800 or $1,200 check when they go to the polls on Nov. 3.

“It is really important to us, and another really good reminder, that our community needs to know the story,” Rudolph said. “Because if I go to the voting booth and I see $800 or $1,200, I may assume that I have to pay $800 or $1,200, that is not the taxpayer impact. That’s the amount of revenue that the district in all will be able to pull in per student. That’s the revenue side, that’s the amount that the district is going to get, not the taxpayer impact.”

Rudolph explained the benefit from the state the district will receive if the referendum passes.

Board Member Lynn Wedlund thanked Rudolph for all his communication efforts regarding the referendum.

“As a board member I could not be more grateful for all the upbeat, clear, concise information that you’ve passed out to people,” Wedlund said. “You’ve gone everywhere, you’ve talked to everyone, you’ve answered the same questions aI don’t want to guess how many millions of times, and so as a board member I’m so grateful to have a chance to be able to give this back to our kids and have us in a stable financial condition again.”

Rudolph said providing information to the community about the referendum has been a great chance for him and Kampa to get back into the community, talking to district residents.

“Although it has been a journey, so many times that Chris (Kampa) and I found ourselves in the evening and just said this is one of the best parts of our day. We got to sit with our community, answer questions, share our story, usually in a lawn chair, and tell our story. It seems odd with a referendum campaign, but that has been really, really enjoyable to be able to make those connections within our community, we have such great people,” Rudolph said.

Board Member Aaron Berg thanked the community groups that have been campaigning in support of the referendum.

“We would be remiss if we missed the opportunity also to thank our community groups that are in support of the referendum and doing all the things that they’re doing,” Berg said. “We won’t have another board meeting before the election, so we need to make sure we appreciate their effort as well.”