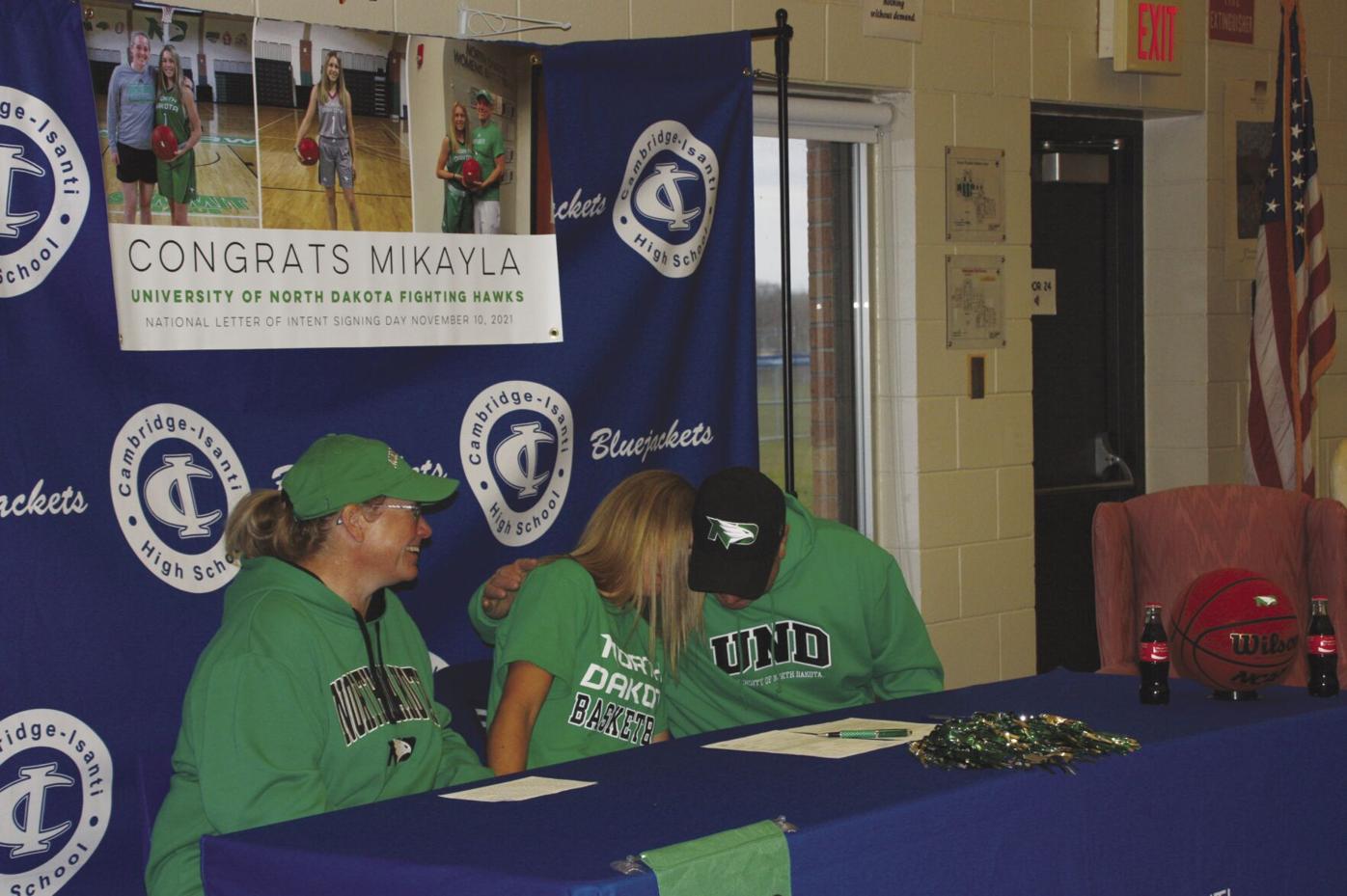 Mikayla Aumer embraces her father, James, following his comments about how proud he is of his daughter, while holding the hand of her mother, Jennifer. Photos by Rachel Kytonen 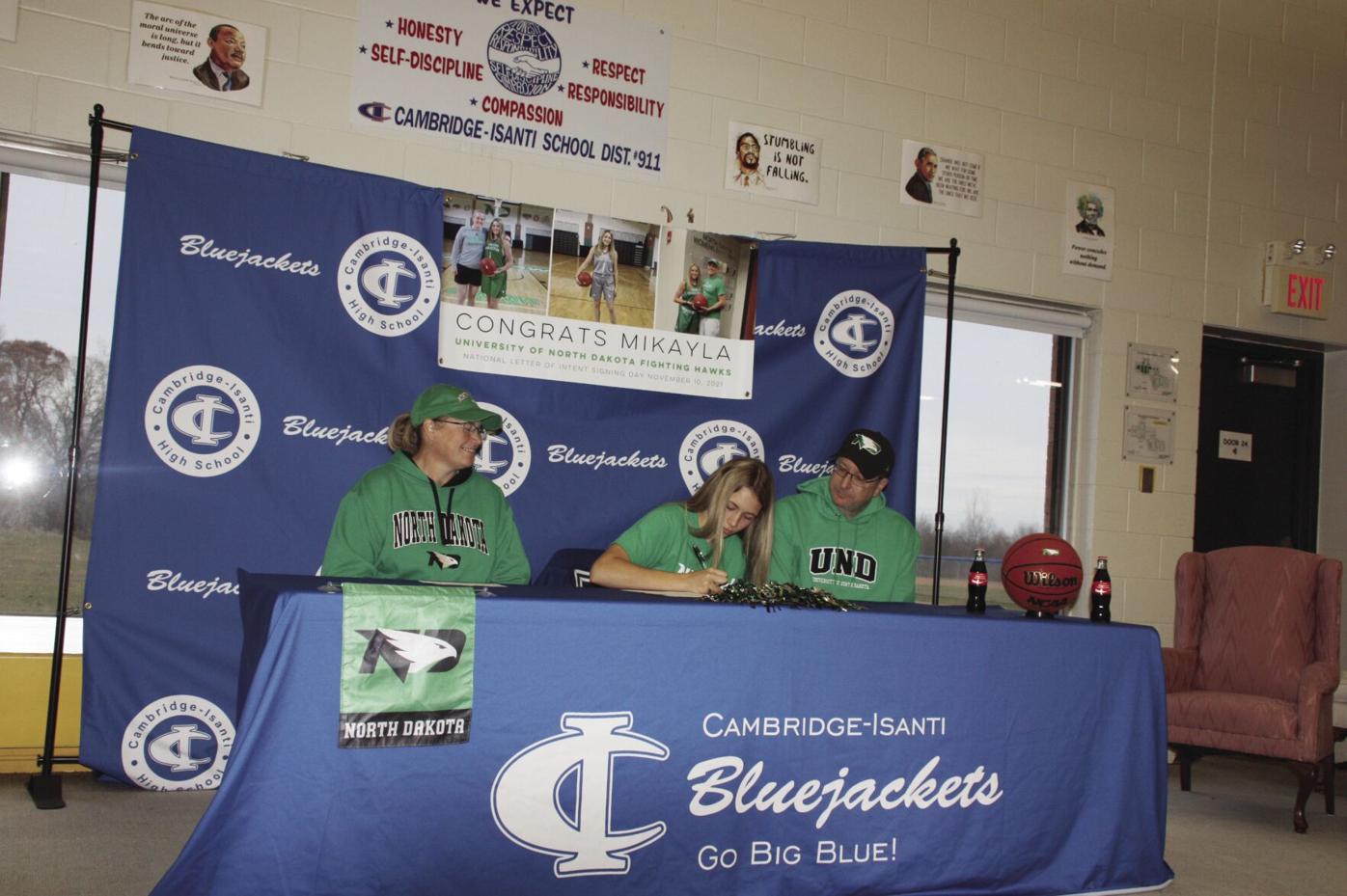 With her mother, Jennifer, and father, James, by her side, Cambridge-Isanti High School senior Mikayla Aumer signs her national letter intent to play basketball at the University of North Dakota during a signing ceremony on Nov. 10. 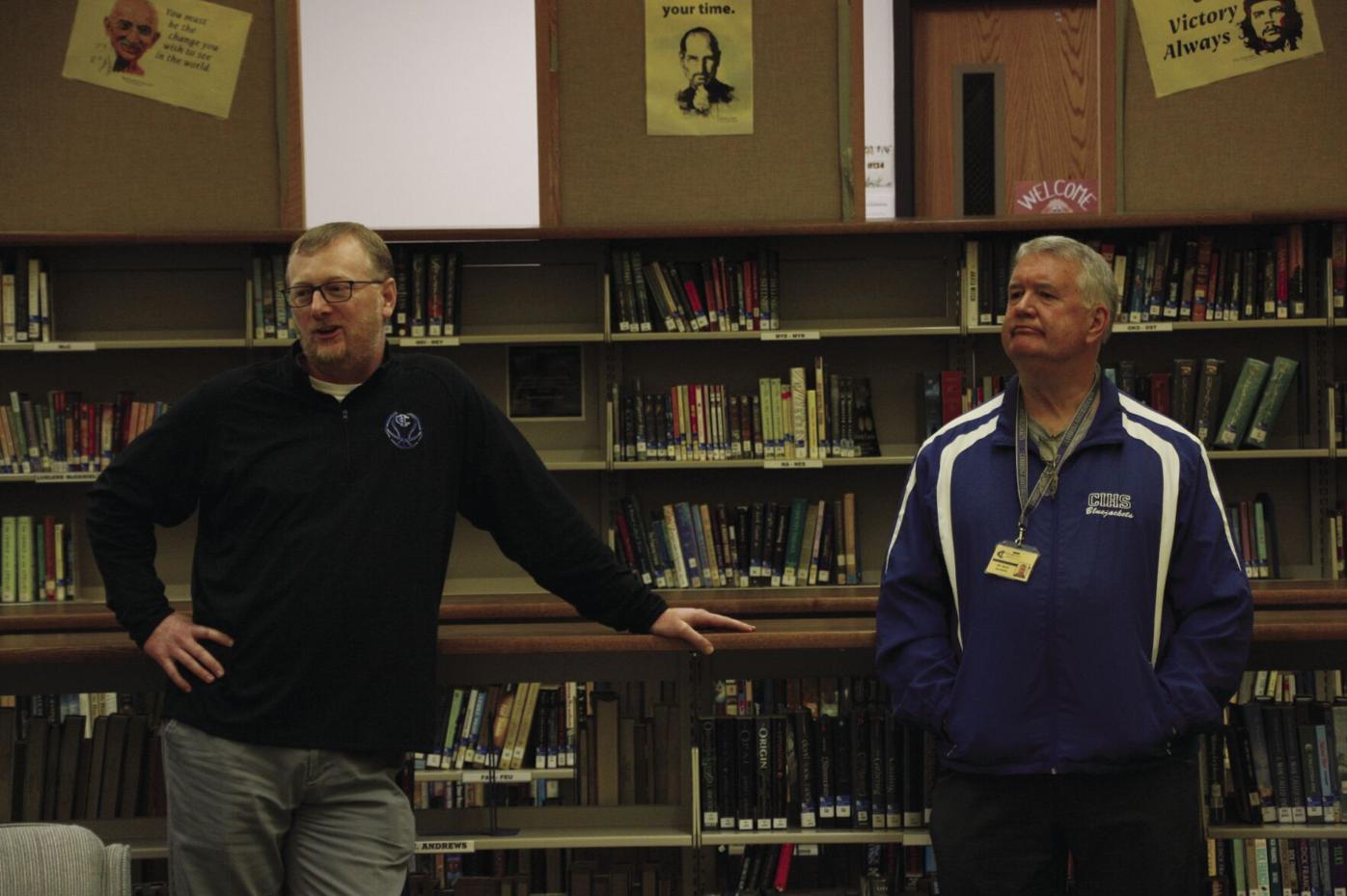 Both head girls basketball coach Jody Ledahl (left) and Athletics/Activities Director Mark Solberg talked about how rare of an opportunity it is for high school athletes to continue on playing into their college years.

Mikayla Aumer embraces her father, James, following his comments about how proud he is of his daughter, while holding the hand of her mother, Jennifer. Photos by Rachel Kytonen

With her mother, Jennifer, and father, James, by her side, Cambridge-Isanti High School senior Mikayla Aumer signs her national letter intent to play basketball at the University of North Dakota during a signing ceremony on Nov. 10.

Both head girls basketball coach Jody Ledahl (left) and Athletics/Activities Director Mark Solberg talked about how rare of an opportunity it is for high school athletes to continue on playing into their college years.

As a young girl, Mikayla Aumer had a dream. And on Nov. 10, that dream turned into reality.

Aumer, a senior at Cambridge-Isanti High School, signed a national letter of intent on Nov. 10, in front of a large crowd of friends, family and teammates, to attend and play basketball at the University of North Dakota.

Aumer is the first member of the Cambridge-Isanti High School girls basketball team, in recent memory, to sign a letter of intent with a Division 1 school.

“I couldn’t have done this alone — thank you all,” Aumer said after signing her letter of intent. “The love, the faith, the trust everybody’s had in me that I’ve had in you all. This journey hasn’t ended, it’s just the beginning. I’m so excited.”

Aumer said the University of North Dakota seemed to suit her.

“It feels like home, I know it’s where I’m meant to be,” Aumer said. “A big thing for me when I get on campus is I got to be a big piece as a leader right away. And I know what I produce. I would love to bring energy to the team, and I would love bring a love and a trust factor. I’m very excited to do that when I get there.”

“Starting as a freshman was a little difficult at first, but with the help and support of my teammates as well as coach Ledahl, (Jeff) Kurowski, Emily (Lindell), Mandy (Crittenden), that support system has always been huge,” Aumer said. “It helps build faith and trust within a team, and that’s always a big factor, especially if you have high goals of winning state, going to state. So that was a big part of my process, and I’m very thankful for that.”

Aumer’s mother, Jennifer Aumer, talked about the hard work and sacrifice her daughter has made to achieve her goals. She also thanked all of her daughter’s coaches, teammates and her family at the Verve Basketball Academy.

“Mikayla, every parent’s dream is to have great success for their child. We never could have imagined just how much success you would have in just 18 years. No matter what you have set your mind to, you have accomplished it. It has been your hard work, your sacrifice and your determination that has led you turning a dream into reality,” Jennifer Aumer said. “As a young girl, you dreamed of playing Division 1 college basketball. Over the last five years you have sacrificed greatly to make that dream come true. To say we’re proud of you is an understatement. In a little over seven months, the next chapter of your life will begin. You have new dreams, and have set new goals. And we know without a doubt, with your continued work ethic and determination, that you will accomplish them.”

Aumer’s father, James Aumer, talked about keeping the faith when striving for your goals.

“I’ve had opportunities to talk to Verve multiple times about just life in general and what it takes to succeed, and it truly does start with family and a community. You hear people talk about it all the time. Without a community, it’s really hard. There’s been a lot going on in the world and we try to make a better place of it. I just want to appreciate and thank all of you for being here today,” James Aumer said. “I didn’t write a lot on here, but without Him, this is not possible. I just wrote down ‘God,’ and you have to speak from the heart, so I’m speaking from the heart. You are family and it takes family to watch this young lady succeed. ... God has put each one of you in her life for a reason. And that reason is going to continue to grow and I’m really excited as a father. ... I just want everybody to know that to keep the faith in everything that you do. Love one another, show kindness to one another and continue to do so. ... But if you continue to work really hard, no matter what you’re striving to do, you can make things happen. And this is a testament to my daughter, because I know how hard she’s worked.”

Many others also gave much praise in honor of Aumer during the signing ceremony.

“We’re excited to host today for you. We celebrate you — great job,” Shane Weibel said, who is a teacher and head football coach at Cambridge-Isanti High School. “As a head coach, seeing kids sign, and as a father of a kid who signed, this is a really cool day. Mom and Dad, congratulations. This is a lot of hard work, a lot of rides, a lot of early mornings and things like that. But what a great accomplishment, and we’re super, super proud of you.”

Cambridge-Isanti High School Athletics/Activities Director Mark Solberg reminded Aumer of the unique company she is in.

“Congratulations, Mikayla — this is a big deal. So I’ll tell you how big a deal it is: For every 100 kids who start playing sports, 70% of them are done by the time they are about 13.2 years old. Then those people who graduate and continue to play sports, 2.2 of those 100 will ever participate in college; so this is a significant deal,” Solberg said. “Nobody gets recruited unless they’re a class act. Nobody gets recruited unless they’re a great student. And nobody gets recruited unless they have skills. And you worked exceptionally hard. You conduct yourself exceptionally well on the court. I see you in the hallway — you are very kind to people. You’re going to do a great job at UND, but before that, you’re going to do a great job for the Bluejackets this winter.”

“The biggest thing that Mr. Solberg talked about, about what colleges look for, they look for talent, that’s obvious, but to play Division 1 basketball, it takes a lot more than talent. It takes a support system. I was talking to Mr. Solberg a couple years ago, and his son played college football, and he was talking to college coaches, and they said they recruit support systems,” Gibbs said. “So to Mom and Dad, this doesn’t happen without you guys, and I think Mikayla would be the first person to say that. So a huge congratulations not just to Mikayla but to you two, and to everyone here — this is impressive, this is impressive. We’ve had groups this large but I’m not sure for one person before. So this support system, this support system you have behind you — I feel like I know you, so I can say it — this doesn’t happen without this group of people. This doesn’t happen without this group of people, so a huge congratulations.”

Aumer plays point guard for the Bluejackets, who are coached by Jody Ledahl.

“This is a very special day for Mikayla and her family, but it’s a special day for Bluejacket basketball also,” Ledahl. “Dr. Gibbs talked about attacking, and that’s been Mikayla’s mentality since I met her back in third, fourth grade in travel basketball. She was attacking the game of basketball and she’s attacked just life. And Mom and Dad have done an awesome job of instilling that and have done an awesome job of pushing her and advocating for her, and what a special day. It’s hard to follow two great speakers, but we’ve talked about what an amazing kid you are, just an all around kid, which is such a life skill. We’re here to celebrate basketball today, we’re here to celebrate you, but what an amazing kid. I’m so honored to have coached you; I’m so proud of what you’ve accomplished.”

Aaron Hanson, Aumer’s grandfather, spoke on behalf of him and his wife Sandy.

“Mikayla, we’ve followed you through your progress of basketball since the third grade. Last winter, we missed some games, but other than that, we haven’t missed any games, we’ve been at every one. And you’ve worked extremely hard to achieve the level of where you’re at in basketball as well as in your academics,” Hanson said. “Your grandmother and I are very happy with you and are very proud of your achievements. We’re looking forward to the next plateau, because there will be another one. You just keep working hard. We love you very much.”

Aumer has worked with coaches from the Verve Basketball Academy to enhance her skills.

“Wow. First of all, I want to say this: ‘I told you so.’ It’s been a long ride, a very long ride. I never thought that you couldn’t do it. The long talks, it’s been a long four years, and I’m never out of words, which is crazy, but I’m honestly so happy for you, happy for your family, excited for you to experience the next level,” Damien Lolar said, trainer of Verve Basketball Academy. “And just like I told you in eighth grade, you don’t stop until you’re ready to stop. I’m from a small town, and I know sometimes there’s not enough room or space to dream and to go to the next level, but if you want to play after this, just continue to do and focus and dream like you do. Your family is special, the city of Cambridge has been special, and I’m just thankful and I’m so proud.”

Grant McGinnis, from Prep Girls Hoops, scouts hundreds of players all across Minnesota.

“I remember the first day I saw Mikayla play, she had the worst jump shot and she couldn’t handle the ball anywhere near the level that she can today,” McGinnis said. “But there was just something about her I really liked, and on that day there became four believers, because there were only three at that time. But what you see here is what has helped her get there. Damien and the kids that train at Verve Basketball are a community and the school came as a community and everybody has come together to support Mikayla, and she’s given all that back.”