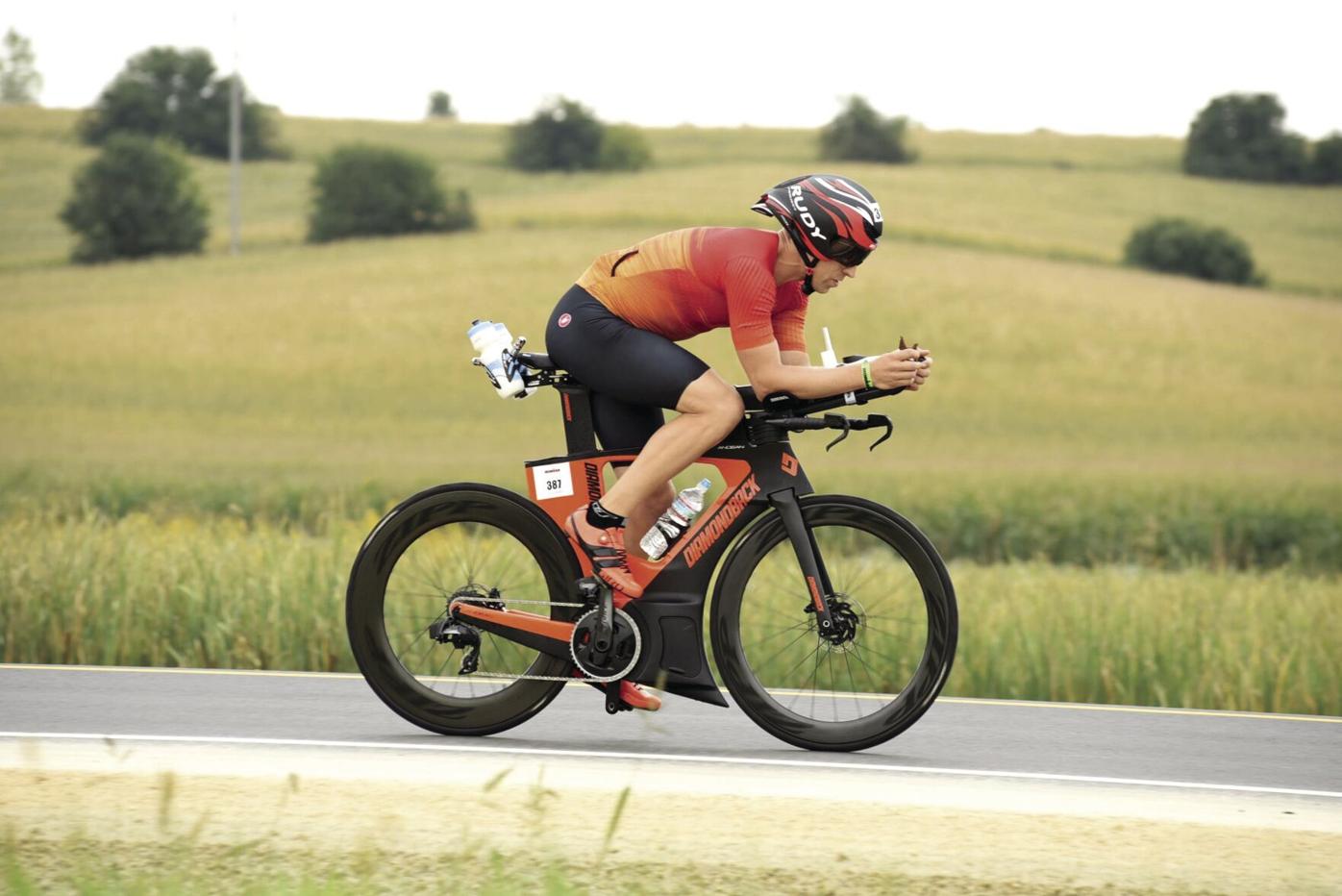 Nathan Budde cruises through the bicycle competition at Ironman Wisconsin. Because the bike course rises more than 5,000 feet in elevation, this particular Ironman is ranked amongst the toughest in the world. Photos submitted 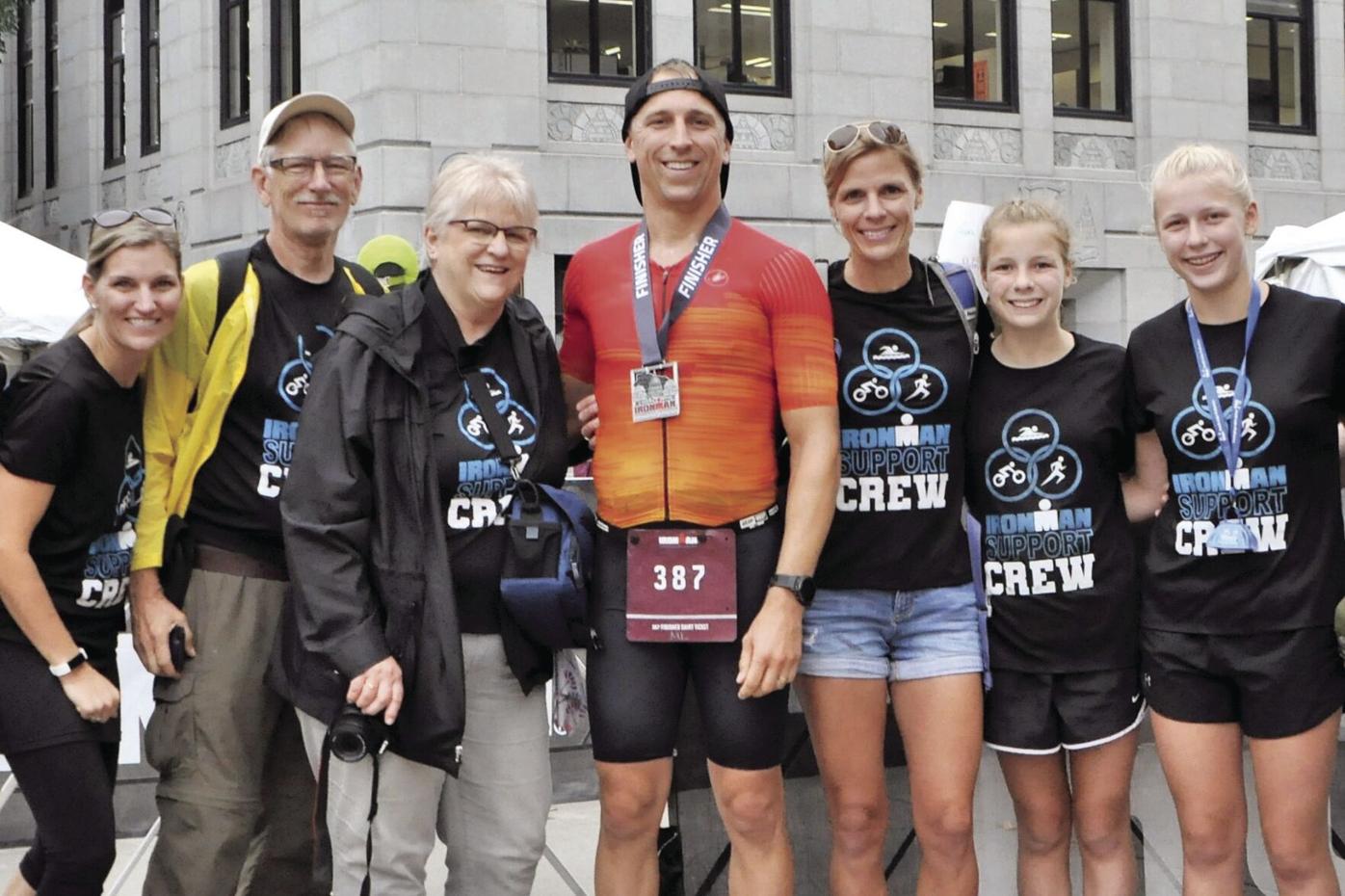 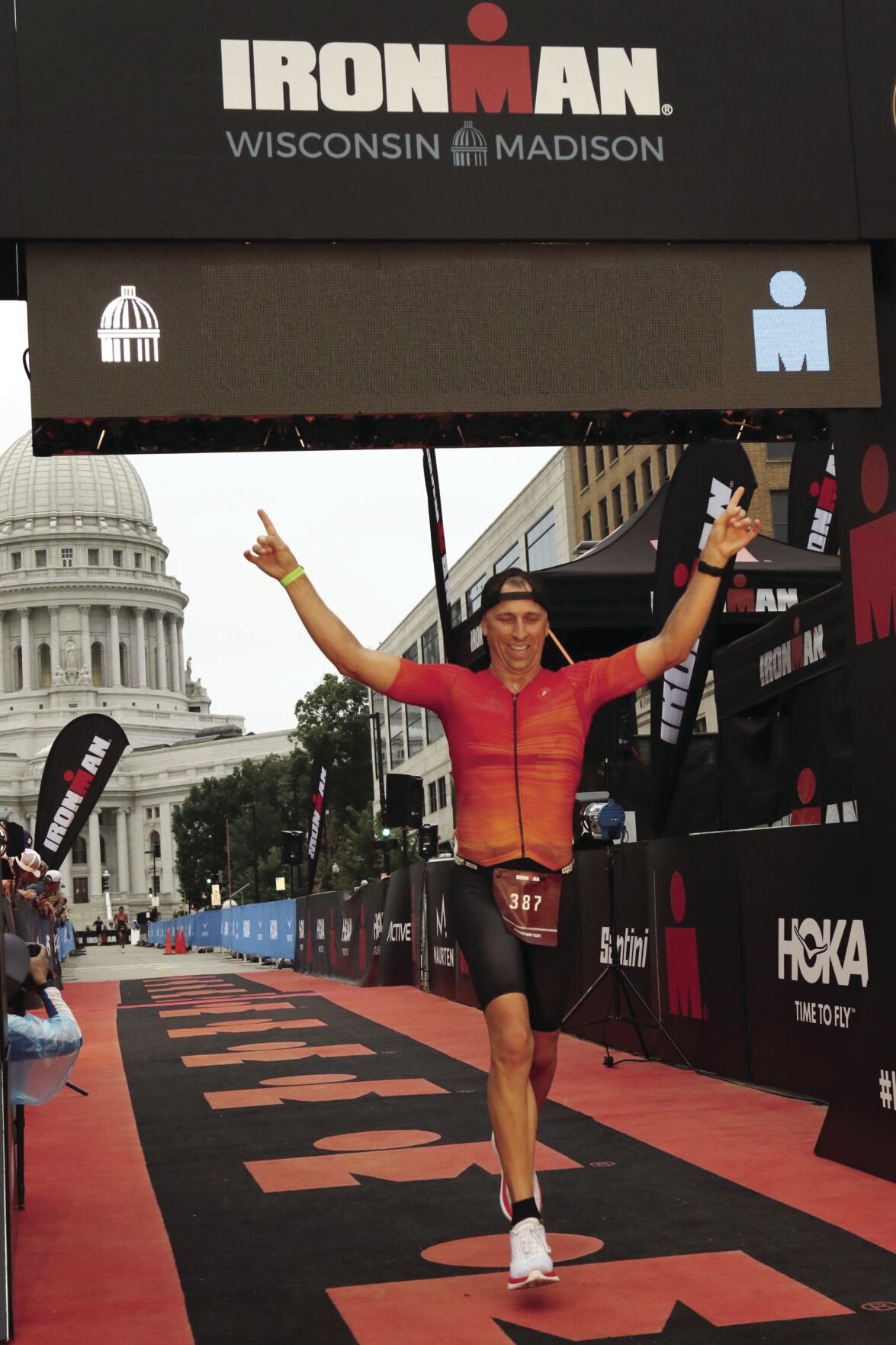 Nathan Budde finished Ironman Wisconsin in a time of 10 hours, 55 minutes and 14 seconds. The 45-year-old finished seventh in his age group and 77th overall amongst roughly 1,800 competitors.

Nathan Budde cruises through the bicycle competition at Ironman Wisconsin. Because the bike course rises more than 5,000 feet in elevation, this particular Ironman is ranked amongst the toughest in the world. Photos submitted

Nathan Budde finished Ironman Wisconsin in a time of 10 hours, 55 minutes and 14 seconds. The 45-year-old finished seventh in his age group and 77th overall amongst roughly 1,800 competitors.

Nathan Budde remembers sitting in front of the television while he was growing up, and often turning the channel to one of the strangest sports he could imagine.

“I still remember watching the Hawaii Ironman on TV, and seeing the stories of the individuals who would do it,” Budde said. “I would think, ‘Wow, maybe I could do that someday.’”

Budde was watching the early days of the triathlon, a competition where athletes swim, bike and then run a set distance all on the same day. The Ironman is the toughest of the triathlon competitions, since it involves swimming 2.4 miles, then enduring a 112-mile bicycle ride followed by a marathon run, with the marathon distance set at 26.2 miles.

But those thoughts floated the back of the mind for Budde, a 1995 Cambridge-Isanti graduate. He competed on the Bluejackets’ football and baseball teams while in school, then attended Augsburg and graduated in 2000 with a degree in physician assistant studies.

Budde met his wife, Sheri, while at Augsburg, and in a curious twist of fate, Sheri was a triathlon competitor in her hometown of Annandale. That was all it took for those dreams to return as Budde took the first steps towards exploring his childhood dream.

But it was not easy.

“I didn’t have a bike at the time, and I needed to learn how to swim better,” Budde said. “I borrowed an old bike from my father to complete my first race, which was in 1999.”

All it took was that one race to get Budde hooked.

“Those races relit the fire of competition I had when I was younger,” he said. “I wanted to push myself to see what I was capable of. It got my wife and I to continue excising on a regular basis, and it led to a lifetime of physical activity.”

But the route to competing in his first Ironman proved to be a longer distance than the race itself.

How do you practice?

His workday consists of 12-hour shifts, from noon to midnight, three days a week. When you include the commute to and from his home in Annandale – a one-hour drive each way – and the fact that his family includes two daughters, well, workout time is at a premium.

“I do quick workouts on days when I’m working,” Budde said, noting that a “quick” workout still takes an hour. “On my off days, I work out for six hours. So over the training, I averaged from 10-to-12 hours a week.

“I know that’s on the low end of training hours for an Ironman athlete. But for a father of two with a full-time job, that’s all I can offer.”

Budde said he splits his workouts so that he swims, bikes and runs three times a week. He averages 30-40 miles of running each week, along with 120 miles on the bicycle while swimming roughly 6-8 miles.

Budde said there is no way he could complete that grueling regiment without the help of others, especially his wife and his two daughters, 13-year-old Paige and 11-year-old Peyton.

“I have amazing support from my wife and my two daughters,” he said. “They knew this was a dream of mine, and they were very helpful through the training process. They would Rollerblade with me while I was running to keep me company. And I had friends in the community who would join me for my bike rides. I got a lot of support.”

When can you compete?

Budde has run numerous “sprint” triathlons – the distances for that type of event generally involves a quarter-mile swim, a 9-mile bike ride and a 2.5-mile run – as well as three half-Ironman races.

All that did was whet his appetite for more.

“I wanted to see if I had what it took to compete the entire Ironman,” Budde said.

So he signed up for the Mont-Tremblant, Quebec Ironman in 2016, but unfortunately had to withdraw because of a training injury.

“That just created more of a fire within me, just wanting to succeed,” Budde said.

So he again signed up for that race in 2020, only to have it canceled because of COVID-19. The race again was canceled in 2021, but this time the race sponsors offered competitors the chance to transfer their registration to one of seven Ironman events around the country.

One of those was Ironman Wisconsin, which is based in Madison and took place on Sunday, Sept. 12.

Budde leapt at the opportunity.

How did you do?

Budde said the one lesson taught to him by veteran Ironman competitors is that the event is all about pacing.

“You want to feel as if you just finished a warmup when you come out of the water, and you have to pace yourself on the bike because you have to save your energy for a marathon,” he said.

Budde said he followed that strategy well through the first two legs of the competition.

“The swim went without a flaw, and while Ironman Wisconsin is known for its hills – you climb approximately 5,500 feet in elevation during the bike ride – the bike ride went without a flaw, too,” he said. “On the run I tried to use an easy pace until the 13-mile mark, but around the 19-mile mark the day started to take its toll. I had to really concentrate to finish the race, but I was able to run the whole way and I lived to tell the story.”

“That surpassed my expectations,” he said. “I was hoping to go below 11:30, and I beat that by 35 minutes. I thought I would run nine-minute miles after that bike ride, and I averaged 8:25 per mile for my marathon.”

While Ironman Wisconsin was Budde’s first full Ironman experience, it doesn’t sound as if it will be his last.

“I’d love to do another Ironman in the future; next year I will do a half-Ironman. It will drive me to stay fit and active, and it leads to a good quality of life and good health.”

Budde is especially gratified that his daughters have embraced the fitness lifestyle he and his wife have adopted. Paige, an eighth grader in Annandale, already has completed several sprint distance triathlons, while sixth-grader Peyton is focused on distance running.

“It’s extremely rewarding to see them do that,” Nathan Budde said. “We try to exercise as a family and encourage the kids to be involved.”

He also encourages those who feel the Ironman is an impossible endurance event to improve their fitness enough to try.

“Because I had watched it when I was young, I thought it was exciting – but I know that, when you talk to other people, they say it’s crazy,” Budde said. “Now I think it’s kind of inspiring.

“I have people tell me that they could never do that, and my response is that anybody can do it. You just need to put your time and effort into it. But anybody can do that. You don’t need to be an elite athlete to finish a triathlon.”