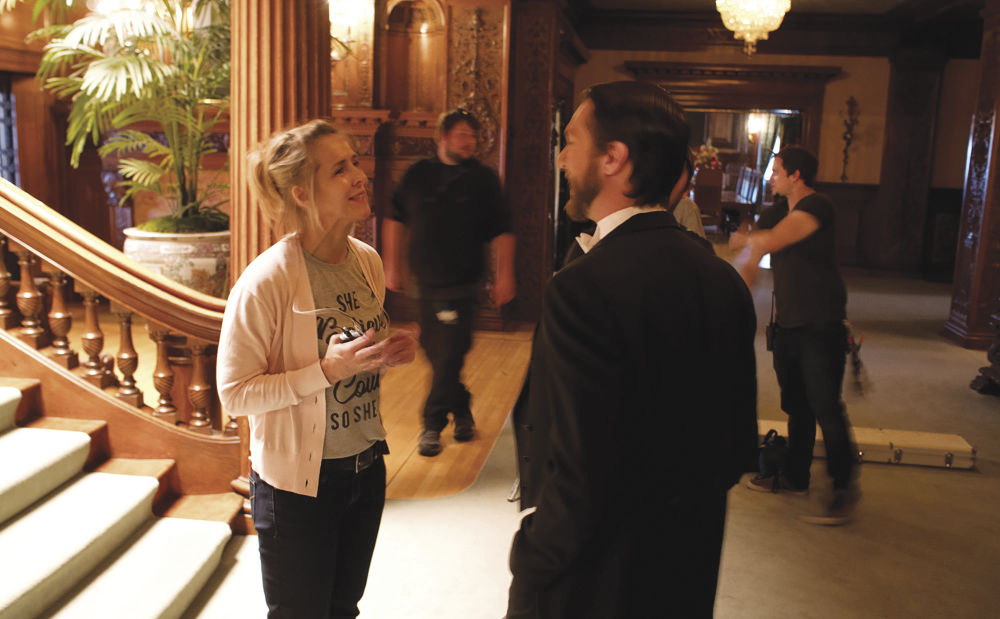 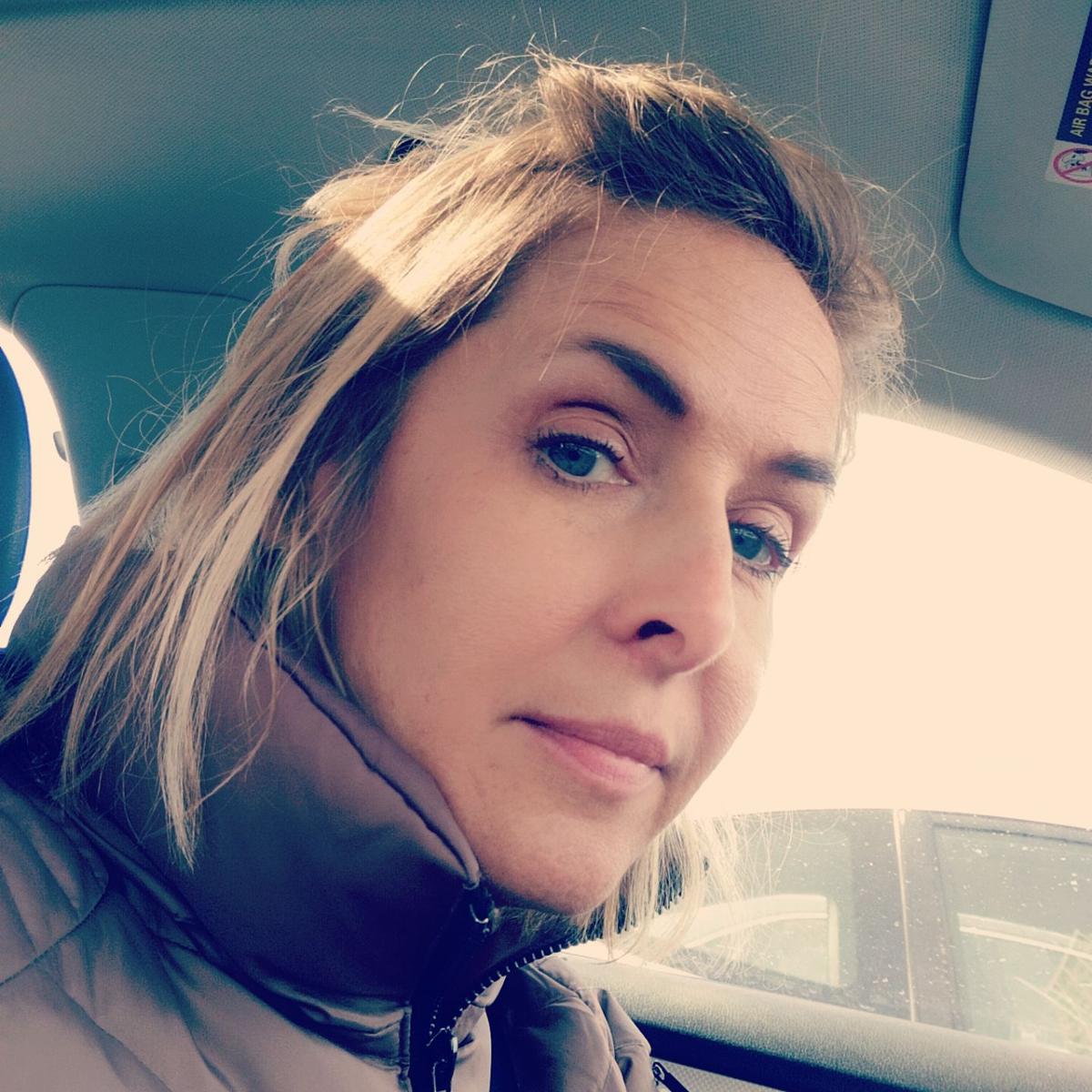 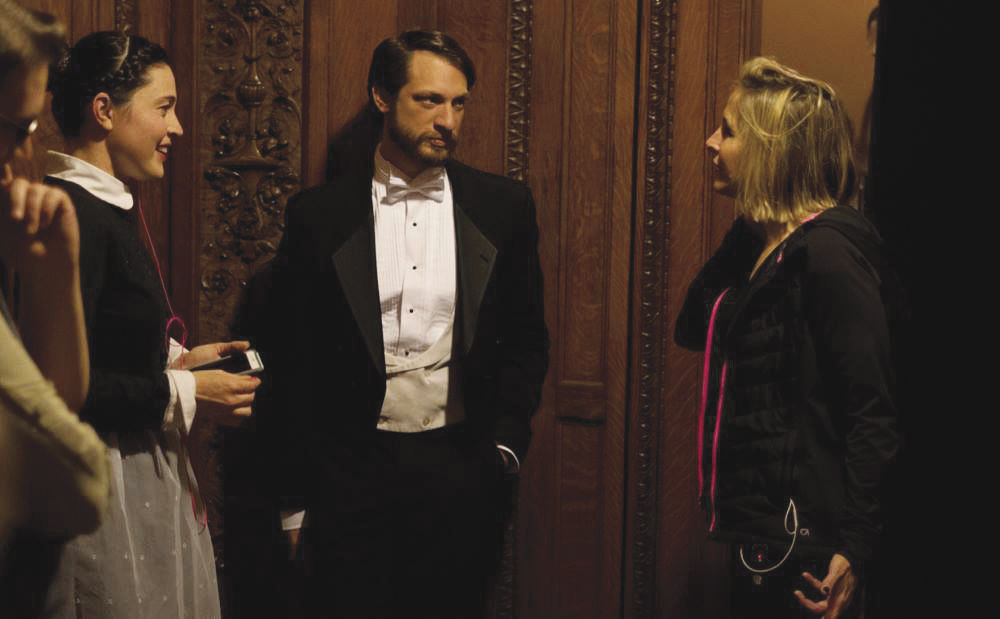 Director Julie Koehnen with actors Seth Hale and Tiffany Cornwell on the set of “Master Servant.” 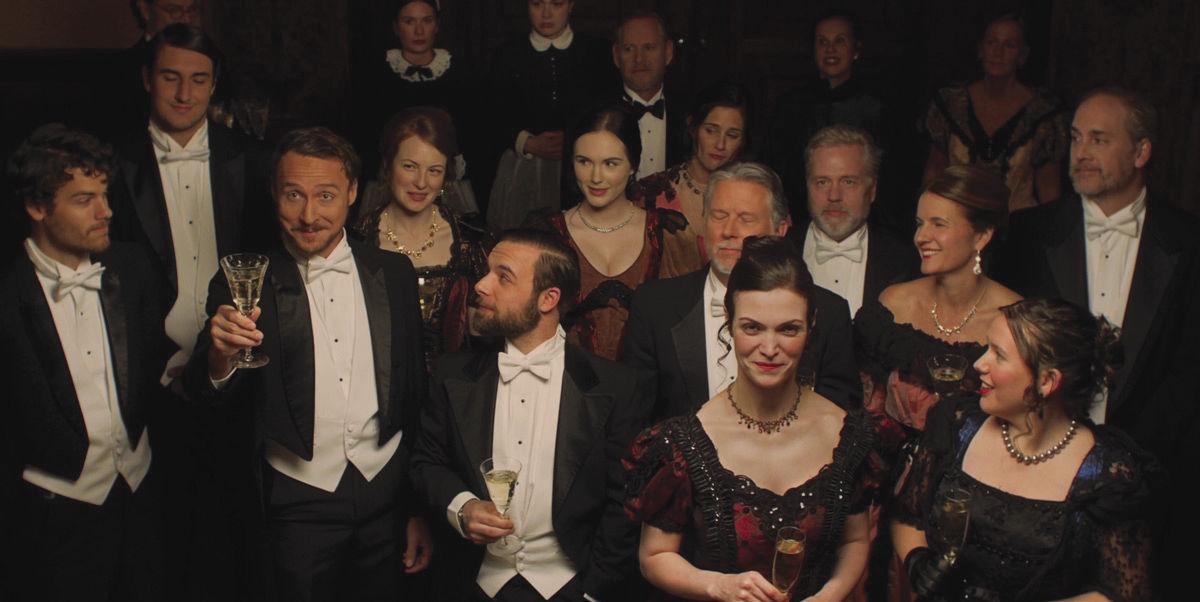 A toast is made during “Master Servant.” 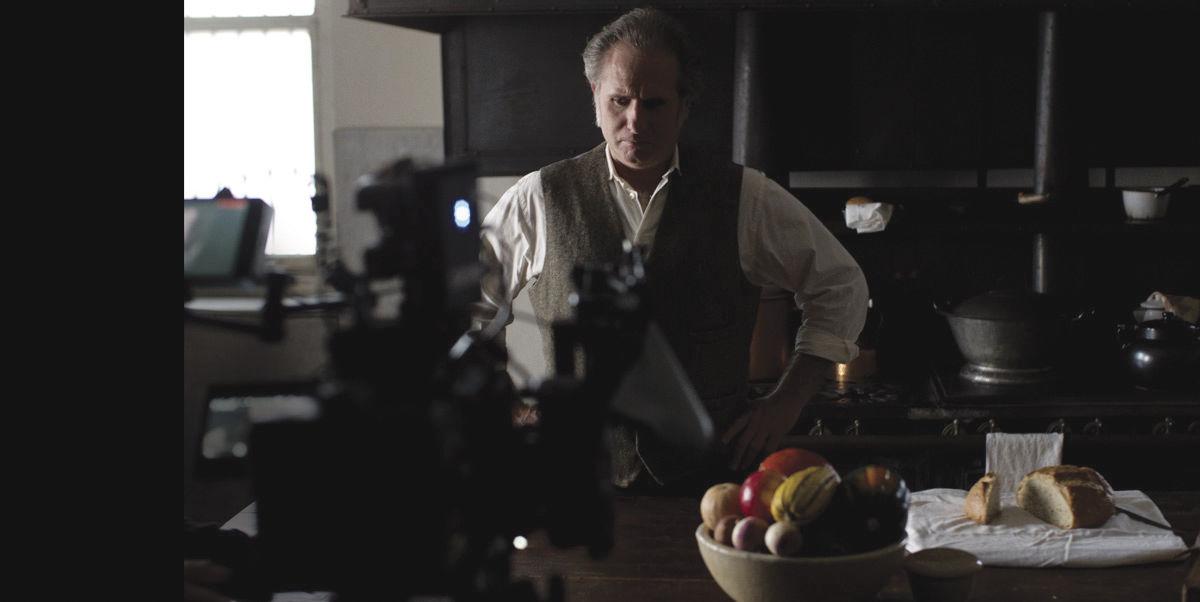 Actor Remy Auberjonois on the set of “Master Servant.” 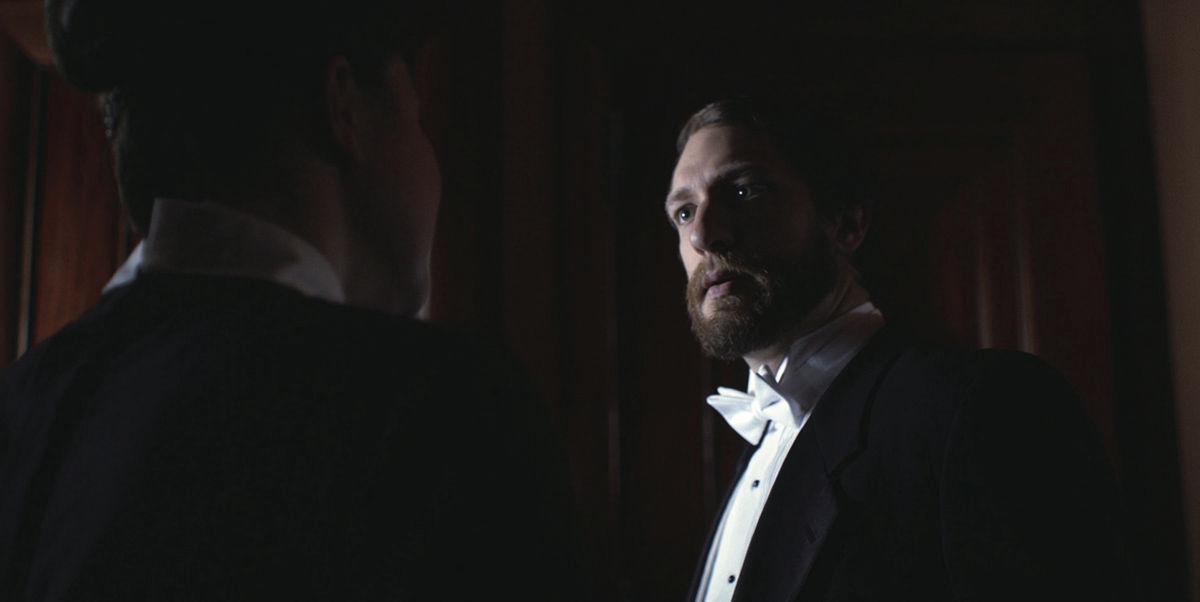 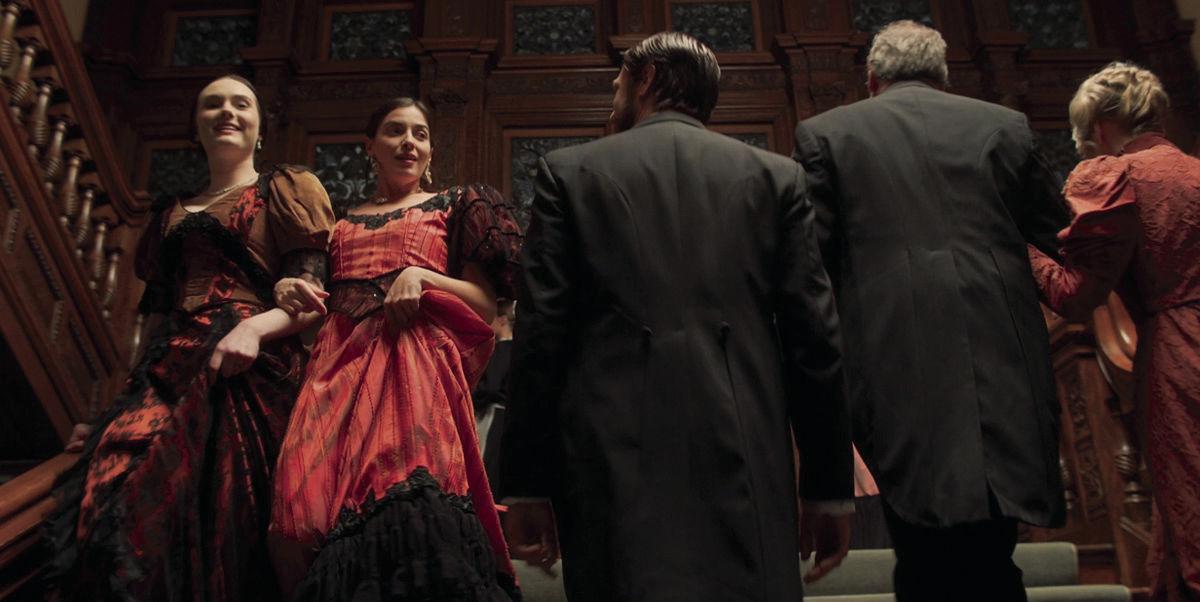 A scene on the staircase in “Master Servant.” 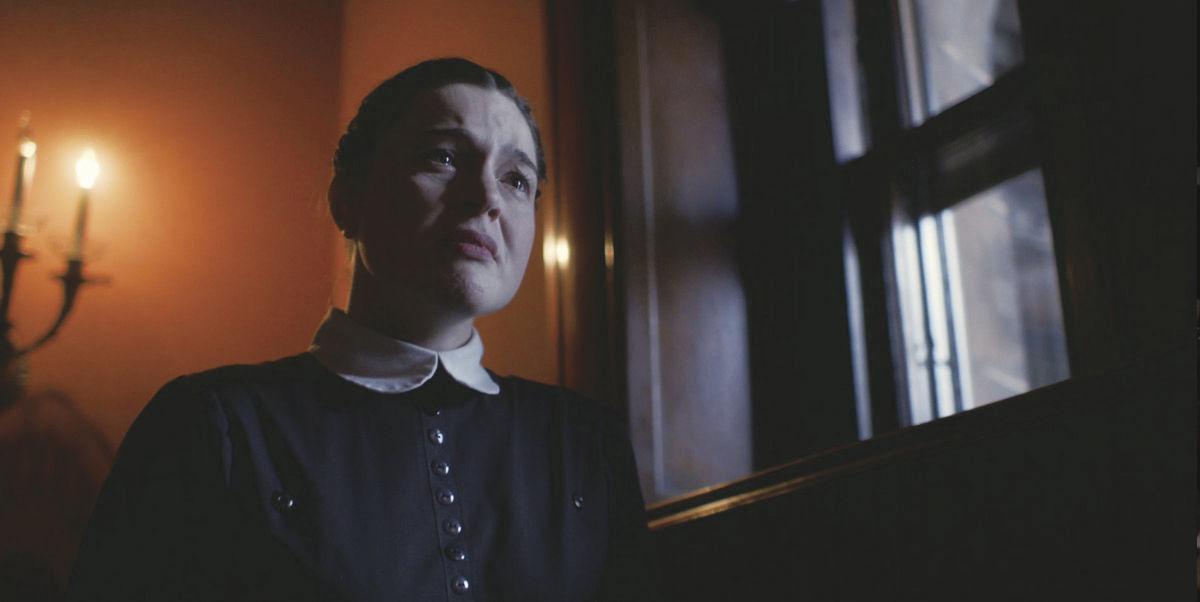 Director Julie Koehnen with actors Seth Hale and Tiffany Cornwell on the set of “Master Servant.”

A toast is made during “Master Servant.”

Actor Remy Auberjonois on the set of “Master Servant.”

A scene on the staircase in “Master Servant.”

After getting her fashion design degree from Los Angeles’ Fashion Institute of Design and Merchandising, Cambridge-Isanti High School graduate Julie Koehnen pursued her passion for filmmaking by writing, producing, acting in and directing short films in Los Angeles.

“I had a real passion for design and discovered that the only competitive schools at that time – Otis Parson, the Fashion Institute and the Fashion Institute of Design and Merchandising – were in New York and Los Angeles. I tried New York first but discovered Los Angeles was a less intimidating place for someone from such a small place – it was a better fit for me personally,” Koehnen said. “In a very roundabout way I started to work in the entertainment industry in front of the camera but rather quickly I discovered I was more interested in the entire process. I started making short films that I would write/produce/act in and then I moved into writing/directing and editing my short films.”

Koehnen, the daughter of Robert Koehnen and Nancy Maslen, grew up in New Prague but later lived in Cambridge for six years, graduating high school from Cambridge. They moved to Cambridge after Koehnen’s mother got a job at the elementary school.

Koehnen worked hard to move up in her career in Los Angeles.

“I began as an assistant editor and worked my way up to editor. I worked for the NFL Network in Culver City until I left at the end of the 2016-2017 season. Working as an assistant editor is where I gained all my technical skills, learned to work with large amounts of footage, multiple cameras, different editing systems and sharpened my story telling skills. In reality TV often the editor is shaping the story with the story editor – there is no script, and because of the large quantity of footage, there is a lot of opportunity to cut together or string out a story for the editor to polish,” Koehnen said. “I developed my skills for selecting strong images, well composed images, creating a story arc and building a storyline out the smallest statement or action. It was a great way for me to make a living while I learned the craft of filmmaking. Working as an editor has definitely contributed to my filmmaking abilities – I am extremely clear about story structure and what shots I need – not that I always get all my shots to build my story, but I am aware of what I need! In filmmaking at this level there’s a lot that can happen that’s simply out of your control.”

Koehnen said she was excited to experience California.

“I was very naive and very young when I got out there – I was also very much on my own so, it was very difficult in many ways, and I was forced to learn a lot quite quickly. I was also very excited because I was always interested in the world beyond Minnesota. In Los Angeles it felt, at the time that I was in the middle of this huge cultural movement, this global community and of course I was mesmerized by the entertainment industry – for me it really was just a huge revelation about the world itself. Also as a creative person, I was able to thrive in a way that would have been impossible for me to do so here in Minnesota,” Koehnen said. “As far as celebrities, I spent quite a bit of time on sets and working in areas such as West Hollywood and Beverly Hills, living in Brentwood, so I have met many – which is not to say I ran around with famous people, but celebrities, they really are everywhere in Los Angeles.”

In 2016, after working on Super Bowl 50 as an editor, Koehnen left Los Angeles and moved to Minneapolis to start research on a television series she had been thinking about ever since visiting the James J. Hill house, a historic mansion on Summit Avenue in St. Paul.

“I moved back in 2017, and I moved back to pursue a project that I could not really put down. I was here in the offseason (NFL football season) developing a TV series inspired by James J. Hill. I spent the summer of 2016 in the Minnesota Historical Society library reading through Hill papers, and I put together a show bible about the series and returned to Los Angeles for the preseason,” Koehnen said. “When I got back, I just wasn’t into it anymore. I had to own the fact that I was obsessed with the Gilded age and the industrial revolution at the turn of the century as it took place here in Minnesota. More specifically, I wanted to dramatize it – I wanted to make a Minnesota’s ‘Downton Abbey.’”

Koehnen served as writer, director and producer of her latest short film, “Master Servant,” that premiered at the Twin Cities Film Festival on Oct. 17.

“Master Servant” is 12 minutes and the film synopsis is as follows: “On the very night of the celebration of the Great Northwest’s completion of the transcontinental railroad, a catastrophic explosion at the railroad yard kills many of its workers and devastates the lives of their loved ones. Determined to celebrate this great achievement, railroad executive Samuel Blackburn struggles to remain indifferent to his workers’ losses and to celebrate alongside the social elite.”

Koehnen felt honored to be a part of the Twin Cities Film Festival.

“I felt tears, gratitude. So incredibly exciting to finally show your work after you’ve been at it for so long and then for it to be so well received. I was one of five films nominated for Best Short Film. I was also a runner-up for Audience Award, but it’s really the nomination for Best Short Film that mattered the most to me,” Koehnen said. “Not to get too technical, but it was the first time I saw it projected from a DCP, which is a film file which has a very large resolution. Also, it played its full 5.1 surround sound, not just stereo, so the score, the mix, they were just overwhelming. The audience clapped at a certain point during the film, and I think it was during a Steadicam shot that went from the front door up the grand staircase of the James J. Hill house. There were all these actors dressed in gowns and tuxedos with a string quartet playing and it was just stunning. It gave me chills, and I’d seen the footage I don’t know how many times.”

The next showing of “Master Servant” will be held during opening night, Jan. 31, of the St. Louis Park and Golden Valley Artist Showcase at The Galleries of Brookview, 316 Brookview Parkway S., Golden Valley.

The doors open at 5 p.m. for guests to meet with the 30-plus artists in attendance with other opening night activities planned. At 7 p.m., the Golden Valley Orchestra will present “Dvorak and Brahms,” inspired by the film “Master Servant,” and at 7:30 p.m. the free screening of “Master Servant” will be held.

“It was extremely fast for me – I conceived of the film in June of 2018 and we shot in November of 2018. I finished post production (edit, color correction, sound mix, online) in March of 2019, so not even a year,” Koehnen said. “I had a lot of help, a lot of people were very enthusiastic about the project. I had two hardworking knowledgeable producers, Steven Elbert and Ruth Maramis. They were incredibly committed to the film. Also I want to give a shout out to my colorist/online editor in Los Angeles, a friend who is really incredibly talented and who cares deeply for this project, Mike Wolf. I cannot believe the look we were able to give the film because of his skill level.”

Koehnen admits she has always been somewhat of a history buff.

“I have always been a bit obsessed with history, but it was a visit to the Hill House on Summit Avenue in St. Paul that really got me intrigued. I couldn’t help but see the history there as it was 125 years ago, and with all the preservation in St. Paul, it wasn’t that difficult to imagine a time when St. Paul had black smoke pouring out of every chimney, the streets were filled with horses and wagons, the rivers overflowing with boats and barges,” Koehnen said. “Also I was intrigued by ‘Downton Abbey’ and wondered why I didn’t know more about America’s social and economic history. But, if you think about it, in my day most of American history was taught around wars, so the other areas of our history just kind of got lost.”

The official name of Koehnen’s film production company is Ravenstream Productions, which has special meaning to Koehnen.

“I grew up in Ravenstream, a neighborhood in New Prague, and at the time it was mainly a forest and it was magical – so it was obvious that that was what I wanted my company’s name to be,” Koehnen said.