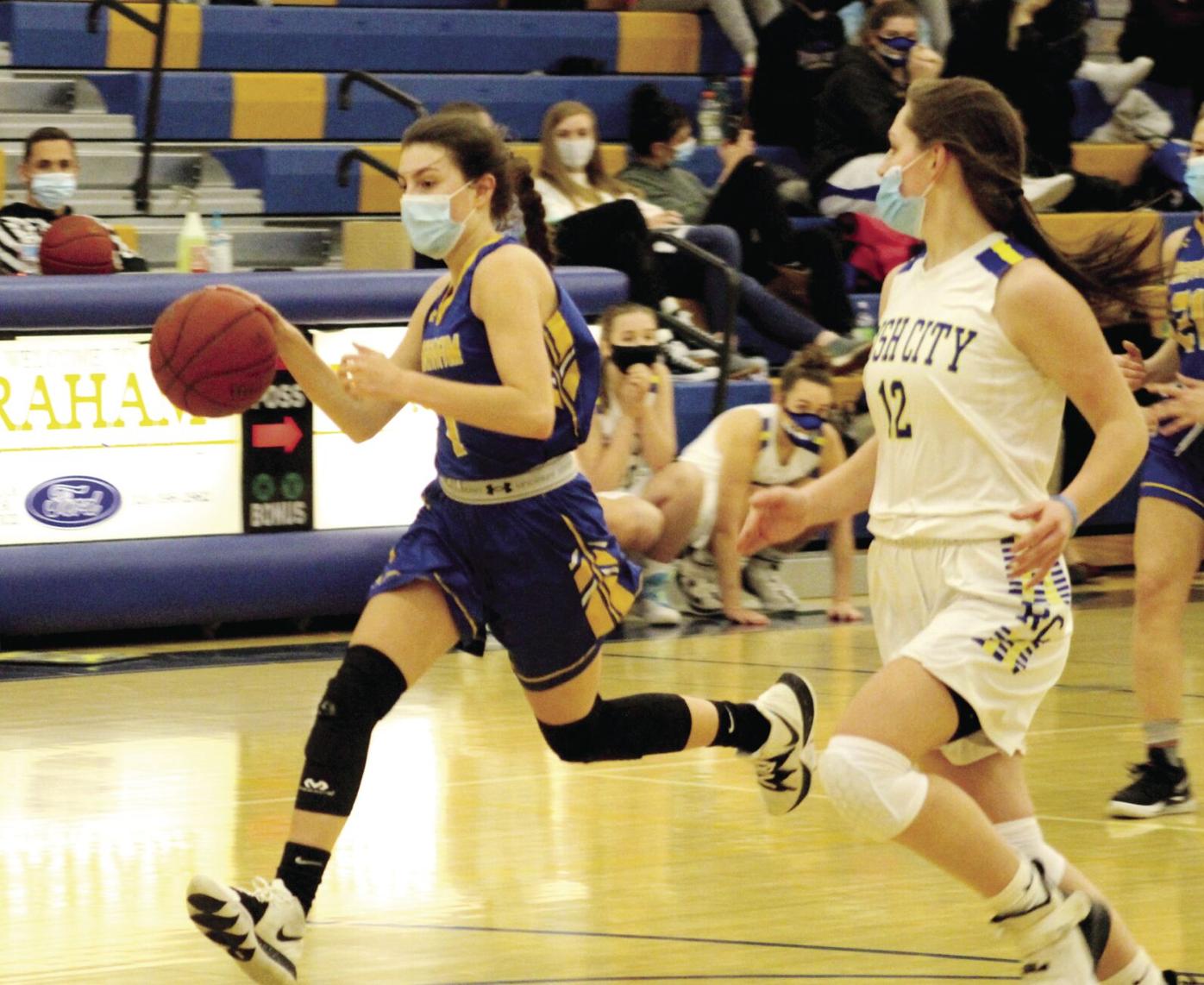 Hannah Cornelius drives to the basket in a contest against Rush City earlier this season. Last year Cornelius surpassed 1,000 points for her basketball career with the Bombers. Photo by John Wagner 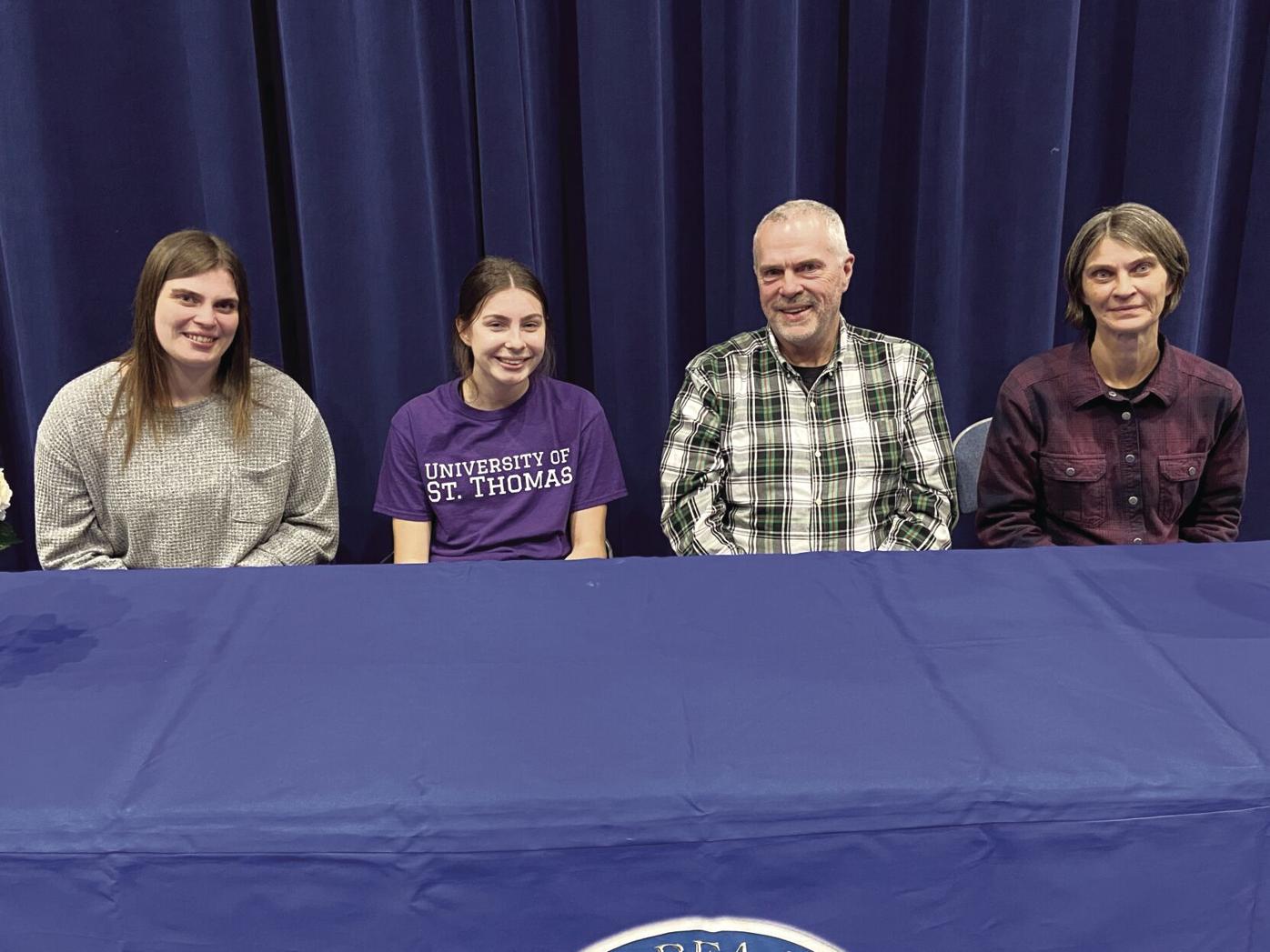 Hannah Cornelius, wearing the purple University of St. Thomas shirt, prepares to sign her national letter of intent. With her are, from left, sister Alison, father Bob and mother Diane. Submitted photo 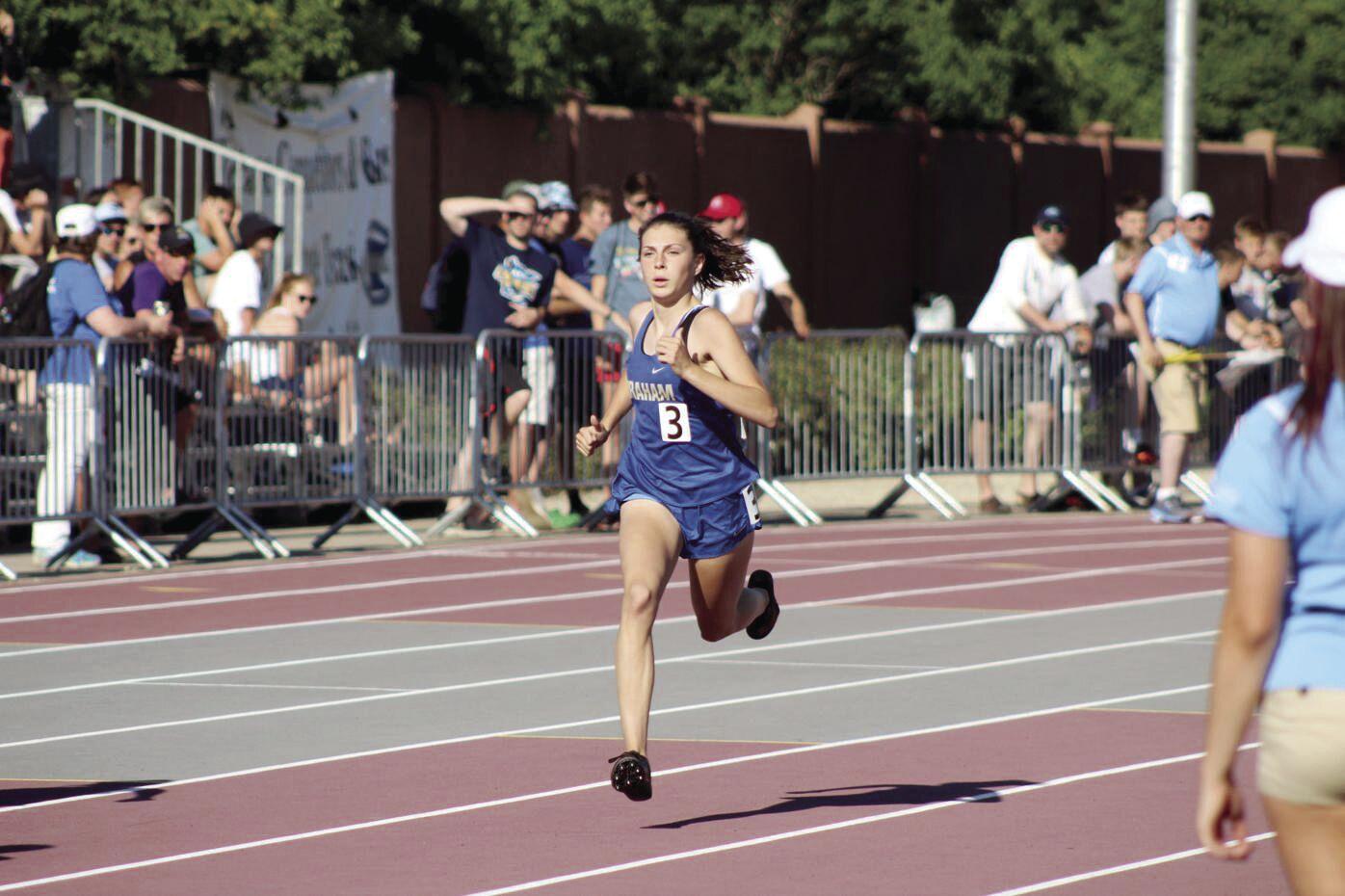 Hannah Cornelius running at the Class A state track meet hosted by Hamline University as a sophomore in 2018. Cornelius placed at the state meet as an eighth grader, freshman and sophomore; last year the state meet was canceled. File photo

Hannah Cornelius drives to the basket in a contest against Rush City earlier this season. Last year Cornelius surpassed 1,000 points for her basketball career with the Bombers. Photo by John Wagner

Hannah Cornelius, wearing the purple University of St. Thomas shirt, prepares to sign her national letter of intent. With her are, from left, sister Alison, father Bob and mother Diane. Submitted photo

Hannah Cornelius running at the Class A state track meet hosted by Hamline University as a sophomore in 2018. Cornelius placed at the state meet as an eighth grader, freshman and sophomore; last year the state meet was canceled. File photo

“I first met her in basketball as a seventh grader, and I got to know her in track that year,” Hoffman said. “I knew she was fast, but I didn’t know she was that fast. When she actually competed for the first time, we knew we had something special.”

Cornelius has a different memory.

“I remember being tiny,” she said. “It was my first year of track, because I had played softball before that. All I remember was being small and weak. But right away I liked that track was both an individual and a team sport.”

And right away Cornelius began to excel in her new sport. She qualified for the state meet for the first time as an eighth grader and has earned four medals in her career.

But Hoffman was not surprised that Cornelius has developed into an outstanding runner who on Wednesday, Feb. 3, signed a national letter of intent to run track at St. Thomas University starting next year.

“She’s the fastest kid I’ve ever coached, and she’s the fastest female I’ve ever seen in person,” Hoffman said of Cornelius. “She has long legs and is strong, so there is talent there. But it’s also her mentality: She has that extra drive and mentality that special athletes have.”

That combination of speed and desire has made her a two-sport standout at Braham.

SPEED ON THE TRACK

Hoffman could see immediately that, even as a seventh grader, Cornelius was fast. But over the course of that first track season the Braham coach came to realize that Cornelius was more than just fast.

“She is very strong-willed and determined, and she is very competitive,” Hoffman said. “She will do anything in her power – even if it makes her feel sick after a race – to get the time she wants and to get the place she wants.”

That combination of talent and hard work helped Cornelius advance to the state meet as an eighth grader, where she finished fifth in Class A in the 400 meters with a time of 58.95.

“I was definitely surprised – I didn’t think I would get anywhere near that,” Cornelius said. “There’s no way I would have thought it was even possible.”

As you can imagine, she was disappointed there was no state meet last spring.

“That was obviously a bummer, but I think it has made me more excited for this season,” Cornelius said. “It’s my last season of high school track ever, so I want to do the best I can.”

Hoffman has noticed the drive her senior standout has for the season ahead.

But Cornelius also is not afraid to put in the work to reach that potential.

“That might mean extra practices, that might mean working through leg soreness, and that might mean long nights,” Hoffman said. “She has a dream, and she didn’t reach that dream just because of her talent. She worked hard to be as good as she is.”

SPEED ON THE COURT

It did not take long for Cornelius to use her speed to impact the Bombers’ girls basketball program. While she played a few minutes on the varsity as a seventh grader, she became a regular starter as a freshman and has never looked back.

Last year she surpassed 1,000 career points, and this season she has helped Braham use a pressing defense and fast-break offense to run to an 8-2 start.

“We favor speed over size, so it definitely helps when we can put Hannah at the top of a press or have her ‘leak out’ after an offensive rebound,” Bombers girls basketball coach Zach Loy said. “Her speed and talent are things a lot of teams don’t have answers for.”

That was on display in Braham’s come-from-behind win at Upsala on Tuesday, Feb. 9.

“We were struggling a little bit, and we were behind with seven or eight minutes left – and Hannah just turned it on,” Loy said. “She scored 17 of our last 19 points, and she basically took over. And that was at both ends: Defensively she was getting steals, and on the offensive end she was getting buckets in transition or finishing at the rim in our half-court offense.

“She basically said, ‘We’re not going to lose this game.’”

Cornelius said her role on the team is to do more than create steals and score points, though.

“I want to be a leader, and I play as hard as I can – and encourage everyone else to do that, too,” she said.

Loy said the leadership Cornelius displays has been a factor in the team’s strong start this season.

“I think Hannah would be the first to say she’s not going to be the big ‘rah-rah’ leader,” Loy said. “She’s not afraid to speak to other players, but she’s more of a quiet, calm supporter of her teammates. There are times we get over-amped, and she brings a calming presence. She stays level-headed and brings us back to where we need to be.”

Cornelius said she had mixed emotions when she signed her national letter of intent for St. Thomas.

“It was weird, because I’ve been thinking about college for a few years,” she explained. “It was great to not have to worry about where I was going to go.”

Cornelius said a number of factors went into her decision to join the Tommies next year.

“I like that St. Thomas is close, and it’s a good school,” she said. “They have a good track program, and they have good academics. I’m running there, but the goal is to get a good degree.”

After signing day, Cornelius made it a point to thank a number of people for her success, starting with her parents, Bob and Diane, as well as her sister Alison.

“My parents have been huge supporters,” Hannah Cornelius said. “They’ve come to every single one of my basketball games and track meets, and they have been hugely supportive. And my sister comes to games whenever she can.

“And I want to thank all of my coaches for having been super supportive. They push me, but they know what I need to do to help me reach my goals.”

And while Cornelius has already reached some of her goals, her impact at Braham goes beyond her track and basketball achievements.

“She has left such a big mark on the school,” Hoffman said. “This has been her dream ever since we realized that this kid was special, way back in seventh grade. She’s an incredible person: She works hard, and she’s also kind and can be a little silly. She’s fun to be around. She should be so proud of herself.”