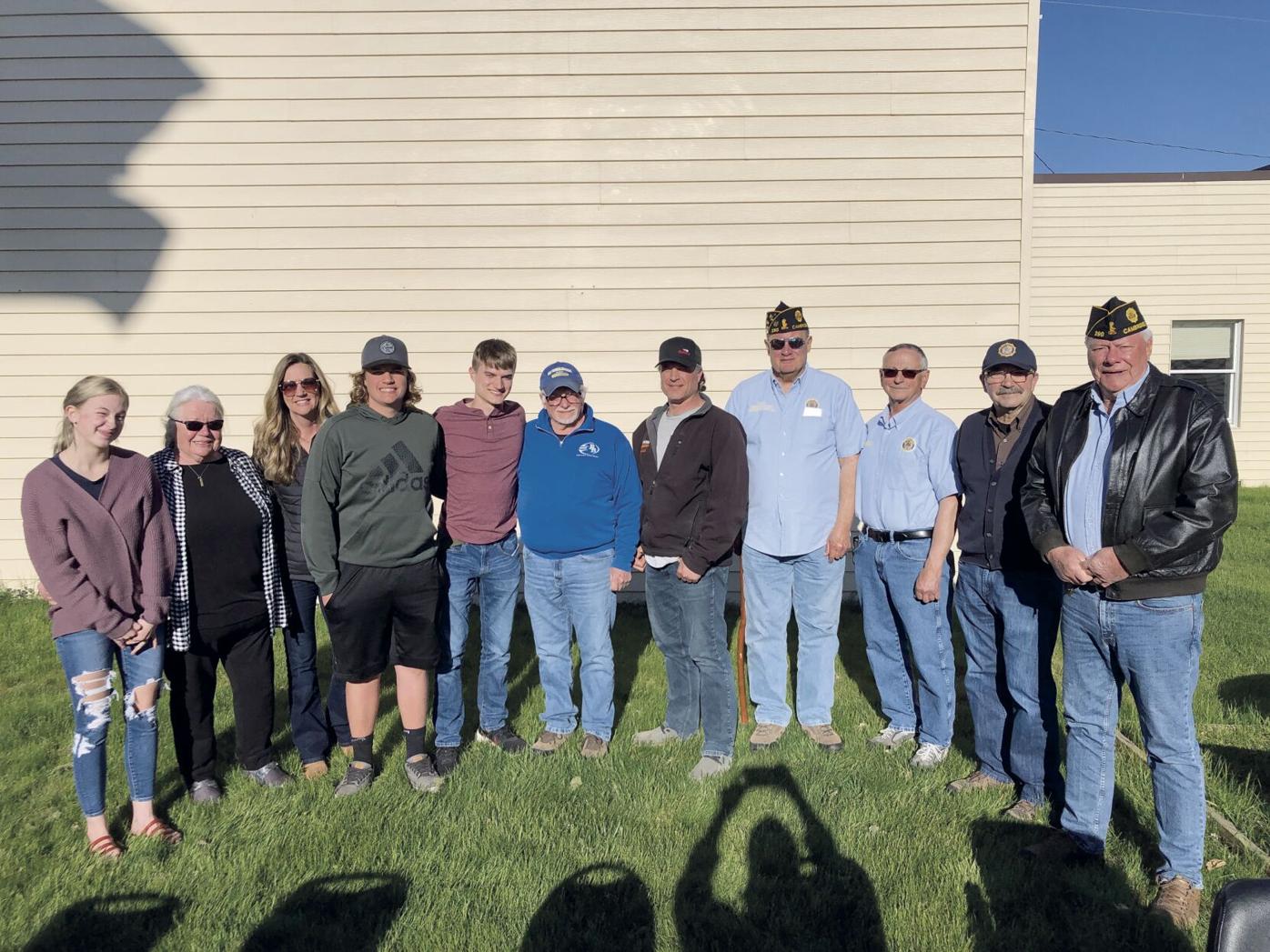 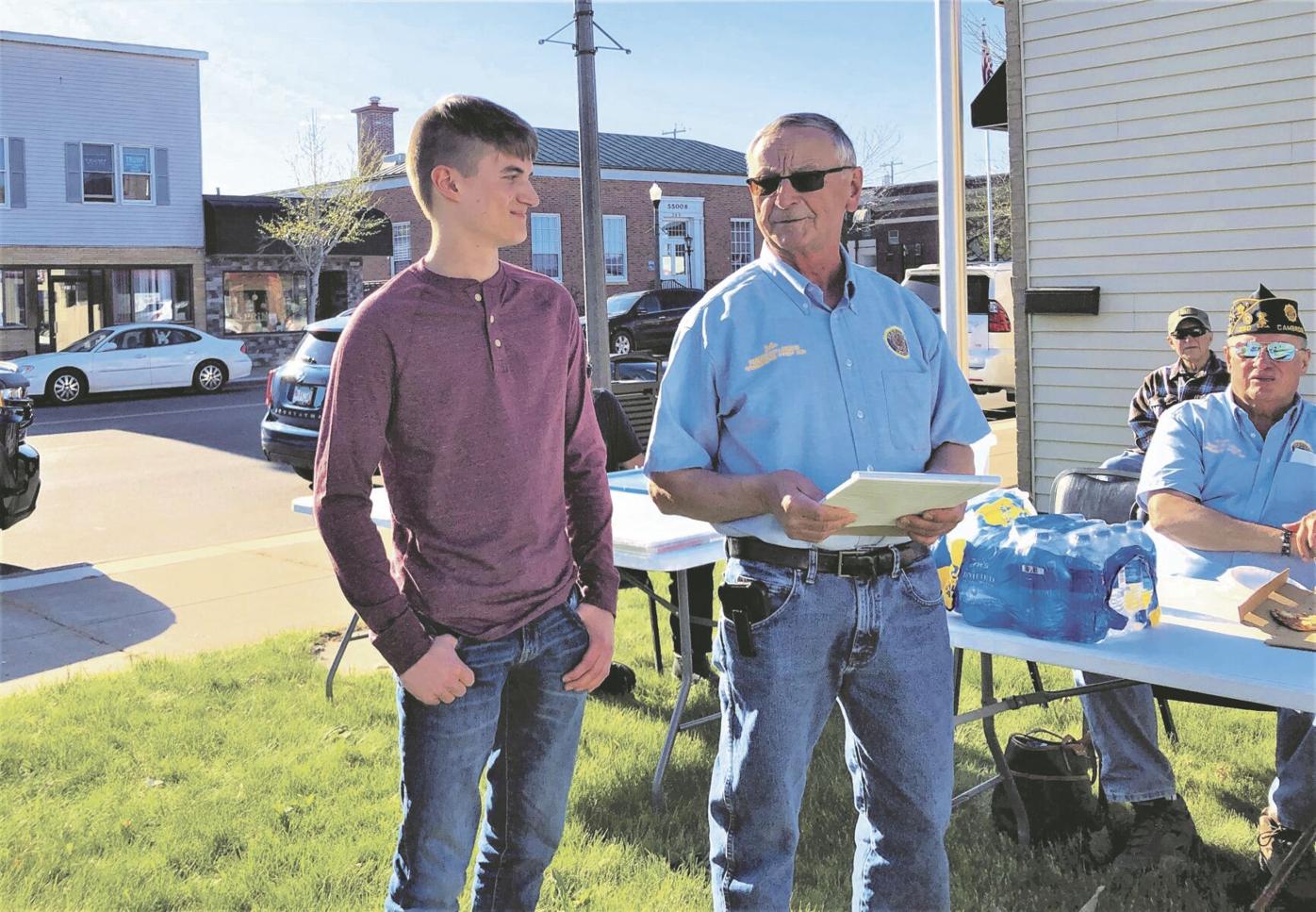 Braham High School senior Hayden Lee standing next to Dan Jakovich, chairman of the Howard McCarty Legion Post 290 Scholarship Committee, during a celebration of his $1,000 scholarship award to go toward his undergraduate studies at Minnesota State University, Mankato. 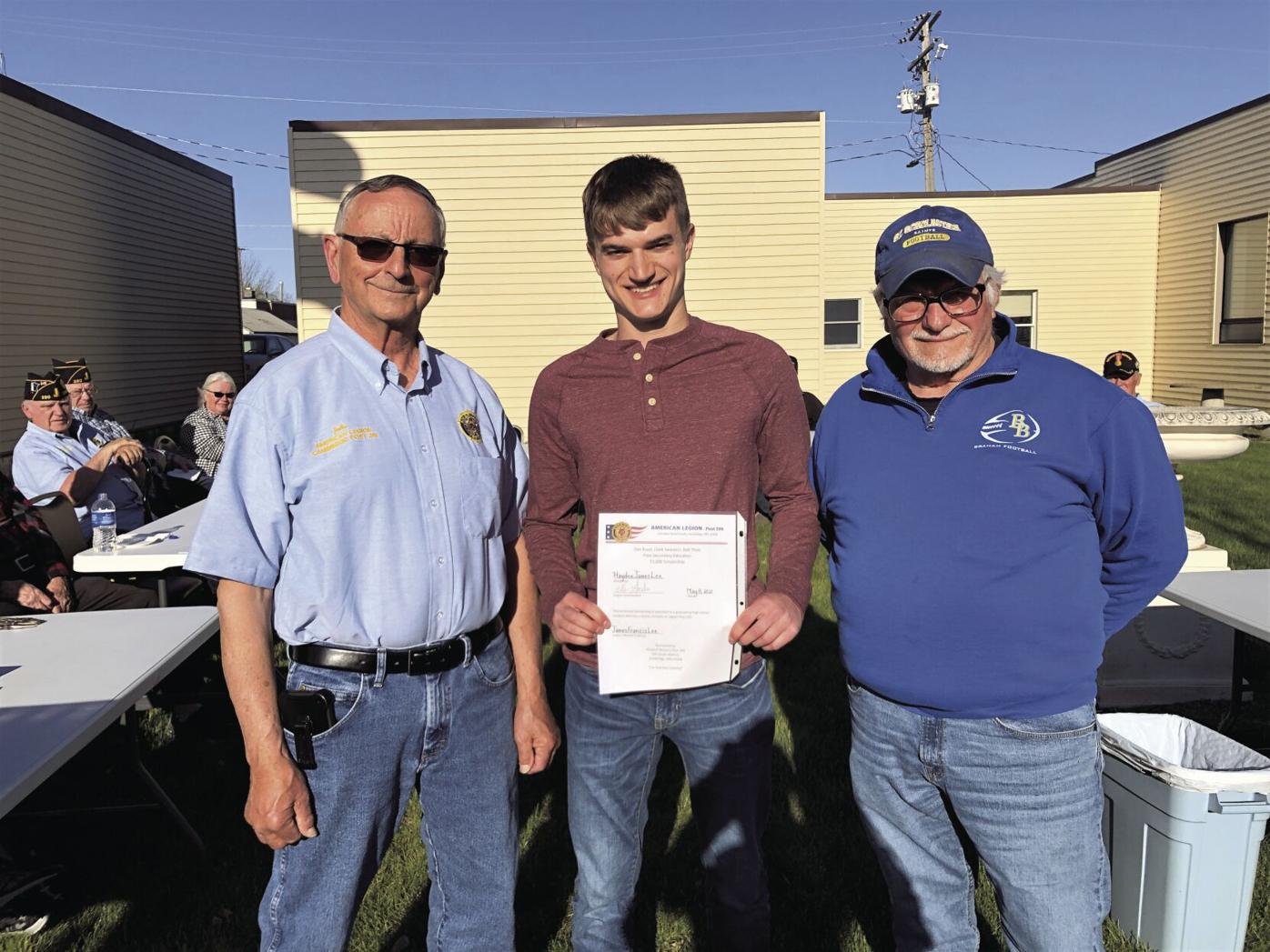 Braham High School senior Hayden Lee standing next to Dan Jakovich, chairman of the Howard McCarty Legion Post 290 Scholarship Committee, during a celebration of his $1,000 scholarship award to go toward his undergraduate studies at Minnesota State University, Mankato.

A Braham High School senior gets a step closer toward pursuing his dream after receiving a scholarship for his undergraduate studies that will begin this fall.

Hayden Lee has been showered with a lot of encouragement and support from his grandfather, Jim Lee, who helped him find the scholarship, which led to him winning a $1,000 scholarship via the new in-house Howard McCarty Legion Post 290 (Dan Ruud, Clark Swanson and Bob Theis) Scholarship.

His family, veteran members of the Post Legion 290, as well as others, gathered to show their gratitude for the veterans and to celebrate Lee’s future successes at the Legion on May 11.

“My grandpa was in Post 290 … as soon as he turned 18,” Lee said. “He found (the scholarship) online for me and printed it off. He was really excited for me to do that because I’ve been applying a lot for scholarships.”

Lee will attend Minnesota State University, Mankato on track to obtain a degree in the university’s Sport Management program in fall. The program teaches leadership and business skills needed for working in sports management.

When he first began playing for the Braham High School football team, Lee started off as a wide receiver, he said.

“But in 11th grade, our quarterback had graduated the year before, and I threw one pass in a 10th grade playoff game, and they were all over the fact of how I threw that pass,” he explained, alluding to how he became the team’s quarterback shortly after.

“Mr. (Shawn) Kuhnke, he helped me a lot through the way,” he said about Braham High School’s principal and activities director. “So he knew a lot of that I struggled with or what I was gonna struggle with, you know, he got me and got everything I was going through.”

History of the scholarship and recent changes

The new scholarship program stems from Dollars for Scholars, which was created when Post 290 had extra money, said Dan Jakovich, chairman of the Scholarship Committee, which includes members Robert Baker and Jerry Graham.

There used to be other qualifications that have since changed, Jakovich added.

“Up until the early spring of 2020, the Dan Ruud and Bob Theis Scholarship was given to graduating Cambridge-Isanti High School seniors,” he said, adding that the two Legion members were also teachers in the Cambridge-Isanti School District.

Due to COVID-19 pandemic and privacy rules, the scholarship became an in-house scholarship in the spring of last year, he said.

The Scholarship Committee also added Clark Swanson’s name to the scholarship for all his community involvement, for serving as a former commander head of the color guard, and for being the major force behind the Veterans Service Park, Jakovich explained.

This year, four people applied for the scholarship and they spanned from all over Minnesota: Andover, LeSueur, Cambridge-Isanti and Braham. But Lee rose to the top, he said.

How Lee was chosen for this year’s scholarship

Jakovich also remarked during the ceremony about some of Lee’s positive qualities.

“He has also demonstrated his leadership qualities by serving as a student council member for four years,” he added. “He was chosen to be both a football and basketball team captain. He is a member of the National Honor Society and was an all-conference football player. He has spent many hours working and volunteering in his community and also found time to take several college (Postsecondary Enrollment Options) classes.”

Tammi Johnson, dean of students, teacher and student council advisor of Braham Area Schools, wrote in her letter of recommendation about Lee’s character and more.

“(Lee) is the ideal student,” Johnson said. “He is respectful, eager to participate, dependable and takes his schoolwork very seriously. I am certain (Lee) is going to continue to do great things in his future as he pursues his interests.”

Kuhnke also weighed in on his experience working with Lee, Jakovich said.

“(Lee) has prepared himself for success with his hard work and determination,” Kuhnke said. “(Lee) also responds to the call of leadership. At the high school level, it takes much courage to lead and (Lee) possesses such courage. (Lee) will do well in all that he does.”

Lee’s response to the scholarship, community

“It’s a big honor to be up here accepting this, and it’s pretty exciting to know I have this scholarship under my belt when I go to college next year,” Lee said.

He thanked everyone who was present during the ceremony, as well as his family for being there “every step of the way,” he said.

Lee’s especially thankful for how much his grandfather cared and pushed him to apply for the scholarship, he said.

“He taught me something very important that I value a lot in life,” he continued about his grandfather, “and that’s to show up for the people you care for. He came to just about every single one of my sports games in high school. That means a lot.”