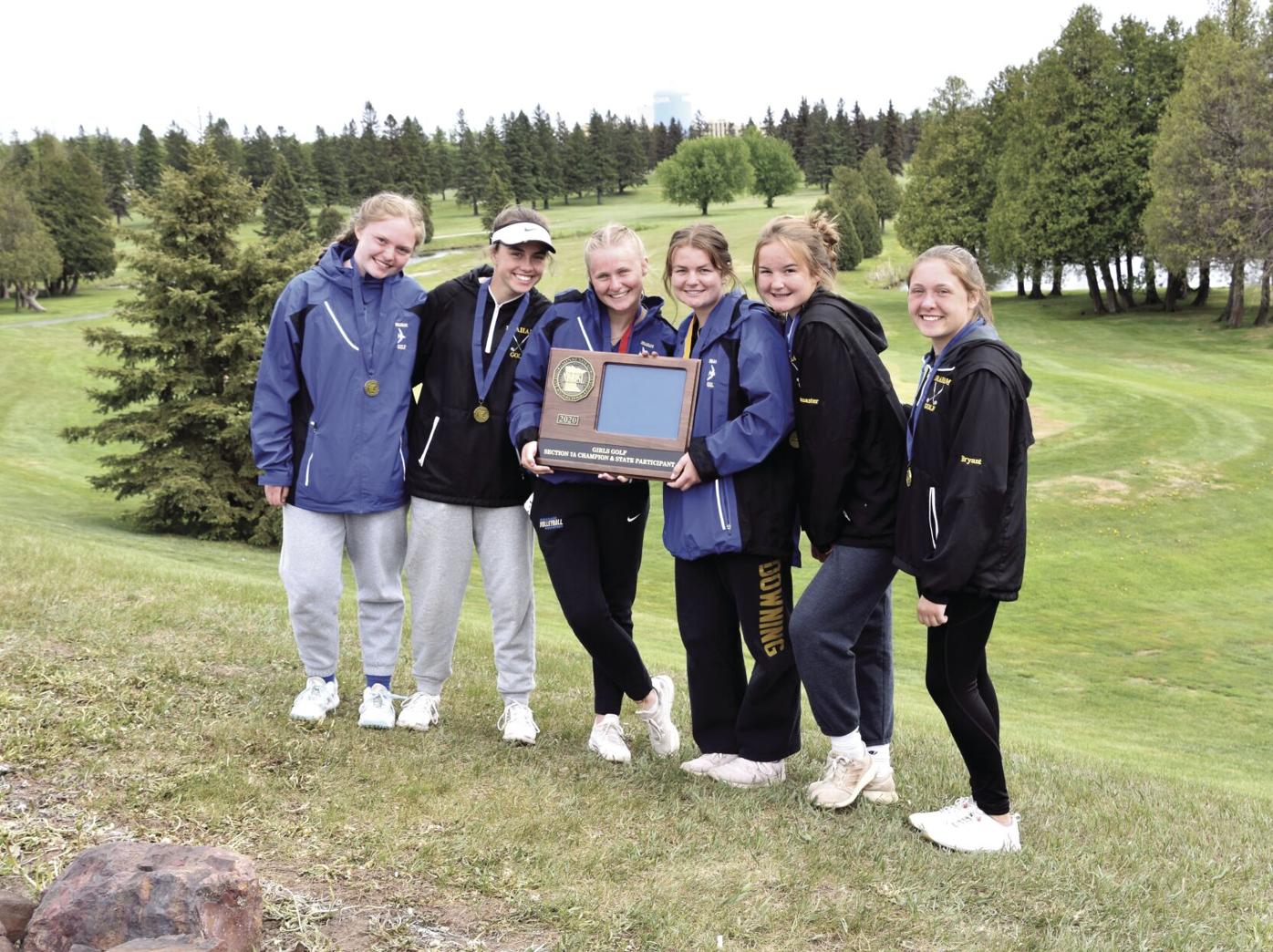 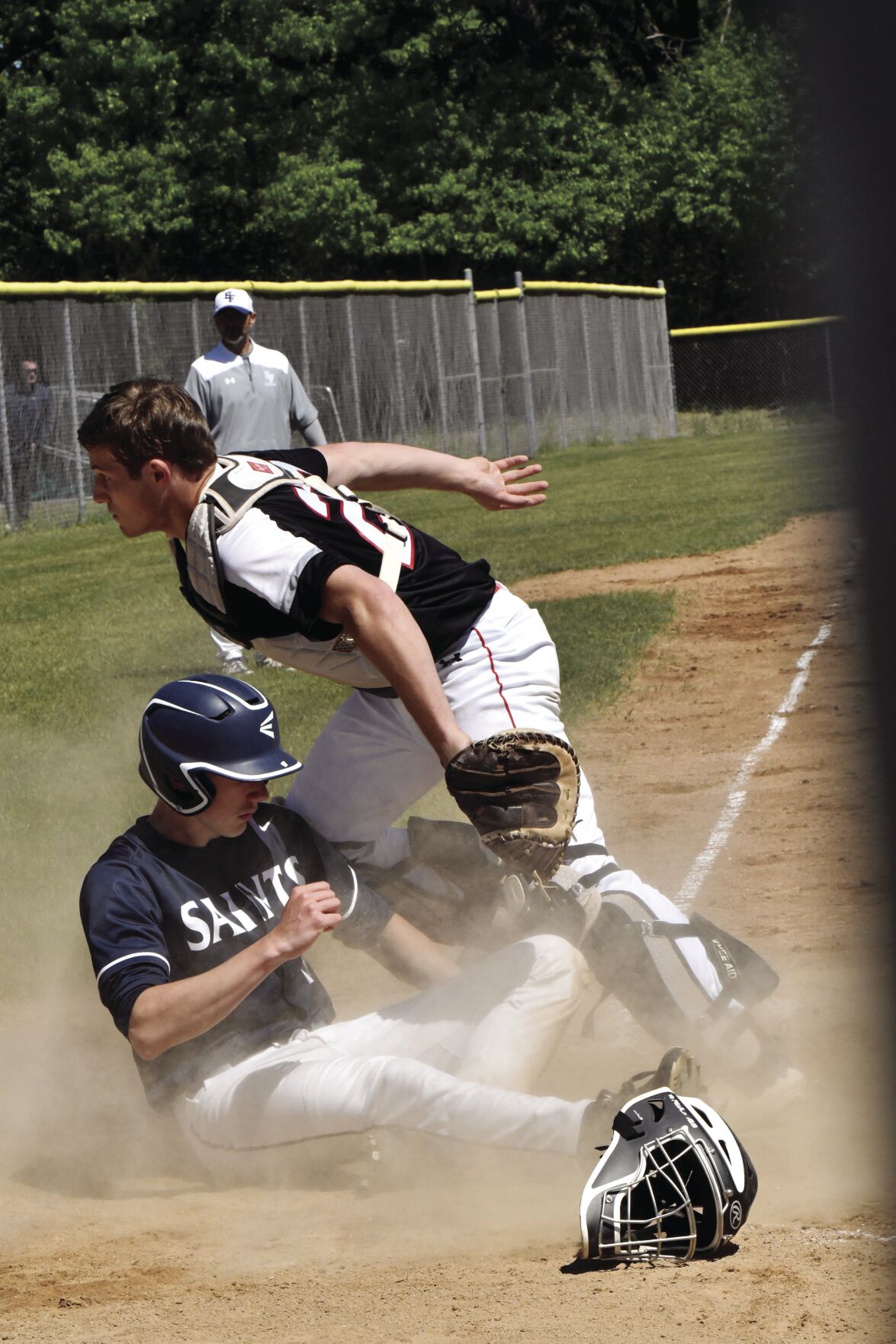 North Branch senior catcher Gavyn Jensen-Schneider tries to sweep tag a St. Francis baserunner during the doubleheader between the two teams on Friday, May 28. Photo by Jorge Perales 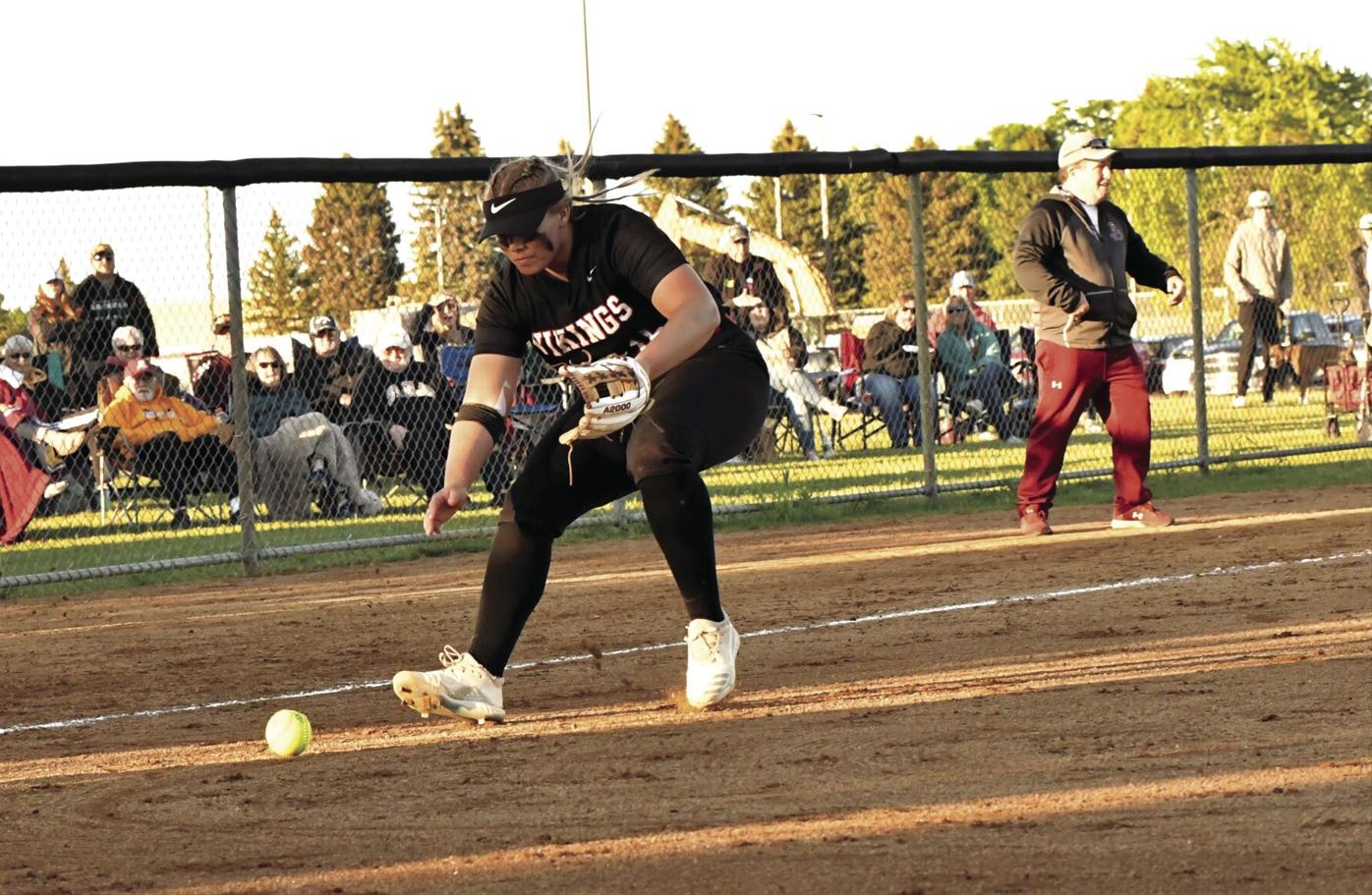 North Branch senior catcher Gavyn Jensen-Schneider tries to sweep tag a St. Francis baserunner during the doubleheader between the two teams on Friday, May 28. Photo by Jorge Perales

The Braham girls golf team advanced to the Class A state tournament by dominating the field at the Class A Section 7 tournament held at Virginia Golf Course on Wednesday and Thursday, May 26-27.

The Bombers fired a sizzling two-round total of 743, 42 strokes ahead of second-place North Woods.

Individually, seniors Jenna Bostrom and Tessa Burmaster led the way. Bostrom placed second with rounds of 86-83 for a 169, while Burmaster shot 89-90 to finish fourth with a 179.

Freshman Madison Davis finished third for Braham with a 190, while freshman Jenna Bryant closed out the top four with 206. Also playing for the Bombers were eighth grader Jenna Burmaster, who shot a 214, and freshman Delaney Johnson, who posted a 252.

Braham will compete in the Class A state meet at Pebble Creek in Becker on Tuesday-Wednesday, June 15-16.

On the boys side, Braham finished seventh with a score of 846. Senior Al Londgren finished 16th with a 176, while fellow senior Zach Yerke carded a 191 to place 21st.

North Branch opened last week with a 4-1 win at Princeton on Tuesday, May 25, but it closed the regular season with a doubleheader loss against St. Francis on Friday, May 28.

Senior Jordan Axberg and freshman Andrew Orf combined on a six-hit shutout of the Tigers to start the week. Axberg allowed just four hits and no walks while striking out eight in six strong innings, with Orf giving up a run but pitching out of greater danger in the seventh.

The Vikings lost the first game against St. Francis by a 5-0 margin as North Branch managed just two hits against the Saints. In the nightcap, North Branch fell behind 4-0 in the first inning and never recovered despite two hits, one of which was a triple, by Orf.

“These were a couple of tough losses,” North Branch coach Steve Christensen said. “We had a tough time getting the bats going. St. Francis hit the ball and forced us to make plays. They’re a good hitting team.”

Cambridge-Isanti split four games last week, starting with an 8-6 victory over Big Lake on Tuesday, May 25. Junior Max Sickler had four hits, including a home run, and three RBIs in the win, while senior Connor Braaten was 3-for-4 in the contest.

The Bluejackets then split a doubleheader with Duluth Denfeld on Wednesday, May 26, losing the opener 7-3 before winning the nightcap 5-0. They closed the week with an 11-4 loss at Monticello on Friday, May 28.

Cambridge-Isanti entered the Class 4A Section 7 tournament as the No. 8 seed and was scheduled to play its section opener at Andover on Wednesday, June 2, in a contest that was not completed at press time. Regardless the outcome of that contest, the Bluejackets will play a second-round game on Thursday, June 3.

Cambridge-Isanti finished fifth in the final Mississippi 8 tournament of the season, which was played at Princeton Golf Course on Monday, May 24. The Bluejackets posted a team total of 343, just seven strokes behind Big Lake in fourth.

Individually, senior Easton Parnell fired a fine round of 77 to place third, just four strokes behind medalist Zach Stanz of Becker. Sophomore Logan Westman finished with an 85 to tie for 17th place, while junior Tucker Kolb shot an 89 and sophomore Finn Overby added a 92.

North Branch placed seventh in the meet at Princeton with a team total of 354. Eighth grader Taylor Minke carded an 83 tie for 10th place and to lead the Vikings, while junior Jack Gladitsch shot an 87 to tie for 20th. Senior Nate Halseth finished with a 90 and junior Isaiah Stokes added a 94.

Cambridge-Isanti’s Parnell and Westman both were named to the All-Mississippi 8 team, as was Minke of North Branch.

Cambridge-Isanti finished its Mississippi 8 season on a strong note, claiming second place in a meet held on the Red Course of Chisago Lakes Golf Course on Tuesday, May 25. The Bluejackets carded a team total of 361, just three shots behind the host school in first place.

Individually senior Jasmyn Sibell took medalist honors with an impressive 78, a whopping seven strokes ahead of Chisago Lakes’ Emily Erickson in second. Rounding out the C-I lineup was senior Ashton Parnell, who placed fifth with a 90; sophomore Emily Nystrom, who carded a 95 to tie for 10th; and senior Maggie Kurowski, whose 98 total was tied for 16th.

North Branch also fared well in that meet, placing fourth with a 392 total. Individually, junior Hailey Bistodeau fired a 91 that was good for seventh place, while senior Chloe Moline carded a 98 that placed her with Kurowski and two others for 16th.

Sibell, whose average of 81.80 shots per round was a whopping six shots ahead of her nearest competitor, was named to the All-Mississippi 8 team, as was her teammate Parnell. North Branch’s Bistodeau also was selected to that squad.

In the first game the Vikings gave up three runs in the first inning and were not able to overcome that deficit in a 5-3 loss. Senior Emma Hurd had two of North Branch’s five hits in the contest.

The Vikings were hamstrung by errors that led to five unearned runs in a 10-9 loss in the nightcap. Offensively senior Sophie Smith went 3-for-4 with a double and a home run that produced four RBIs, while junior Ava Sittlow also finished with three hits.

North Branch then lost to Elk River, the third-ranked team in Class 4A, by a 3-2 score on Wednesday, May 26, then dropped a 6-4 decision at Forest Lake, which was ranked sixth in Class 4A, two days later.

“We’ve had some flat-out losses and some productive losses, and those two games were productive losses,” North Branch coach Kathy Crudo said. “Productive losses are losses that we’re going to learn from. We’re not going to back down to anyone. I’m super-proud of our seniors – and our entire team – for battling in those games.”

The Vikings enter section play with an 11-9 overall record and a 9-5 mark in Mississippi 8 games.

Cambridge-Isanti suffered a 10-0 loss to Chisago Lakes on Tuesday, May 25, and enters section tournament play with a 4-13 overall mark and a 3-9 record in M8 action.

Rush City closed out the regular season with a come-from-behind 8-5 victory over Mora on Tuesday, May 25. The Tigers trailed 5-1 entering the bottom of the second before scoring seven unanswered runs to claim the victory.

Rush City, which took advantage of nine walks from Mustang pitchers, was led offensively by Grace Folkema, who had a pair of hits. The victory gives the Tigers a 15-4 record entering section play.

Cambridge-Isanti won its first contest in the Class 2A Section 7 team tournament by knocking out Princeton 6-1. The Bluejackets won all four singles matches – Erik Kindem at first singles, Alex Magnuson at second, Keagen Lowman and third and Micah Gustafson at fourth – while the first doubles team of Rigo Mork and Caden Chesla also was a winner.

But C-I suffered a 5-2 loss to Anoka, the No. 3 seed in the tournament, in the second round to close the books on a 14-6 season. The two winners for the Bluejackets were Magnuson at second singles and Lowman at third singles.

Cambridge-Isanti now will compete in the individual section tournament starting next week.

Cambridge-Isanti showcased its depth in winning a quadrangular hosted by Big Lake on Tuesday, May 25. The Bluejackets finished with 106.5 points, 22 more than second-place Monticello, despite winning just four events.

A good example of the Bluejackets depth came in the pole vault, where Riley and Micah Wilson teamed with Hintermeister to give their team a 1-3-4 finish and 11 points. Another example was the high jump, where Jacob Ziebarth and Samuel Mechah gave C-I seven points with a 2-3 finish, as well as the discus, where the Bluejackets took second through fifth place for 10 more points.

Luke Olson led the way in the discus, finishing second with a 121-4 throw, followed by Cooper Laase, Logan Orr and Gunnar Nelson.

Cambridge-Isanti finished second in a quadrangular hosted by Big Lake on Tuesday, May 25. The Bluejackets total of 101 points was second only to Monticello’s 113 total – and was almost 70 points better than Becker in third.