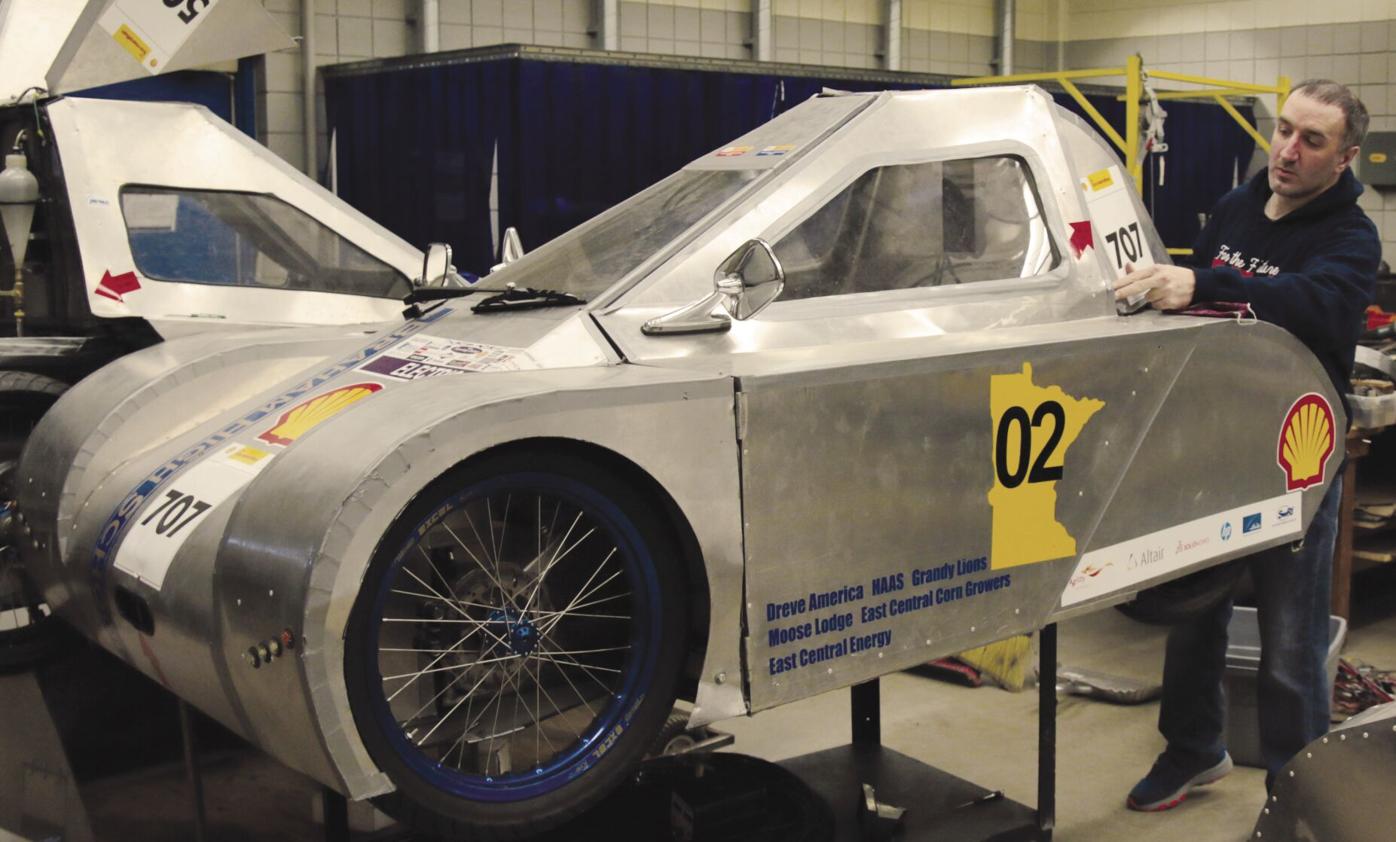 Luke Becker is seen here putting together the back end of his class’s supermileage car that nearly won first place at a previous national competition. Becker said they’ve had successful races in the past, but his class continues to make better cars every time. Photo by Sarv Mithaqiyan 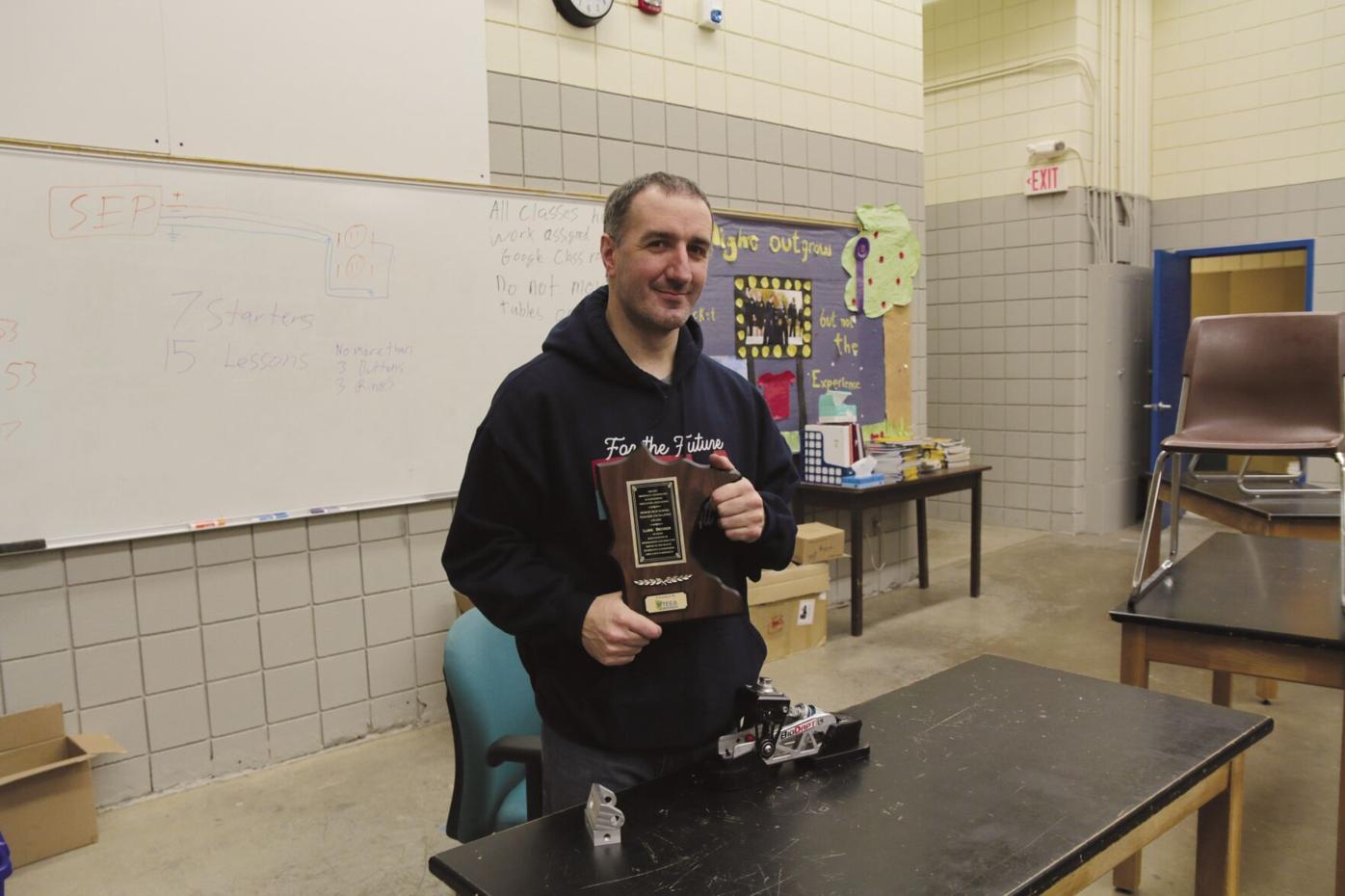 Luke Becker is seen here putting together the back end of his class’s supermileage car that nearly won first place at a previous national competition. Becker said they’ve had successful races in the past, but his class continues to make better cars every time. Photo by Sarv Mithaqiyan

A Braham Area High School teacher who has earned several awards of excellence this past year credits his passionate students for his success.

Luke Becker knows why he’s been honored with several teacher of excellence awards this year. The agriculture science and technology educator said he’s been lucky to have had passionate students in his classes.

“We don’t build things that don’t have a purpose,” Becker said. “It also gets the students to have a lot more pride in it.”

“You can open up a textbook and kids don’t always make the connection between … learning about force, energy, mass, gravity,” Gagner said. “But here, they’re putting it to use. … Whatever they’re working on, they can actually see it, touch it. Realize that there’s actually a purpose for this, so it’s going to make a difference.”

Becker attended the University of Minnesota and studied agriculture education, graduating in 2009. Then he went on to study and obtain his licensure in technician education, which led him to educate Braham students in subjects he enjoys for the last seven years.

A subject that he and his students work on is making, engineering and fine-tuning Supermileage vehicles that have been part of the state and national competitions, Becker said. In this particular class, students learn how to work with electrical wiring, welding and bodywork, as well as the mechanics involved with a racing vehicle.

“So we build these cars that go multiple 100 miles per gallon of gasoline,” Becker said. “And ... because we’re an agricultural program, all of our cars ... run on … ethanol E98 or E85, depending on which contest we’re doing.”

The successes of creating Supermileage vehicles, which have done well in races, in addition to innovating prosthetic legs and other technological devices, caught the attention of the National Aeronautics and Space Administration.

NASA requested Becker’s class to create a zero-gravity washing mission prototype for the Mars mission. His class received a $10,000 grant from the Lemelson-MIT InvenTeam program, which seeks to help students from underrepresented backgrounds learn problem-solving skills, to build the prototype, he said.

“I’ve got nine students who’ve been working on it all summer long,” Becker said.

His class recently ordered some cylinders for the washing machine manufactured by Aurelius Manufacturing, about 600 yards from the school, he said.

Other schools also offer hands-on education opportunities such a as Becker’s; however, he feels that his classes do more for the students.

“I’m insane about some of these projects,” Becker said. “But … the teacher side of it is easy. It’s just you take the project that’s at hand and turn it into a lesson so that when the end of the day comes around, a student has an opportunity to learn what they need to know, to the standards.”