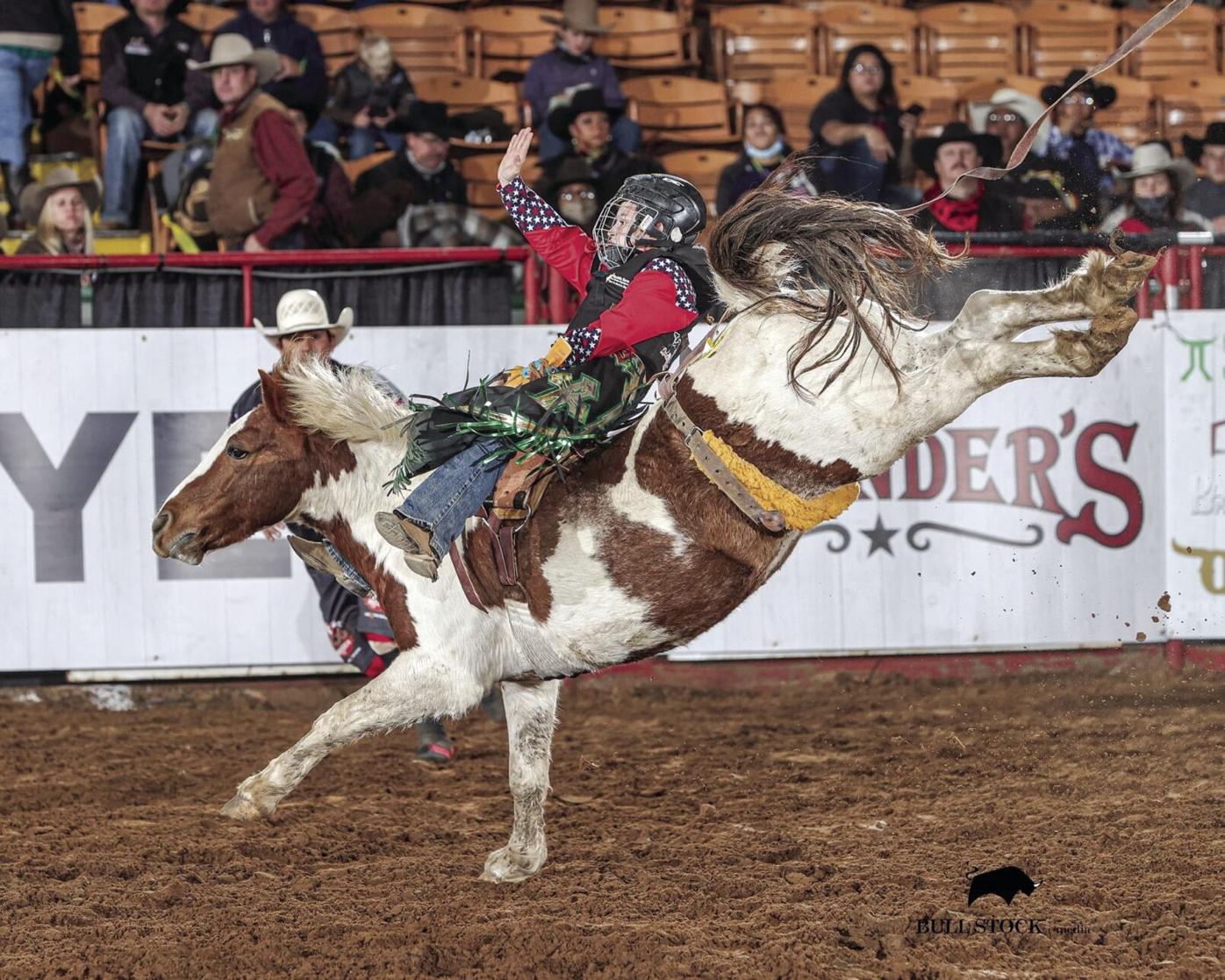 Joey Lindberg practices rodeo by traveling to Iowa on weekends, and competitions have taken him to Oklahoma and Texas, among other destinations. 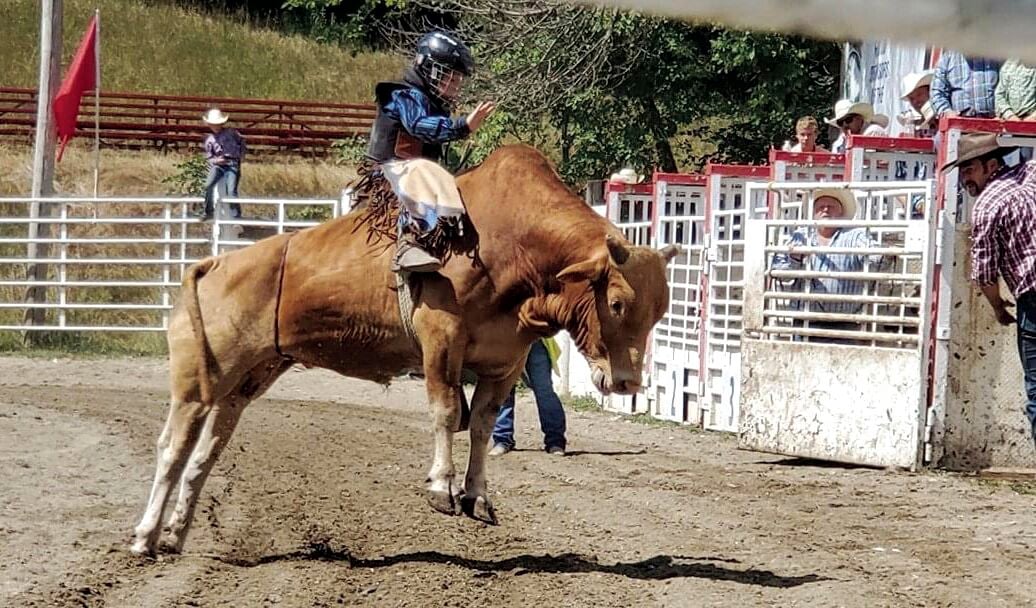 Joey Lindberg has been competing in roughstock events. 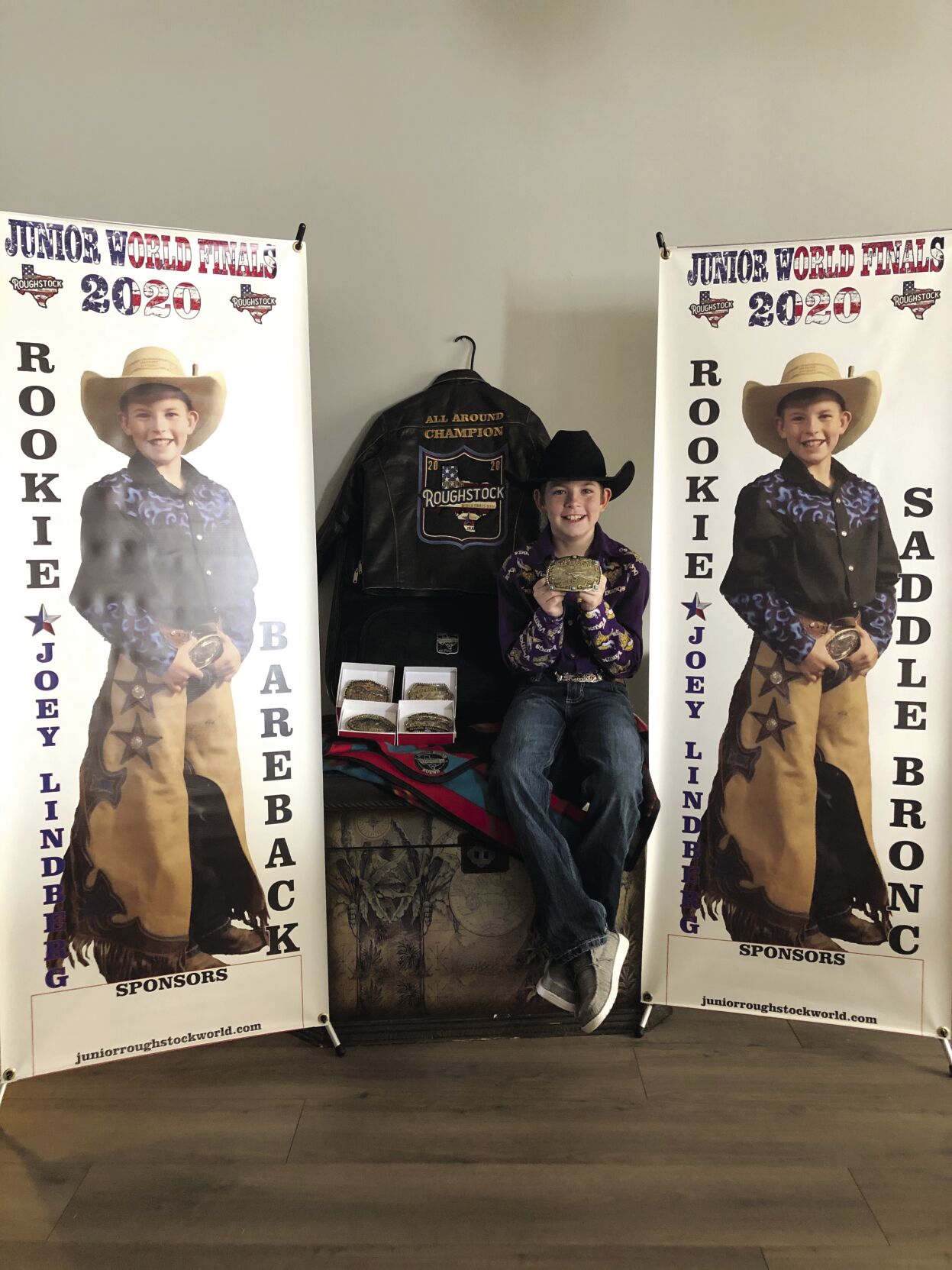 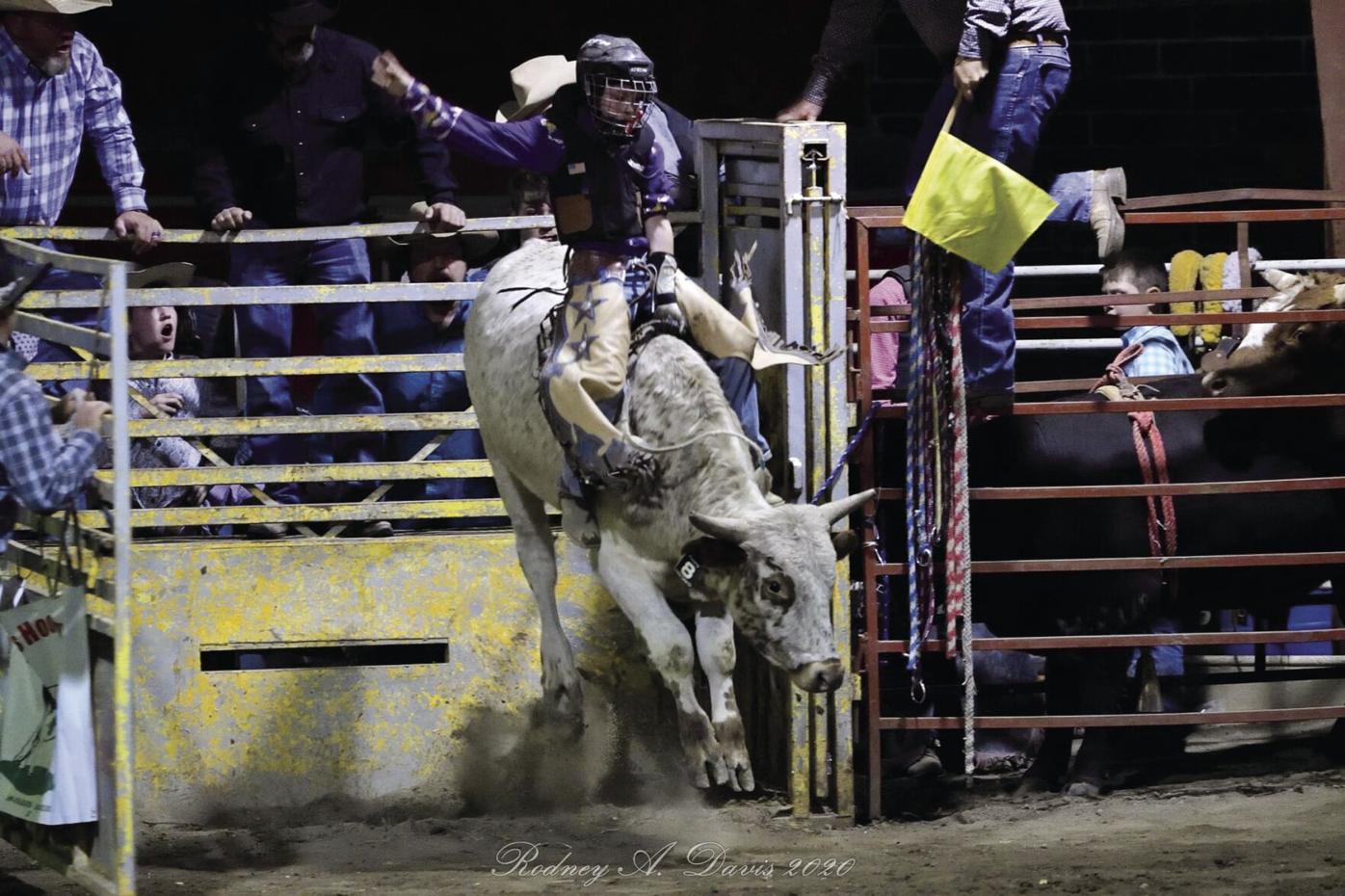 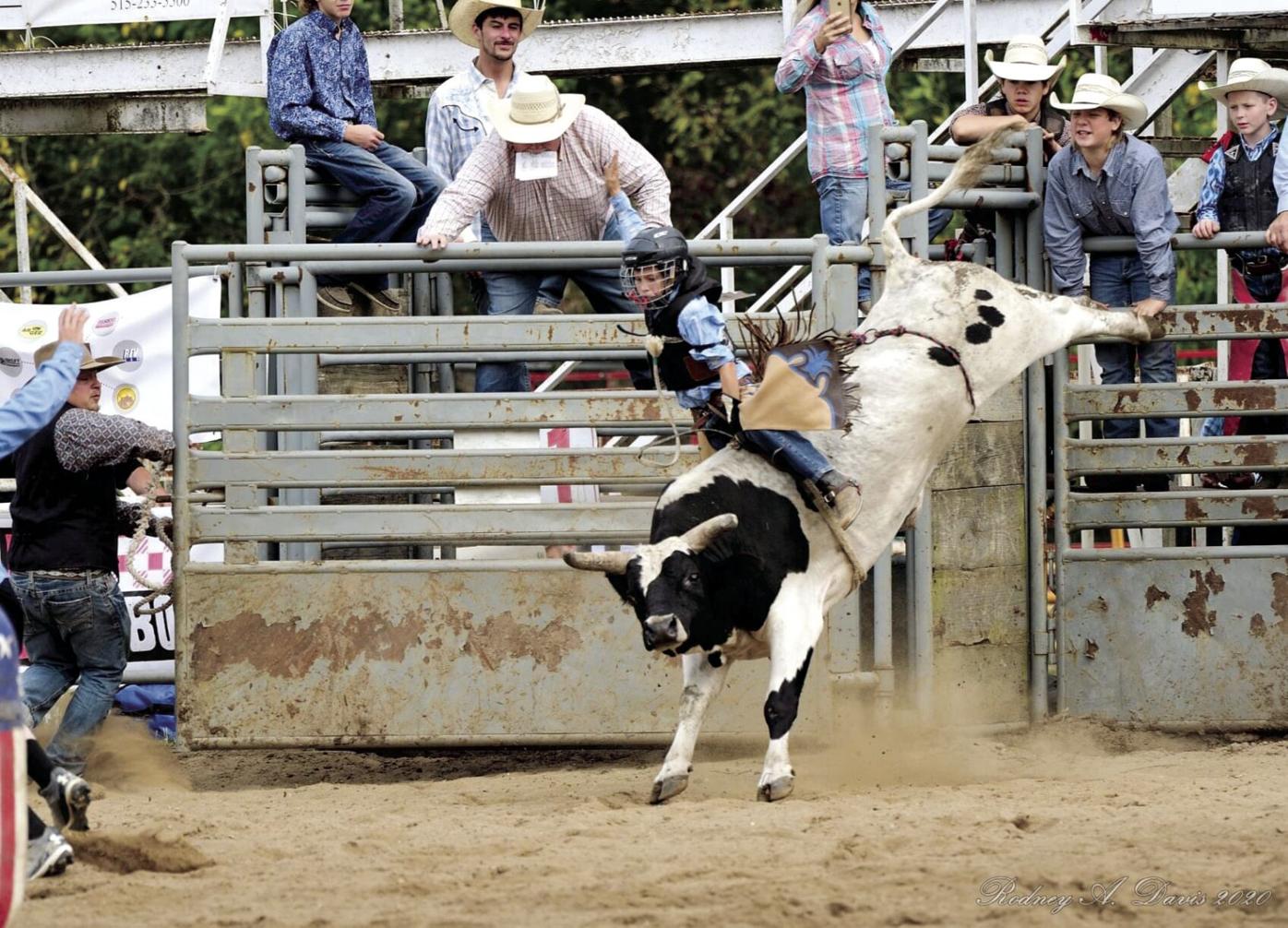 Joey Lindberg practices rodeo by traveling to Iowa on weekends, and competitions have taken him to Oklahoma and Texas, among other destinations.

Joey Lindberg has been competing in roughstock events.

In rodeo, events where competitors ride wild horses and bulls are called “roughstock” events because riding large and powerful animals that do not want to carry a human being on their backs can be, well, rough.

Cambridge resident Joey Lindberg certainly can attest to that.

“My first ride on a saddle bronc, I got dragged around a little bit,” he admitted. “My foot got stuck in the stirrup, and when I finally got my foot out, the horse stepped on me. I got a perfect hoof print right on my chest.

“I think it was my fourth or fifth ride where I was thrown for the first time. I went 15 feet up in the air over the front of the horse, and I landed on my arm – and I broke my arm in two spots. I came back to ride with a cast on my arm, and people asked me, ‘How are you still here?’”

The 13-year-old Lindberg, a seventh grader at Cambridge Middle School, paused for a moment before answering that question.

“It’s all about going back – if you don’t go back, you won’t get any better,” he said. “You have to keep trying and work at it as hard as you can.”

That performance showed just how far Lindberg had come since entering his first competition on Memorial Day in 2019. His plan was to barrel race, but when he got to the competition, his plan quickly changed.

So he overcame his fears and got on a barebacked horse for his first “ride.”

“I was afraid I was going to die,” he admitted. “But I got into the chute, and as soon as I was set up they opened the chute. The ride went decent – I didn’t get hurt.

“And I was extremely nervous, super scared, about the bull riding. But it went good – I didn’t get hurt. It was intense and crazy. I wanted to do one thing, and the bull wanted to do something else.”

“I remember the David Berry Monster Bull Camp in Oklahoma, where he would videotape each ride,” Lindberg said. “When the ride is over, he uses the tape to teach you. The first thing he tells you is something you did right. Then he’ll tell you what you did wrong, but he also finishes with something positive, so you feel good about yourself.”

Lindberg said that hard work has made him a more polished rider and helps him overcome his small size. He stands just 4-7 and “I’m 70 pounds only after eating a lot of food,” he said.

“Now I know more about technique: I know to keep my arm inside and my feet in,” Lindberg explained. “I get nervous sometimes, but I remember that it’s a lot of fun.”

Lindberg said his goals for the Junior World Finals in December were much more simple than to win or place well.

“I just wanted to try my best,” he said. “I set a goal for myself to ‘cover’ two horses, because the year before I had covered only one, so I was happy to accomplish that goal.”

To “cover” means to complete the ride without falling off.

Lindberg will return to action at the International Miniature Rodeo Association World Finals in Guthrie, Oklahoma, starting at Jan. 12. And he is excited for the opportunity to compete at the junior high level in the Minnesota High School Rodeo Association later this year.

Lindberg gave thanks for his development to professional instructors such as David Berry, John Graham, and John Jensen as well as to his parents, Brent and Angie.

“Those are the guys who taught me to ride,” Lindberg said of Berry, Graham and Jensen. “And if it wasn’t for my mom and dad, I wouldn’t be able to do this. They pay for it, but my dad sits out there for hours helping me with the stationary bull. And my mom will make videotapes to show me what I did, and she drives me everywhere.”

Those sponsors, as well as all the people who have supported him, are the reason Lindberg said he did not quit after those early mishaps.

“When I thought about quitting, I would remember how many friends I had made there, and how nice everyone was,” he said. “I realized that if I quit, I was quitting on those folks, too. I didn’t want to quit for them. That was how I talked myself into going back.

“Now my blood pumps every time I go out there. When the chute opens, it’s a feeling that is hard to match.”