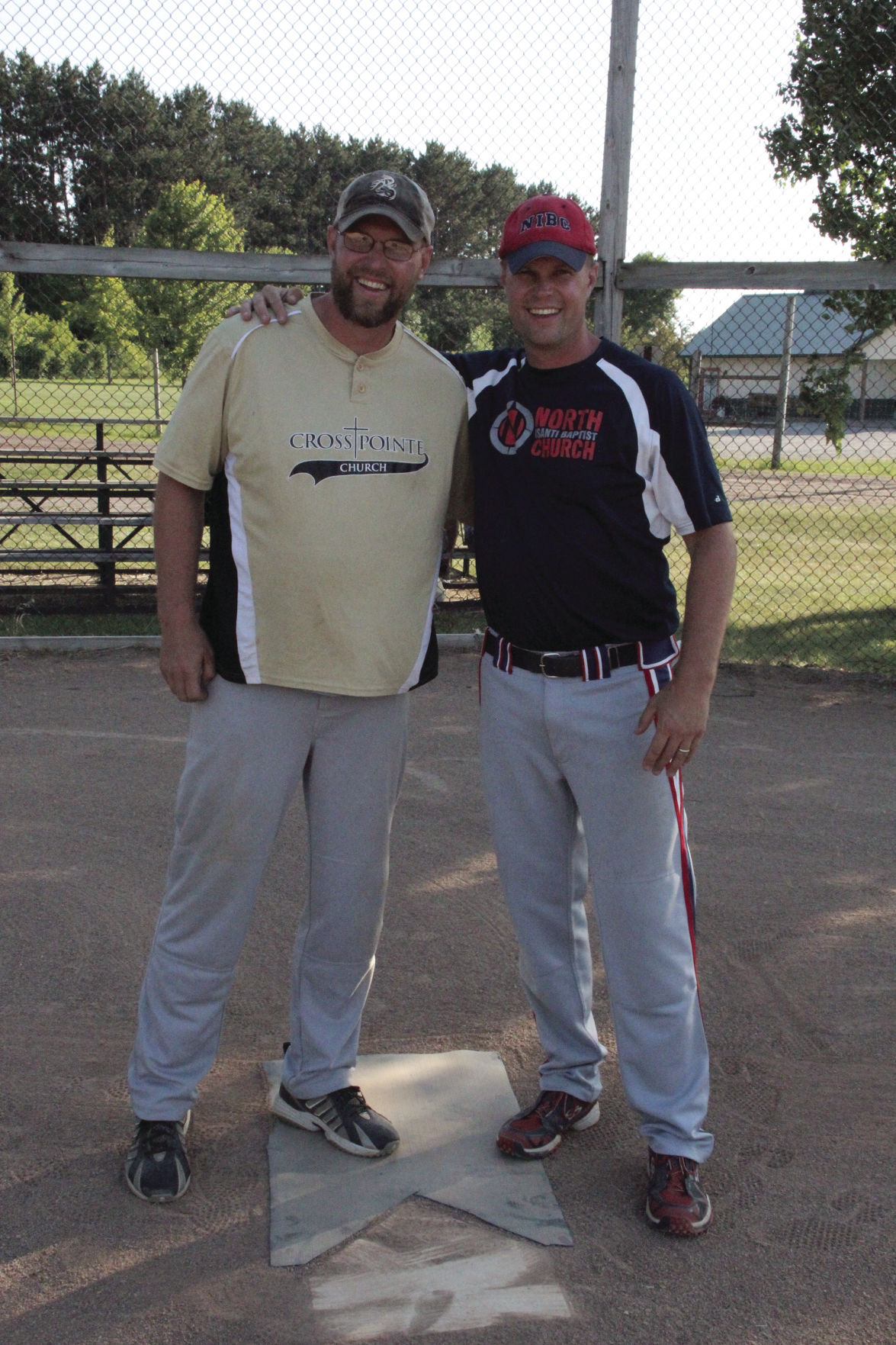 Brothers (left to right) Nick and Ben Wolcyn faced of for the first time as opposing team coaches for their church league. Photos by Tiffany Kafer 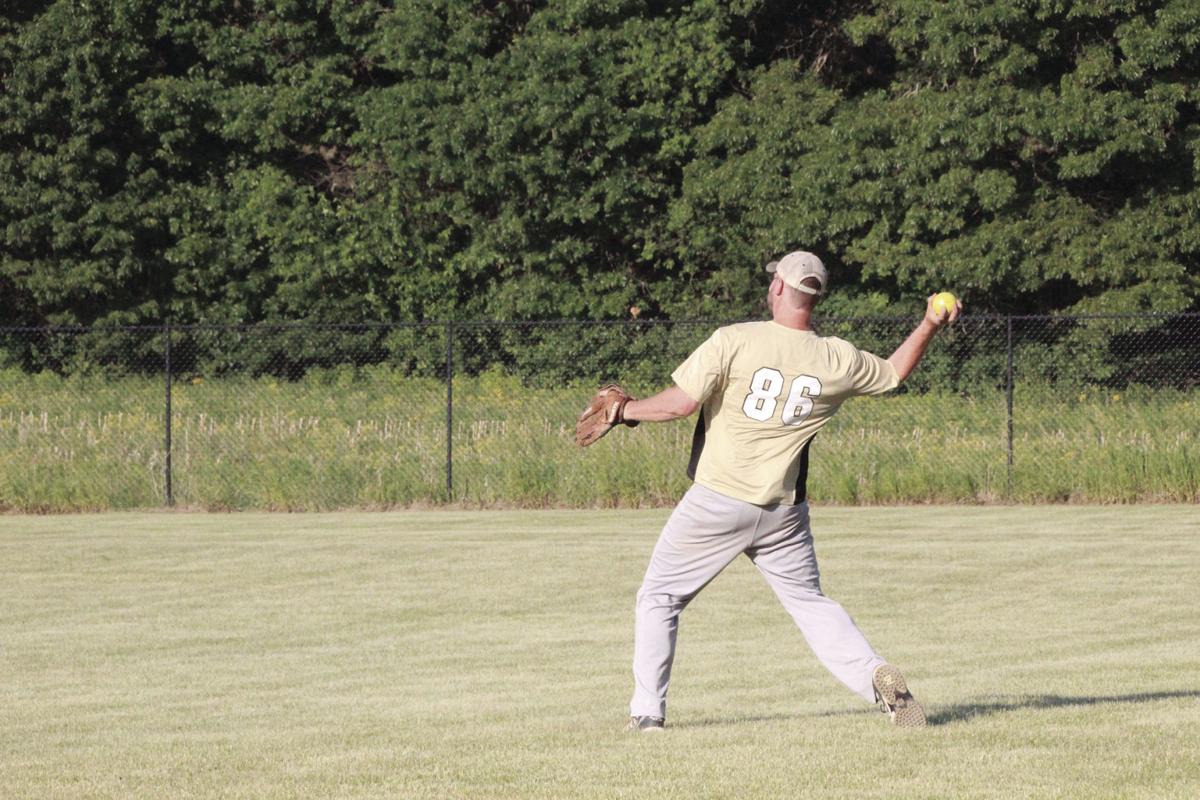 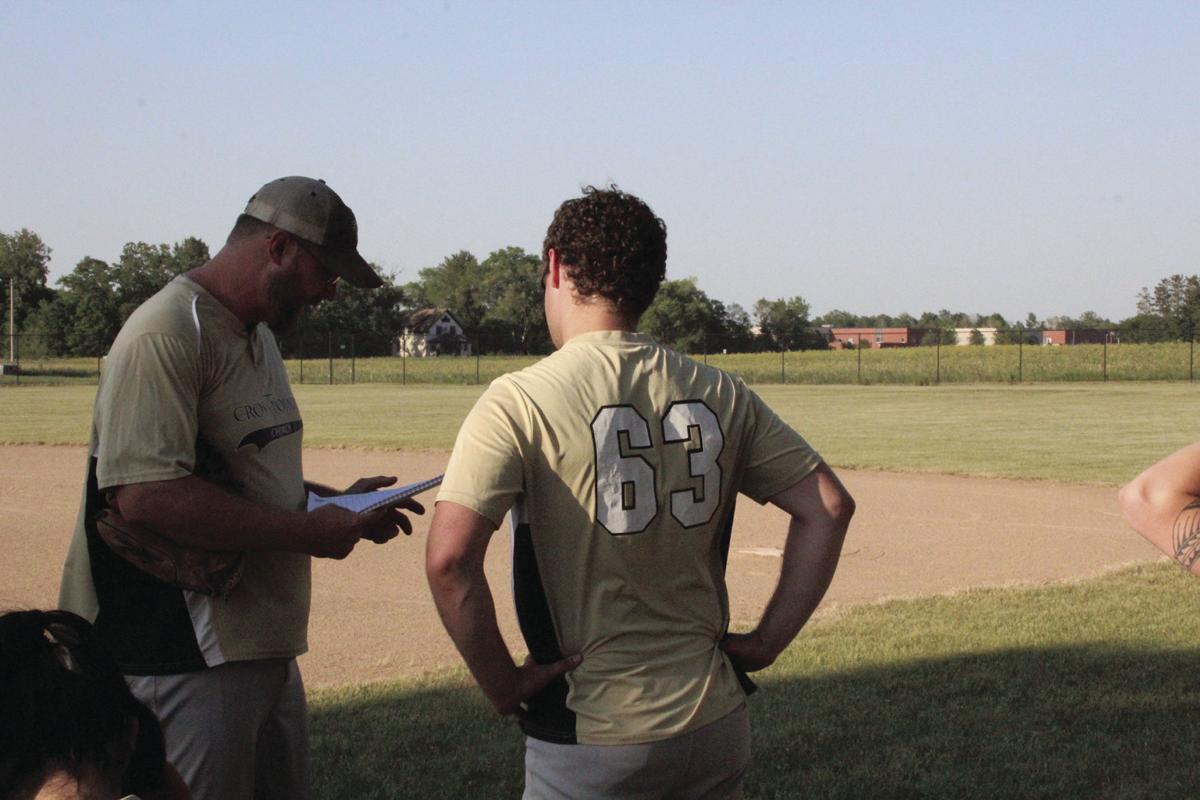 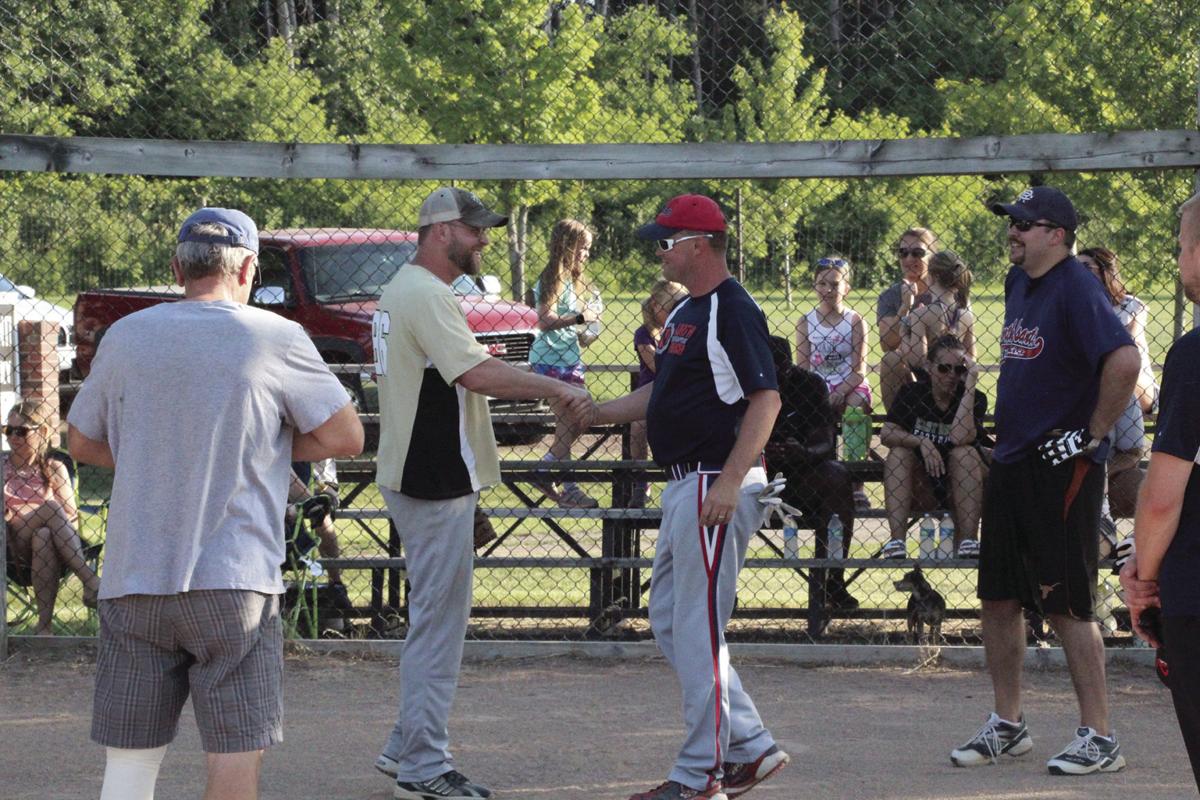 The Wolcyn brothers of Cambridge, Nick (left) and Ben, shake hands before their softball game on June 16. 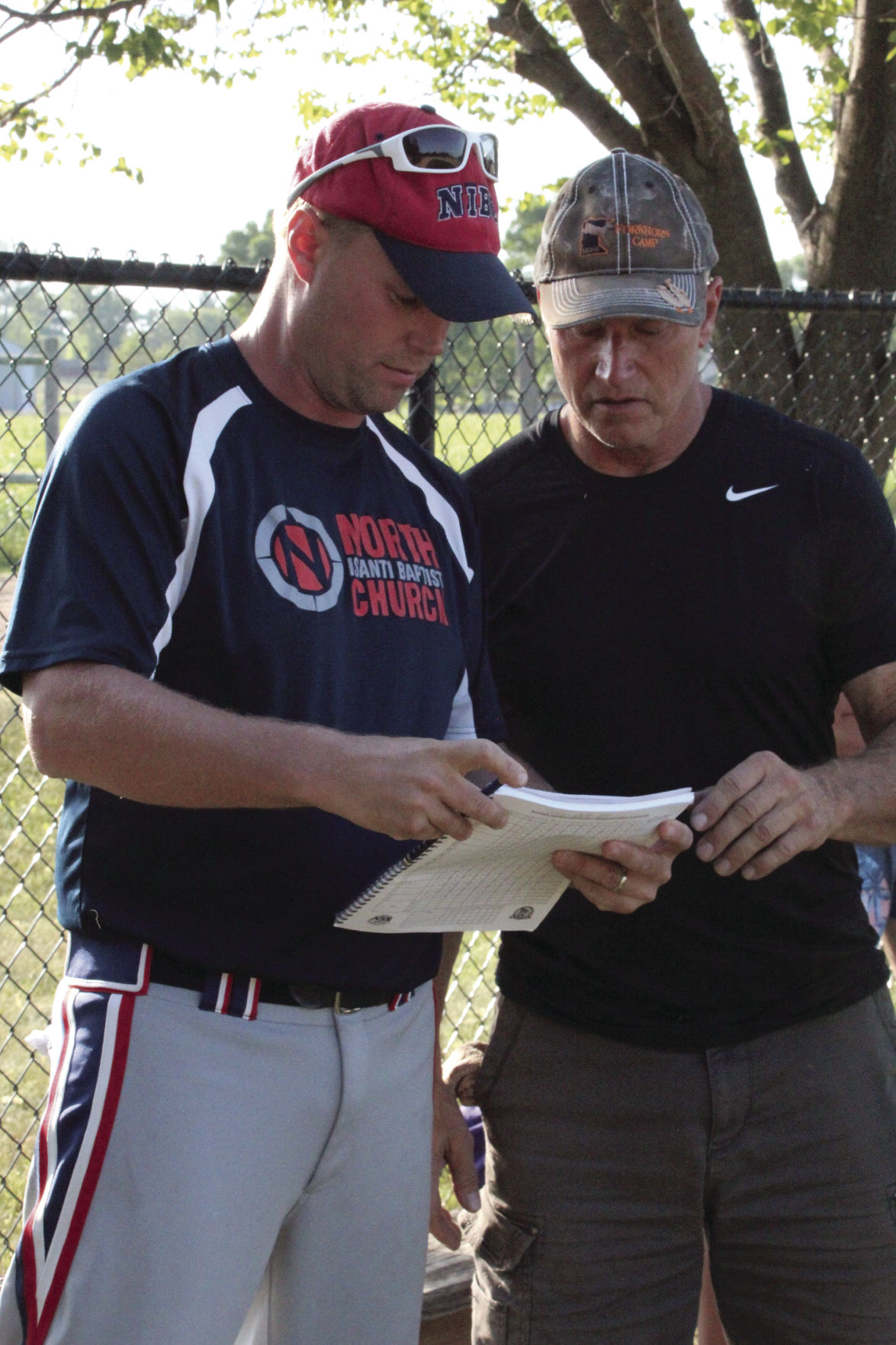 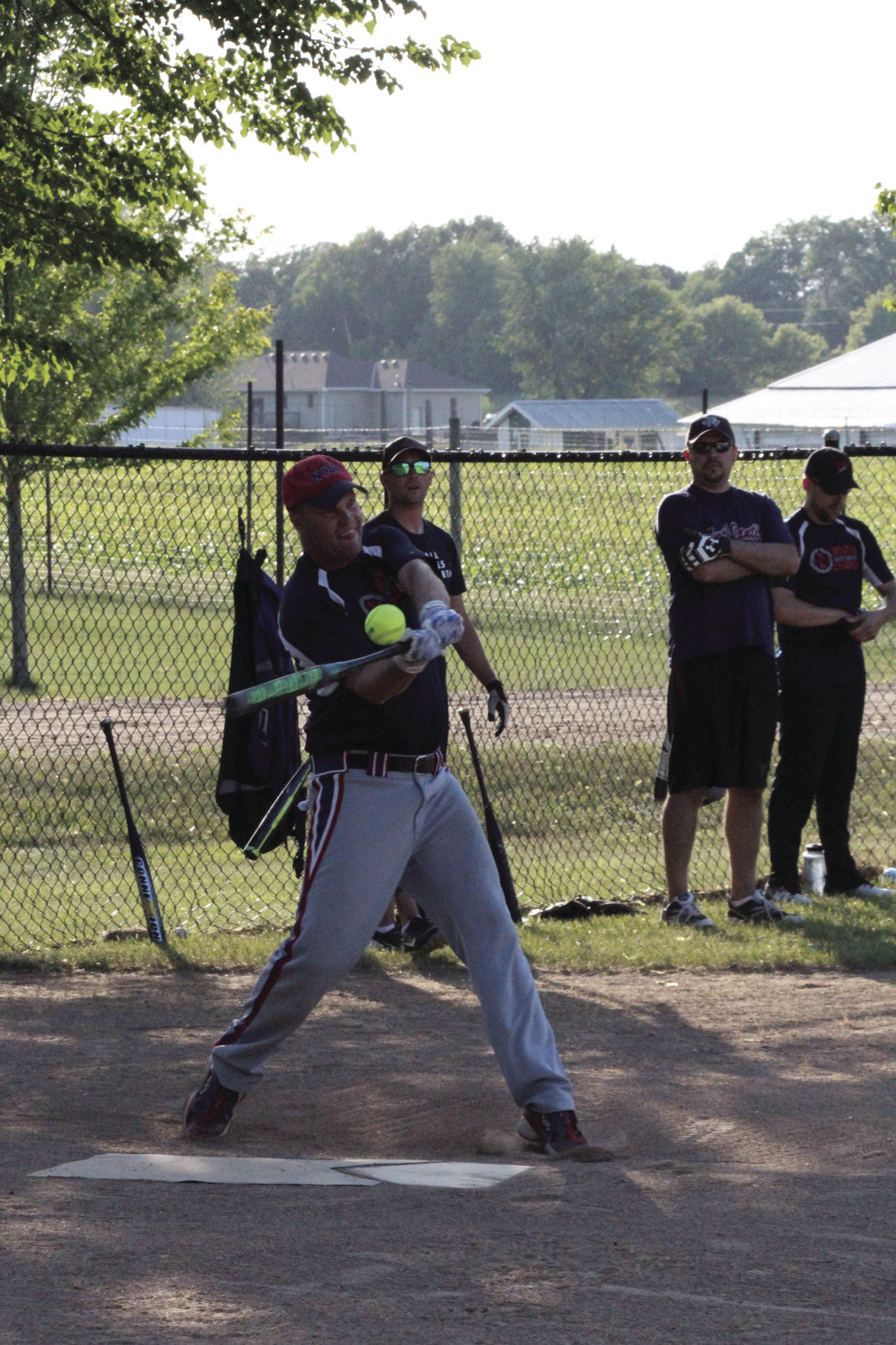 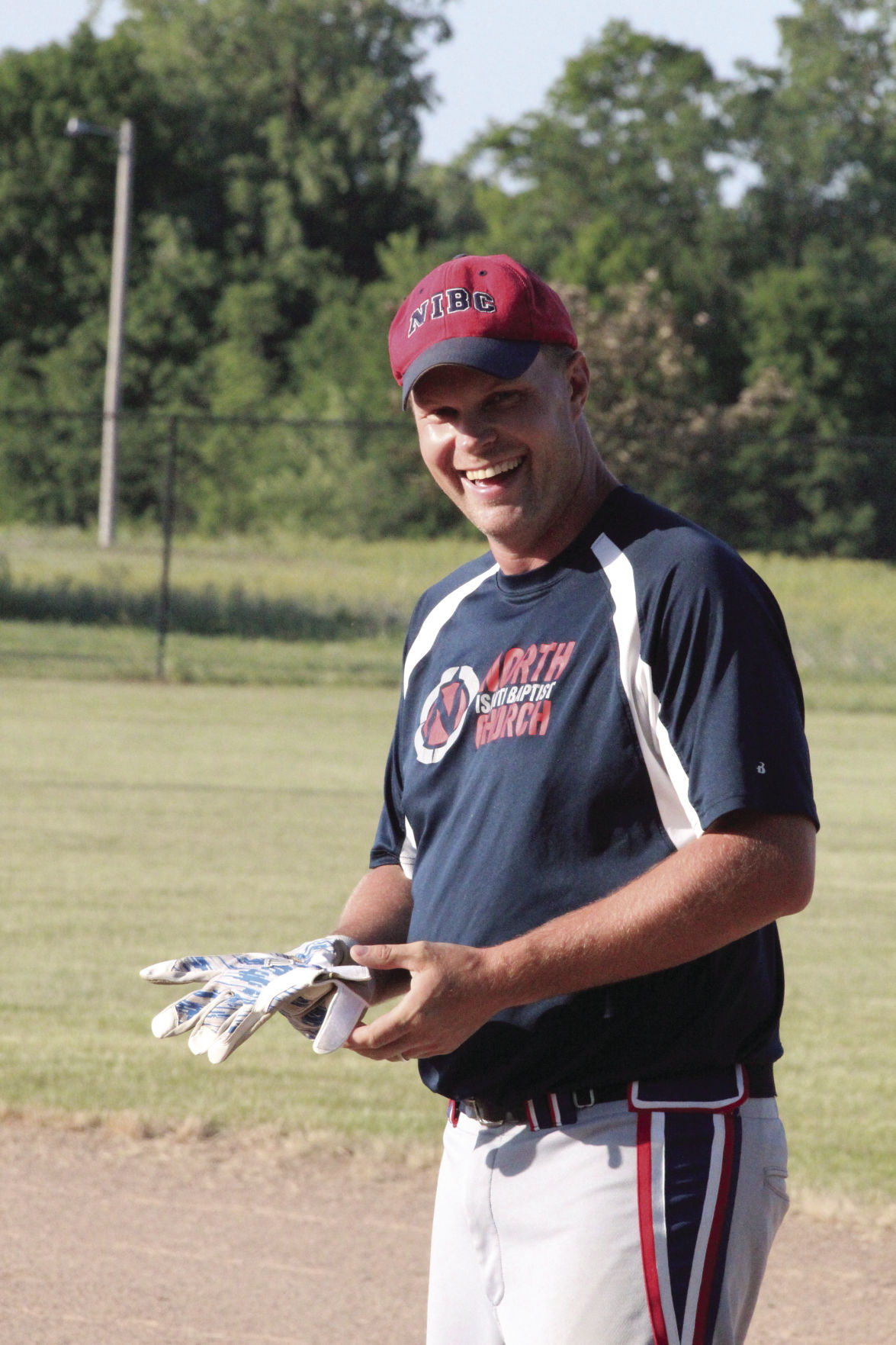 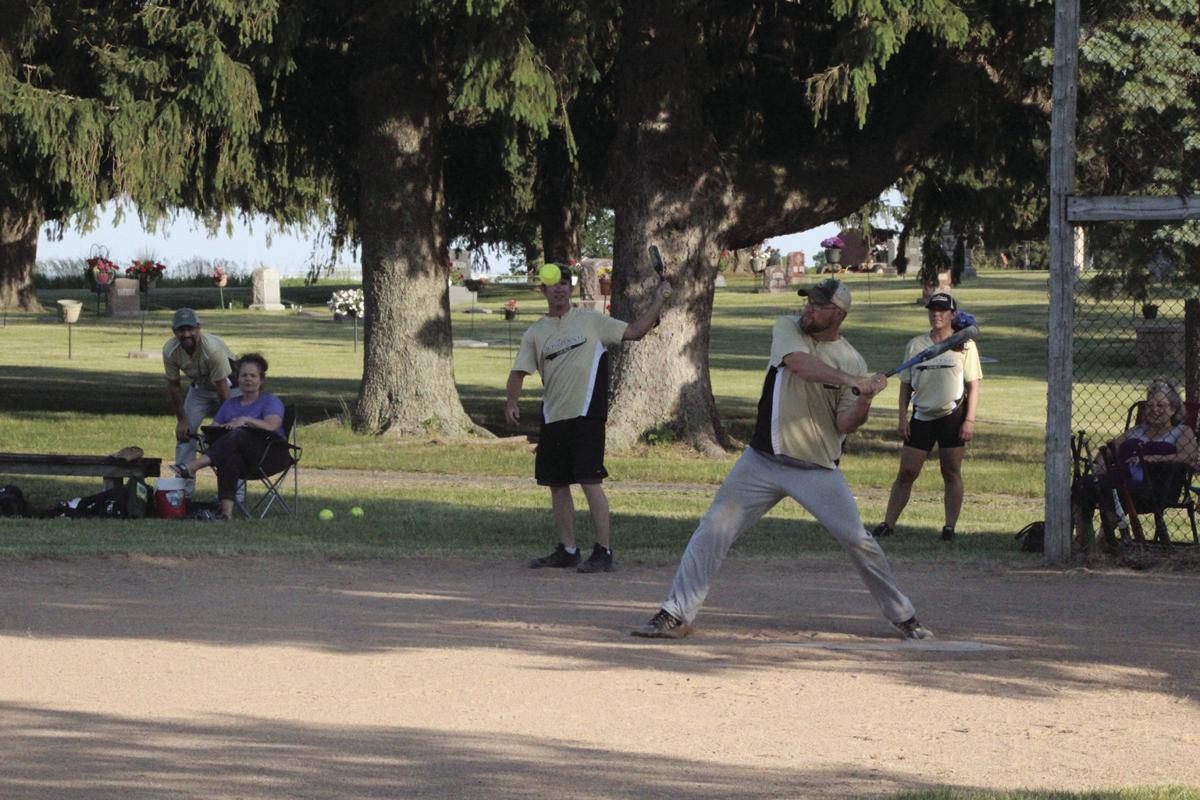 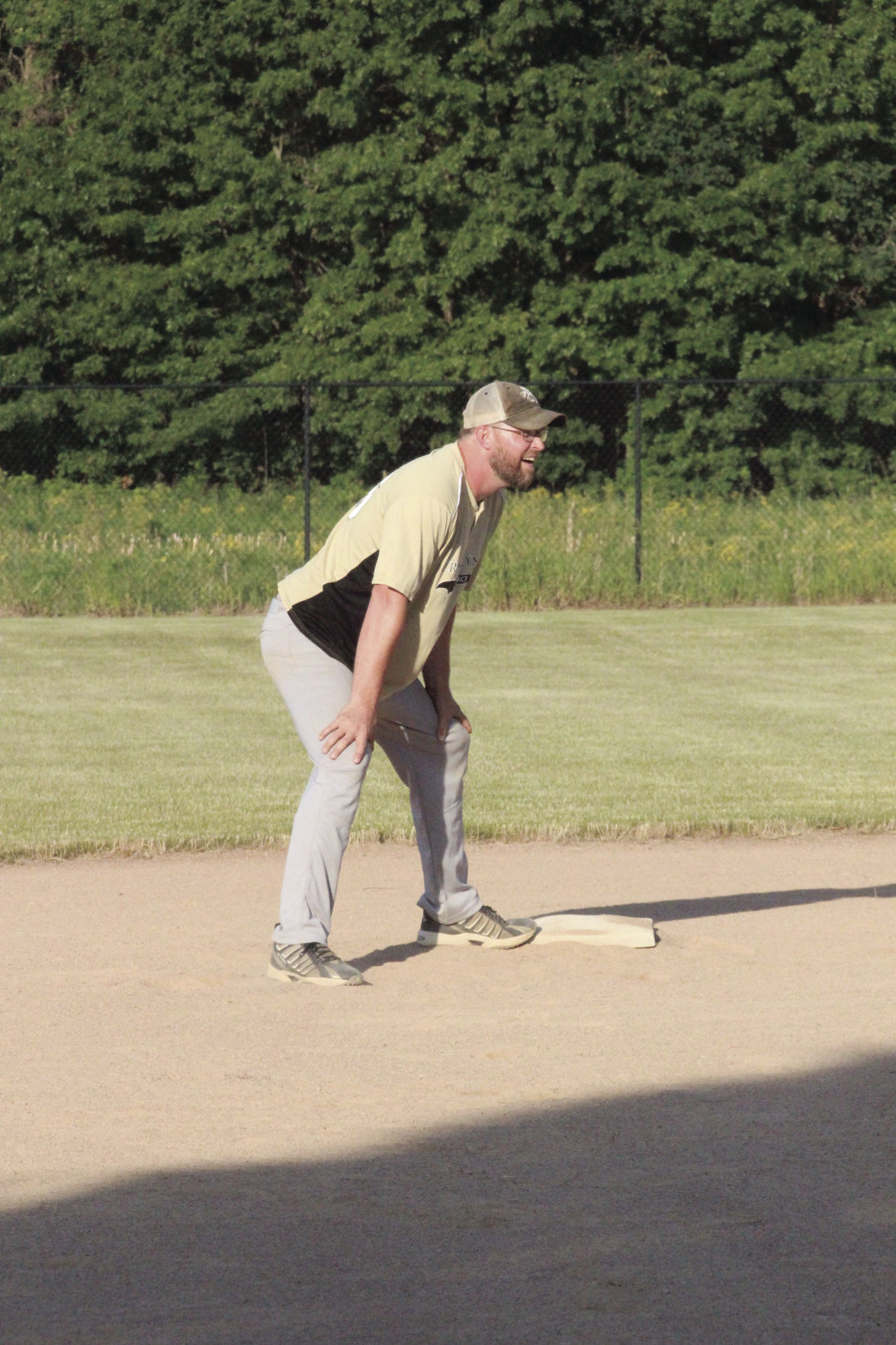 Nick Wolcyn prepares to run to third base during his church softball league’s June 16 game.

Brothers (left to right) Nick and Ben Wolcyn faced of for the first time as opposing team coaches for their church league. Photos by Tiffany Kafer

The Wolcyn brothers of Cambridge, Nick (left) and Ben, shake hands before their softball game on June 16.

Nick Wolcyn prepares to run to third base during his church softball league’s June 16 game.

For Nick and Ben Wolcyn, of Cambridge, the baseball field feels like home, a place their grandpa and dad played, a place they’ve come to love and a place they’re excited to be able to return to — even if it is facing off against each other as coaches.

“Way back, my Grandpa Bernard played professional baseball with the Detroit Tigers and in the minor leagues for the Minneapolis Millers, so as a kid we grew up with baseball,” Ben said. “My grandpa then of course got my dad into baseball, and then he played for the University of Minnesota Gophers, and when he graduated he assistant coached there as well and then went on to be the head coach at Bethel University.”

The Wolcyn brothers love for baseball was what lead them to take on the task of becoming coaches for the Dalbo Area Ministerial Softball League; Ben coaching the North Isanti Baptist Division I team, Nick coaching the Cross Pointe No.2 Division I team.

“As kids we learned a lot about baseball. There was always a ball game on, so it’s always been a part of what we do and we enjoy it. Now, playing against my brother’s team tonight is going to be fun; we are looking forward to it,” Ben added.

Both brothers were excited to hit the field on June 16, where they faced off against each other for the first time as the opposing coaches.

“I’m feeling pretty good about tonight. Our team’s been in Division II for the past four years, so we’ve worked ourselves up to this point playing in Division I,” Nick said. “We also picked up two players from our Division I team, which we feel really good about. It’s always really fun to play North Isanti.”

“Tonight’s going to be different since years past, because we have different players that don’t know him as well, and he has players that I’m sure don’t know me, so for them it won’t be that big of a deal,” Ben said. “For me, it would still be fun to beat him, but as we’ve grown in age, it’s not as important.”

“I’ve got friends on both teams, so it’s fun to cheer for the people you know, no matter what team they are playing on,” Nick said.

Cheering for his brother while also trying to defeat his team is a battle for Ben, but not only that, it’s a battle for their mom, Adie, who sits in the stands and cheers for both.

“I cheer for all of them,” Adie said. “When one son is up to bat, that’s who I cheer for; gets confusing sometimes.”

The Wolcyns’ league is a modified coed softball league, which requires two women in the field and in the batting order, has three divisions with both Ben’s and Nick’s teams playing in the most competitive, Division I; however, the boys haven’t always been on the most competitive of teams.

Ben’s and Nick’s baseball stories began at the T-ball level, and up until high school they both played school ball on the same team — Ben as catcher and Nick as pitcher. In high school the boys moved on to other sports, but as adults returned to baseball in the form of their church softball league.

“The thing I really like about this league is that the churches are local — Cambridge, Isanti, Dalbo areas, one from North Branch we added this year — and it’s a camaraderie,” Ben said.

In his ninth season coaching the North Isanti Baptist softball team, Ben’s story has been an adventure since day one, and being back on the field has reminded him of his love for the sport.

“It is really a cool story how I got started coaching. I used to umpire a lot of games for the state high school league and for town team baseball, and when you umpire you’ve really got to love the game because you end up taking heat from both sides, especially the higher up you go,” Ben said.“So when we started having kids, I figured it wasn’t really something you take your kids to, so when Siena was diagnosed with leukemia, I hadn’t gone back to umpire since then.

“Before she was diagnosed I’d planned on umpiring and jumping in the softball thing for church; it was really cool how it worked out. The guy who used to coach the team said he’d heard about my daughter and asked if I still wanted to coach and I told him I did,” Ben added.

For Ben, being in the field was a break from reality, a time where he could take a breath and just play the game his family had grown up to love.

“My first year was really a comforting year. It was really the only time we weren’t in the hospital, so it was Tuesday nights we had ball and everyone treated you the same and you didn’t have a million different questions about health,” Ben said. “It was really cool how the Lord worked during one of our games. Curtis Larson, a guy we went to high school with, was coaching the other team during the first game I ever coached at, and they passed a cap around and raised money for us as we were going through Siena’s battle, and it came out to be the exact same amount of money that I would’ve earned umpiring.”

“The Lord was really confirming that I was in the right place,” Ben added. “So that first season, it was more of giving back, instead of everyone giving to me.”

Nick: coach for the Cross Pointe Church No. 2 team

In his sixth year of coaching his church team, his 15th year playing and Nick’s first year coaching the church’s division one team, his passion comes from the motivation to be in the field playing amongst friends.

“I was on the other team, the Cross Pointe No. 1 team, for years. Our team was really good and we won the championship one year and came in second three or four times in a row,” Nick said. “We had a bunch of players that wanted to play, but we didn’t at that time have a coach for another team, so that’s when I volunteered to be that person and jump on board as a coach.

“We’ve never had a shortage of people wanting to play; our problem has been having so many people that want to,” Nick added.

Being able to get out on the field and play among so many others that just want to have fun playing a game Nick and his family have grown up to love, is what has kept him coming back every year.

“I look forward to playing every year; it’s so much fun to get out in the field and play church softball with all of the people I’ve met in church. We have a common bond as Christian brothers and sisters that enjoy doing an activity together, which is how it started for me,” Nick said.

“It just really feels great to be back out here, and the normalcy of it,” Nick added.

Hopes and changes for this year

Despite beginning the season a couple of months later than years past, teams are excited to be back in the field and look forward to a fun year.

“We usually start the beginning of May and have a year-end tournament in August where all 20 teams will play a two-day double elimination event,” Ben said. “We’ve had a few league rule changes for this year because of COVID: no sunflower seeds, no spitting, and the biggest thing is no handshakes, which have been replaced with a wave at the end of the game.”

“Being able to get back out in the field makes it feel like summer again. We’ve been doing this every spring and summer for the last 15 years,” Nick said. “When we finally got the go ahead to get going on this, we knew it would be good for everyone.”

“It’s just really good to see everyone and be able to get together,” Nick added.

Three years in a row North Isanti Baptist has finished second in the end-of-the-year tournament. With hopes to come out on top one year, Ben said the team has been working hard but is missing some regulars.

“The last three years we’ve finished second and we were really hoping to jump to the top this year though we’re missing quite a few players from the past years,” Ben said. “It’s a little bit of a different team this year, which has been kind of a fun new experience too.”

“We look forward to a really fun year,” Nick said.

With a score of 16 for Cross Pointe and 13 for North Isanti Baptist at the end of the June 16 game, both Wolcyns agreed it was a good game.

“It was fun for me, but it was just another week of softball for most of our team, as we have a lot of new players this year,” Ben said. “I look forward to playing them again in the regular season and hopefully in the year-end tournament.”