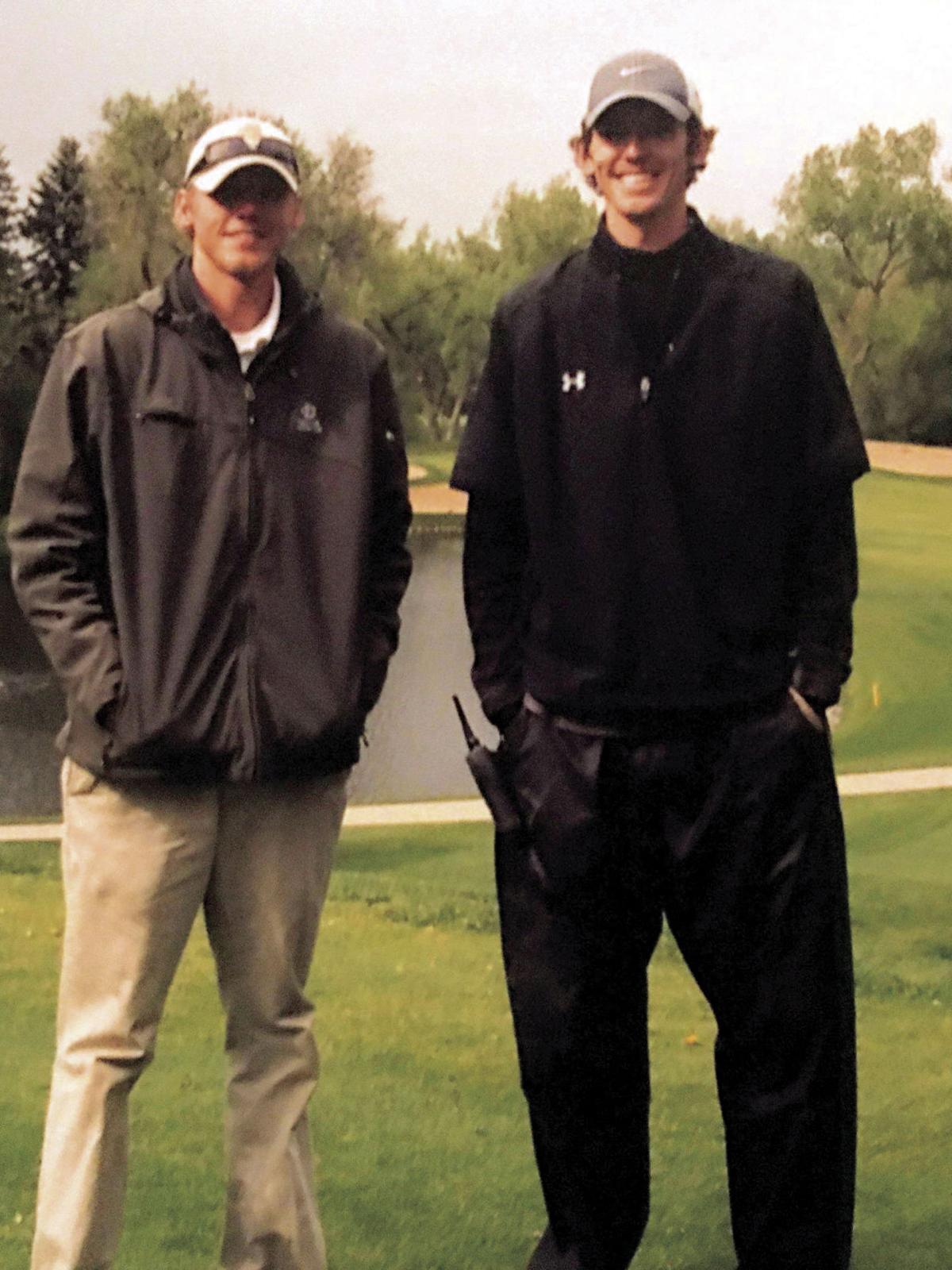 Mitch and Marty Savage worked together at Denver Country Club in 2010. Submitted photos 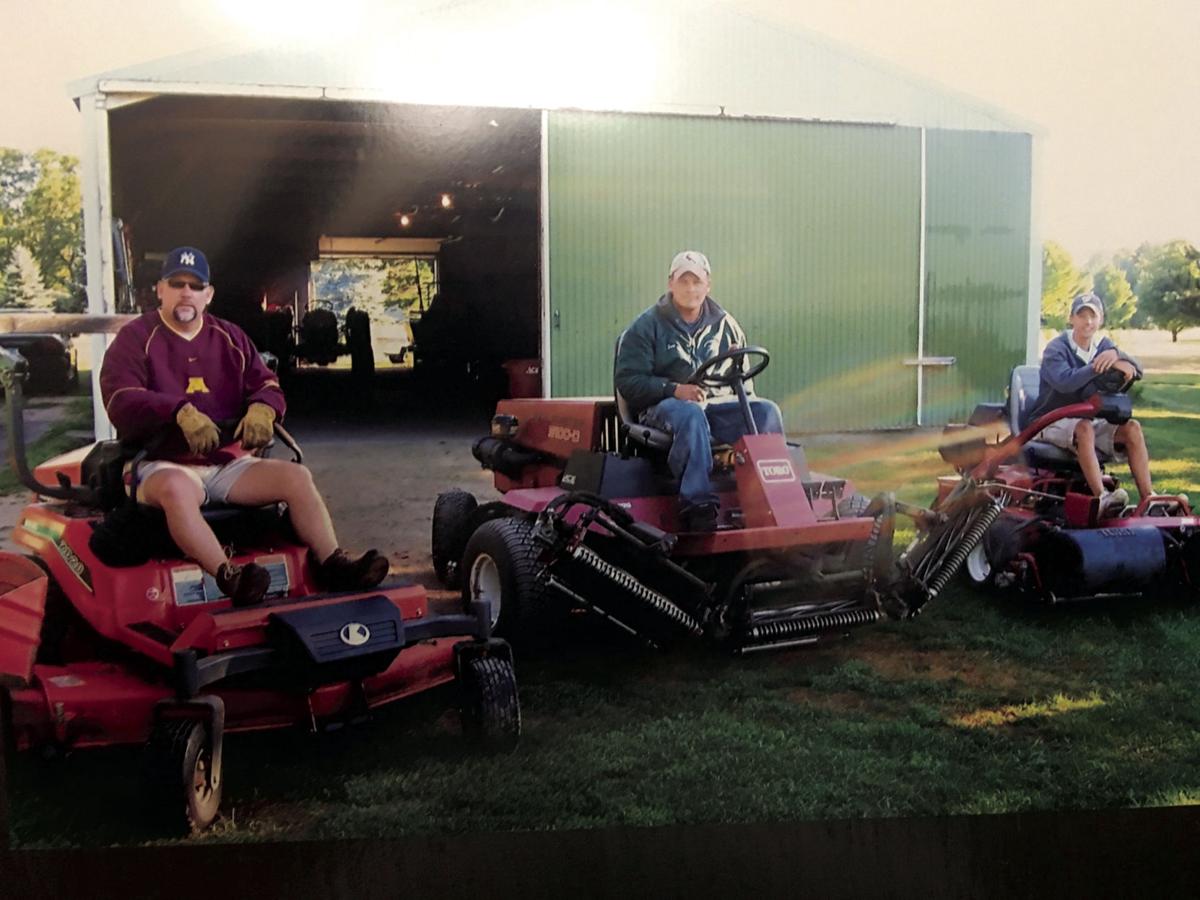 This is where it all began for the Savage family: Father Mark, left, and oldest son Mitch, right, sandwich Jake Warneke while working together at North Branch Golf Course. 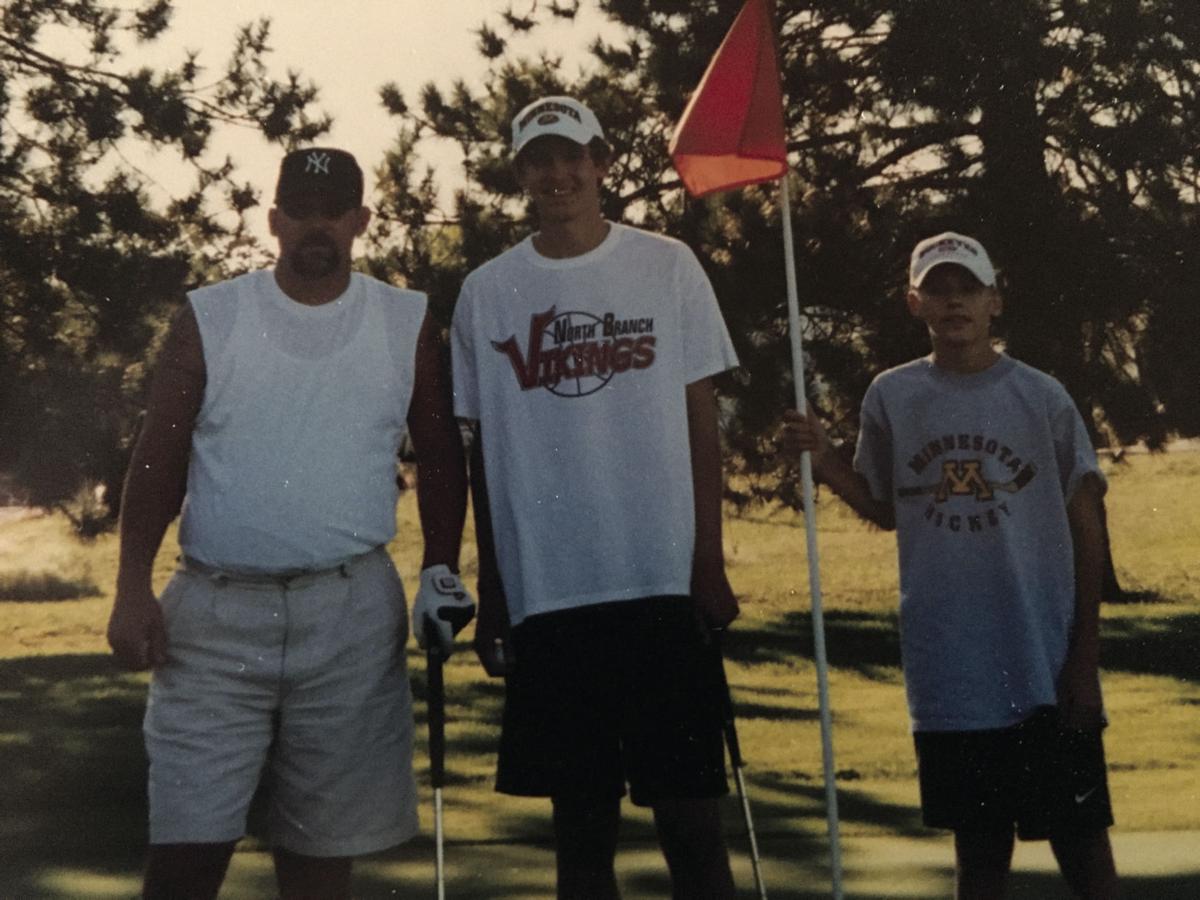 When Mitch Savage, center, was not working at North Branch Golf Club Course, he would take his father Mark, left, and younger brother Marty, right, to play a few holes of golf during the summer of 2000.

Mitch and Marty Savage worked together at Denver Country Club in 2010. Submitted photos

This is where it all began for the Savage family: Father Mark, left, and oldest son Mitch, right, sandwich Jake Warneke while working together at North Branch Golf Course.

When Mitch Savage, center, was not working at North Branch Golf Club Course, he would take his father Mark, left, and younger brother Marty, right, to play a few holes of golf during the summer of 2000.

When Mitch and Marty Savage grew up together in North Branch, golf was not really part of the picture.

“I grew up playing baseball and basketball,” Mitch Savage said. “As a family, we were passionate baseball fans – particularly of the Minnesota Golden Gophers.”

“Whenever the University of Minnesota baseball team played a home game, we were there,” Marty Savage said.

Then in the summer of 2000, Mitch received a call that would change not only his life, but his brother’s life as well.

“Mike McDougall was the superintendent at North Branch Golf Course, and in the summer before my senior year, he was looking for some help,” Mitch said. “I thought, ‘Why not?’ It seemed like a good summer job. Then as I worked at the course, I started to get the itch to swing a club and see what the game is all about.”

At that time Marty was about to enter the seventh grade.

“Mike gave us an old set of clubs, and we would hit balls in the early morning before Mitch had to go to work or on Mitch’s day off,” Marty said. “But other than driving past the golf course to get home, that was my only contact.”

So imagine how improbable it is that Mitch, who graduated from North Branch in 2001, and Marty, who graduated in 2006, are both golf course superintendents.

What’s more, both are superintendents of two of the most highly regarded golf courses in suburban Denver: Mitch works at CommonGround Golf Club in Aurora, while Marty is the superintendent at Broken Tee Golf Course in Engelwood.

How did two brothers born five years apart bridge that separation? Easy: There never was any separation.

“We grew up best friends, and we did everything together,” Mitch said. “We had the same likes and dislikes. We were two peas in a pod – the only thing different was that we were separated by five years.”

Marty agreed, adding, “We always had the same interests growing up, and it was ingrained in us that we would look out for one another and love each other.”

Mitch gets a job

Mitch Savage really loved that summer job at North Branch Golf Club. He loved it so much, he decided to make a career out of golf course management.

“I never had any doubts – I knew this was what I wanted to do,” Mitch said. “Every season I learned more on the course, and that increased my interest and my love for the job.”

Mitch said he expected he would work at a course in Minnesota after graduation. But a comment from his college advisor at Minnesota, Brian Horgen, sparked Mitch’s desire to get a job elsewhere.

“If someone would have asked me, I would have thought I should get an internship somewhere in the Cities,” Mitch said. “Dr. Horgen suggested I apply for an internship out of state, just to extend a few feelers. And I landed an internship in Aspen, and that was the most memorable summer of my life. It started me on my path.”

“That summer they hosted the U.S. Women’s Open, so I hit the lottery,” he said. “I got to work at a high-end golf course, worked a U.S. Open, and got to see Denver.”

After graduating from Minnesota in December 2005, he landed a full-time job at Cherry Hills before venturing to California in 2008.

“Looking back, I wish I would have stayed in Colorado,” Mitch admitted. “But it was an opportunity that presented itself, and I got a chance to see what Southern California was like.”

In 2009 Mitch returned to Colorado to work at Denver Country Club, then in 2013 he moved to Green Valley Ranch. In 2018 he was named head superintendent at Broken Tee Golf Course.

Meanwhile, his younger brother was traveling a similar path.

Marty Savage always was enthralled by diamonds. Baseball diamonds, that is.

“Growing up, when I went to a baseball game, I always wondered how they made the field look that good,” Marty said. “So when Mitch got his job at the golf course, it intrigued me how perfect they would make it look.”

So Marty followed in his other brother’s footsteps, taking a job at North Branch Golf Course while in high school, then spending two years at Cambridge Community College while continuing to work at North Branch Golf Club as a freshman before following superintendent Jake Warneke to Purple Hawk as a sophomore. He then completed his schooling at the University of Minnesota.

Marty’s internship after his junior year was at Hazeltine National Golf Course in Chaska, which hosted the PGA Championship. After graduation from Minnesota in 2010, Marty’s career nearly went a different path than his older brother took.

“Coming out of college, I was offered the second assistant position at Target Field,” Marty said. “I always had that in my mind. Whenever we went to baseball games at Minnesota, I was fascinated by how great the field looked, so I almost went that direction.”

Instead Marty went west after the superintendent at Denver Country Club – where Mitch was working, and he encouraged Marty to apply for a job there. Marty got that job and worked there for a couple of years before taking a job at Cherry Hills.

Marty then became the assistant superintendent at Sanctuary Golf Course in Sedalia, Colorado, which he said was a unique experience.

“That golf course was built specifically for charity,” he said. “The founders of ReMax built the course, and everything they do there involves donations to charity. In 20 years of existence, that course has raised $100 million for charity.”

When Mitch moved to Broken Tee in 2018, Marty took his place as Green Valley. And earlier this year, Marty got his first superintendent’s job when he filled Mitch’s position at Broken Tee.

Sharing more than a job

Most people view the role of a golf course superintendent along the lines of the role Bill Murray played in Caddyshack: the superintendent is the guy who makes sure to “grow and mow” the grass.

Neither Mitch nor Marty Savage view the job that way.

“The people who hired me to lead the grounds crew have entrusted me with a budget that pushes $1 million and to lead a team of 10-20 people, working with expensive machinery to provide the best surface for a golfer,” Mitch Savage said. “But we try to do that in a way that’s environmentally friendly so the surrounding ecosystem and wildlife aren’t affected negatively.”

Marty Savage said his view of the job is more like the role of the Wizard in “The Wizard of Oz” than Murray’s role in Caddyshack.

“Anything outside of the golf shop, whether it’s facility management or turf management, is my responsibility,” he said. “One aspect they don’t teach you in college is people management – we’re viewed as the problem solvers. When something happens, we’re usually the people they call. I try to get my hands dirty every single day, but 90 percent of my job is checking on the people who are out there producing the end result.”

When two brother share the same responsibility, you might think they spend countless hours talking about the job.

In the case of the Savage brothers, you would be wrong.

“It can be odd, because everyone thinks Mitch and I talk on the phone about work all the time,” Marty said. “We very rarely, if ever, talk about work. If he calls me, it’s something about family. You know those people who talk about work whenever you go out? We’re just not like that.”

What’s more, knowing that they often are vying for the same position has brought them closer together. Earlier this year, when Mitch was hired as the head superintendent at CommonGround, his chief competitor for that job was his brother Marty.

“It’s hard for me when I know we’re competing for the same job,” Mitch said. “I hate it, because I hate competing against my brother. I’m fairly certain that, if I had not been offered my last job, they would have offered it to him. And that tore at my insides – I potentially robbed him of his first job as superintendent.

“Maybe some brothers who are more competitive would foam at the mouth to have that competition. But that’s not how Marty and I are; we grew up as best friends. But it worked out for him – I got the job at CommonGround, but Marty replaced me as superintendent at Broken Tee.”

Marty agreed, adding: “That sucked – it’s not fun to interview against your brother. It’s not easy. It was bittersweet: I wanted my brother to win the job, but I also wanted to get the job myself. It’s not something I want to do again.”

While that may happen in the future, both Marty and Mitch thanked their parents, father Mark – who served as a physical education teacher at North Branch High School for 33 years before retiring in 2018 – and mother Pam, for forging tight bonds within the family.

“We wouldn’t be anywhere without them,” Marty said of their parents. “And our entire family helped us, from grandparents down to wife and kids.”

Both had some familiar names to thank for their rise up the professional ladder.

“Mike McDougall gave me my first job, and he’s the reason I am here today,” Mitch said. “Whenever I get the opportunity, I try to thank him. And Jake Warneke was a grounds crew employee at North Branch who now is the superintendent at Purple Hawk, and both Marty and I have great memories of working with Jake.”

Marty began his career with Warneke at North Branch, and he continued to work with Warneke after the latter moved to Purple Hawk.

“He taught me you can be a friend and a boss at the same time, and I carry that with me to this day,” Marty said of Warneke. “And I thank Mitch for being a sounding board when I decided to enter this field.”

That mutual admiration between brothers extends both ways.

“But one of the most rewarding things is that we have both elevated one another in the profession. I find it really cool.”